Fab 5? Is it a game where you completely change the looks of straight soccer players?

It's just 5-a-side football, with 24 famous footballers to choose from ...

just what we need, another soccer game on the DS
C

WiFi is for multiplayer ...

oh. playing soccer games over the internet? someone wanna try it with me?

When I first saw the title I thought it was a soccer game starring rappers. D'oh!

Another sign of the impending apocalypse. This is one of the worst games ever from a graphics standpoint. And they claim to have 24 "superstars", and Ronaldo is nowhere to be found (for those of you typical American soccer morons, he's only the best forward/goal scorer in the world right now playing on one of the best teams, Manchester United), which makes this go down another couple of notches in my book.

But I have to admit, it is kinda fun to play. It isn't nearly as complex as some of the other games like FIFA 2008, but it obviously wasn't meant to be. It's a more relaxed pick-up-game style. You just keep thinking that any second, one of these top-heavy players (their heads are abnormally HUGE) are going to tip over! Again, it isn't a very good game. I'm sure unless you actually like soccer, you probably won't like it at all.

TrolleyDave said:
When I first saw the title I thought it was a soccer game starring rappers. D'oh!
Click to expand...

BTW, is this game serious soccer or is more a Sega Soccer Slam kinda game?

kinda both
the soccer characters are not really humanlike. they remind me of those wii characters you create for wii sports of whatever. like biggish heads, smaller body?
the playing field is really cramped. i-could-shoot-a-goal-from-my-goalie-(i could, but i cant)kinda-close. graphics are so ummm. simple. simple gameplay also

Enough with the off topic posts please!
Stick to discussions about the game!
P

Its by Destineer, they're worse than DSI. Played it for about 25 mins, it was alright and then it got far too easy. I can see people liking this though, but for me I'd rather stick with Fifa, hell Real Football 2008 was better than this.

Oddly for a cheapy DS title it has Online. 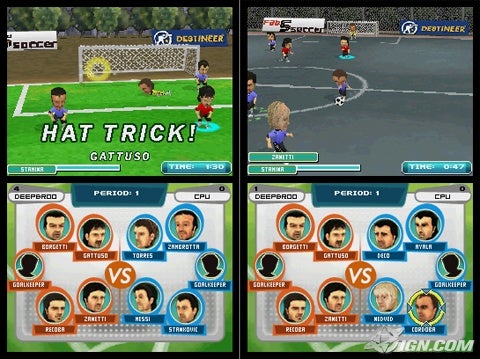 tinymonkeyt said:
kinda both
the soccer characters are not really humanlike. they remind me of those wii characters you create for wii sports of whatever. like biggish heads, smaller body?
Click to expand...

Hadrian said:
Oddly for a cheapy DS title it has Online.
Click to expand...

Expect to see this more from bottom-feeder developers ...

Look at what adding awesome voice chat did for Diary Girl ...

Crap Merchants like Destineer have figured out that if they stick a WiFi mode on every game, that they can squeeze a few more sales out ...

lol bad comments from hadrian... will skip it
Beginning to like FIFA 2008 but it just has to improve in it's tackling,passing and shooting technique (ie. the tackling is kinda sticky and the one-two pass is not so well timed and also the shooting is as if it's randomized)

Gaming Can i use "USA" DS game carts in my "EURO" NDS lite?