Isn`t this game suppose to be an Action-RPG...

So is it just dungeon crawling or are there any towns and something like this?

Saw some videos.. looks like Secret of Mana..
J 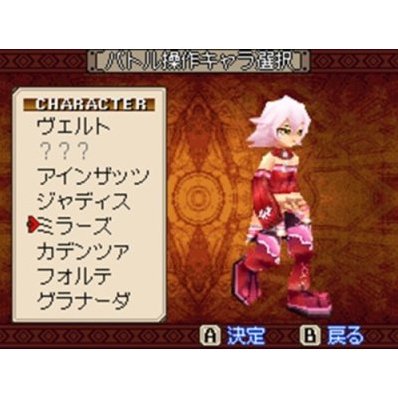 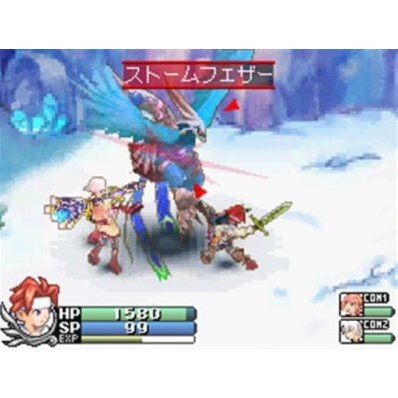 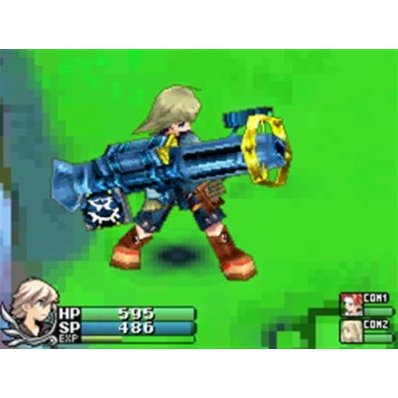 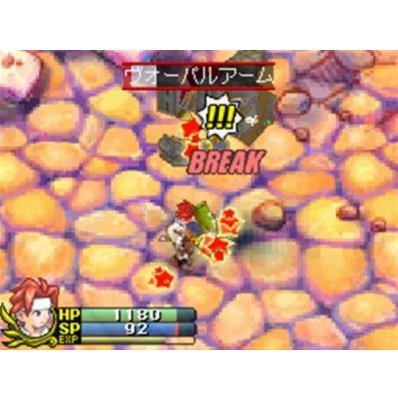 But the game is gorgeous, and I think if the game sees a western localization, RPG fans will go nuts for this game. So far, it's kind of like a mix of Diablo and Final Fantasy VII. The gameplay is very much like Diablo, and you even get to pick what character you want, what class they will be, and their weapon set-up. However, monsters don't seem to re-spawn the way they do in Diablo or most other RPGs, for that matter. Why like FFVII? Well, though I don't understand any of the text, the characters seem to be somewhat modeled after the characters from FFVII, and story is definitely going to be a huge, huge part of this game. It's not a mindless dungeon-crawling hack & slash, ala Dungeon Explorer. This is the real deal.

BTW, did I mention the game is gorgeous?! Polish up the wazoo, and Monolith really seems to have considered everything a player would want for this type of game. A real-time mini map on the touch screen, tons of options and customizability -- the works.
S

Mind uploading that? Most of us don't have Usenet :[

Wait, are you implying that the game has English subbing as a hidden option and you can unlock it with a patch? Sorry if I sound like a noob, but this game looks fantastic and I can't wait.
K

I think he was just being sarcastic, guys.
C

so, any chance at all of being able to play this without knowing any japanese?
K

Just had a quick run on this, it looks absolutely beautiful and I can't stop thinking the FF remakes should have been in this style, with 2D backgrounds and 3D characters, everything is so gorgeous and smooth. Too bad I can't understand a thing to play further.

This does indeed look like a nice game, but I'll wait for a (U) or (E) release. I can't stand looking at all that Japanese text.....looks like a bunch of TV antennas.....or chicken scratch....or something.

Nice thing to put on my MicroSd after I finish TokiMemo ^^

The graphics look pretty, I hope the gameplay to be as good, if not better.

I can't wait to get my hands on this. Looks like the best game in a long time.

Can people please give some impressions on how hard it is to play with no Japanese knowledge? Are the menus and configuration fairly straight forward for an RPG, or is it too hard to get very far? Thanks.

I know I'll end up trying it anyway. I just want to "see" it, if nothing else.
S

Can people please give some impressions on how hard it is to play with no Japanese knowledge?Â Are the menus and configuration fairly straight forward for an RPG, or is it too hard to get very far?Â Thanks.

I know I'll end up trying it anyway.Â I just want to "see" it, if nothing else.

By the way, I don't know Japanese
H

NFO is all messed up... Looks like some stray HTML got in there

Man this is hard. The first mini-boss is a penguin that can rape your ass. He brought me down to 30 HP twice T.T
Also, there's a cooldown on potions. That will be a nuisance later.
D

If someone want to get inside the filesystem, this game is tricky.
Extract it with DSlazy or ndstool : you'll see only one file data/data.srl
This file itself is the real rom of the game, unpack it with ndstool or dslazy.
The text is in shift-jis with some html like code (like
for breaks) it's located in the data/menu directory.

Has anyone flashed this beta DS firmware?

@ M4x1mumReZ: What did you do this time, Kenny? A moment ago
Chat 1