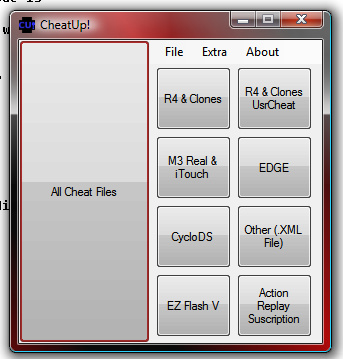 CheatUp is a program that lets you automatically update your cheats from the official thread at Cheats.GBAtemp.net. It also has other functions, such as being able to show you the changelog and gamelist and to use it just click the cheatfile you want to download.

Please read the help and readme before asking questions.

1.00 Final
-Fixed some spelling errors
-removed a TON of unneccessary code
-Looking for a host, Narin or Costello

0.98 Final Rev 2 Build 1:
-Removed all the R4 Shovelware Crap
-Sending to Narin, Could be released today!

0.98 Final Rev 1 Build 28:
- I hate Vista! Stupid thing makes it harder to compile anything!
- Removed a lot of potential security threats/holes
- Fixed it to work with .NET Framework 2, instead of 3.5.
- Removed the flashcard buyer as it may stop GBAtemp getting income from referals.
- Added a donation section, for people who like the app.
- Made it a heck of a lot smaller (what? 20 kilobytes is smaller when its only 190kb to start with)
- Added a GBA cheats downloader into the "file" menu
- Fixed the Action Replay Code Manager suscription option. It now has a mini-tutorial on how to suscribe.
- Changed the licence from GNU-GPL to just free software. Mainly as if I release the source, leechers will
terminate the licence and destroy the database.
seriously, I see links passed around for the database on pretty much ever other site I see.
If I released it under the GNU GPL or even the GNU LPL, I would have to include the source. By doing so, I create the possibility
of people stealing credit for the database, and codes within therefore
breaching the licence of the codes within the database.
Now you understand..
- Removed the splash screen as it makes the loading time longer.
- Fixed the GUI so that all the windows/dialogs are the same.

0.98 Final:
- All necessary features finished and added, and testing revealed no issues...
- Bugfix with downloading problems... yet again... It works now!
- Sending to Narin for approval... Hopefully I'll be able to add in the last few features... and I'm looking at DSAutoTrainerMaker
Integration!

0.96 Beta:
- Added the extra's section with the credits, changelog, gamelist donation button, and the flashard buyer.

0.6 Stable:
- It downloads files... what more can I say...
- Bugfix so that it actually DOWNLOADS the files, and also asks user where to save them...

0.0.8 Stable:
- Seems to be going fine so far... appears to download files, but I really need to test if it actually does...
- Added a GUI
- Added a theme and logo's, basic, yet better than some wannabe graphics artists I've seen.

Discuss (Thanks to Antoligy for submitting)