As a long time fan of Dungeons & Dragons, both as a player and as a dungeon master, I’ve found that I prefer in person play over online any day of the week. Sure, the likes of Zoom, D&D Beyond and Roll20 make playing online easier but in my opinion, none of these have ever come close to matching the immersion and fun of a really solid in-person game. Most of this, I’d say, comes from that lack of immersion; there just isn’t the same energy when you’re not in the same room as a group of friends, huddled around a table with a playmat and some minifigures with your favorite copyrighted music setting the scene in the background. One app seeks to change that, by using augmented reality to truly bring your party of friends together for a tabletop role-playing game session that you’ll never forget. Whether in person, or online. That app is Cartographr. 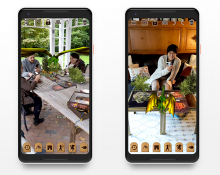 ​
Cartographr’s beginnings came in the fall of 2019, while developer Joanna Liu was researching how people use creative tools to play tabletop games collaboratively, for a thesis paper while studying for her master's degree. The project really got off the ground, however, in February of 2020 as the Covid-19 pandemic started affecting the world at large. With people stuck at home and looking for new ways to play, Liu noticed an uptick in folks trying out D&D online and got to thinking about how tabletop gaming could embrace technology going forward, and bring about new ways to play in a user friendly way. Taking inspiration from hologram tables in the likes of Star Trek and Star Wars, Liu began working on Cartographr in its current form. The app distinguishes itself from other augmented reality apps by using Google AR core, allowing fully anchored AR setpieces to integrate into your 3D space, as opposed to using floating stickers that give the appearance of augmented reality but don’t actually anchor the assets in place. The benefit here, Liu says, is a more stable form of augmented reality that allows you to move about in your space and offer some of that immersion that’s so important for fostering engagement within your games. Partial funding for Cartographr came through Kickstarter, where the app received its full ask of $10,000 in just four days, showing just how in demand something like this is amongst TTRPG players.

The app immediately caught my interest with the sheer ambition of its scope alone; using the app, you can leave the battle mats and minis behind when preparing your next TTRPG session. All you’ll need is your phone or tablet, a character sheet, and some dice. Boom, you’re ready to play the game. Game masters can set their scenes in app using pre-generated assets, set out minis to represent each character, and guide their party through a fully realized AR setpiece, offering a new level of immersion and a new way to play these games. I was lucky enough to get to take part in a semi-hands-on demo of the pre-alpha build of Cartographr, led by developer Joanna Liu herself. While I didn’t get to personally use the app, Liu was kind enough to show off and break down the features, before thrusting us into a thirty minute mini-session of Dungeons & Dragons to see this program in its natural environment. I was instantly impressed with how easy the app looked to use; Liu was able to set our marketplace scene in mere minutes, and showed off how you can scale your assets to either fit on a tabletop, or take up a larger footprint in your playing space; for example, she showed us a tree set up in her living room that, despite not being life sized, was absolutely large enough to catch my attention and put me in the view from my character's perspective. This will also give you more options for how you’d like your games to be played; more traditional on a tabletop, or in a larger setting where your players can physically explore the space, adding an element of live action role-playing to your session. Our demo took place over Zoom, where sharing the screen through the phone gave us an in-depth look as Liu operated the app. This, also, was my first exposure to how convenient this tool can be for those trying to play tabletop games online; no longer do you need to spend time getting your space set up and figure out setting up a camera at a view where everyone can see. All that was needed was a clear space on the floor, and the app handled the rest. 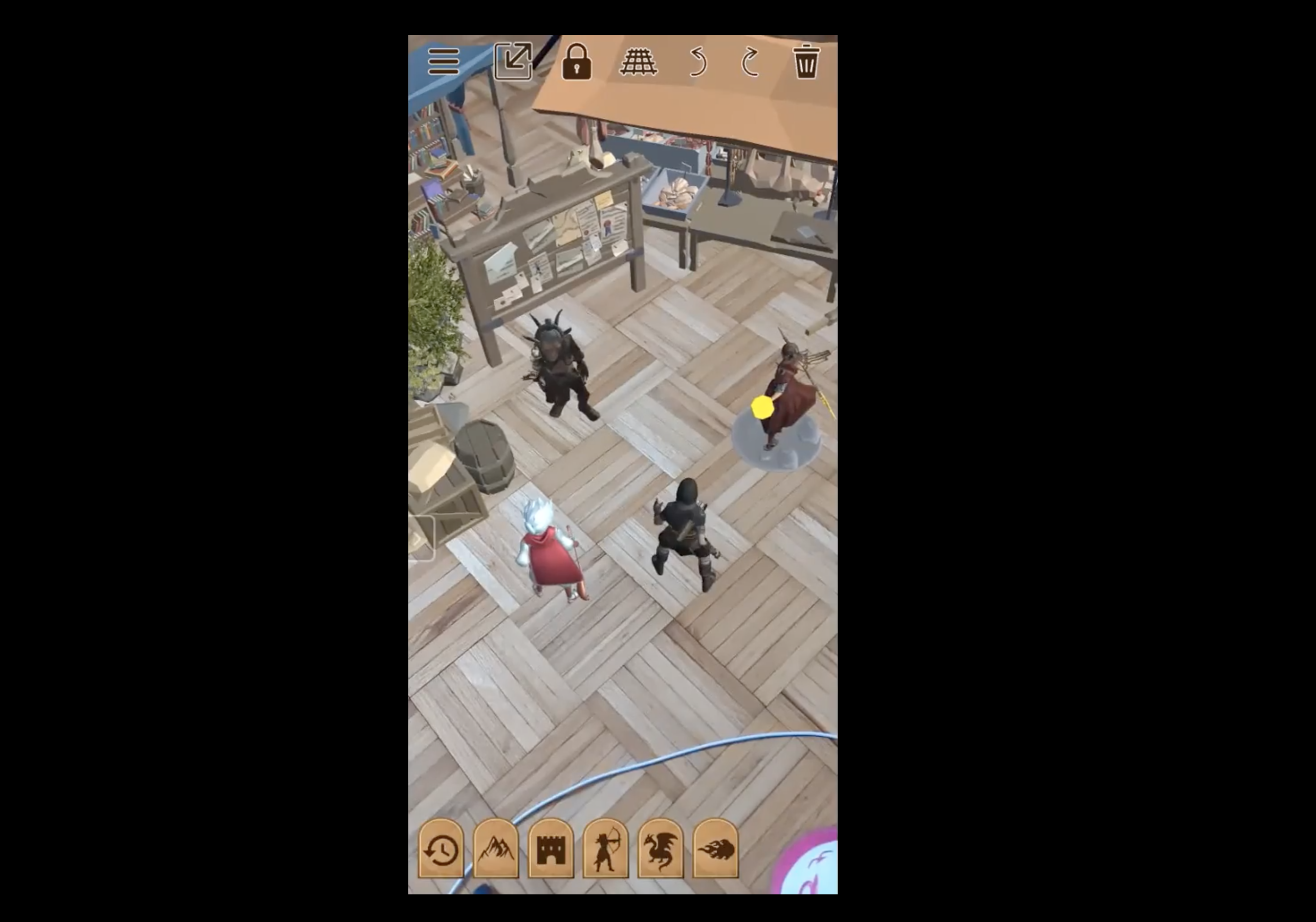 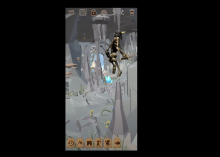 ​
For this demo, being online, we of course couldn’t really explore those LARPing possibilities. We did, however, test this app out in the best way possible: by playing a short session of Dungeons & Dragons, so that those of us taking part in the demo could see how it works firsthand from a player’s perspective, as well as from the GM view that the app offered. What followed might have been the most riveting online session of D&D in my life, despite covering only about thirty minutes of real time. The session saw myself and two other players in a marketplace setting, where we were shown the progression of how gameplay works in the app. Minis are placed within the setting, and can be moved by the DM on the fly. When the party rogue wanted to get high to investigate the marketplace from above, Joanna was able to give the party that “above” view by moving her phone accordingly. The story saw a ghost emerging out of a magic portal, showing us some of the assets for environmental effects and enemies. When fighting the ghost, it was a more traditional experience of simply declaring your attack and rolling the appropriate dice in person rather than through the app. Before the session was over, the party also got a quick glance at a cavern-type map that was completely rendered, and was even more immersive and impressive than the assets set to the ground. Once our session was over, we got to take a look and see that the map was actually a large cavern that naturally obscured itself from view at the game master’s discretion; another hugely useful tool for those running a game--no longer having to worry about accidentally revealing too much of their map, and keeping things hidden naturally.

After the session, I got to talk with Joanna a bit to get an understanding of her development process so far, and where she’s hoping to bring the app from here. While what we saw in the demo was a build for those running the game, a player specific version is also being developed that will eliminate the selection menus from view, so they see only what the GM wants them to see. Players will also be able to move their own in-app avatars rather than requiring the GM to do so. While we didn’t see miniature animations in the demo I was a part of, those animations are being developed and will be able to be selected by each player as well; an example Liu gave was making your character laugh, or having them shoot an arrow in combat. The player version of the app will also place you in the views that your character would see during exploration and combat, to truly put yourself in this world and in your characters shoes, whether playing your game online or in person. And for an extra bit of customization, the app supports the importing of .STL files from miniature-building sites like HeroForge, allowing you to truly bring your character to life in the app. It was also mentioned, however, that Liu is hoping to add a character creator to the app so that animations will be supported, as the imported .STL files will only be static miniatures. 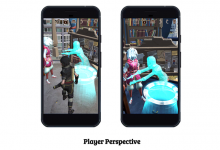 ​
Currently, Liu’s aiming to have an Alpha build of the app released to Kickstarter backers by June, with a beta coming out around October. If all goes well, she’s hoping to have the final build in March of 2022. That said, being a single person development team, this is a best case scenario. Some features that she’s hoping to implement in future builds include a limited PC version of the app, hand tracking straight out of a sci-fi movie, and sound effects and music implemented directly through the app. Liu also recognizes one of the challenges being that this technology is so new, and not many people have a ton of experience or history with true augmented reality, despite the popularity of other AR experiences like Pokemon Go. That said, from what I’ve seen of this technology so far, I’m absolutely impressed with how much progress has been made within the couple years of research and development, and hopeful for its future. I’ll absolutely be continuing to follow the development of this app, with high hopes that it can live up to the scope of Liu’s vision.

If there's one thing I've learned from talking to companies, publishers, and PR, it's to never underestimate those little emails, about indie projects. It was just another email in the pile of dozens that I get a day, and it could have gone ignored, but it looks like it was a fun experience, and something just really neat and unique to have tried out.

I'm not a TTRPG player, so all this would have totally gone over my head had I tried it, but I dunno, it definitely seems like a cute concept!
Reactions: SonyUSA, Julie_Pilgrim, MajinCubyan and 1 other person

Hell yeah, that looks pretty cool. I also prefer in-person tabletop over online but this is awesome. AR as always been kind of an "ehhh" idea but then I see stuff like this and am left thoroughly impressed.

Excited to see where this goes moving forward.
Reactions: Julie_Pilgrim and RyRyIV

Come on, I can't be alone, right?
Reactions: Julie_Pilgrim

While I have never really played D&D I am excited to see augmented actually maybe just about start to amount to something.
Reactions: MajinCubyan, Chary, Julie_Pilgrim and 1 other person


eyeliner said:
TT, get it?

This looks very cool, too bad my phone can’t really do AR...

Eh AR is still a thing in progress. Many people disable the "real world" camera as soon as rhey start the Pokemon Go app as it makes catching Pokemon easier.