About a year ago, my factory default stereo in my Malibu Max 2005 decided that it no longer wished to play CDs. At the time I was a little thing called broke. So I started using a headset.

About a month ago my headset died. While searching for a new one I decided to google laws about headsets and driving. Apparently I was doing something bad and as such I scraped the idea of using a headset. So as of today my parts arrived. I did some basic research and found that to keep my heads up display (miles/temp/oil life/etc) I had to purchase a rather expensive item called a Metra 99-3303. I found it on Amazon for 165$

I didn't care too much about my stereo but I decided something mid range and single din since I was loosing a din to my heads up display. I choose the DEH-X6800BT. It was 95$ before tax. Shipping was free due to Prime.

I honestly have no idea what I am doing so I've been googling like a fiend. I found that I had to solder a wire harness. After two very informative video's I got the gear I didn't already have and got cracking. Here is the harness post solder. I put heat shrink tubing on the solder points. 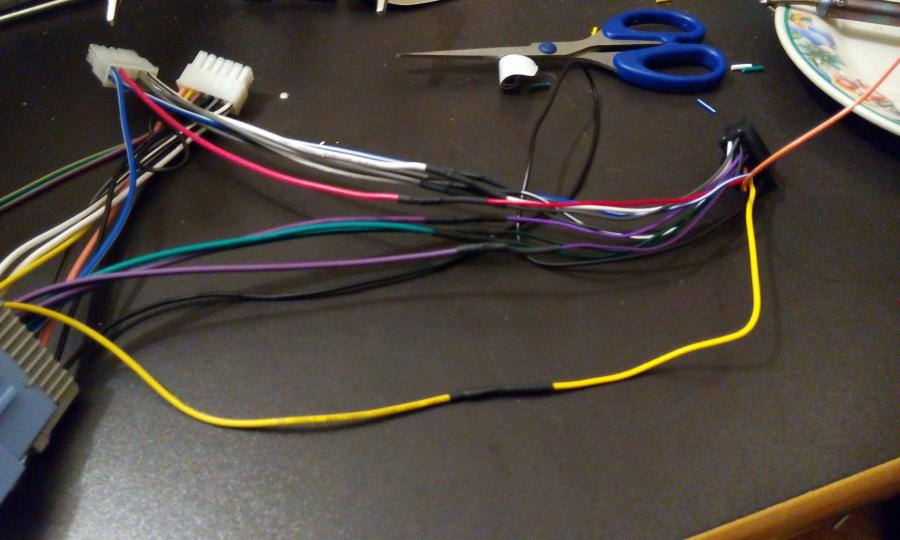 Since my mail carrier is slow as hell and FedEX decided to give my package to the USPS instead of doing delivery themselves, I didn't get the package until after dark. So here is the stuff I'll be installing probably Wednesday since that's my next day off. If I get off early tomorrow I'll do it then. I'll take photos of the dash tear down and try to keep them in focus. 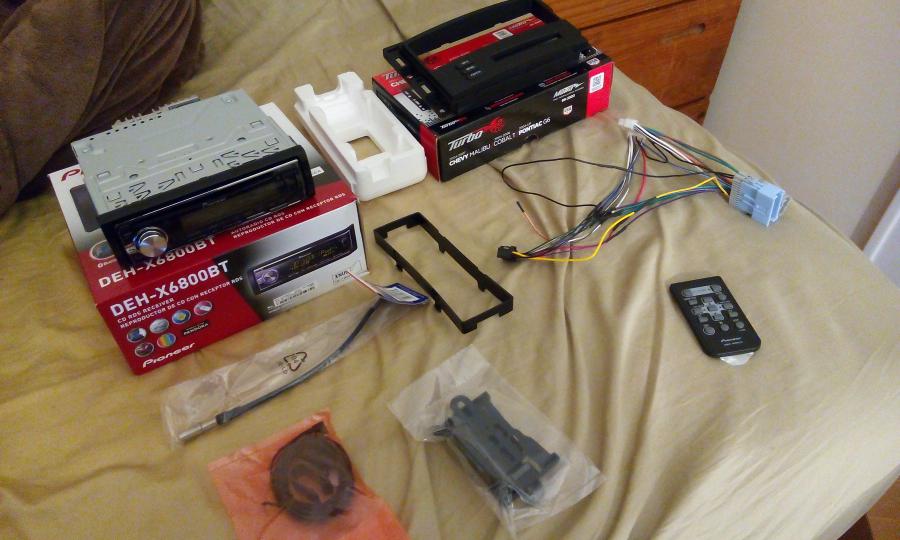 I didn't get the steering wheel control box since all it does is volume control and the box was something like 70$. I'll probably Velcro the remote somewhere easy to grab and use that instead. I'm also going to run the microphone along the dash and clip it just under the steering wheel.

The sad thing about all this is if there would have been an AUX jack on the factory stereo, I wouldn't have to do all of this. Of course now I'll have a ton of features.

I'll add the pictures to this post when I have them.

Update: I installed the stereo the next day after I made this post. At first I didn't have radio. I had hooked the radio wire up incorrectly. I pulled just the stereo out and fix it in a few seconds. After I was done and I unloaded my pictures I realized I didn't have any of the completely torn down dash. Oh well. The process worked great. In the future I may add steering wheel controls. Until then, here are a few pics of some of the tear down and the final install.

Some people doing this have been known to burn a fully blank audio CD as most CD players will not play without reading something, this would probably not work for you but dodging this is usually a matter of soldering maybe a single connector somewhere obvious if you think about it/look up a few chip pinouts. If for some reason you were apprehensive -- it was broken anyway, you were not going to break it more.

Alternatively
http://www.amazon.com/Transmitter-JETech®-Wireless-Charger-Samsung/dp/B00URUJWPW/
They actually do pretty well these days. The early ones were worse than a bad cassette adapter but I have been playing with a few different cheapo Chinese ones of late and they work just fine. I do not know the US regs on such things mind you but I have not heard anything bad.

Anyway I will have to look further into this as I always seem to be the one lumped with annoying radio installs/repairs (I will spare the war stories for now other than to say it is nice when the factory diagrams do not have errors) and I imagine I will have something like this in the years to come. Hopefully I will not find that you did not in fact need the adapter kit you mention -- the car audio forums quite often have told me that I need a £30 or worse adapter kit when a wiring diagram (or even the wire colours on the back of the scrapped radio) and thinking for 2 minutes allow me to solder in a standard iso connector.

@ KennieDaMeanie: I own a wiiu it's just helping collect dust in my bedroom 2 minutes ago
Chat 4