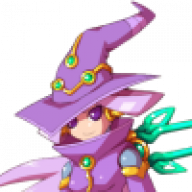 So, for the past half a year, I've been going around trying to figure out which font Golden Sun Dark Dawn uses in its encyclopedia and speech bubbles, but to no avail. I've tried to contact Nintendo about which font they use, but they only gave me the runaround, with generic replies like "we can't just process every question we get" and stuff like that. As such, my hand is forced to try and find other means by which to attain this font.

Apparently, those have not been very successful either... It appears that Dark Dawn is a pain in the butt for rippers, and the font viewing tools I've found unfortunately don't seem to work with this game. As a direct result, I've gone from place to place trying to find out if someone knows how to nab that freaking font, as I'd very much like to use it for a fanforum project I'm working on. I'd be very grateful if I could get some advice and assistance in getting ahold of the fonts.

Thank you for your time and assistance.

Looks like a fairly standard font if 8:15 and around there of

is anything to go by.

Still I poked around and the game appears to have 15 or so things named font but before I get into that I might have drummed it up (top right, looking at the lower case y, g and t although top left looks to be a smaller variation).

I forgot what file I got that from already (2am and all that) but it was sourced from the datafont directory. Edit- it was kiaro1212.dat
The files are LZ compressed using the rarer type 40 compression (many things can handle it these days but for this I used http://gbatemp.net/t...ba-compressors/ (you want the LZX command). They have the extension .dat but they are in fact the NFTR font (RTFN being the first few bytes being the big clue) and seem to decode OK using
http://gbatemp.net/t...60-nftr-editor/ (it is what gave that shot above) 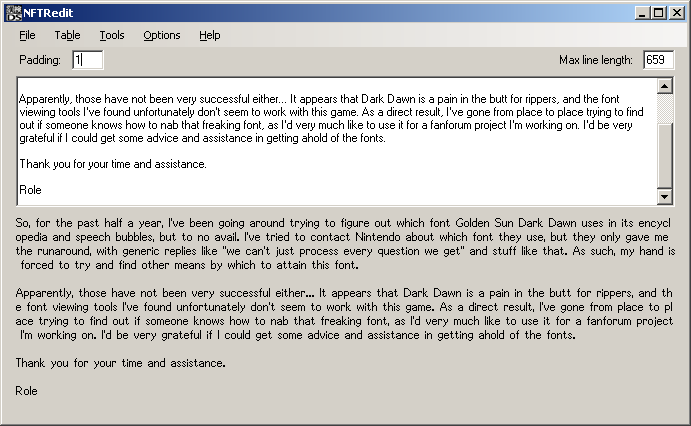 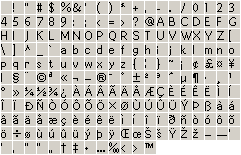 Oh... oh wow... Thank you, that... wow. I wish I had found you guys a long time ago... I never expected the first post to solve all those issues for me.

I guess the only thing left is to ask if you happen to know someone who can convert it into a .ttf or similar.

Thank you so, SO much, you made this girl quite happy today.

Hold on, the font you provided wasn't the one I was looking for - the one I need was on the top left. Rather than have you just do it again and post it for me, could you instead teach me how to do it myself? I'm trying figure it out from what you said in your post, but... eeeh, I'm a bit confused and can't seem to get it to work...

Which tools did you use?

get yourself an lz type 40 decompressor(linked in fast's post). then search for the "40" signature or just decompress it straight up. Since I don't have that game. I can't really go into detail. You may have to cut up the file and decompress those chunks or you may just need to decompress the whole thing and maybe then cut it up into chunks(which I doubt from what fast seems to be saying the kaira file seems to be a compressed nftr). Those chunks/ that file being the nftr/rftn file(s) fast was talking about. by cut up I mean use a file splitter or manually copy and paste the hex to/from files.

First try to decompress the file all together with the LZx command then rename the file after decompression to have the nftr extension. Then open said file in nftr editor, tinke or crystaltile2. if that doesn't work then more than likely there are several files in there. then cut the file up (after finding the start (and end)of the files with a search for "rftn") and open those new files as nftr('s).

I think i skipped a step or two or may not have gone into enough detail... meh...

Yeah the top left and top right ones seem to be differently sized versions of the same font- both had kiaro in the name.

You need to get the files out of the rom. There are almost countless tools to do this- I probably used crystaltile2 but ndstool, ndsts, tinke and nitro explorer are just a few of the tools that can parse the DS file system. Most of those are fairly obvious or include some usage on the links (for crystaltile2 click on the little DS icon that should be around the right of the menus and icons and then when you find the file in the new windows right click).

Either way you want to go to the data\font directory. If you decompress with ndstool it will make a data directory for everything other than the overlays and binaries so the directory will in fact read data\data\font\
There are a bunch of files with the extension .dat but they are compressed with the rarer/newer type 40 compression (tinke probably does though). So grab them and then you will need to feed them to a decompression tool.
As mentioned the compression is somewhat newer than many tools which includes crystaltile2 but the lzx program from CUE's GBA/DS compressors* (filetrip link) and DSdecmp are a couple of the tools that can handle it and most other compression methods seen on the DS (certainly all the common ones and there is so very little custom stuff these days). They are command line for the most part but fairly simple to use.

After this you need something to parse the NFTR font format for which you have a few options. Some are will parse the file anyway but if you can give the files the nftr extension if it did not have it already that would be good. I suspect the one you want is "kiaro1010.nftr".

NFTR editor (filetrip link is what I used for the original reply. You can open it in it and then click on the tools dropdown menu or file dropdown menu -> dump tiles (and be given the option of to bitmap or to clipboard) which is what gave that final image.

tinke
If you are playing along with it you probably would not have had to leave the program as it can handle everything done today- parse filesystems, handle type 40 compression and view/edit NFTR fonts.

crystaltile2 has abilities here as well.


As for the last question I do not know any tools to convert fonts and the ones I had a go with aiming to trace them by hand were not very stable; fonts on computers this side of the early 1990's at the latest are vector graphics by nature and have a whole lot of additional info (which actually NFTR does have but nobody has really made export options that would be useful to conventional font making) where these are bitmap fonts. Font making is as much a skill as image editing, video editing, audio composing and audio mastering and I am afraid I just about know the basics of how fonts work (on a good day I might be able to recall most of http://freetype.sourceforge.net/freetype2/docs/glyphs/Image3.png ) so I will have to defer to others.


*a little batch file to get Cue's tools working and produce uncompressed files named nftr. It should not matter if you do not have all the files, basic usage is paste the codebox section into a text file and save it with the extension .bat , stick it in the same directory as the fonts you grabbed with whatever and also stick the lzx.exe from Cue's tools in there before double clicking on the .bat file and then it will run doing it all for you. If you really want ndstool could be added in as well and snatch the files from the rom but it is probably best if you know how to grab files from the DS filesystem.

I've got Tinke and DSLazy, both programs recommended before to me. I've also got the NFTR Editor - my failure with these led to my first post in the topic in the first place. I also downloaded the lzx decompression thing that was linked in the post that included the samples, but I couldn't figure out how to make it work. Trying to open, draging and dropping the font files into it didn't work, and command prompt didn't recognize the command. So basically, I've got the tools I need... but no idea how to use them. It's like giving a musician a scalpel and telling them to start operating. It's just not gonna happen without the right training...

So Rastan... that general knowledge is going in one ear and out the other. You're saying to do things, and I'm all "I'm asking how to do that, you know."

Now, Fast's post on the other hand, that's what I'm looking for. Apparently, I wasn't thinking to add the .exe in the command prompt attempt, trying to use it as a command instead. Also didn't think to try renaming them either - so I'll try those two steps out and edit in my response. Thanks for the help.

Edit: It worked like a charm! Thank you SO much! Now I can provide these to the guy making the fonts... over half a year of searching for this thing and it's finally paid off. Thank you, I really mean it.

Hacking Help needed for modifying the font for Sonic Rivals