Anbernic’s latest handheld, the RG351P, is finally available to purchase and is a device that was quite anticipated by the retro gaming community. This is mainly due to Anbernic’s track record with robust hardware design, frequent software updates and strong community support. Their latest handheld sports the RockChip RK3326 processor which has defined the “new generation” among retro handhelds.

For more details about this specific device's specs, see below: 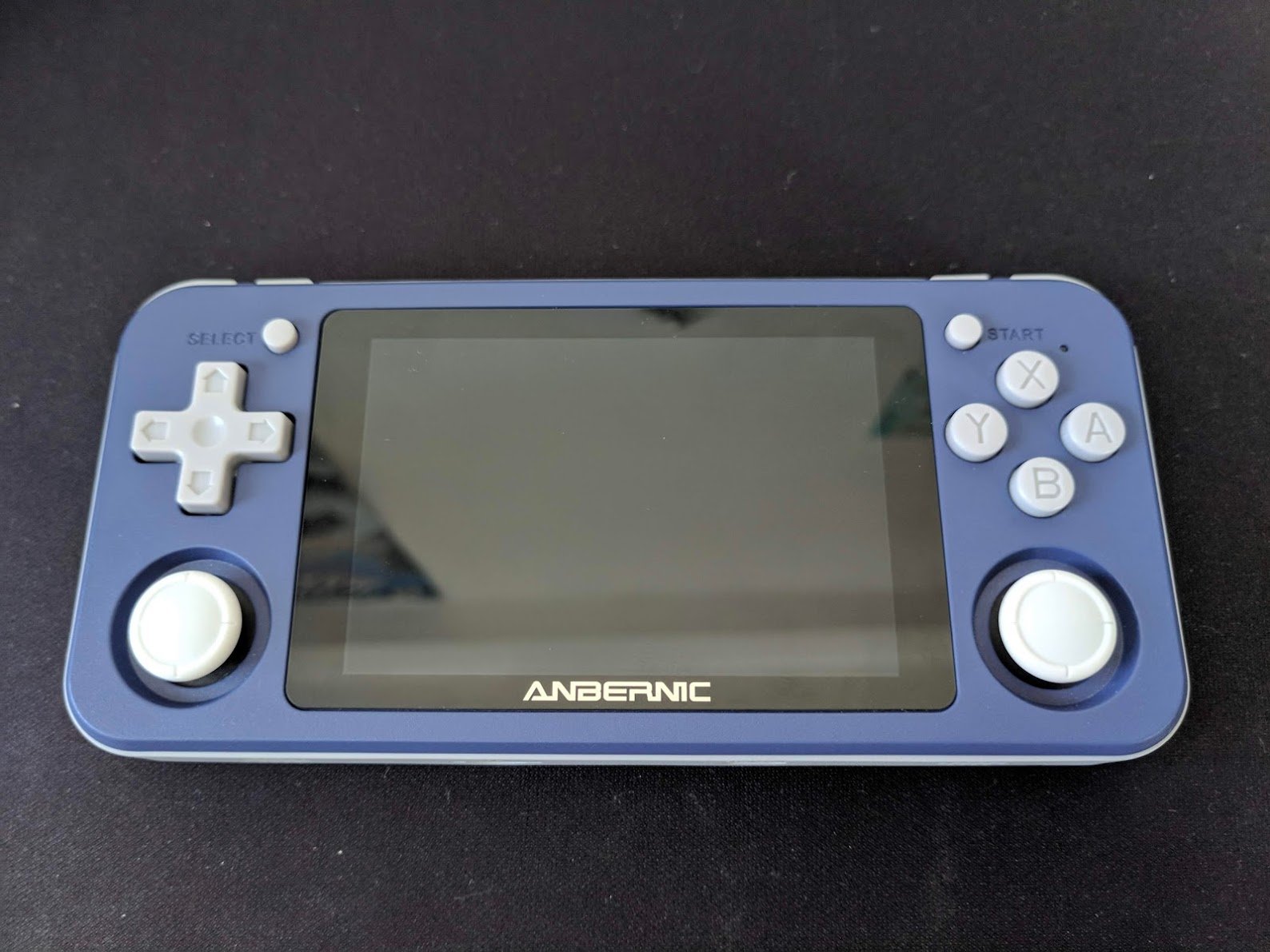 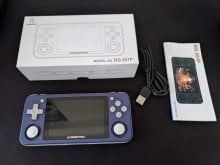 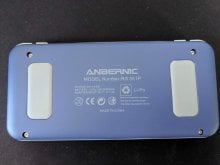 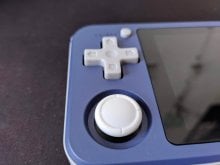 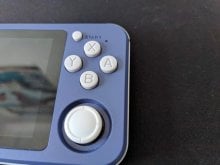 ​
BittBoy’s RK2020 is also based on the RK3326 chip but has several hardware issues that can’t be overlooked as I pointed out in my review. In that aspect, the RG351P is far better as Anbernic yet again makes a strong impression on the hardware front. If you’ve tried Anbernic’s previous device, the RG350P, you’ll know what to expect: face buttons with a pleasant, soft feedback; rubber grips at the back for added comfort; clicky shoulder buttons; and clicky analog sticks. However, I found the latter’s color to be a bit offset as they are white (in the “GBA Blue” model I received) while the rest of the buttons (face, shoulder, power, reset) are grey-colored (as is the side bezel). I don’t mind it much but if you’re nitpicky about the color scheme, this could bother you.

Comparing it to the RG350P, the RG351P is slightly heavier and is slightly shorter while being slightly longer than its predecessor. 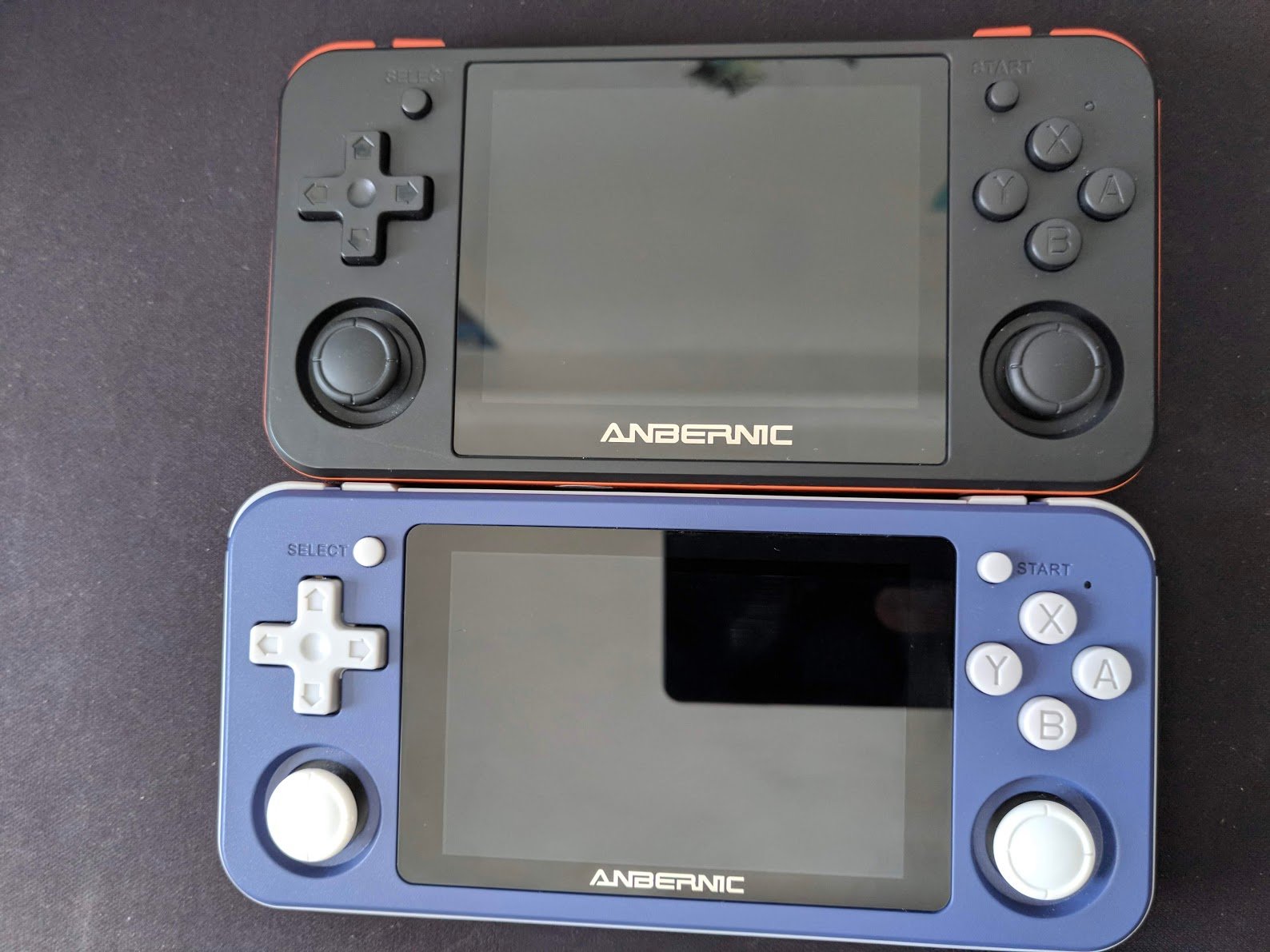 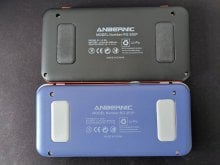 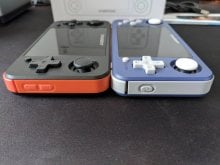 ​
Thankfully, Anbernic included a retro-styled volume wheel which was missing from the RK2020 which has to rely on hotkeys. I really like the choice of a volume wheel, rather than buttons like with the RG350P, as this hardware is rather rare in handhelds these days and really adds to the nostalgia feeling. However, it’s more of a personal preference and I can see others looking for buttons instead. 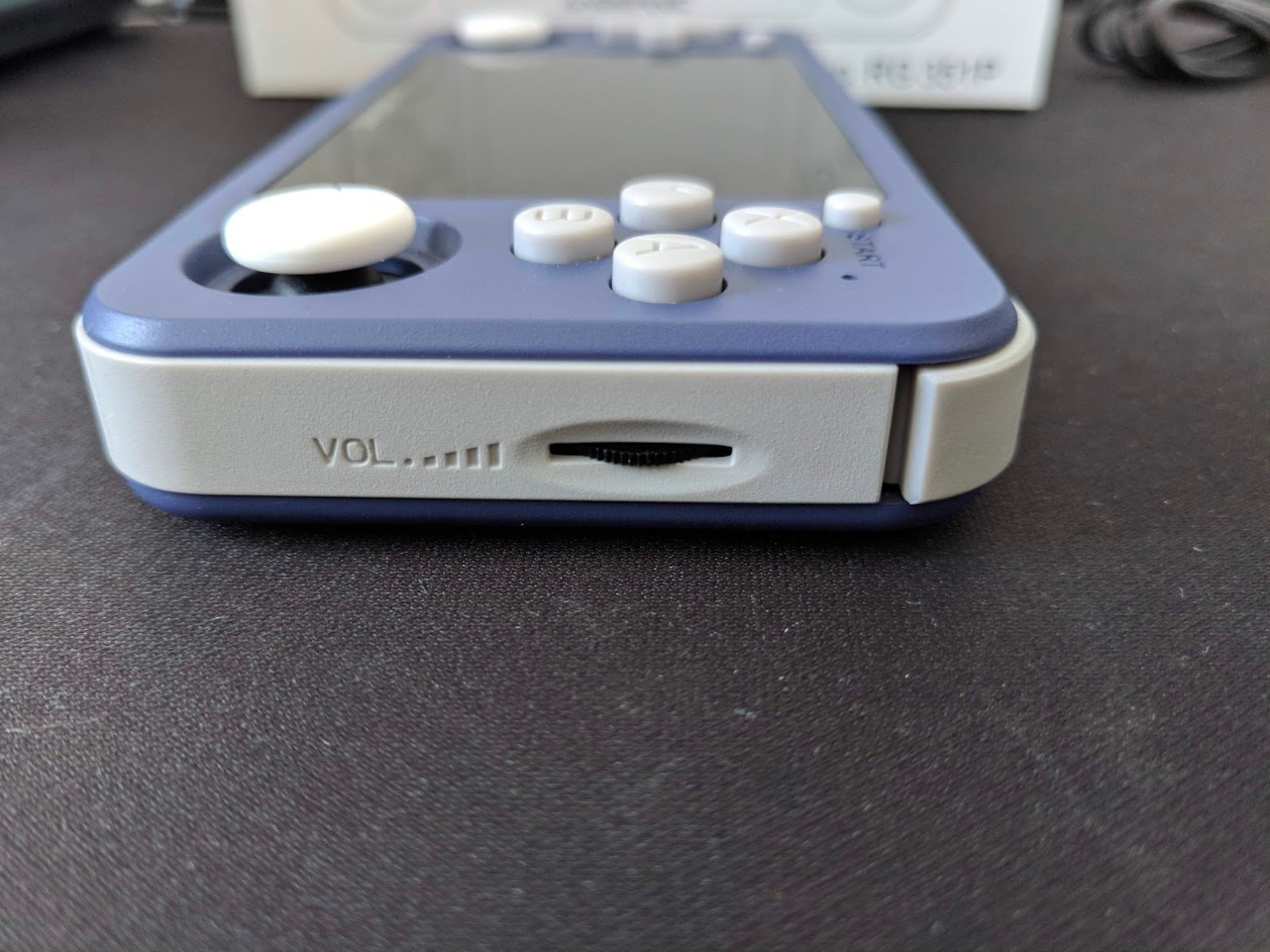 Another deviation from Anbernic is the removal of the HDMI port. While I use these handhelds only in handheld mode, others might still want to hook up the device to an HDMI monitor to game retro on a big screen but this is a missing feature from the RG351P. Moreover, the screws aren’t regular Philips ones but Torx screws whose screwdrivers aren’t as widely adopted. I found this to be rather counterintuitive for an open-source handheld device as it hinders easy access to the internals to, say, change the buttons or analog sticks. 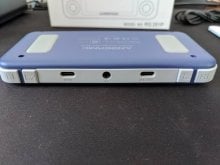 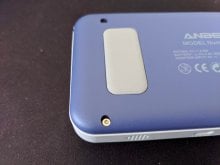 ​
One more thing to note about the hardware is that all models, except for the first batch that shipped, don’t have WiFi function. This was also an anticipated feature to allow easy ROM transfer or for multiplayer but the WiFi module was removed after the first batch (which, on the bright side, helped decrease the price).

All in all, when it comes to RK3326-based retro consoles, the RG351P offers among the best hardware, if not the best. It’s a joy to hold it and play retro games. The device feels sturdy and there’s no rattling or screen bleed as I experienced with the RK2020. 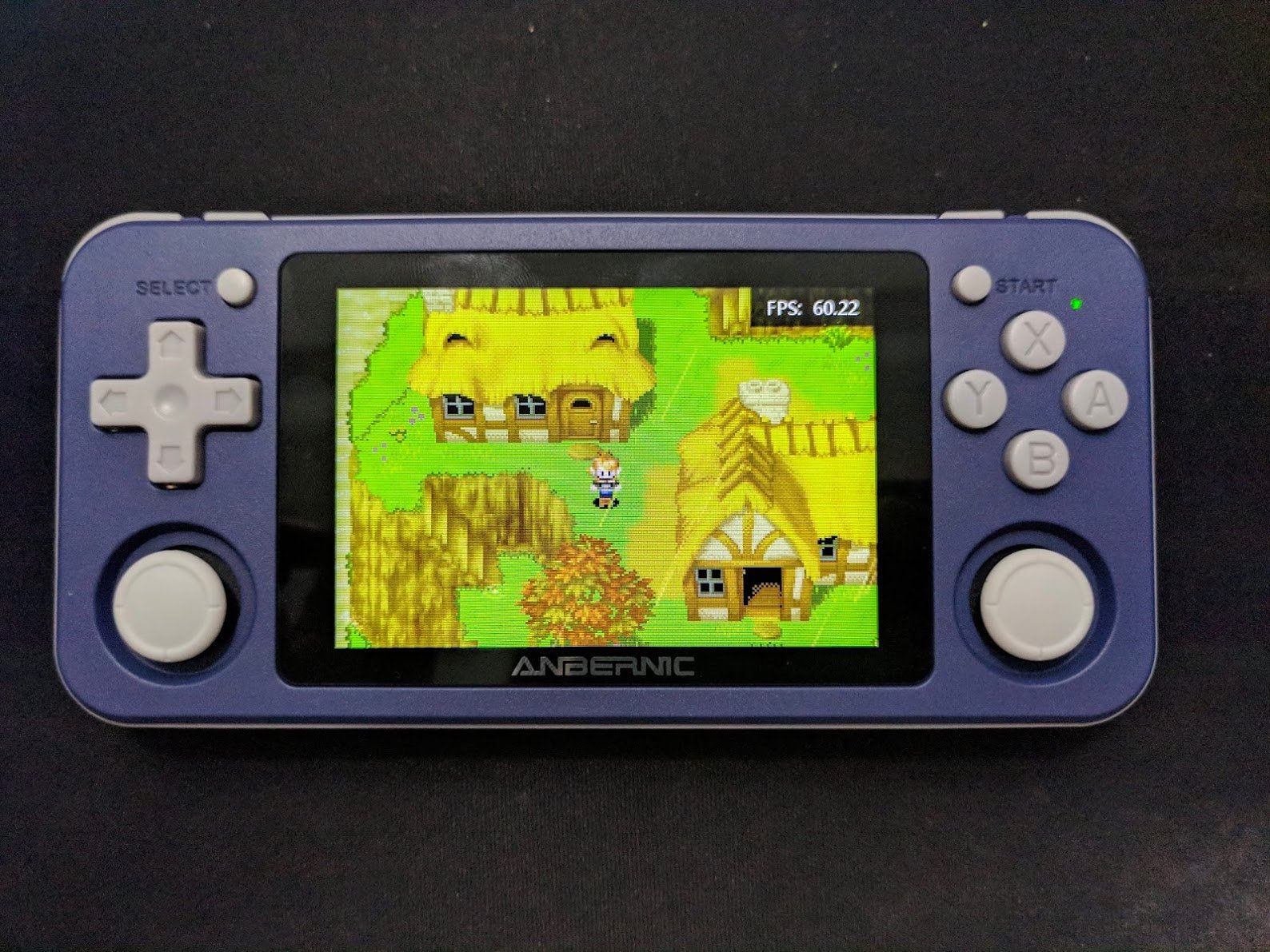 Nevertheless, the RG351P is still based on the RK3326 chip which is more of an incremental update on the previous “generation” of retro handhelds based on the JZ4770 (like the RG350P or New PocketGo V2). Officially, the device is said to support systems including the PSP but in practice, the best supported systems are PS1, N64 and most Dreamcast titles while graphically-demanding PSP games have a choppy performance. NDS games are also playable but the emulator has illegible fonts. What’s really good to play on the RG351P is GBA. This is thanks to its 480x320 resolution, which is 4 times that of the GBA (240x160).

You could tweak the settings and get better performance with each emulator as the OS is based on RetroArch but it has a significant learning curve to it. Additionally, loading ROMs is a whole process if you don’t use a Linux system. You’ll need a third-party software like DiskGenius to access the partition and transfer your ROMs. Upgrading firmware is also finicky, especially given that the RG351P, like the other RK3326 devices, has only one microSD. The RG350P on the other hand had two slots, one for ROMs and the other for the FW but with the RG351P, both FW and ROMs are on the same SD and you’ll have to backup your saves and ROMs whenever you perform a FW update.

And there will be FW updates as there are some issues with the software already. The first batch that shipped, including mine, had an issue with missed D-pad inputs. But this was fixed with an update within one day. Another issue that persists is the brightness level which only changes when it’s below 40%, and before that the brightness setting wouldn't be saved after each reboot. So I've already flashed my unit twice since receiving it and I expect to do more just so that I can really get the most of the device. Thankfully, Anbernic has a strong track record when it comes to supporting its devices and they have developers working on optimized firmware for the device, including an Android-based FW which I'm looking forward to. 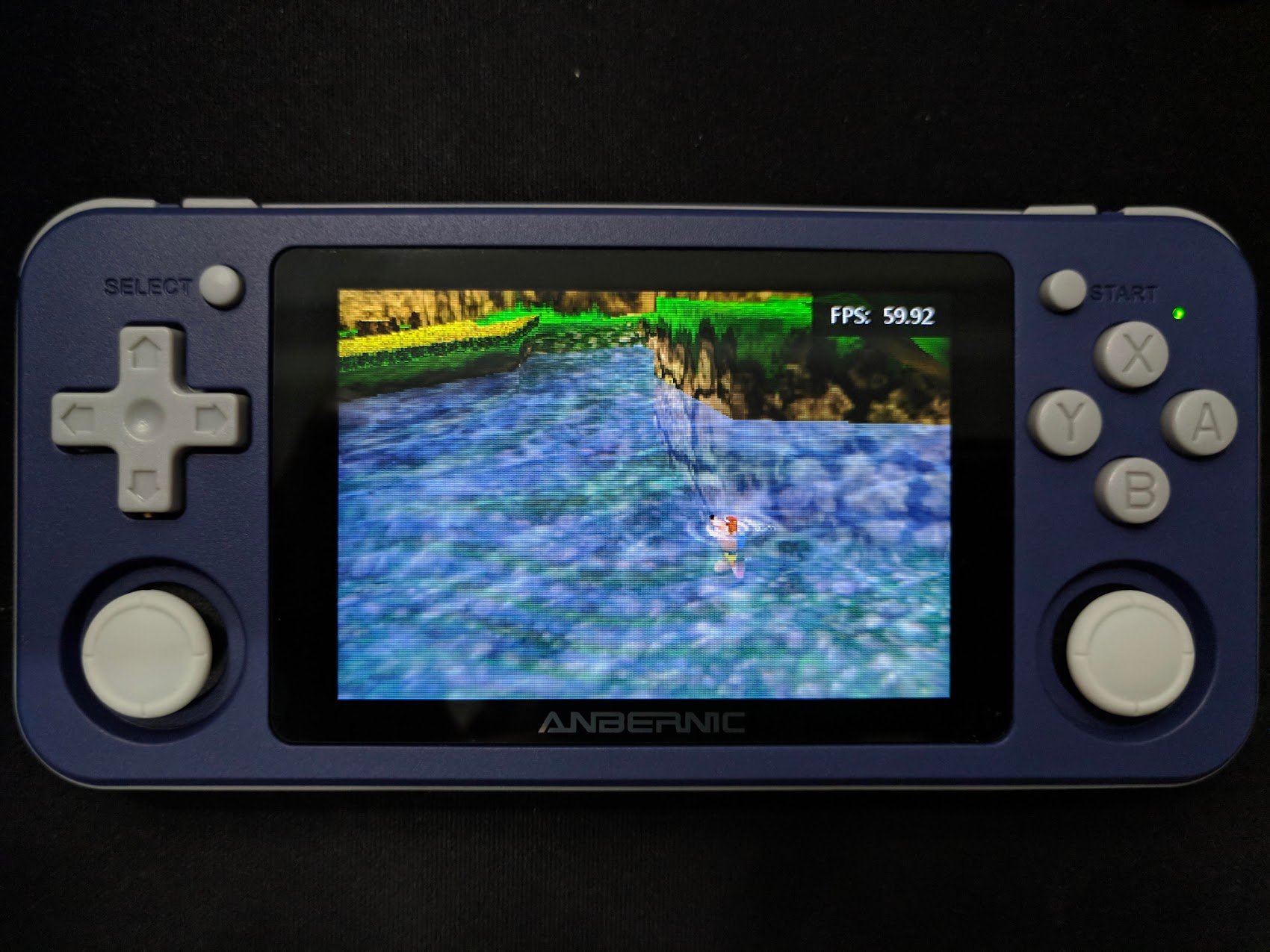 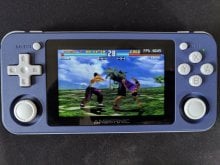 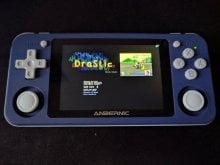 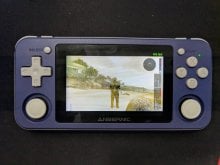 ​
Overall, the RG351P wins it design-wise but the UX is still debatable. It’s likely that it will get better with time, so you can wait and keep track of the progress. That’s what I’ll advise, especially if you have a device in the RG350 line already. If you don’t own one but are looking into the retro handheld market, then the RG351P will deliver but keep in mind that better software will be available only later on. It is priced at $100 and is among the best RK3326 chip-based retro handhelds you'll find out there, especially on the build quality and official support fronts.

Reactions: xstationbr, Yan3, RupeeClock and 11 others
Click to expand...

Prans said:
it's based on RetroArch, so yes
Click to expand...

Well, not sure how RetroArch is on that, but the last time I tried Searching for Cheats, the Cheat Engine in it was messed up. Is it working properly on the Device?
Basically, it got stuck at a certain point, not going Lower, even on the simple Searches.
What is the MAME Version? 2003, 2014, 2016?

Smoker1 said:
Well, not sure how RetroArch is on that, but the last time I tried Searching for Cheats, the Cheat Engine in it was messed up. Is it working properly on the Device?
Basically, it got stuck at a certain point, not going Lower, even on the simple Searches.
What is the MAME Version? 2003, 2014, 2016?
Click to expand...

RA works just fine on the device for the emulators it supports. I don't really use cheats, so can't comment on that but there is a reddit and Discord community where you could ask about those.

as for MAME, I believe it is based on AdvanceMAME
Reactions: Smoker1

i was thinking about getting mysekf one of these handhelds but frankly the more i look at them the worse they seem. PSP or Vita seems like an infinitely better option

I wonder - Do these Devices have any FM Radio Functions? I still have a Dingoo A320 from when the PS3 was Exploitable with it. LOL.

Smoker1 said:
I wonder - Do these Devices have any FM Radio Functions? I still have a Dingoo A320 from when the PS3 was Exploitable with it. LOL.
Click to expand...

no FM radio feature on those I've tested, although it would be a welcome one imo
Reactions: Smoker1 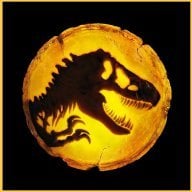 So Retroid PocketGo 2 still the best choice looks like.

It's the 480x360 screen in particular that's got my attention, being perfect for GBA games.
I've had a number of retro handhelds, like the Pocket Go 2 v2 most recently which is reasonably good, but is yet another clone of the GCW Zero from 6-7 years ago. The d-pad was improved over the previous Pocket Go 2 v1 which is usually the sticking point on these systems for me.
Due to their 320x240 screens they always felt best suited to SNES and Megadrive games, whereas this RG351P might not be suited to them because of the 120-136px horizontal gap it'd produce without bilinear filtered upscaling.
Whereas on the other hand, I scarcely play GBA games on the PocketGO for that same reason, plus ReGBA as good as it was for its time, has a number of graphical issues.
Reactions: Prans

Pokemon_Tea_Sea_Jee said:
why did they make this a month after they made the last one
Click to expand...

Probably a few Updates and Upgrades

a month after they made the last one
money grabbing pieces of pure shit.