The retro handheld market is already on its “next-gen” hardware with the likes of the Anbernic RG351P and BittBoy RK200. These sport the RK3326 chip prevalent in this new generation of handhelds. However, these feel more like an incremental update to the previous “generation” handhelds as many demanding games on systems they claim to emulate like the PSP are poorly playable and/or not fully optimized for the system.

In comparison, the last-gen handhelds, like the Anbernic RG350P and BittBoy PocketGo V2 which were based on the JZ4770 processor, could play most of the games of systems they were advertised to emulate from the NES to the PlayStation. And in that generation, Anbernic took the lead with excellent hardware, a strong user base and community support.

Even after its new-gen RG351P was released, Anbernic released a new JZ4770-based device in late 2020, the RG280V. The latter, along with the RG350P and RG350M were the most popular JZ4770-based devices. While technically “last-gen” in the retro handheld market, they still hold up and are worth considering to buy as they perform well, feature a great build quality and are cheaper than the new RK3326 devices. Moreover, there are still promising developments on the software side of things for those JZ4770 devices, as we shall see later in this article.

Primarily, this article will compare the RG280V, RG350P and RG350M which all use the JZ4770 chip. Thus, their performances are practically the same and all have a native 4:3 aspect ratio that’s adequate for most retro consoles. I would encourage you to check my full review of the RG350P to know what to expect performance- and feature-wise from such system. In short: retro systems from the NES to the PSX play smoothly, with the exception of a few PSX games like Bloody Roar II (even SNES games requiring the Super FX chip like Yoshi’s Island that runs at a constant 60 fps). This comparison article will explore how each hardware is unique and for which user it might best be suited for. 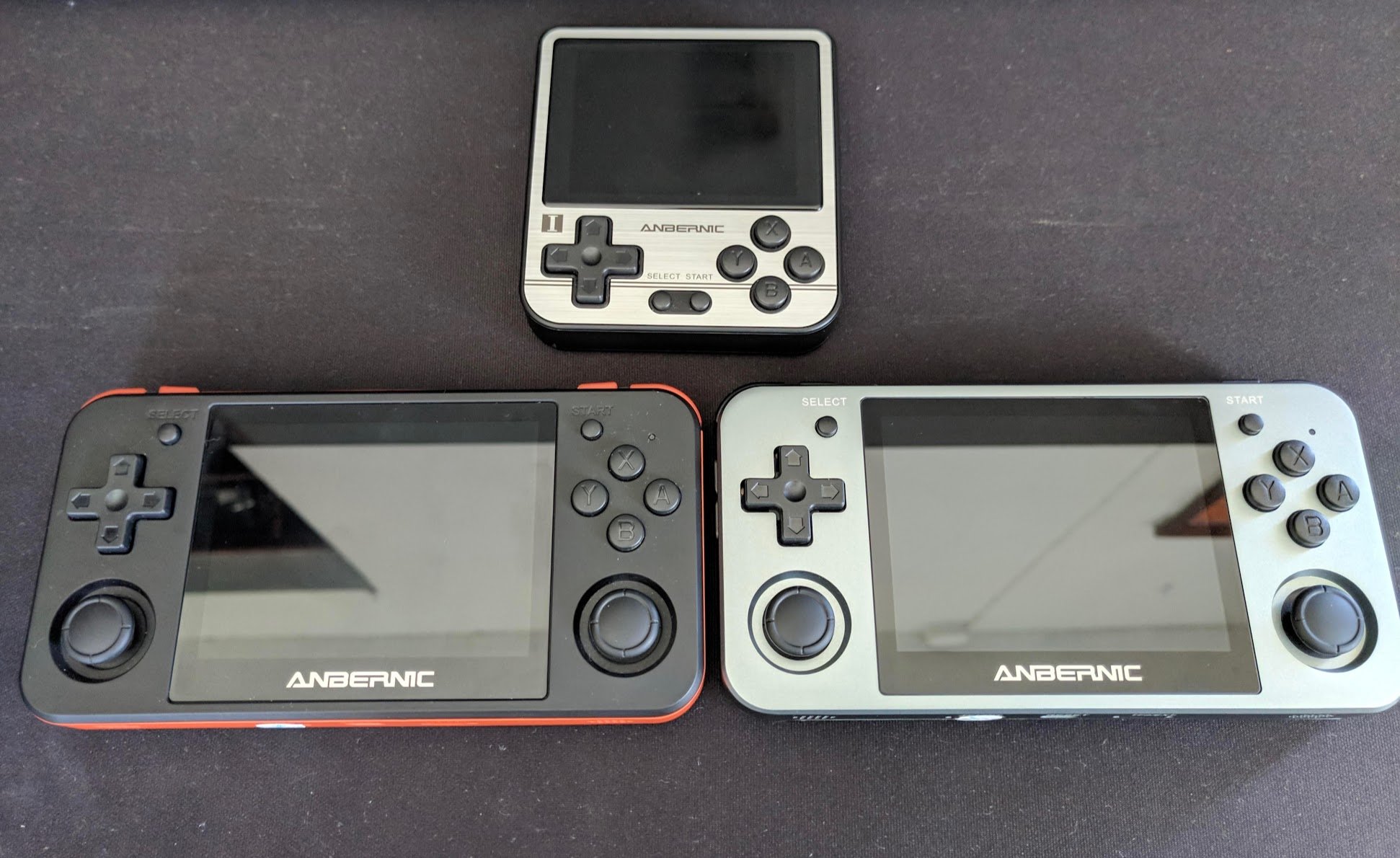 When there were rumors about an upcoming Anbernic handheld called 280V, I was wondering what the ‘V’ stood for in its nomenclature. ‘280’ referred to the screen size of 2.8” and the company only used the suffixes ‘P’ for ‘plastic’ and ‘M’ for ‘metal’ before. The ‘V’ was elusive until the device was revealed when it became evident that it stood for ‘vertical’. 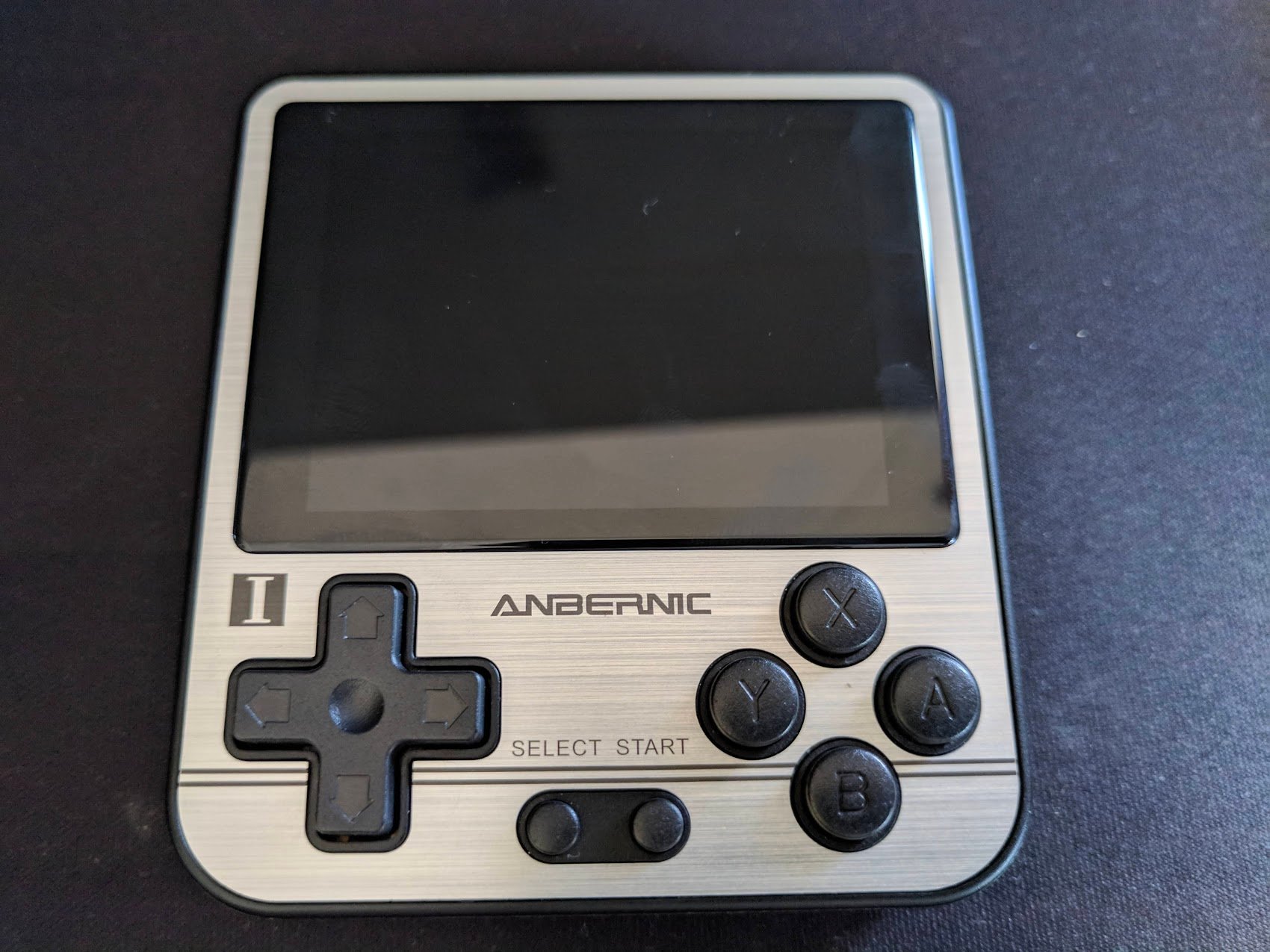 The RG line of devices from Anbernic were all horizontally-oriented until the 280V came along. It brought a fresh change, even if it packs an old processor. It’s really the GameBoy Mini that Nintendo never made and even plays and feels like one. The buttons, which feature a GameBoy layout (with additional ones), offer a nice feedback when pressed, the laminated 320*240 screen offers great visuals and the build quality is great, with a classy metal plate at the front. The latter comes in black/grey or NES gold/red variants and I feel like it’s a missed opportunity as Anbernic could have included the GameBoy color scheme because really, that’s what the device looks and feels like. And while it plays practically all GameBoy and GameBoy Color titles you can throw at it, it will play games from even more powerful systems like the GBA and PlayStation. 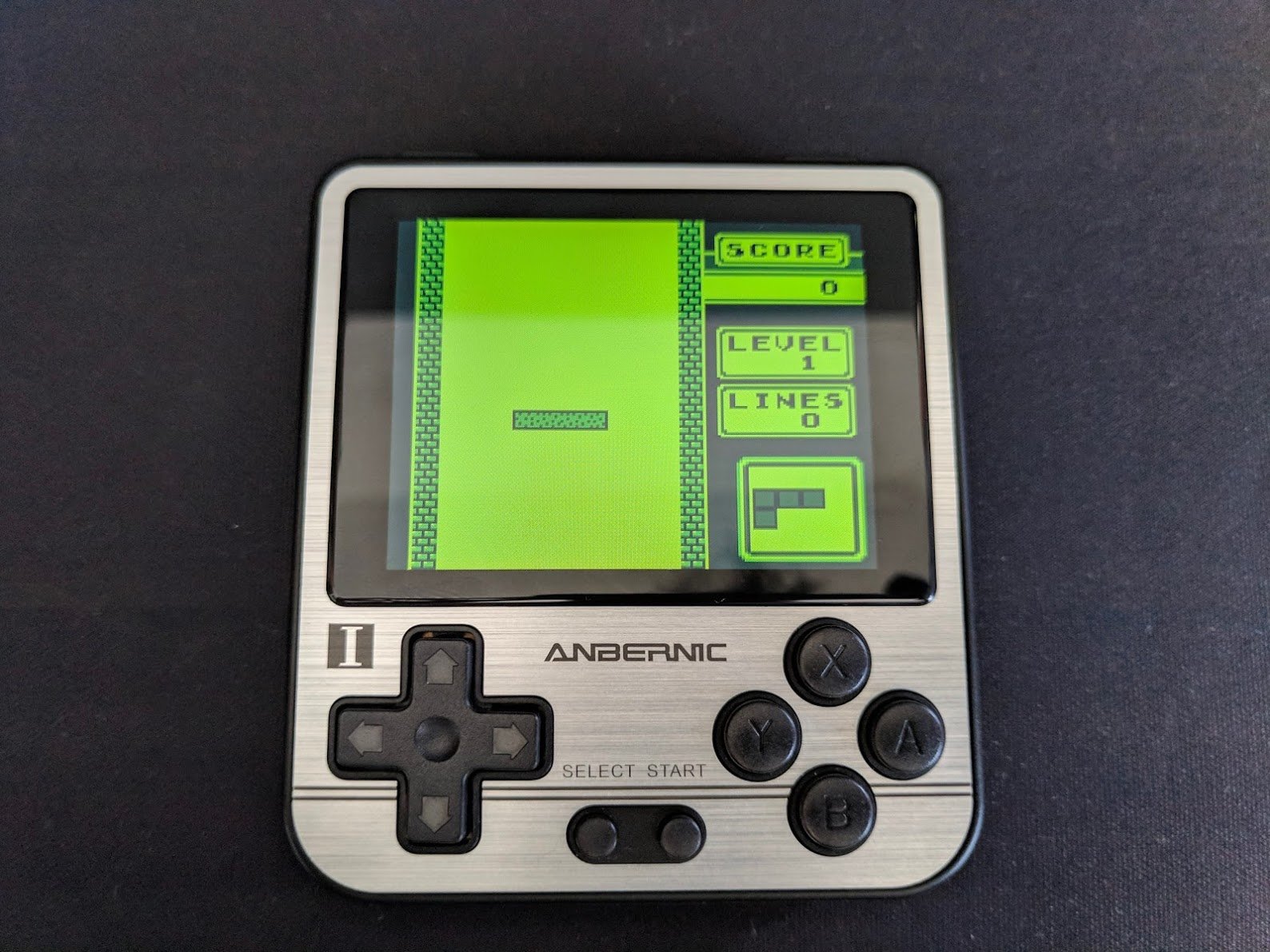 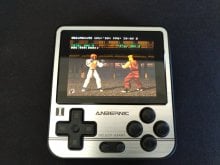 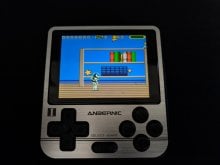 ​
It is also a highly pocketable device measuring 78mm x 89mm x 18mm. But that’s a double-edge sword as for long gaming sessions, I felt my hands and fingers getting cramped. I also miss the inclusion of grips as Anbernic usually includes at the back of its handhelds for added comfort. Another oddity is the placement of shoulder buttons. The L1 and R1 keys are L-shaped while the L2 and R2 are raised. This helps in differentiating them but the latter two need more reach to be pressed but thankfully, these aren’t used as much in retro games. 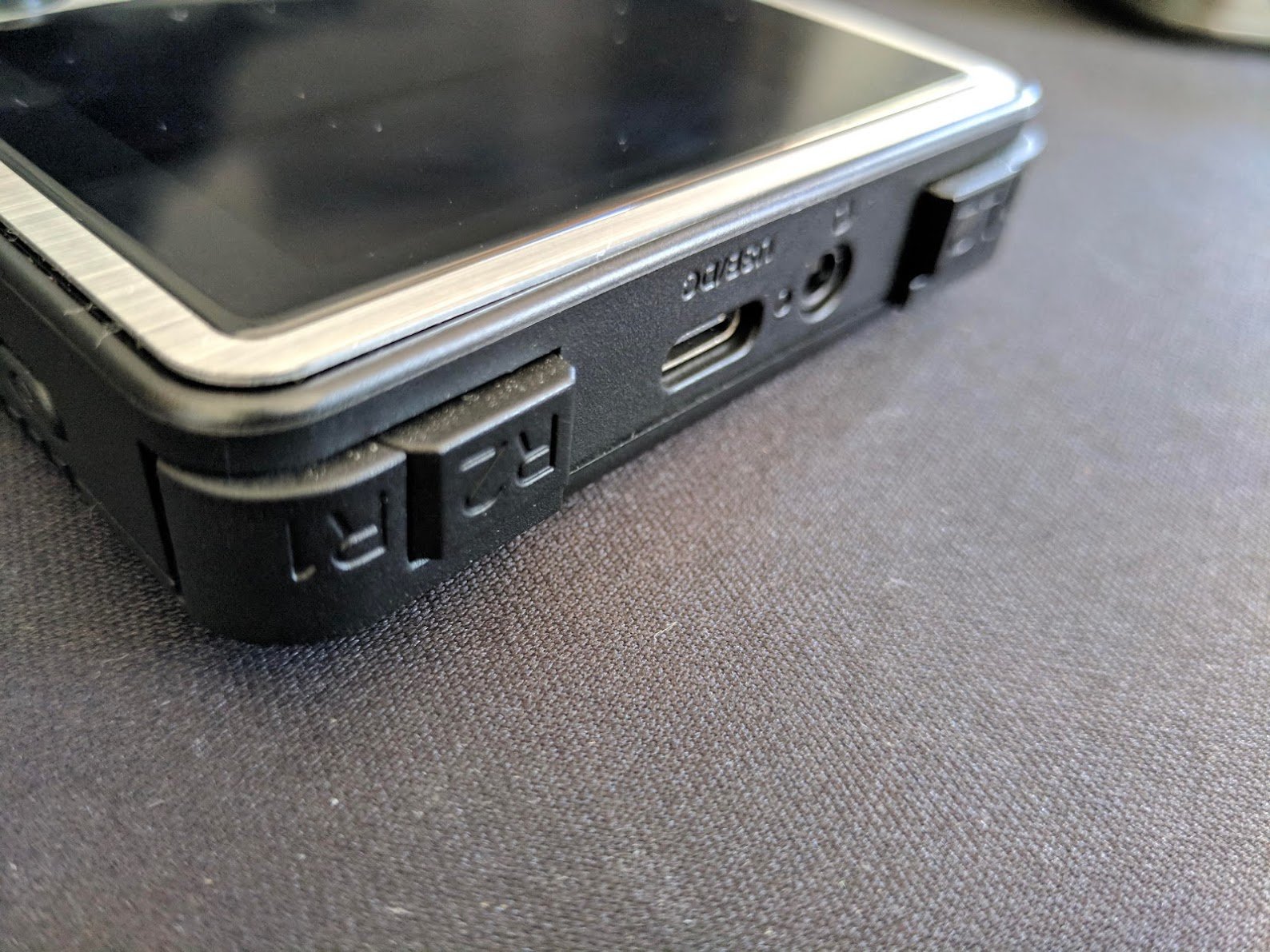 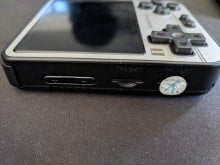 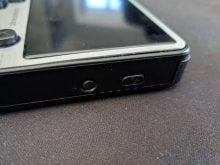 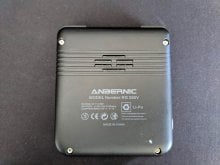 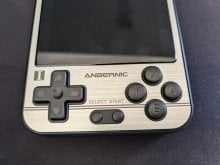 ​
The RG280V starts at $62 on the official Anbernic store. It’s not exactly cheap but if you’re looking for a “GameBoy Mini” with great build quality that can play more than just GameBoy games, this is the best there is out there for now.

This model was released as an affordable alternative to the RG350M and starts at $87 on the official store. It packs a plastic casing and a “downgraded” 3.5” 320*240 IPS screen (downgraded compared to the RG350M). It’s also light at 176g, comfortable to use and very portable. Even with a plastic finish, it boasts the Anbernic quality and I was very satisfied by it as I pointed out in my full review and I would encourage you to read it for deeper insights. 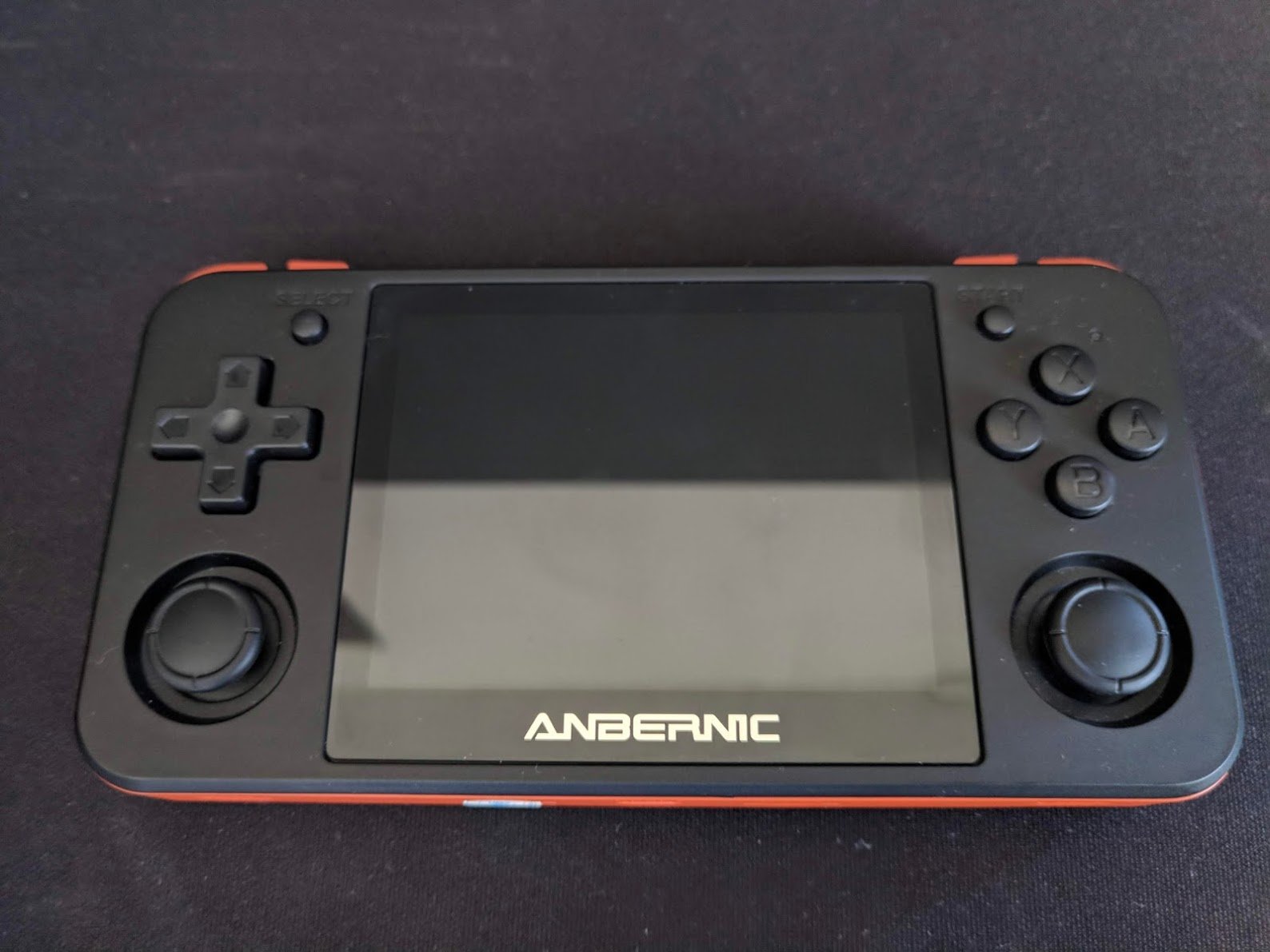 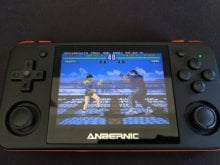 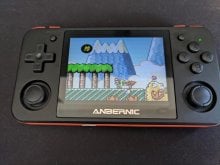 ​
It’s great for systems like the SNES and PlayStation with its 4:3 aspect ratio but it’s not ideal for GBA games, even if these play great on the device. But all emulators allow you to adjust the on-screen aspect ratio to your liking if you access the settings. If you want to get a retro handheld system that plays and feels great, the RG350P won’t disappoint.

With the RG350M, Anbernic showed how committed the company is to offering quality devices, even as a third-party manufacturer. When looking at it, you’ll know it’s a premium product with its aluminium alloy shell and when holding it in your hands, you’ll have the same feeling. The build makes it heavier than the RG350P but the heft adds to the premium feel. 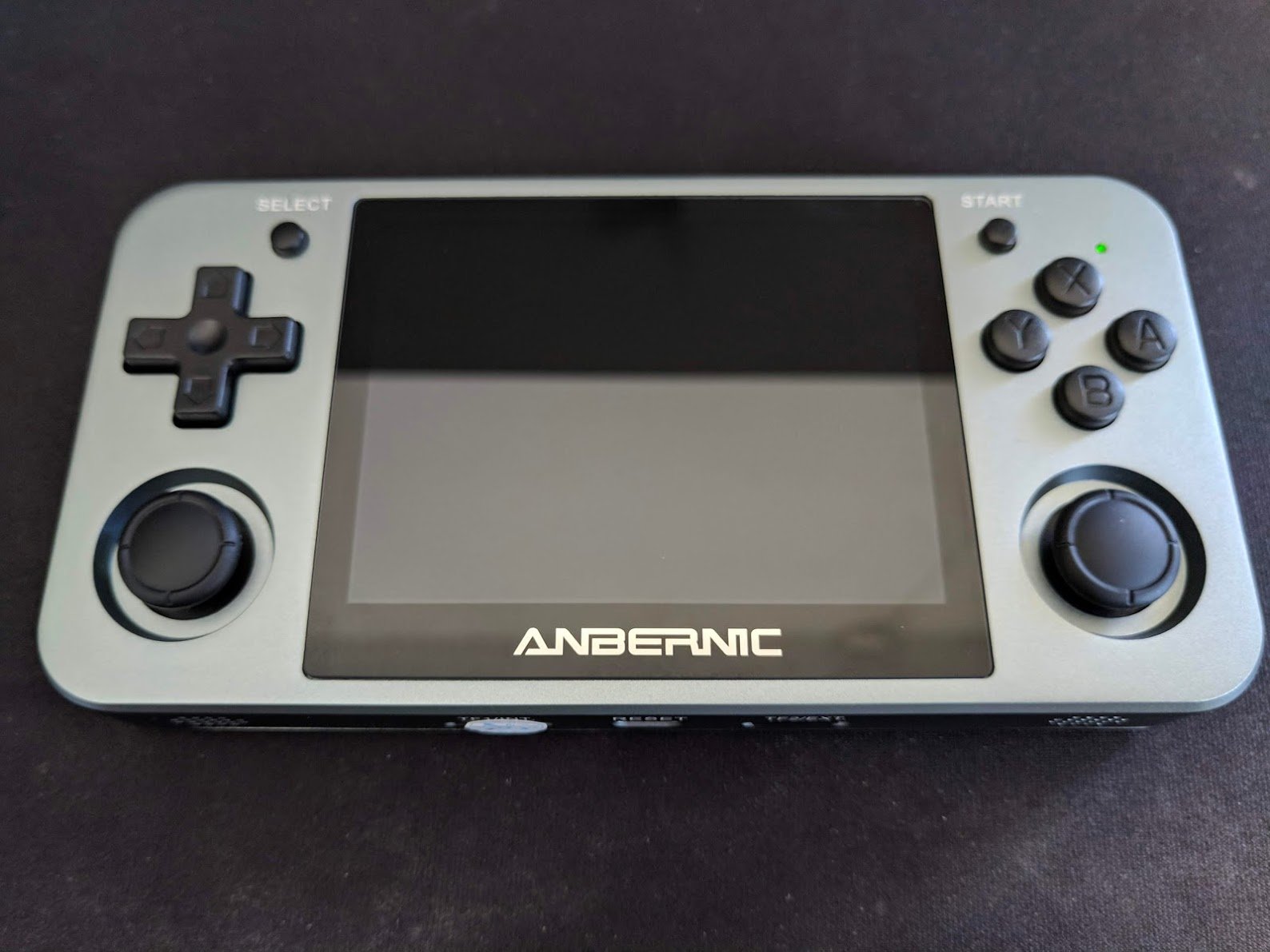 It’s sports the same button and ports layout as the RG350P except that it has an aluminium body and a superior 640*480 3.5” IPS screen. Games look and feel great on this system and the hardware really feels like it’s from a first-party console maker. 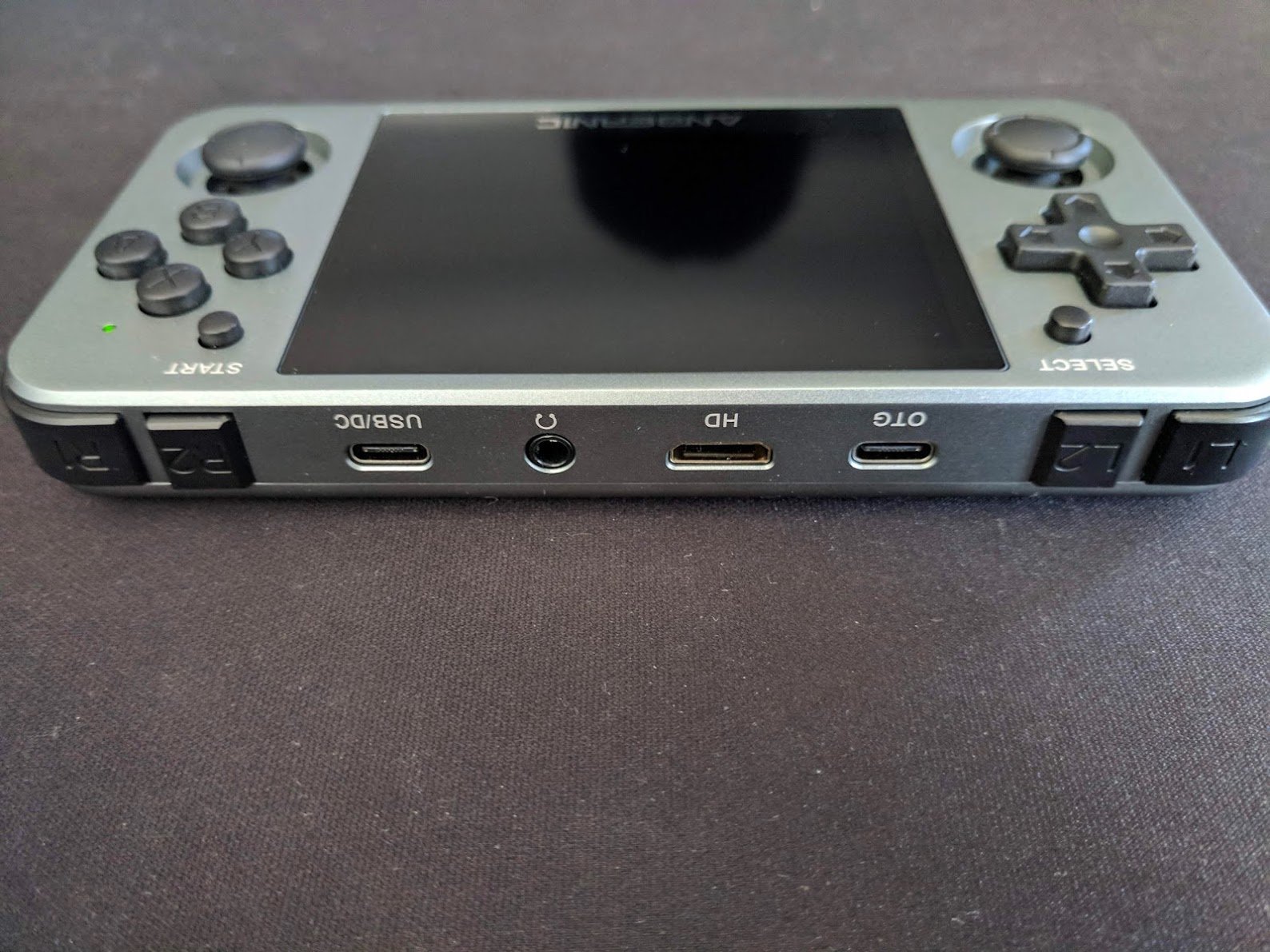 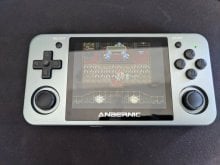 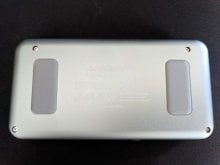 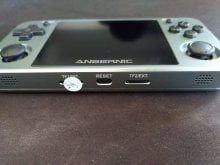 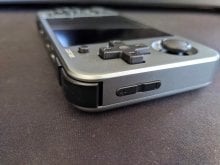 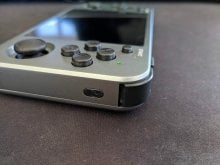 ​
While it will have the same performance as the RG350P, the RG350M is all about the hardware quality (and a nicer screen). It attests to Anbernic’s commitment to delivering quality devices but as with its other products, and especially with the metal version, it does not come cheap. The Anbernic RG350M starts at $115 but if you are looking for the best hardware in the JZ4770 retro handheld line and you can afford it, the RG350M is the one to get. 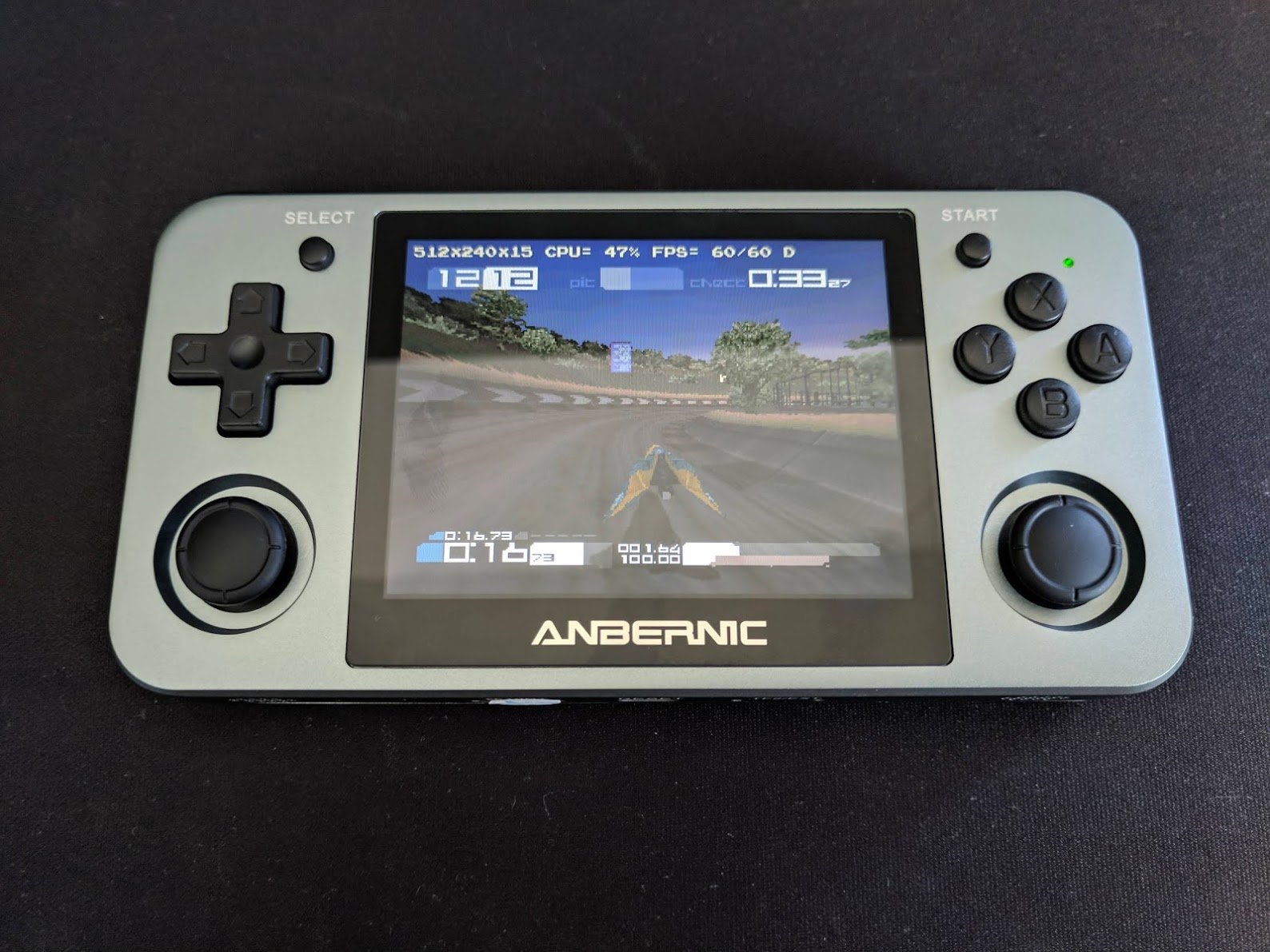 While Anbernic delivers quality hardware, the software side of those handhelds are a bit tricky as they are based on the open-source OpenDingux. There is quite a learning curve to operating its OS such as in adjusting brightness which requires a hotkey combination and updates aren’t particularly straightforward. Additionally, not all emulators will scale on the screen to your preference, so you will eventually have to fiddle with the settings which can be quite bothersome. Nevertheless, once you get the hang of the UI/UX, those JZ4770 handhelds are among the best ways to revisit classic titles on the go on a dedicated hardware.

And things might get better soon as Libretro has recently announced that they will officially release RetroArch for OpenDingux along with some cores, using the RG350M as a flagship platform. However, all JZ4770-based devices should also be supported, and they might not be on their way out just yet.
Reactions: tfocosta, Julie_Pilgrim, Y0shII and 6 others
Click to expand... 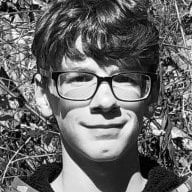 Jiehfeng said:
Mostly anything that retailed for over $300 or so, I don't have any specific phones in mind but such phones would decimate the Pi.

On the other hand, old phones less than $100 or so would maybe be less powerful, if that's what you mean.

Though there are new phones at such prices now that are way more powerful. $80 and up.
Click to expand...

Right, I should have said that it’s more powerful for the price. Honestly, the ability to daisy chain RPI’s makes this seem like an obsolete conversation (simple addition shows that even 2 Pi 4’s with 8GB’s of RAM double the performance in all areas)

ertaboy356b said:
It can run GBA in overclock, PSP and PSX are almost native. Arcades maybe up to CPS2, it can't run Ninja Baseball Batman.
Click to expand...

Plus Vita games of course.

A hacked 3DS can run DS,DSI and 3DS games perfectly, quite good for GBA ( actually the best to run GBA save for a few games and being unable to trade), Sega Genesis and Super Nintendo emulation is okay as long as you go for Euro games.

A hacked New 3DS/2DS has better hardware and so is better on the 16 bit emulation part, unfortunately emulators specific for it have not been updated for a while. Since so many new exploits were found last year (unless you were an idiot and updated the firmware) hacking any model of 3DS/2DS has become quite easier.

The Vita unfortunately is still a bit harder to hack while the early PSP-200, if you can get one, is not only the best model of PSP overall but the best to hack.

Edit: Unfortunately the charger of my PSP got damaged and all I can find online is the stupid charger for the car.
Last edited by raxadian, Jan 15, 2021 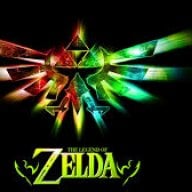 My cheap phone (buyed last year for 130€) have
Is good for emulation have mirror screening via otg or wifi. Can emulate pretty well dreamcast but not ps2 (probably because not exist a good free ps2 emu under android)
The problem is = oppo remove completly the bootloader access so no root

Naxil81 said:
My cheap phone (buyed last year for 130€) have
Is good for emulation have mirror screening via otg or wifi. Can emulate pretty well dreamcast but not ps2 (probably because not exist a good free ps2 emu under android)
The problem is = oppo remove completly the bootloader access so no root
Click to expand...

Sadly no Dreamcast or PS2.

Ok fdroid... ANDROID for my opinion have best concept... But the other side of medal is Tons of trash app just for advice (example mirrorscreen app, redirect on stock screencast menu, totally useless but with 2 thousands of advice).
I never try opendingux... Exist x64 or x86 version of this os? I have 1 old eeepc with 1gb ram and athlon inside.

We're going to see some amazing handhelds this year as they push closer and closer to perfect portable Dreamcast. Of course they'll milk it every step of the way there with a zillion "almost there guys!" revisions until the final ultra super deluxe II version is released (early next year) as people keep consuming these releases due to affordability and the relatively high used resell value.

One thing I hope they work on is the chunkiness as all of them look decent in pics but in hand you can feel they need a bit of diet which few people ever speak about *hint hint free review handhelds kthanxbye hint hint* for some reason...

@ Ophelia_Later: never heard of it whats it about 3 minutes ago
Chat 2