Homebrew A couple of homebrew and GX questions - Where is the wii homebrew documentation? 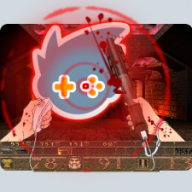 I'd like to find out more about WPAD orientation but I don't know where to find the documentation - specifically, I'd like to us the roll of the nunchuck as a factor, but I can only find WPAD orientation as used with the wiimote, not the nunchuck.
After using the devkitpro "getting started" page, and installing the kit, everything else I've picked up from here. I just don't know where to find documentation for coding for wii homebrew generally.
I'm working on a quake port - there's a few instances where ID coded for rendering changes to be accessible from the console during development, and decided to leave these in for end users to play with.
They're not essential so they haven't been implemented in the wii's GX code, but it's things like not rendering the skins, whether objects block light etc, so I'm hoping I can make some simple changes that reflect the original functionality
Where can I find out about GX?
If anyone GX savvy fancies having a look at the code I started with - https://github.com/Oibaf66/quakeGX_mod
W

The original gx document from Nintendo can also be found, look for 'Revolution Graphics Library' with a search engine.
Reactions: kaisersozeh