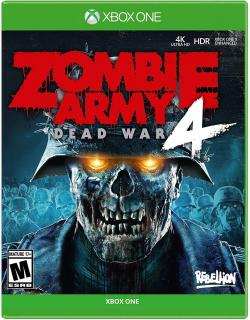 As a huge fan of Rebellion's Sniper series and the Zombie Army games preceding this one, I'm looking forward to sinking my teeth into this undead nightmare. The question is does it raise the bar or just raise more hell?

Rebellion has given us so much entertainment over the years, it's off the Richter. The Aliens vs Predator games, the Sniper Elite series, and Strange Brigade to name but a few franchises that they have lovingly crafted into benchmark titles that give new meaning to the phrase "gold standard," delivering consistently solid scores across aggregated sites. When Zombie Army Trilogy came out in 2015, I was hyped to finally get to play something I hadn't played before. It was a spin-off of the Sniper Elite series with a grotesque twist that really appealed to me. Up until then, I had played a heck of a lot of Sniper Elite on PS2, even more on PS3 with the spectacular V2, but I had drastically missed out on the PC iterations featuring zombies as I simply didn't have the hardware at the time. When the PS4 trilogy dropped it was a day one purchase, but to be honest it felt a little laboured after several scenarios and, I have to admit, that a few of the later levels I found really tedious thanks to relentlessly re-spawning enemies. The question, certainly at the forefront of my mind, was: has Dead War upped the stakes or challenged the norm to provide a more up-to-date nazi zombie blaster?

Dead War comes some 5 years after Zombie Army's original debut on Xbox One and PS4, and does indeed come packed to the rafters with updated features and additional content that I have to say has been well worth the half a decade wait! The game begins in a dark dingy alleyway, boarded off to funnel you towards the next objective. You start off with a boatload of sitting ducks to get you in the mood for skull popping and over-the-top gore, and it nicely eases you in as you smash the first creature's head clean off with such a satisfying burst of claret. Line up your targets, empty your lung and pow; three for one, and you now get an arcade-style multiplier in the bottom right corner. This game wants you to combine cleverly timed shots with well-placed lung-emptying tactics that will spawn outrageous scenarios, and it pays dividends when you bust an undead's brain, and the bullet carries on through to the next one puncturing its lung, dropping it to the ground like a sack of spuds. Every second of the game is crafted to perfection, and I'm barely five minutes in. 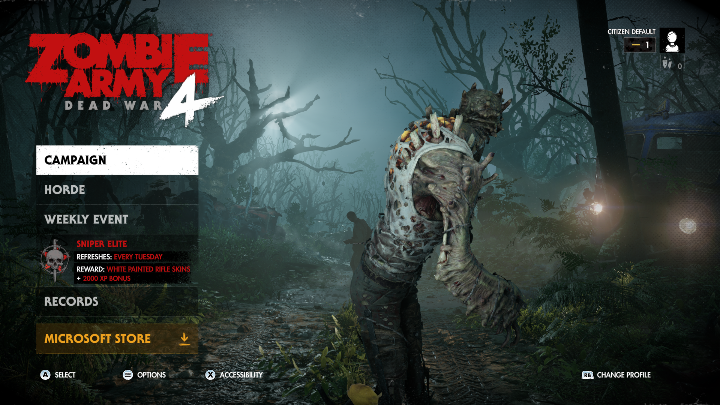 If you're familiar with any of the Sniper Elite games, you'll be right at home with the control scheme of Zombie Army 4. I found it intuitive to pick up and play and even found alternate buttons to hold your breath on the L3 stick while hunting for headshots in zoomed mode. It expands on the tried and tested perfection of its predecessor's control scheme and unexpectedly makes it even better than before. Loading out your character is a slightly longer affair than before thanks to an expanded range of options to configure. You now have a choice of several characters including Shola, Jun, Boris, and of course our long-time protagonist Karl Fairburne. We also have an expansive weapon selection, more sidearms to choose from, more destructive devices, customised livery for your main weapons, and now emotes and expressions you can choose to give your character even more, well, character. Emotes range from the typical Fortnite-style wacky dances to more apt motions such as Caesar's thumb across the throat death gesture, or the "I'm watching you" two-finger pointing gesture, which is known the world over. Once you have this all configured and ready for action, it's time to step in and get filthy.

The first proper chapter begins in 1940's Milan with you fending off a hoard that has hitched a lift to the train station. Initially, it feels like its a pretty standard opening level, and it is, however you then get drip-fed with a slew of new features that I honestly didn't realise I wanted until now. Much to my sheer joy, you get lavished with a combo counter, multiplier, and timer bar on screen when you hit your first 2 targets within a couple of seconds of each other. This feature feels fresh, it's new, inviting and inventive in allowing you to use brute force or stealth tactics to keep your combo string going. For example, if you see a murder of crows or mischief of rats, but no rotters, then smash a few of those critters to keep your gauge full and when you come across the next wave of the living dead you'll be able to carry on your multiplier. Combo together your kills and you quickly unlock perks and achieve your chapter's targets to unlock even more goodies too. Your melee combat has also been improved and there are three new rechargeable mechanics employed for those last-ditch attempts to survive the onslaught. You have a gnarly sweeping slash, an A button takedown which can be used in a multitude of ways to dispatch your foes, and an LT+RB slow-mo mode which can really get you out of a bind, providing, of course, that you have enough ammo left over. If all else fails you can always flip to your semi-auto sidearm and spray and pray, or really knuckle down for those last-stand-style moments with your trusty pistol. Dead War also introduces a revolutionary new electrified weapon class, with electric grenades, trip wires, and an electrified add-on for your rifle that, when used correctly, violently tasers every putrid freak in the vicinity of the very one you zeroed in on. I have to say this class of weapons adds a fresh take on the existing trips, traps, and mines, and really appeals to the non-lethal approach style players. Of course, it only serves to slow the otherworldy cretins down and rarely actually kills them. 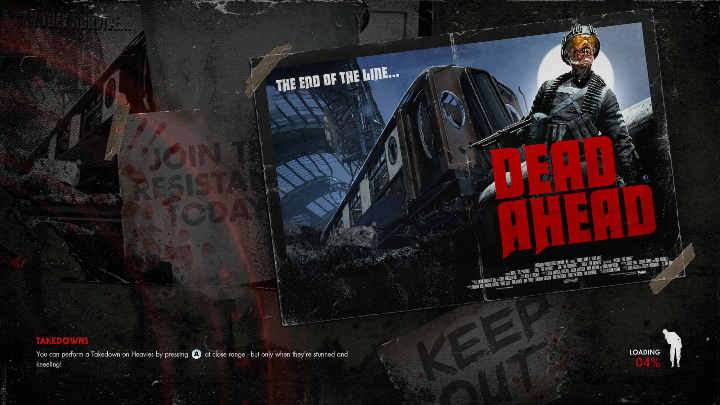 Zombie Army 4 introduces us to several new types of the foot-draggers. You have your standard gormless lurching corpse, a gormless lurching corpse with a metal hat, and the occasional wild-firing gunner type, but if you thought you had seen it all, then think again. We now have "suicide" bombers (if you can call the recently departed's resurrected cadaver that) to contend with, who run screaming at you all the while counting down to an inevitable explosive crescendo, you have huge towering brute types that tote larger than average weaponry, and a load more I won't spoil for you. You can obviously use each one to your advantage once you're fluent in the infected's culture, and adapt your gameplay to overcome these enemies in ways that help you decimate the following hoard too. You will get over-run very quickly if you stand around, so the best advice is to keep moving and keep exploring every nook and cranny with the greatest of haste.

The second chapter takes you away from the urban sprawl and transports you to Venice with its tight turning corridors and shark-infested canals. Yes, I said shark-infested, because of course great whites have made it to Italy and become ungodly massive macabre monsters; it is entirely ridiculous, but it is utterly engrossing. You meet up with Captain Dutton who commands a boat you have to invariably defend, but in a nice twist you also have to supply it with fuel and raise the proceeding gates and bridges to help it get through to the end. One of these tasks requires you to find two cogs to complete the contraption for you to be able to progress, however it is all down to you to figure out where these cogs have been stowed in the environment. It took me longer than it should have and, I have to admit, that this stage was a slight trudge for me as I got turned around on multiple instances and at points, I had no idea where I was going or where to look next. One upside of this was that I managed to complete several kill streaks and challenges along the way thanks to the never-ending stream of enemies to kill. There were literally hundreds of them, permeating the level, dripping off rooftops, emerging from underwater with wreckless abandon stumbling towards me with flagrant disregard that I had to push forward with tasks. Eventually, I found my way around to get the parts that I needed and continued on merrily until the end. 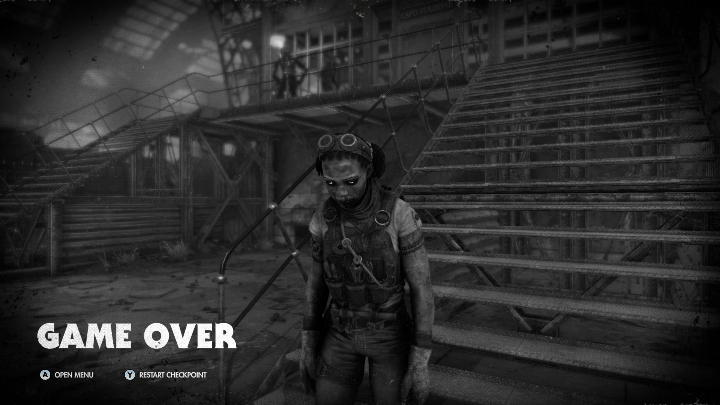 You unlock stickers for your zombie sticker album that catalogues over 70 types of biters, weapons, locations and "things" that you interact with. There are also comic book pages to collect, heroic actions to unlock, enemy memos, zombie hands, and equipment upgrades to find, often scattered in the less-travelled areas. The sheer multitude of side quests is superbly exhilarating. One of which has you literally hunting down zombie's hands, that have human names and seem to have taken on personalities of their own, running amok in the streets in the dandiest of places. I found one wielding a blade and scampering around in the shadows, casting crazy silhouettes on the walls. There is a progress meter that tracks how many you have discovered and how many there are left to find before you unlock your next upgrade. Slinking through the locations and finding new blood-curdlingly infested hotspots is incredibly atmospheric, with environments ranging from elaborately claustrophobic indoor room models, expansive outdoor areas with plenty of choke points, slow trudging creeping flooded tunnels, and more. All in all, each chapter blends together an ultra high-quality presentation with a slight, cheesy B-movie vibe. This is definitely a good thing though, as the overall feel of the Zombie Army games needed to stay current, and it feels a lot like Strange Brigade has had a good influence here too with its preset traps designed to mulch and pulverize with a little input from yourself. As ever, explosive objects litter the streets and it's up to you to decide when to employ them or how to avoid them, and with the new combo system, it's a hell of a lot more fun devising kill-room style scenarios and luring the hoard into your eviscerating traps.

Zombie Army 4: Dead War is a culmination of years' worth of Rebellion's pedigree games, blended with modern elements and a slight tongue-in-cheek retro feeling that is mightily impressive. It's the real nuances that define this game come with the countless little touches that you notice as you scour the incredibly well-crafted environments. Be it a lowly typewriter you can interact with that comedically types quips such as "Don't say the Z word," "You gotta be kidding me," or "They're coming for you," or the stereotypical creepy child's voice you hear randomly and sporadically throughout, and the even creepier occult fuelled dolls that are scattered about who seem to have a penchant for doing spooky and bizarre things like banging on doors or screaming at the most poignant, unexpected moments. Let us also not forget that when you die in this game, you also become a zombie in the post kill camera, which is a hilarious irony until you next respawn. Zombie Army 4: Dead War is a masterstroke in building an acrid atmosphere of creeping suffocating tension juxtaposed with the realization of the accountability you have to take for your frenzied actions. I don't think I have ever played a more polished and evolved version of this game in this genre, and until a Zombie Army 5 rears its ghoulish head, Dead War is easily the definitive experience on your current-gen consoles.