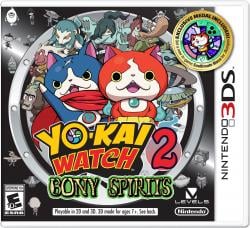 The sequel of the hit Japanese series, does Yo-Kai Watch 2 manage to win over Western audiences more convincingly than its predecessor?

In case you haven't read the review of the original Yo-Kai Watch, I would recommend you give it a look as I'll be referencing some of the points made there.

The series' story revolves around mischievous spirits known as Yo-kai, resurrected spirits of animals and people who are normally invisible to humans. Through the power of the Yo-kai Watch (roll credits) our protagonist is able to see, battle with, and befriend these creatures. Yo-kai 2 adds more of these practical jokers to fight with and is sold in two versions, each with their own exclusive Yo-kai. If you're not already reminded of some other monster-capturing and battling series on Nintendo handhelds, the similarities only get more noticeable.

This time around, we follow a Yo-kai civil war forged by an argument over donuts, hence the two versions of the title. As I mentioned in the original review, the plot always felt disjointed and needlessly separated by fetch quests; well, Yo-kai 2 does very little to remedy the issue. There's still the same barely existent, extremely delayed central plotline which frustrated me oh so much, especially considering Yo-kai's affinity for good writing. There's clearly a lot of talent displayed by the writers here, as the second title is as genuinely funny as the first, so why ruin every moment with another fetch quest? Grtanted, a few new types of quests have been added to shake things up, but the lack of real improvement in this area is frankly astonishing. 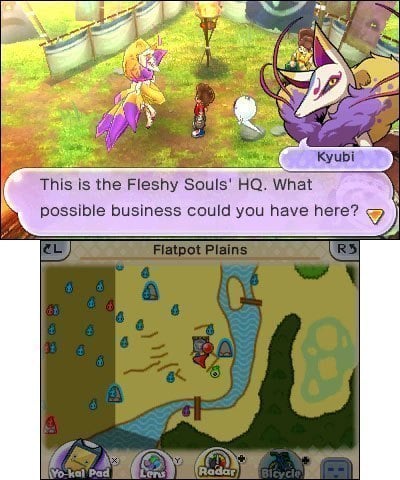 If you've read the review of the first game, you'll know how disenchanted I was with the combat system as a whole. It was plagued by an unnecessary amount of randomness, a lack of depth, and an emphasis on passivity that is tedious and frustrating. As with the fetch quest issue, Yo-kai 2 fails to improve this situation in any way shape or form. The main battle interface is a wheel on the lower screen which allows you to switch in real-time which Yo-kai are fighting. Each Yo-kai attacks automatically; all the player controls is the occasional "Soultimate" move, accomplished through touchscreen minigames, and a throwable pin used for targeting. An annoying focus on status effects and this horrible passivity makes it an experience that isn't for everyone, and which I quite disliked. What's worse is that Yo-kai 2 takes the battle system from the original and leaves it almost untouched, showing a complete lack of care and evolution in this sequel. 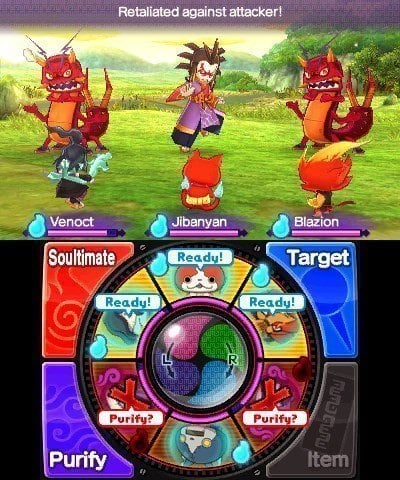 The issue of randomness comes in recruiting Yo-kai for your team. Yo-kai have random chances to be recruited at the end of a battle. This chance can be increased by throwing them food, but the food which each Yo-kai likes is completely random. This is a ridiculous system and makes it really hard for completionists to catch all the Yo-kai. One area where the game gets praise is its world map. It expands upon the main map of the original game and adds plenty of new areas. Though getting to these places is very tedious until you can teleport, it really is a well-designed, expansive map.

As beautiful as ever

Yo-kai 2's visuals are as impressive as those of the original. It's definitely one of the best-looking 3DS games especially considering its age. The Yo-kai designs are beginning to feel stale as a lot of the new additions are mere clones, but for the most part the title has very original design. 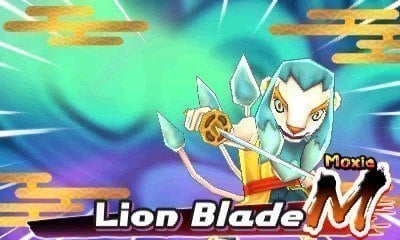 A lot of the music is reused from the original game, but most of the tracks still hold up well. Yo-kai Watch 2 presents itself about as well as its predecessor but with a significantly larger map, making it feel more complete.