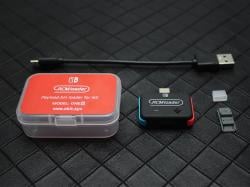 I found this very inexpensive "rcm loader" on ebay searching for what I believed to be way more expensive alternatives. I'll let you guess what those where without giving names. after paying less than 13 us dollars for a unit I thought would be china garbage like the fake micro-sd scams. I was pleasantly surprised.
pros and cons of this rcm loader versus the current competition, and why I as a current owner and user highly recommend it. 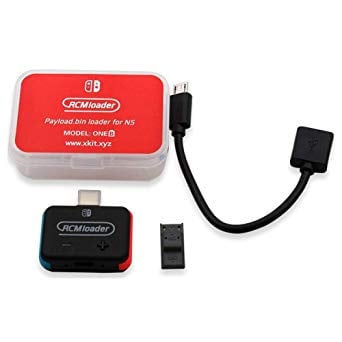 ​
As I previously stated I was in the market for a jig loader solution and went to trusty old ebay with not very good hopes as I figured id end up with china junk that would fail over brief period of time or not work at all. But with no risk there's little to no reward. So I went for it, found this unit very reasonable priced at 11.99 USD and the ebay add had instructions in the description. it took about 15 to 20 days to arrive from china. and came in a plastic shipping envelope that felt extremely cheap so I was even more weary... I opened the package viewed the contents ad was slightly relieved. It came in its own proprietary protective case with its own usb type c cord and the unit inside of it completely undamaged.

Right away I thought about the days of the r4 and found the site printed under a sticker on the top of the unit. it said "Xkit.xyz" in my haste I thought it was just .com but after re reading it I saw it was .xyz it sent me to a very nicely laid out site with easy to understand firmware upgrade and unit usage instructions.

The best part about this unit is it can store multiple payloads and you can interchange threw them with a hold of a button on the front of the unit. when you do it will change color according to how many you have on there and which folder the payload you want is in. One thing I learned is if there's blank folders in the middle due to deletions of payloads by the user it will not assign a color to those folders it will skip the color. or if ther's blank ones at the end i.e 4,5, and 6 it wont light up those making it very easy to switch between the ones you have a payload.bin file inside.

the one thing you need to do to make this work indefinitely is change the name of the payload like "fusee_primary.bin" to payload.bin in each folder for each one you copy and paste to the rcm loader via your pc or mac.

there are a total of 6 interchangeable payload folders on the device 3 are pre-named hekate reiNX and SX os, the other three canbe what ever you need like lockpick_rcm.

I understand now in later cfw for the switch we have in hb reboot to payload and payload selectors that defeat this purpose but to the non savvy this is a good alternative. I have attatched a pic of the firmware led breakdown.

also upgrading the firmware is a snap, just make sure your loader is fully charged first or the update may fail as the folder is supposed to disappear after completion.. I found out the hard way if unit isn't charged mostly it will keep the folder and not update. a simple way to tell is read your pc usb status the device name will have the version its on in the description.....
that's all I have to say. and I hiope it helps some of you save cash and get a great product at a fair price. instead of paying mostly for a "license" not to say that's bad either as I did that too in the end to test there stuff out but still went back toc atmosphere, but that's another whole story. 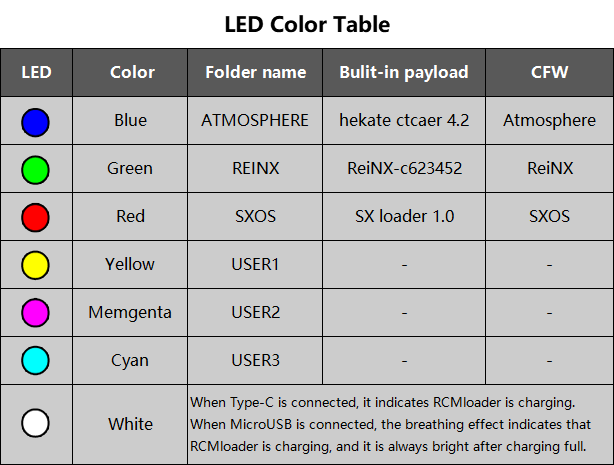