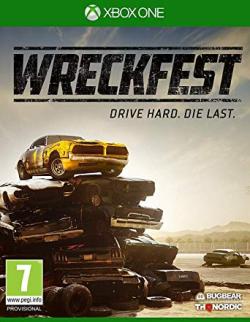 Loved Destruction Derby growing up on PS1/N64, so looking at this as a spiritual successor.
What's better than fast cars and crazy stunts? Ragdoll physics and ultra-realistic crash effects! Drive hard. Die last.

Destruction Derby did the impossible when it debuted on PlayStation One in 1995, providing teenage me with incredibly realistic damage, enthralling gameplay, and all-out insanity. Several decades later and Wreckfest picks up this mantle and carries it kicking and screaming into the 21st-century, in a fantastic way. The best thing about this game is the juxtaposition of tongue in cheek and photo-realism. It's a fusion of ultra-realism and crazy crashes, Gran Turismo meets FlatOut, and it takes the minute attention to detail of Polyphony Digital's seminal car game, and it punches dents into it, explodes it all over the track and sets all ablaze in a brilliant way. Frustratingly in the initial release of this game there were a number of bugs that made this game annoyingly impaired, namely a checkerboard effect glitch across the screen that seemingly danced around to the rhythm of the music which can be seen in some of the included screenshots, and what I can only describe as a weirdly morphed deflated looking driver model and body-part missing fans celebrating in the winners circle screens at the end of a race. Thankfully, as of the 1.0.0.12 update released on September 11, 2019, there are a huge number of additions and improvements graphically and technically speaking that make this game far more of an enjoyable and rounded experience, which is what it should have been out of the box. For the purposes of this review, I am going to focus my opinion and critique on this latest update as it really turned my initial opinion around and makes this game truly shine. 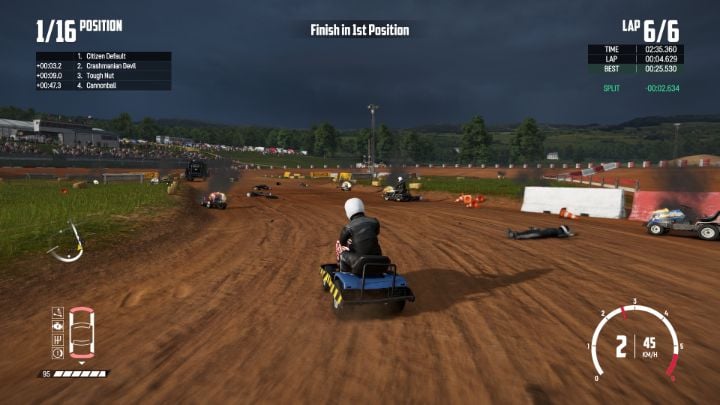 Firing the game up you are treated to several modes and several difficulties for you to clamber up at your leisure, depending on your skill level and ability. Starting off with career mode, it is effectively comprised of five difficulty settings: regional junior, which teaches you the ropes and even starts out with tractor racing, national amateurs, challengers, pro internationals, and world masters, the last of which really grabs control of the difficulty dial and cranks it up to 11. But don't panic, you will level up and gain the abilities required to compete competently. Each section is then split into a selection of events, such as races, quirky challenges, destruction derbies, and more. Multiplayer is incredibly well-stocked in Wreckfest, with a range of modes including racing, derby, event, and mixed options, as well as a custom event designer, and quick match option and even a server browser for those who just want to get straight into the action. Petrolheads can get stuck in too with a massive array of intricate options in not only the settings of the game but also the garage mode. The in-game settings allow for full customisation of the steering, brakes, clutch and accelerator dead zones, and saturation before you even hit tuning and tweaking through an extensive parts list menu. When you win races and achieve the mini per race challenges or meet the specified requirements, completing a race or event yields parts for you to alter your handling or style with lighter and more optimised parts such as: exhausts, spark plugs, window mesh, turbos and manifolds. Each part then costs you your hard-earned credits to install, meaning you have to be sensible with your purchases. Alternatively, you can also use in-game credits to purchase new vehicles, but the range and power of these vehicles depend on your overall XP level, and quite a few of the A-classed (read: interesting) motors are only obtainable upwards of level 19, which actually means you cannot get too overpowered in the lower classes until you have earned your stripes through the rookie stages. 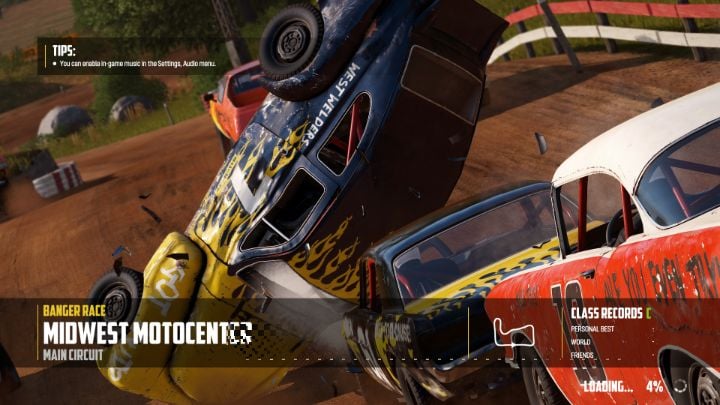 Having played a lot of Gran Turismo over the years I understand the learning curve involved with racing games, and I love the fact that you have to learn the courses, develop tactics, and knuckle down into the longer events in order to survive, but also having turned to games such as Destruction Derby, the Burnout series and even FlatOut: I was prepared for mayhem, and Wreckfest didn't come up short or fail to impress. Maintaining your car's stability and ability to move is key, and shunting or smashing other players will only get you so far before you realise you can no longer turn in any direction, leaving you beached like a whale on a cambered turn. I originally dove into Wreckfest in an aggressive headspace, hoping to destroy them all as you would in Burnout Dominator, but Wreckfest is different. Wreckfest is the next evolutionary step in fusing these seemingly divergent sub-genres of racing games into one ultra-sexy beast. I stormed through the first five or so races with zero incident, only learning to adjust to the tracks and figuring out what elements are breakable and what ones will completely obliterate your metallic soul should you even glancingly snag a wing mirror on one, and let me tell you, this game can be infuriatingly unforgiving. I had a few starts that saw my car crushed in the sardine-can-like lift of at the beginning of the races, I was uncontrollably forced along, smashed, lifted, and flipped on several occasions which caused me to have no choice but to hit the Y-button to restart; the consequence of which is the game throwing me back in excess of seven or eight places, and from there on it can be a tough slog to get back into the race in order to excel. I found myself changing tactics more-often-than-not, to take a step back and drive defensively, learning how to take advantage of the car-heavy bottle-necking areas. I was flooring it through sections I knew I could use the other cars as "human shields" to enhance my chances of maintaining a decent line while cornering and with a bit of luck: shunt them out of play altogether for the sweet XP bonuses. If you can perform some stylish "takedowns", you can earn masses of bonus points to level up quicker, but its a fine balance between smashing them and stoving in your own vehicle, so pay special attention to the car condition indicator on the lower left of the screen. This is vital if you want to survive and do well at the same time; know your limits!

As racing games go Wreckfest isn't superficial with its dashing good looks, superb physics engine and competitive AI; you will find it a steep learning curve after a few tutorial level events, and this difficulty spike feels right, it's not too hard that you find it outlandish to even try to participate anymore, and more importantly at the other end of the spectrum it veers away from continually being too simple to make you bored of winning, it's challenging and rewarding in it's own right. Bugbear is constantly tweaking elements like rubber-banding and AI scripts to make it more rewarding and less of a chore. Thanks to thorough user feedback and truly listening to the community, they've been able to derive solutions that are making this game more and more exceptional. 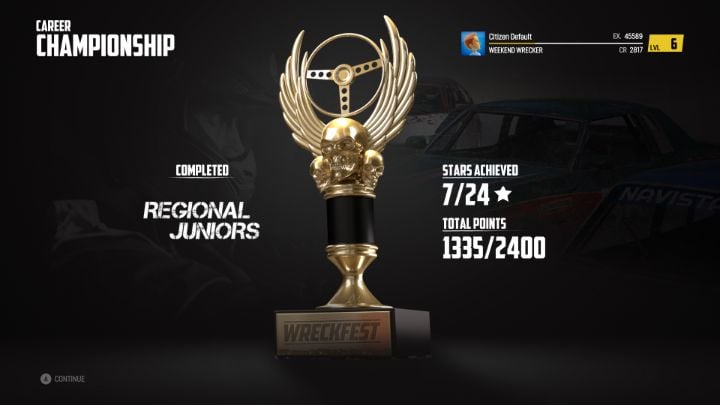 One small gripe I have with this title--and bear in mind that this is only a small one--is the overall music presentation. It's aptly upbeat where it needs to be by blending metal, drum and bass, dance and electronic music into a largely thumping soundtrack, but the music itself doesn't punctuate any of the in-game elements or transitions from menus to loading to game-play with any uplifting finesse. I felt like it needed some breaks in the music; some fanfare to rise up and accentuate the start of the race, something that was uniquely Wreckfest to add a little polish to the sound design. I don't know if its just games in general or I'm getting old, but the music is a large part of the experience when playing games today and with such a plethora of incredibly intricate settings to mess with I thought this wasn't quite up to scratch with the rest of the game's overall design.

I would fully recommend Wreckfest to anyone with a penchant for racing games. It's stylish, it's clever and it's incredibly well-saturated with unlockables and things to do. I enjoyed every minute of this review thanks to the superior blending of its technical brilliance and brazen white-knuckle adrenaline-fuelled hilarity, thanks to a great physics engine paired with obvious developer enthusiasm to bring us a stonking game that offers a more-than fully fleshed and entirely destructible derby game brilliantly into the 21st-century.

What We Liked ...
What We Didn't Like ...
8
Gameplay
Easy to pick-up and play, tough to put down, and there is something for everyone in this smorgasbord of a title. Tractors, school buses, and harvesters to name but a few of the zany vehicular instruments of carnage.
8
Presentation
Superbly blending the styles of its peers such as Gran Turismo, Burnout, and Need For Speed; Wreckfest is a photorealistic smash-em-up which is an absolute blast to drink in.
8
Lasting Appeal
Lots of events, per race challenges, and a huge multiplayer selection make this game a belter throughout.
8.5
out of 10

Enjoyably casual gameplay which draws you in an makes you want to do better each time you play.
Reactions: DSSP, StrayGuitarist and relauby
Share:
Facebook Twitter Reddit Pinterest Tumblr WhatsApp Email Share Link
As a huge fan of the Burnout and Gran Turismo series, I gotta say I was really excited as I was reading this, but I really hate the design practice of "Fuck up once and you basically gotta start all over". I'm definitely still going to check it out, maybe see if someone I know has it so I can muck about with it for a little before pulling the trigger for sure..

But all in all, a really good review!
Reactions: KiiWii
We NEED more Burnout style games. Such a good franchise that needs more spiritual successors and copycats
Reactions: StrayGuitarist and KiiWii
And FlatOut
Reactions: KiiWii

Yeeessss. I seriously cannot overstate how much fun I've had playing Burnout 3: Takedown. I used to have friends over as a kid, and the main two games we'd play were always Burnout and Halo 2.
Reactions: KiiWii and Chary
Apparently the PC version was "ruined" after a big update in August that made the game to be the same as the console versions? AI changed, damage changed, car physics changed, etc. I'm going to install the pre- 1.25 version of the game and check it out for a few days, then install the updated version with all the huge changes and go from there. From all the fuss over at the Steam forums, it looks like people feel the game went from an 8.5+ to maybe a 5 or 6.

we need more Destruction Derby as well, yo. Add that to your list so we make a petition.