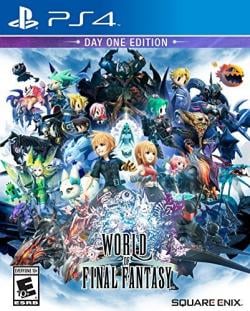 What is there not to love about Chibis, honestly? They’re tiny, adorable, and you could just pinch them until they explode. But even cute things have their downfall, especially when it comes to writing and gameplay. Which brings us to today’s review of World of Final Fantasy.

I’m going to be honest here, WoFF already began on a sour note for me when I saw there was no option for Japanese audio. I immediately sulked into the game just waiting to be met with over-the-top English voice acting and was met with even worse than what I expected. I have to be blunt, it’s 2016 and we still can’t seem to find the ability to hire voice actors that do not over-act and over-play their character tropes for Japanese games. And while I am harping on the voice acting at the moment, it doesn’t excuse the fact that the writing is actually decent enough for them to put in a better effort of portraying their characters better.

The main characters of the game are Lann and Renn. They’re pretty much the typical anime protagonists to the nth degree. On the bright side, the writing of their characters is actually quite humorous and enjoyable throughout the story. If it weren’t for the terrible VA, I probably would have connected with them more than I had, as their relationship and the mounting crazy antics around them was a solid push for the story.

But as I said earlier, your writing can only take a game so far, and it’s the gameplay department of World of Final Fantasy that inevitably left me bored and uninterested.

As with all original Final Fantasy’s, WoFF is a turn based RPG with monster collecting and a lot of traveling to different lands. The difference in WoFF is that, in an almost Pokemon-esque fashion, you venture out to collect various Mirages and use skill points earned in battles to evolve them and boost their stats. These little beasts can then fight alongside your human protagonists individually, or be stacked into a squishy little tower of cute stuff to fight as one totem-poled entity. Stacking the mirages will combine both strengths and weaknesses so there is a lot of opportunity for good and poor strategies to be used.

And good lord, there are a lot of Mirages. Hundreds of them in fact, and they can all be combined or raised up into new little beasts to further enhance and change up the way you play.

You may be thinking with hundreds of little creature-combos that it makes for some extended gameplay and replay ability. Sadly, what it boils down to is an overtly repetitive capture and evolution game that doesn’t have the same draw or appeal that Pokemon has. The constant swapping of allies and monsters and attempting to keep them all up to par with newer enemies and encounters was a chore that I found myself hating towards the end of the game.

Little sidequests here and there help to stave off the monotony, such as colosseum fights and treasure hunting, but nothing will save you from the cycle of the same boring combat encounters over and over again.

The world itself also suffers from being incredibly small and linear. Dungeons and towns offer little to do and explore compared to even the most basic RPG’s which is quite a surprise coming from a Final Fantasy game.

Nostalgia of the originals is probably one of the biggest selling points of World of Final Fantasy and the fan service is incredibly strong with this game. I am not the largest final fantasy fan but even I was able to appreciate the various throwbacks to character tropes and running into all the incredibly iconic and familiar faces.

Despite all its monotony, the game itself is not inherently bad, it just suffers from repetition and banks on its nostalgia as its biggest selling point.