Hello, my name is Stealphie and this time i'm reviewing the Wired PowerA Gamecube Controller for Nintendo Switch.

For anyone wondering, not the L & R buttons aren't in the same part compared to the original gamecube controller. They're in the place that Z would be, and ZL & ZR are in the part that L & R would be on the original controller. Which is good, since this controller does not support button mapping, BUT the back of the box has an error. It says that the L & R are in the part that ZL & ZR are and vice-versa.
Also, to make it work, you'll have to go to the Switch system settings, go to Controllers and activate "Wired Communication for Pro Controller".

Now to the controller itself, it feels good in the hands. All the face buttons feel great, the analog stick is not the same as the GameCube controller. It has a different feel to it but it's far from bad. The C-Stick feels alright, tho it also has a different feel to it. Both sticks are clickable, so you have the L3 and R3 buttons. The L & R buttons feel weird. They're not like the Z button in the original controller, in terms of looks, yes but they feel different and weird. ZL & ZR buttons feel weird. They don't feel as good as they should at all. They're perfectly usable, don't get me wrong but they're just not that great. This controller does NOT have HD Rumble, NFC or Motion Controls. Which, depending on the game isn't a big deal. The button layout is nearly the same as the GameCube controller, which depending on the game is bad. Since this controller does NOT support button mapping, you will have an issue in various games. It works great for games like Smash or Mario Kart, because the A button is the main button in those games, it works decently with games like Super Mario Oddysey or New Super Mario Bros. U Deluxe (this game does have an option to change running to B, but it afects every single player). It does NOT work well for games like A Hat in Time, because the B button is not very big and placed in a very different location compared to regular switch controllers. It's definitely a good controller, but not a good Pro Controller replacement. It also works on PC with no problem.
Verdict
HylianBran and raxadian like this.
Like this review 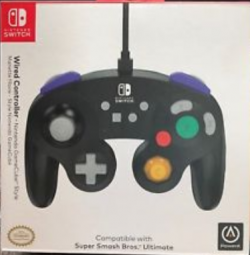