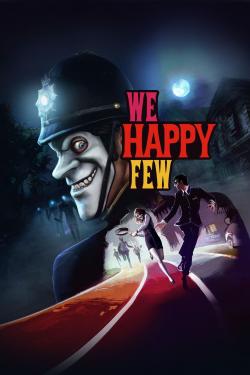 It’s about time we take a look at We Happy Few! The game that caused quite a bit of stir in Australia due to its depiction of drug use is now out. Let’s see if spending your time with it will end up being a joyous experience or not…

In an alternate dystopian ‘60s, the Battle of Britain was lost to Germany, leaving the country in a shambles and under German occupation. The people of Wellington Wells are somehow allowed to live freely following some terrible arrangement they had with the Germans. But this arrangement left such a scar on the citizens of Wellington Wells, that they are all subjected to consume a hallucinogenic drug called “Joy” on a daily basis. Joy has memory-suppressing and mood lifting properties, allowing the people to cope with their dark past. While not without side effects, the consumption of joy is promoted by the tight control of the media to depict their society as a colorful and cheerful one when in reality it is a fast crumbling one. The white “Happy Face” masks that you see in characters of the game are worn to show their constant state of happiness, essentially as fraudulent as the mask itself. It is with the same smiley face that others will force down a joy pill on "downers", those rebellious spirits refusing to take their "meds"... 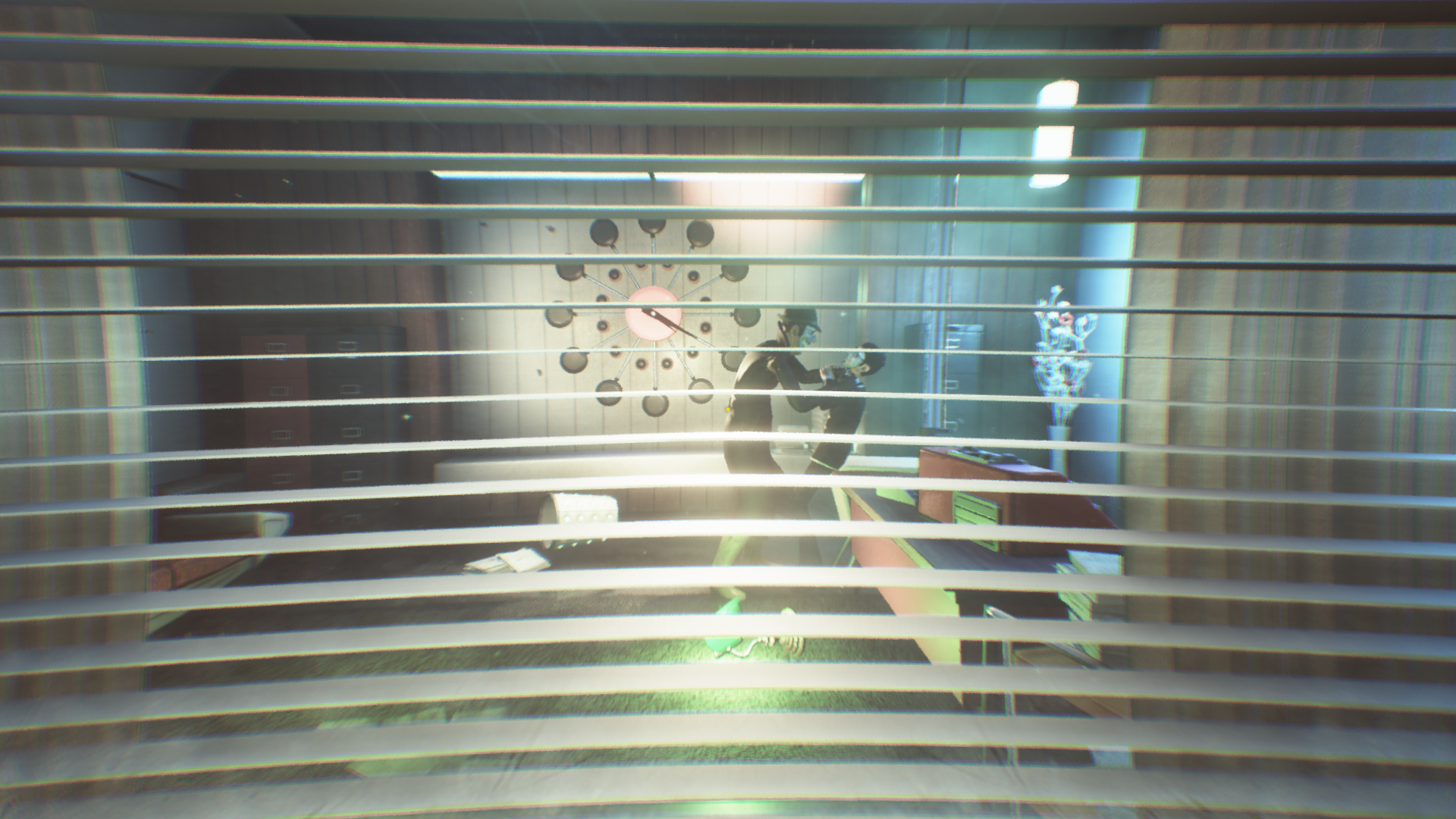 We Happy Few has not one but three protagonists who you control in arcs intertwined in a bigger story. Firstly you play as Arthur, a media controlling “redactor” who one day comes across a news piece about him and his long-forgotten brother Percy. He decides to learn more about the circumstances surrounding the disappearance of his sibling against all odds as he turns into a persecuted downer.

Then there is Sally, a chemist working on a new version of joy and childhood friend of Arthur. It turns out Sally is carrying a huge secret and requests Arthur’s help.

Our last playable character is Ollie, a former soldier of the British Army troubled by the death of his daughter. He also helps Arthur in his endeavors and further wants to wake the citizens of Wellington Wells from the illusion they live in, and help reveal the truth about themselves and their terrible past.

We Happy Few’s inspirations are apparent. The universe will feel very familiar if you’ve ever read George Orwell’s dystopian novel Nineteen Eighty-Four, with propaganda posters plastered everywhere and a Big Brother Uncle Jack spewing out even more propaganda on screen. The aesthetic and some gameplay elements will feel familiar for Bioshock fans, with its colorful, almost cartoon-like graphics in an alternate past, while the “cheerful” violence of the always-smiling NPCs on joy is reminiscent of A Clockwork Orange’s “ultraviolence”. Nevertheless the title manages to bring some originality with its plot and offering different perspectives as you change between arcs and protagonists. The narrative is the game’s forte by ingeniously tying the story of the individual protagonists and building on their development through recurring memories and collectible titbits. Environments are also telling of the bleak universe you find yourself in. On joy, everybody is smiling and joyful and even the surroundings are colorful and bright, but once off joy, the facade is apparent as ruins, graffiti, unkempt, suspicious people and dead bodies are the real landscape. 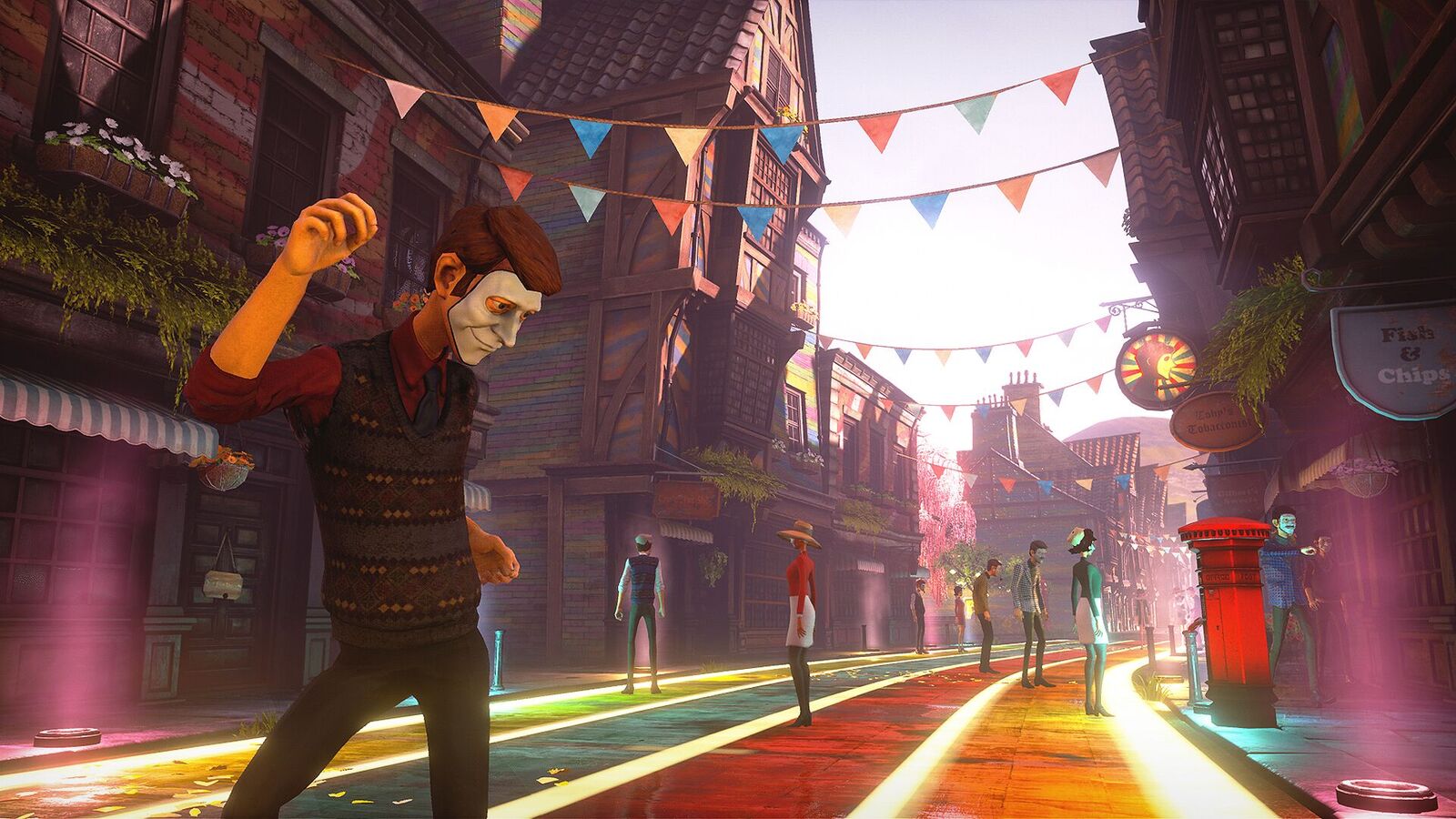 A key mechanic in We Happy Few is crafting, which allows the player to craft important items like weapons, lock picks and first aid kits. As such, you will have to explore to collect base items and while doing so you can even find rare weapons or items required to craft and such. The game relies on this mechanic a bit too much as certain key items might feel lacking in times of need just because you don’t have the required ingredients. I often came across the lack of items required to craft healing meds and I was left bleeding and limping. In those times, I found it easier to go back to a previous save and find what I lacked before progressing. 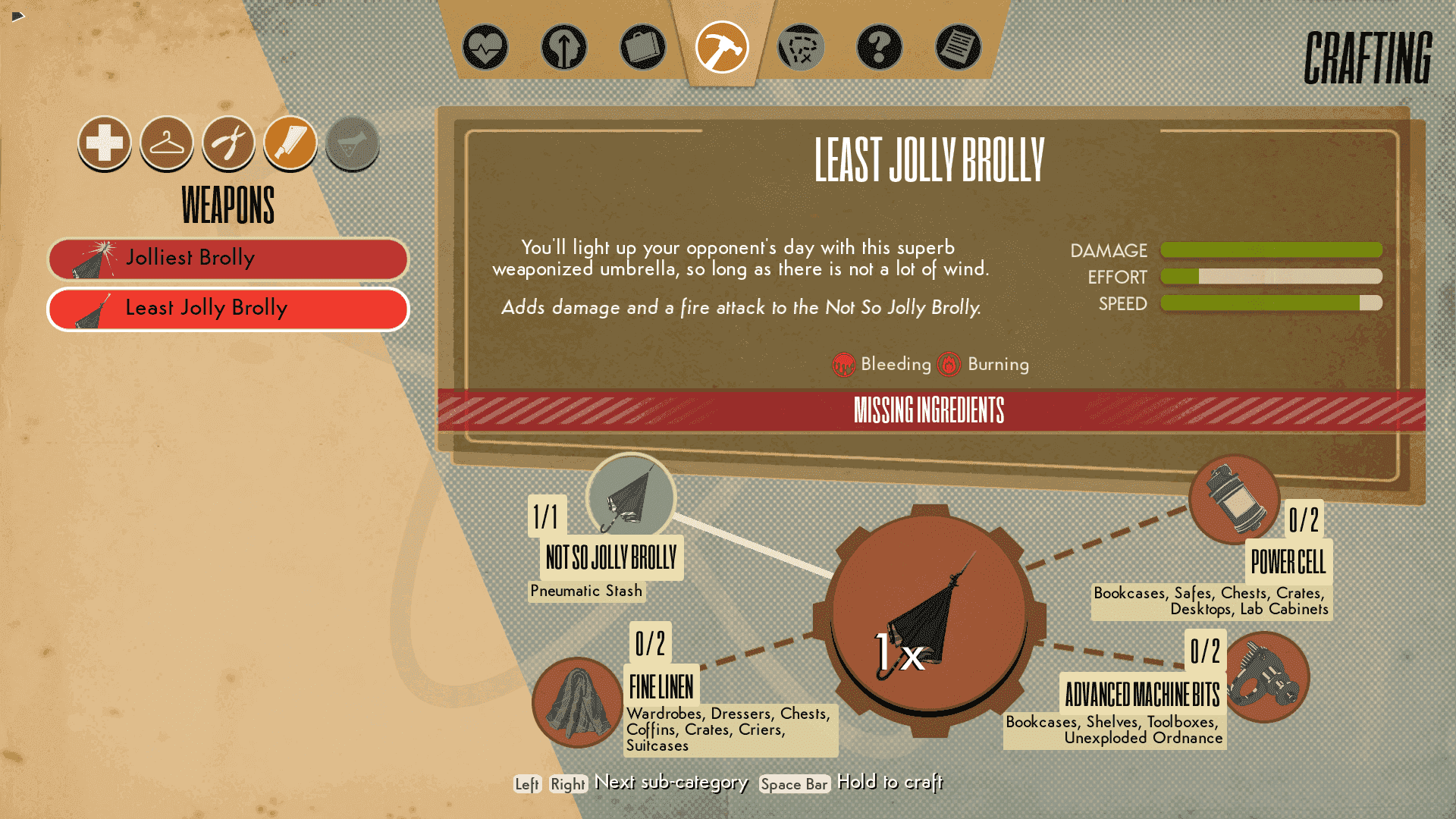 A welcome gameplay feature is the freedom of playstyle. You can opt for the safer, albeit slower, stealth route, or tackle enemies head-on. But most of the times you will use a combination of both. There is also a skill tree to hone skills you find more appropriate to your character and his/her playstyle; I found Arthur benefiting more from a stealth approach and Ollie from a more aggressive one. Additionally, you will have to pay attention to your character’s attire so as not to attract too much unwanted attention. You will have to switch between rags and suits according to the area you find yourself in, and even willingly take joy to prevent the Bobbies (town policemen) from growing suspicious and violently forceing you to take the drug, even if it is a matter of life or death... 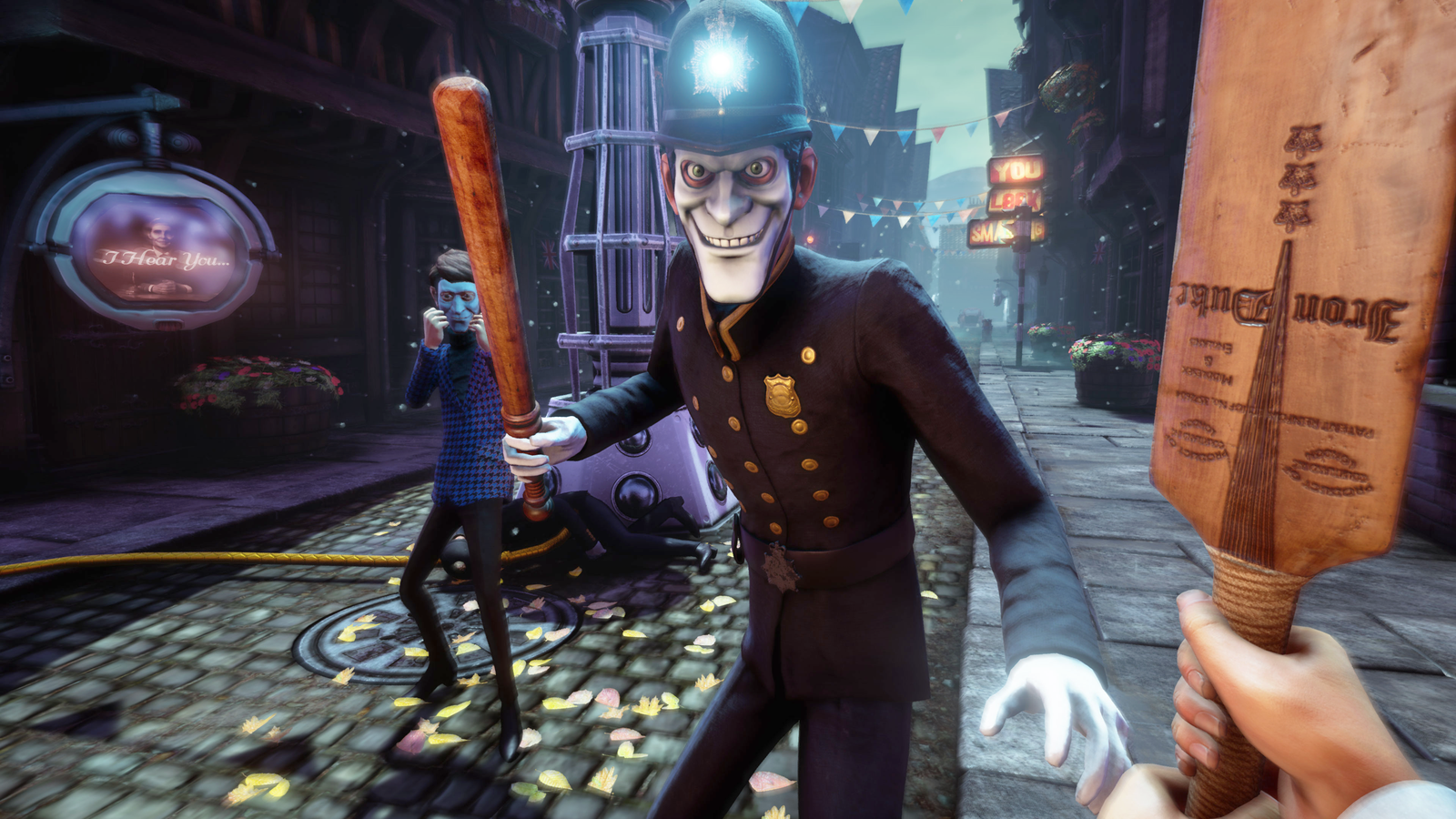 There is also a survival aspect to We Happy Few which strongly reminded me of the one implemented in Metal Gear Solid 3: Snake Eater. Depending on the difficulty level you choose to play the game at, you will have to pay close attention to several of your character’s stats. Hunger and thirst level can have serious repercussions on the player's attributes and can severely impact on your progress. Keep an eye out for water wells and food while you go out exploring as these will surely come in handy sooner or later. But don’t go eating anything out there as if you do eat rotten food, it might get you poisoned! Similarly, if you use dirty bandages to stop bleeding, you can get infected and will have to go through the extra step of using disinfectant. Understandably, in certain circumstances, you might not possess clean bandages or fresh food so you will have to willingly use the double-edged sword and go through the extra healing step afterward (if you have the required items of course).

Going a bit further with the survival modes, the developers have implemented an optional permadeath feature where should your character die in the game, you will have to start over. 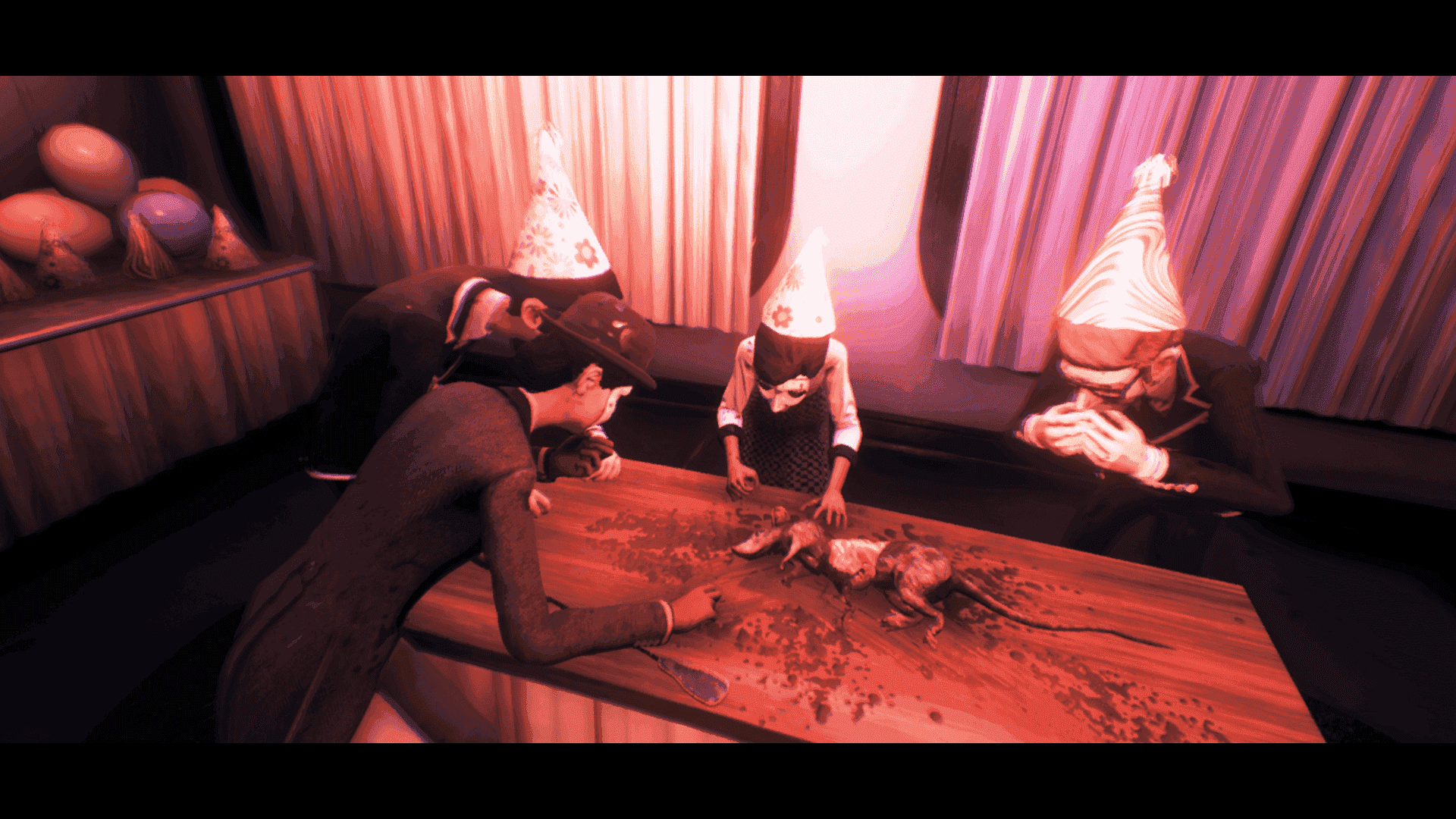 For a game Kickstarted back in 2016 and eventually delayed, We Happy Few is not without its issues. While procedural generation is supposedly taking care of certain areas of the game, many do look eerily similar and often got me thinking whether I was going in circles or not. Many of the NPCs’ animations appear bland, robotic and even repetitive. The “dialogues” they have among themselves if you eavesdrop conspicuously, play on loop, which can feel uneasy at times. Another let down are the graphics which look dated, even on a GTX 1070 on Ultra settings. Nevertheless, if you can overlook these issues and devote quite some time to this title, you will find a decent amount of joy (heh) to justify your purchase in this 20+ hour game.

Verdict
You, CaffeinatedOwl, linuxares and 2 others like this.
Unlike this review