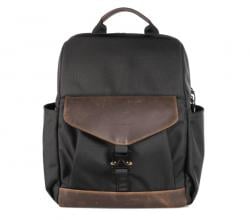 Backpacks are back, as we check out one of the fanciest kinds available.

Backpacks have always been something that interested me. When I was a child, I could never afford anything above the most bargain bin backpack Wal-Mart had to offer, and by the time I’d become a middle-schooler, you were only allowed to use a backpack inside the school building if it was mesh or entirely clear. Beyond that, into my high school days, backpacks were entirely discouraged from being used, in favor of carrying all you needed on your own; if you did deign to use them, you had to leave it at the door to the classroom. I offer this context, because once I’d finally graduated, the weird forces keeping me at bay from backpacks had dissipated, and I was free, for once, to use a backpack of my choosing.

While commonly considered something only students use, I’ve found that backpacks offer the perfect balance of portability, capacity, and comfort. Purses just don’t cut it when you need to carry around anything more than a phone, and though messenger bags look elegant, they also put all the pressure on a single part of your shoulder. Despite that, when you’re using a backpack outside of a schoolyard setting, you might stand out a bit, and traditional ones don’t exactly scream “professionalism.” Which is the allure of Waterfield Designs; they make backpacks that look perfectly at home in an office or business setting--anywhere, even.

Leather is a timeless material, having a quality, fancy appearance that sets it apart from any other average cloth, sporty backpack. With accented edges, a sturdy handle, and a very boxy style, the Waterfield Mezzo backpack looks almost like a briefcase upon first glance. Every ounce of the thing screams high-quality, and perhaps it’s just me, but when it came to the chocolate leather option, it was so stylish that I couldn’t help but think “ooh” every time I saw it, sitting on my desk, hanging up in my closet; it’s an accessory to your own appearance as much as it is a carrying device. Having something so premium is exciting, in a way, and even though it’s just a backpack at the end of the day, it’s easy to wax poetic about how nice it looks, feels, and just is. 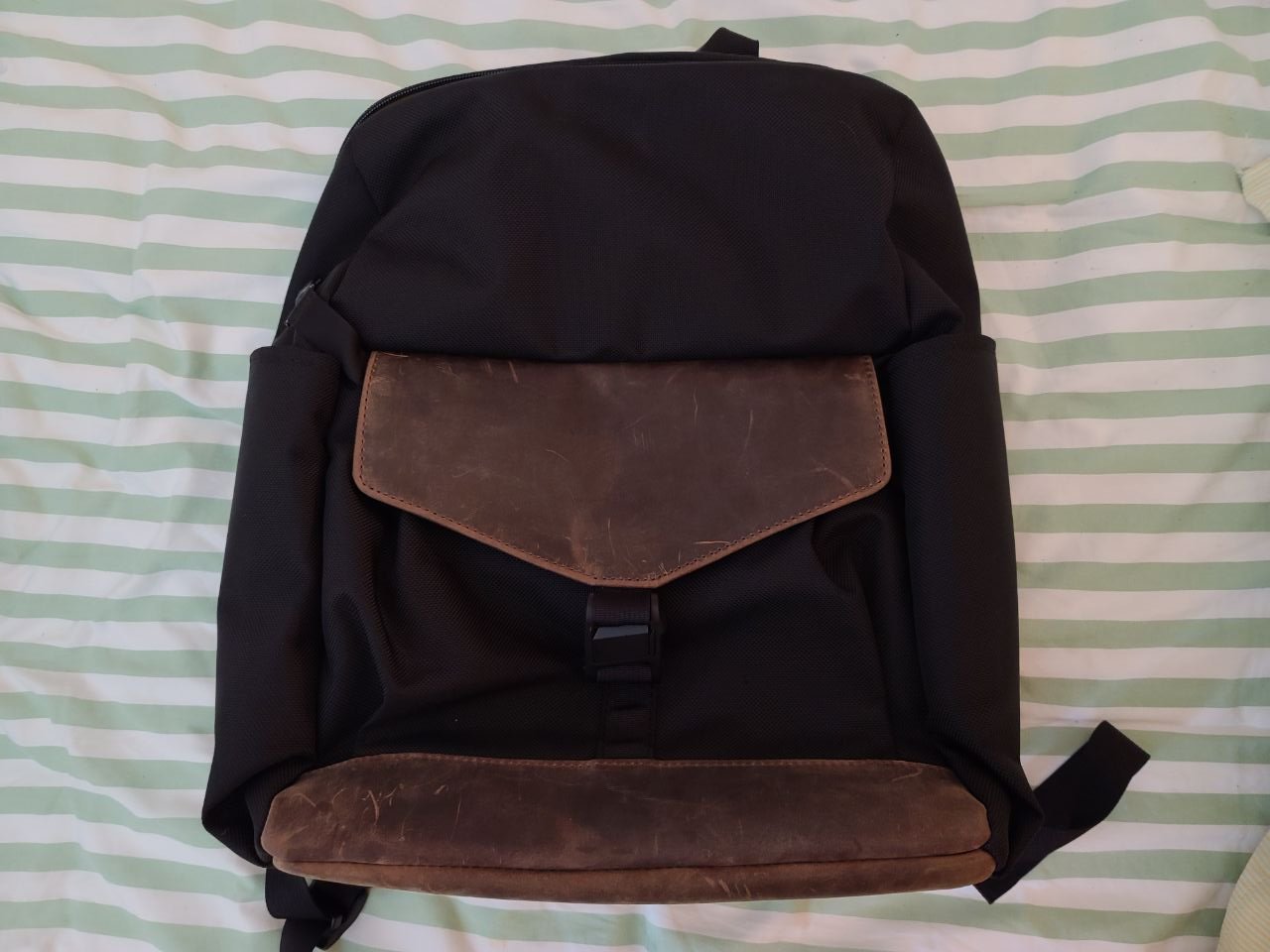 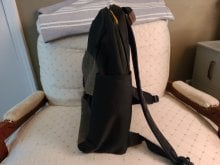 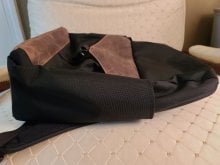 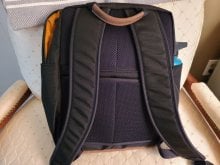 Now, with something so stylish, what would you use it for (besides the obvious answer of simply “holding stuff”)? The Mezzo is designed to carry your tech that you’d need on a day-to-day basis; notebooks, laptops, folders, the usual stuff. It’s a good mix of being slim, while still having enough pockets to keep all your stuff for work or school. There are a few backpacks out there that give you the same look as a turtle--gamer backpacks that exist for the express purpose of turning you into a walking tech armory. Waterfield’s Mezzo is less hardcore, in a good way; unless you’re traveling internationally, you won’t really need room for three laptops, two tablets, a portable monitor, etc, so the smaller compartments here are appreciated. Rather than pack too much, you’re able to fit just exactly what you need.

With lockdown still in place, I don’t find myself leaving my house all too often. Despite that fact, I packed up the backpack in order to test how it would function in a real-life scenario, once things go back to normal. In the main compartment exists two small sleeves, both of which have ultra-soft velvety lining. It’s deep enough to fit a 15” laptop in easily, with the second pouch being useful for a tablet, slim keyboard, eReader, notebook, or any similarly-sized object that you’d want to protect.

The most noticeable detail of the Mezzo is the level of quality detail all across it. All the stitching work is immaculate, from top, to bottom, to inside. It’s not a typically rugged backpack by any means, but it’s put together so well that I could see it lasting years without the materials ever being worn down. Another really nice aspect is all the zippers, with their weighty metallic clasps and smooth gliding. One of the most annoying things about backpacks is the zipper getting caught, or hitching at certain parts, but the Mezzo opens nicely every time. It’s the small stuff that really adds up to make the backpack feel every bit of quality that it is. 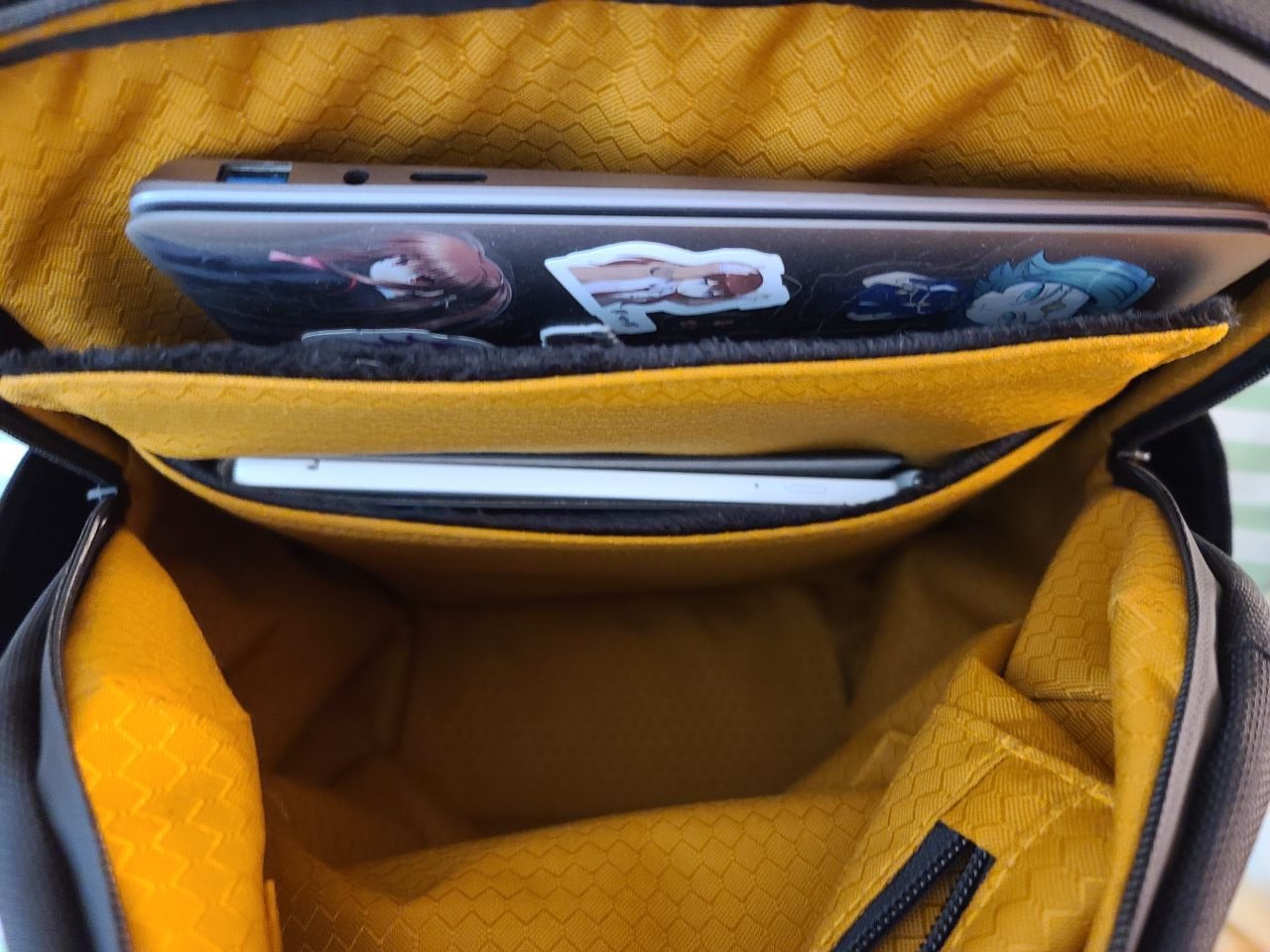 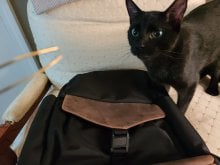 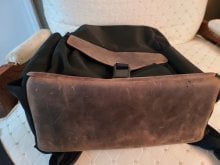 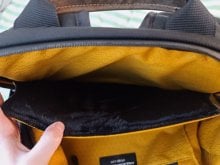 Because the Mezzo has a flat leather bottom, it stands up easily. So when you’re going through airport security, placing your stuff on a table, or just putting the backpack down after you get home, it stays upright and doesn’t tip over. Even though it looks small, you get some good volume out of the main pocket, too, since the bottom is flat, letting you pack more things in since it doesn’t taper, unlike most backpacks. In this part, you could toss in just about anything in--an extra change of clothes, your Switch, a party-sized bag of chips--you get a lot of room to work with.

You also get a second pocket, because what would a backpack be if you didn’t get a dedicated space to throw your little knickknacks into? A giant leather flap folds over the pocket, for further style points, ending with a clasp. The way it opens and closes is really cool; you hold the two clasps and pull them apart horizontally to unlock it, with magnets keeping them secured. It’s a really smooth way to open the bag, and since they attach magnetically, there’s never any worry about them coming undone. It’s also unique enough that if someone goes to steal something out of your backpack, they’re going to be confused by the mechanism, giving you a bit more time to hopefully notice what’s going on. The pouch either expands to have a lot of room in it, and yet another zippered compartment, or it folds entirely flat when unused, so it looks nicer when you’re traveling light. 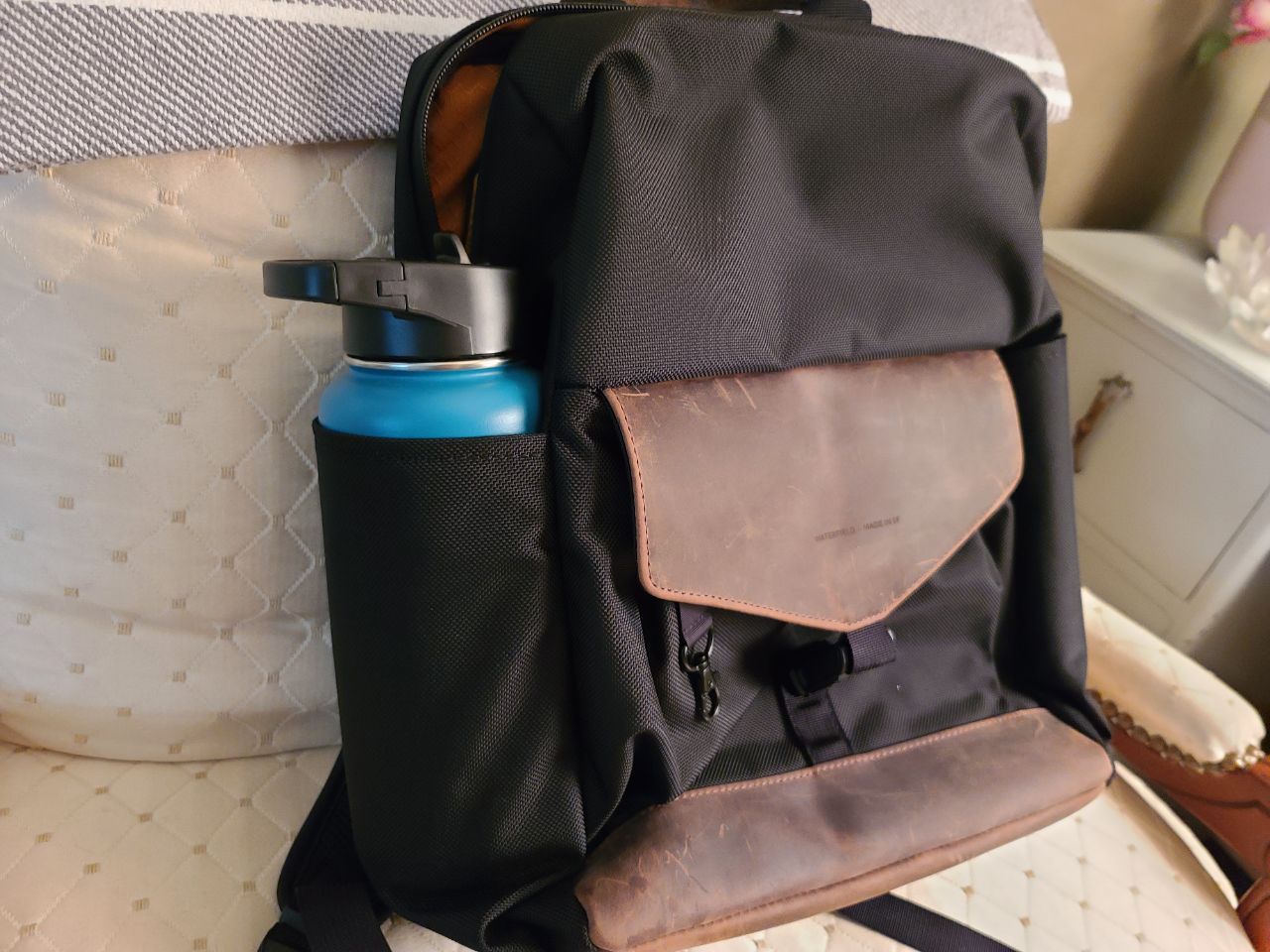 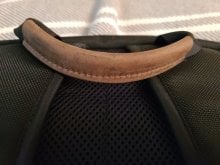 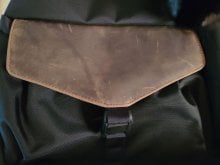 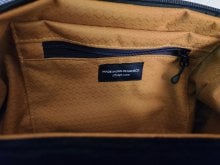 On the sides are two gigantic water bottle pouches, large enough to fit an entire 32oz Iron Flask into it. If you’re determined, you could maybe even cram one of those regular-sized wide-bottled Gatorades in there if you wanted, too. For being what appears to be a tiny backpack on the outside, the Mezzo is seriously great at just fitting more stuff than you’d expect. The back is also nice and padded, along with the straps, so if you do have to load the Mezzo up to full capacity, it’s still comfortable to carry on your shoulders.

I never expected to have such fanatical feelings towards backpacks, but the Waterfield Mezzo is such a nice, well-made thing, with so much utility without going overboard, that I just love it. It manages to perfectly balance being stylish with being useful, and looking so nice that you could get away with using it in any setting, professional or otherwise. At $299, it’s a mind-blowing price, but I’d argue that for something you’d be using on a daily basis, and something that’s quality enough to last for years if not a lifetime, and the premium materials used in it, the Waterfield Mezzo manages to be worthy of that price tag.

Sometimes, it's just worth it to go all-in and treat yourself to something quality and pleasing that you'll use for the rest of your life. If you've got the money and the need for a nice backpack, then the Waterfield Mezzo fits the bill nicely.
Reactions: MetallicKaiser, slimbizzy, SAIYAN48 and 5 others
Share:
Facebook Twitter Reddit Pinterest Tumblr WhatsApp Email Share Link
That’s really is startling cost!

...AND $50 for an extra pocket. Whut. Lol.
Reactions: gnmmarechal, Chary and Mama Looigi
$300!? Madness! THIS! IS! SPARTA!
Jokes on you, I don't even spend $49 on a whole-ass backpack.
Reactions: ZeroT21
How many backpacks do you need, @Chary? Didn't you review a 'gaming' backpack not too long ago?

EDIT: Whoops, it was @Scarlet who reviewed https://gbatemp.net/review/targus-strike-gaming-backpack.1730/, not you. My bad for misremembering.
Ngl, I saw the adorable black cat and instantly wanted to buy this product
Reactions: Jayro and Chary
i REALLY want this. REALLY REALLY WANT THIS.

i'm the kinda guy who bought a 600$CAD leather side bag and wears it with pride and joy everywhere i go. i would use this so fucking well and i really want it. i might get it, for real.
Reactions: Chary
The leather aesthetic of it definitely looks appealing. I've been looking for a slimmer backpack, so I'll check this out.
Reactions: Chary
Damn, I'd get this, but the price is really the only thing putting me off.
Reactions: Chary
I have had several of their items, you get what you pay for. They have the best zippers made anywhere bar none, IMHO. The leather is unbelievable too.
My only complaint is that if you see an item you like, better get it, while you see it because they do not guarantee to continue to carry the same items forever. They will suddenly stop selling successful items without warning. Same for (specialty) materials they use.

@ KenniesNewName: It's ok your mom made me straight 3 minutes ago
Chat 2