Single player
Local Multiplayer
Online Multiplayer
Co-operative
In Watch Dogs: Legion’s near future depiction, London transforms into a tech-fueled dystopia. As part of the resistance, do you have what it takes to take back the city by literally hacking the system?

In the future, as told by Watch Dogs: Legion, the classic nursery rhyme “London Bridge Is Falling Down” might need to be changed to simply “London Is Falling Down”; because this is exactly what happens after the capital of England is bombed in multiple locations in one night by underground group Zero Day. As a result, all hell breaks loose, London’s DedSec branch is put to blame for the attacks and the government employs gun-for-hire group Albion to track DedSec down and restore order.

Fast-forward to some months later and we see Albion operating around London without supervision, and, with the help of intelligence agency SIRS, the oppressive group has set up what’s essentially a surveillance state. Londoners are under constant monitoring, have their rights restricted while dissidents are silenced. Some are even realising DedSec’s setup and secretly wish to see the hacktivist group back to restore London to its former self.

But most of DedSec was arrested or killed by Albion and the group was nowhere to be seen, until one day Sabine Brandt, DedSec London’s operative, resurfaces to recruit a new DedSec agent: you. She tasks you to bring back the group’s A.I., Bagley, back online and rebuild DedSec by finding more recruits and ultimately put a dent in Albion’s and Zero Day’s plans so as to free London from their shackles. 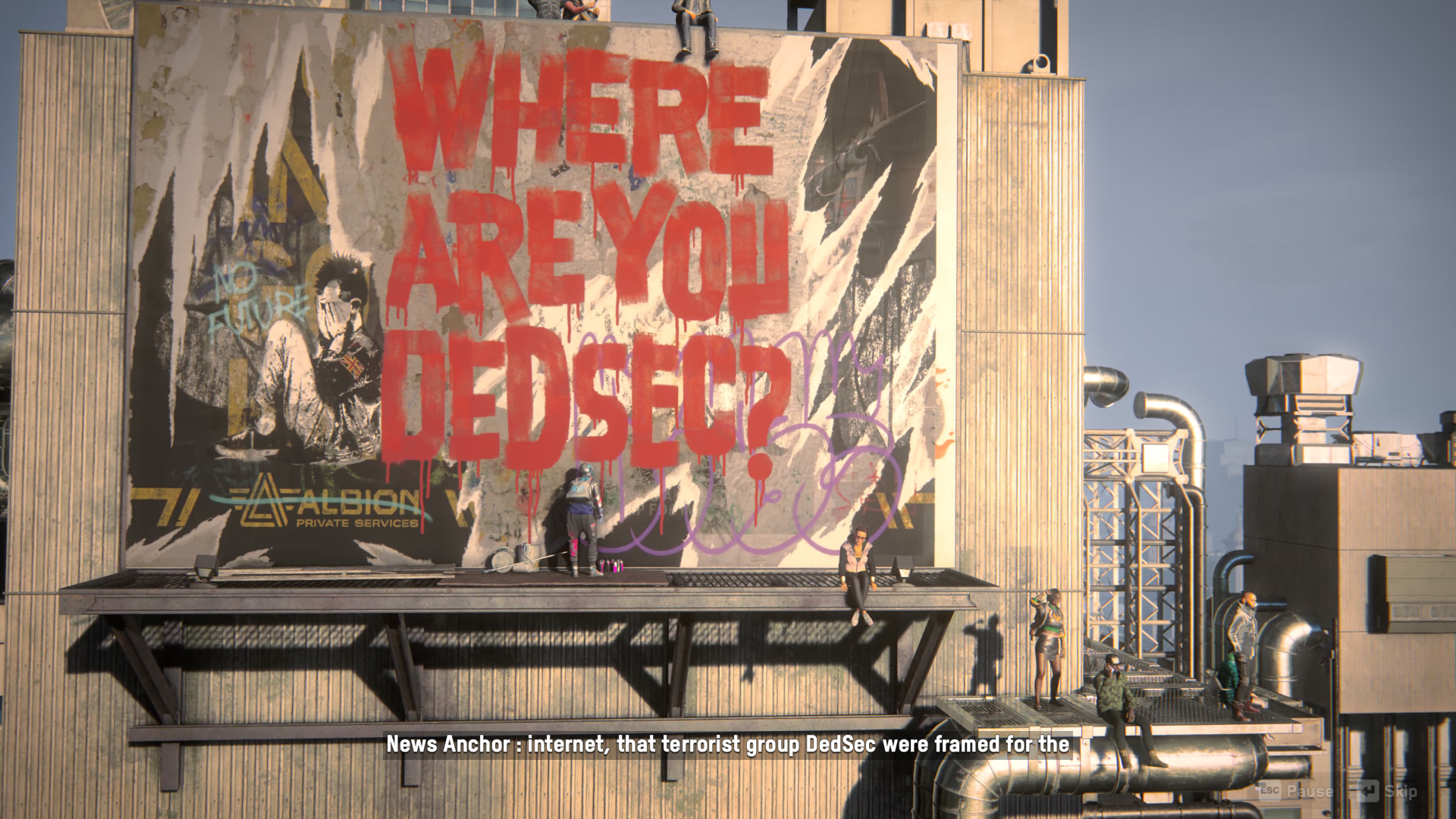 Plot-wise, Watch Dogs: Legion is fine for the most part; although it can get a bit confusing at the beginning, with wrapping your head around the multiple factions from Albion and SIRS to Clan Kelly and Zero Day involved in turning London into a sci-fi dystopia. But their paths all converge later on as you uncover the more sinister things at play. What I really liked was how well the city in which the story takes place is depicted. Having been to London around 2 years ago, I easily recognised the city’s iconic locations like Sky Garden, Camden, Palace of Westminster and more. Seeing these well-recreated sights brought back memories during my stay; and more than once I was grinning ear-to-ear saying to myself “I’ve been there!” or “I took that exact same route!”.

What made the presentation even more enticing was the believable sci-fi aspect. Delivery (and surveillance) drones patrol the skies while Londonners get on their routine; most of whom are hooked to their phones under monitoring. In fact, everything is under surveillance as most tech from cameras to driverless cars operate through a centralized computer network called ctOS. But it’s also the system’s weakness as hackers can break into ctOS to control drones, remotely divert cars and look into Londonners’ profiles for potential recruits. 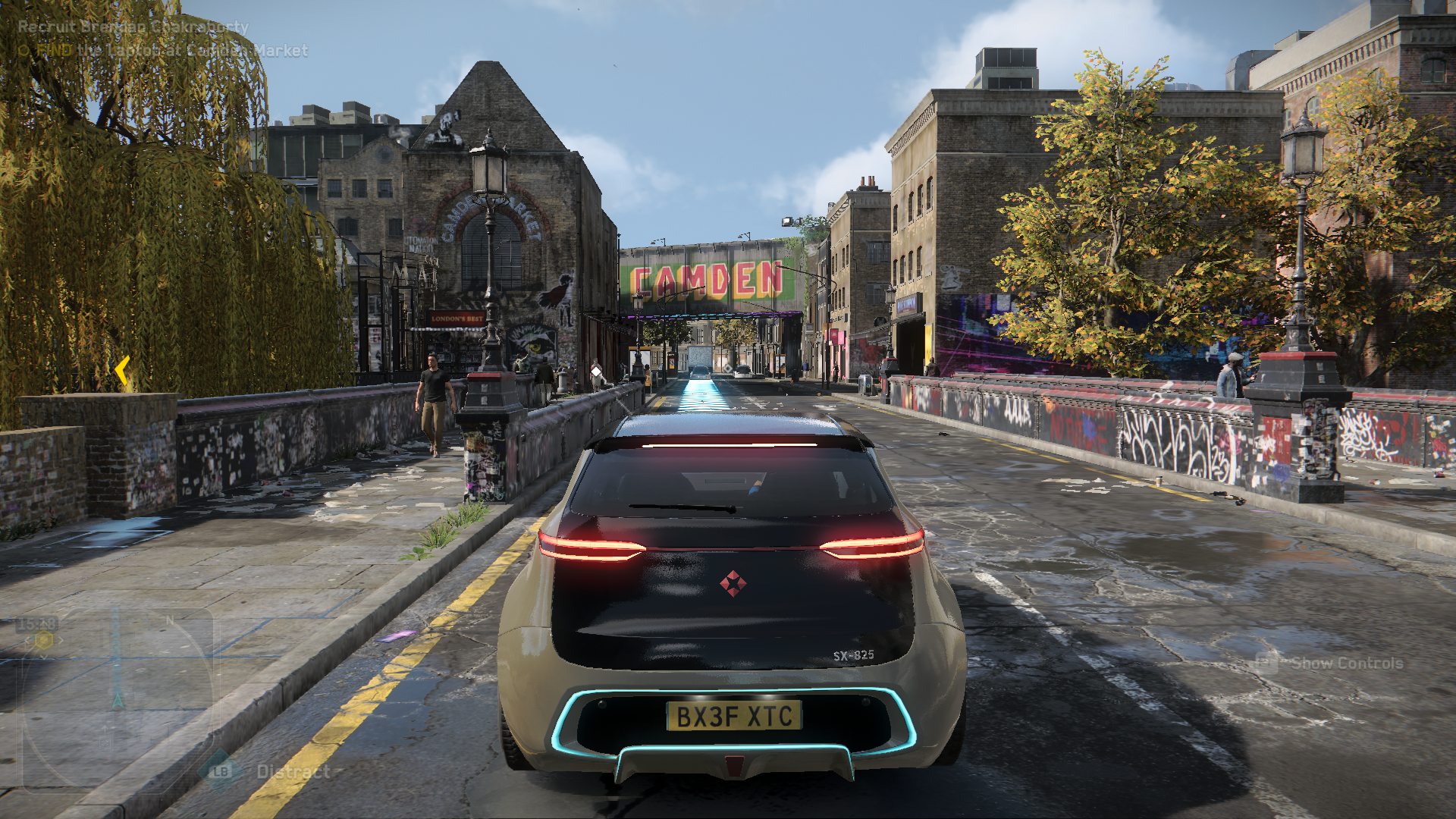 This brings us to Watch Dogs: Legion's highlight feature which is to be able to recruit and play as virtually any Londonner you come across. From construction workers to grandmas, most citizens will have a reason to join the resistance and engage in DecSec’s missions. You can do a quick profiling to determine whose skill would be best suited for the upcoming mission and recruit them. Some can summon cargo drones that allow your character to take flight while others are equipped with uniforms giving you free access to otherwise restricted buildings. Playing as those characters might make a mission easier and can prove to be assets for other missions as well but other operatives can also handle the situation with the tools at hand. In fact, you could stick to one character for every mission as these have a sandbox approach, allowing you to mix and match hacking, stealth and even CQC techniques to progress. This open-ended way to complete an objective is really welcome and adds quite the diversity to the gameplay.

This approach holds its fair share of fun, especially if you are into stealth games; but it’s not as diverse as say, Hitman 2 where the availability of possible routes are staggering and frankly more exciting. Nevertheless, in Watch Dogs: Legion, I did enjoy the tech-centric stealth mechanics. I had fun times hacking cargo drones and dropping whatever they’re carrying onto an unsuspecting enemy so that the way forward was clear. At other times, I found myself scouting the area by hacking cameras from a distance and get eyes where my physical eyes wouldn’t take me, wirelessly downloading access keys and locating the best entrance, which might even be on the other side of the building altogether. I also really enjoyed using spider bots to infiltrate into areas unawares and downloading files right under the nose of the enemy while my lazy hacker stares at her phone, controlling the electronic gadgets from outside the building.

However, Watch Dogs: Legion's novelty is rather short-lived as missions feel repetitive over time. Missions almost always involve infiltrating an area without getting caught and gathering intel one way or another. Sure the ways to do so are quite varied but over the course of missions, I was more inclined to stick to similar methods mostly because the characters I play as are ultimately all NPCs without much character development attached to them. This does not give the player enough agency to try a particular NPC’s method of hacking their way into restricted areas. One way the game tries to flesh out recruits is through the side quests they send you on before they join forces with DedSec. Even if they are also diverse, tasking you to steal some overpriced meds or find a missing person, they are rather simplistic and don’t do much in fleshing out characters. Most of the fleshing out is done on characters you’ll see in cutscenes or talk remotely to; and ultimately, you’ll be left playing as NPCs turned to PCs throughout the game that are mere cogs in the wheel of the bigger scheme of things. In this regard, I found Watch Dogs: Legion's standout mechanic to be a double-edged sword as it doesn’t help much in relating the player to the character they play as; especially given that it’s a story-driven title. You could argue that you'd make up the story of each NPC as you play and bond through the playthrough but really this doesn't affect the gameplay as the end result is the same, whoever you play as.

Moreover, a recurring gameplay mechanic involved solving puzzles by redirecting the power source, not unlike the Amiga’s Pipe Mania of yesteryear. Often you can’t access the area these puzzles are in or they are too high up or in locked rooms, so you’ll need a drone or spider bot to move the pieces. These do promote the mechanic of remotely controlling tech, but feel rather mundane and unimaginative, especially as many of those puzzles are mandatory parts of missions. 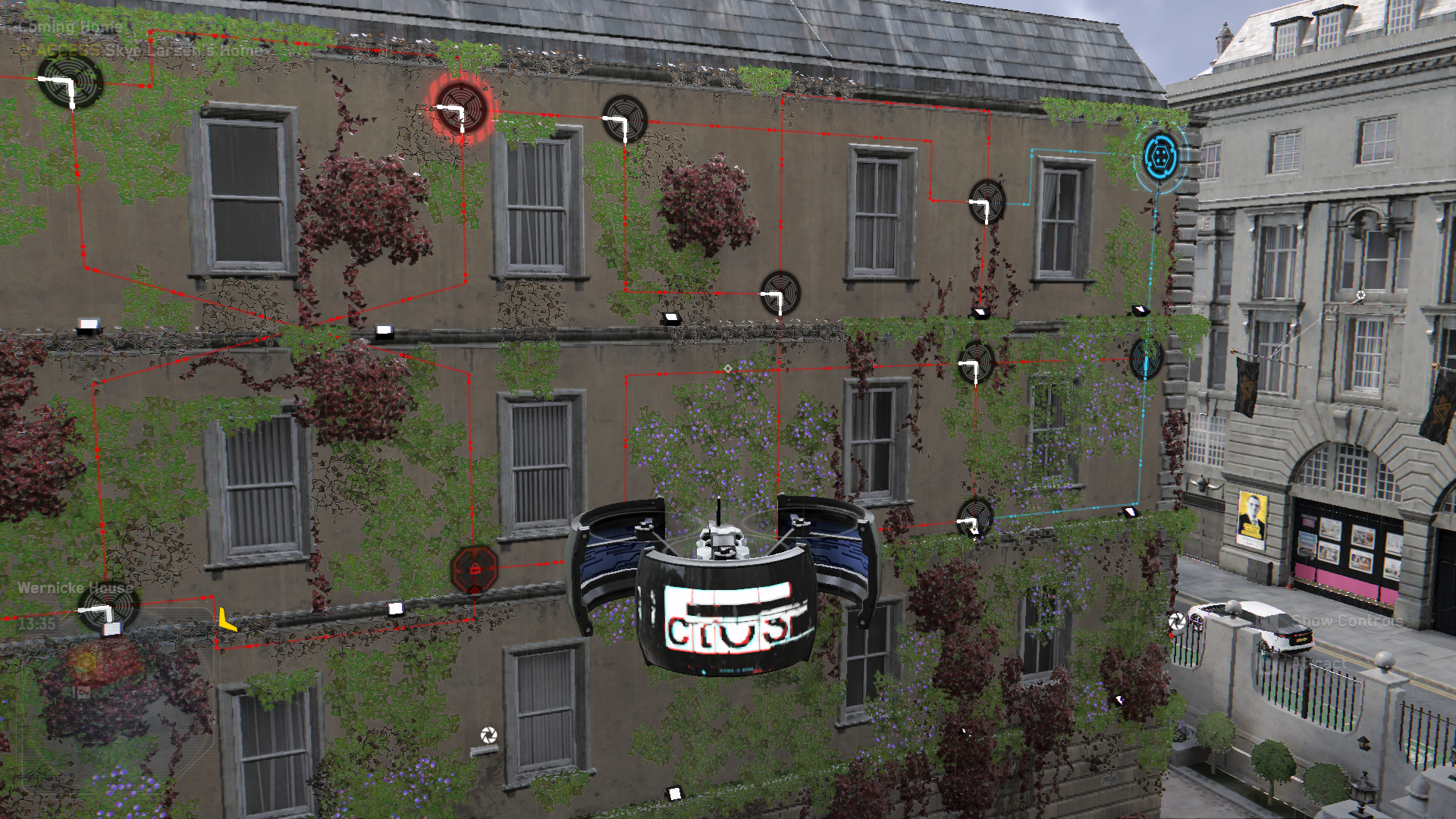 All things considered, Watch Dogs: Legion would make for an okay game with its novel approach with the ability to play as almost anybody in the game … unless if you are playing on PC. My rig exceeded the minimum requirement but I came across several bugs that can’t be overlooked. For one, when I drove vehicles, performance would drop significantly, unless I left the vehicle altogether. When travelling for long distances, this is not ideal and I still drove around in cars to reach far-off locations but the resultant lag and poor controls over the wheels would inevitably lead me to crash into innocent pedestrians, fellow drivers and more often than I would like, Albion baddies who would start a car chase; something that would not happen if I could drive the car normally. Even after tweaking the settings as suggested, the lag persisted.

Then I came across multiple random crashes where I had to reboot the game; and twice at the same area, after entering the Blume vault and that's what did it for me. There’s also an interminable load time when booting the game that lasts for 5-10 minutes every time. Even after multiple post-launch updates, these issues persisted. Others had even worse issues with loss of progress which I luckily didn't experience. For a a AAA game from a renowned developer, this does for a meager presentation. I could overlook some bugs as I did in Star Wars: Squadrons if the gameplay is captivating enough but this is not the case in Watch Dogs: Legion whose missions feel repetitive and its novelty is outlived rather fast. If you’re still interested in checking this game out, by all means, do so on another platform.

What We Liked ...
What We Didn't Like ...
7
Gameplay
Watch Dogs: Legion's innovative mechanic to play as almost anyone in London offers its fair share of fun but it’s rather short-lived as missions get repetitive over time.
7
Presentation
London’s near future, dystopian representation is marvellously depicted but the buggy PC version doesn't do it justice.
7
Lasting Appeal
Even with its sandbox approach that enables different kinds of play styles, the repetitive aspects of the gameplay, combined with the multitude of bugs in the PC version aren’t exactly the most enticing.
6.8
out of 10

This score represents the experience of the PC version which is, even weeks after launch, in a sorry state of buggy mess for many players. Nevertheless, Watch Dogs: Legion does offer some decent fun overall with its sandbox approach to missions and standout feature of playing as virtually anyone in London.
Reactions: Julie_Pilgrim, Xzi and Jiehfeng
Share:
Facebook Twitter Reddit Pinterest Tumblr WhatsApp Email Share Link
The PC port's performance is just bad in general. A 3080 barely hits 60fps at max settings with DLSS, sucks for someone like me who's used to high refresh rate gaming.
Reactions: Julie_Pilgrim, Xzi, Silent_Gunner and 1 other person
Oof...then again, this is Ubisoft we're talking about here. They aren't exactly known for being consistent with supPorting PC the best throughout the years...

...I will take my leave with a reminder that people who pirated Assassin's Creed II back in the day had a better experience than paying customers.
Reactions: Julie_Pilgrim, Payne and Jiehfeng
This game was so disappointing IMO, both in its optimization on PC (as Jiehfeng said, barely hitting 60fps with every maxed on my 3080 is just a disgrace, but expect with Ubisoft TBH) and just in general gameplay.

The idea of being able to "swap" between any operative you can recruit in the game world is a good idea in theory, but in practice was just an awful experience IMO. I didn't connect with any of the playable characters at all, and when you realize a lot of their skillsets aren't exactly super unique or useful 100% of the time you wind up just not caring if one gets killed off or put in jail because you can just swap to another real quick or recruit someone else with a similar enough build.

And because of that I sort of stopped paying attention to the story about halfway through, especially when they started introducing "choices" that literally changed nothing in the story like choosing the fate of Skye Larson. Spoiler alert, literally no difference between whichever one you chose, which was pretty dumb after all the "build up".

Would've been better off with just a limited operative set like GTA 5, giving you a choice between characters that had distinct differences in personality and play styles that you could actually connected with. Oh well, at least I got it for "free" and didn't have to pay for it :/
Reactions: Julie_Pilgrim, Jiehfeng and Xzi