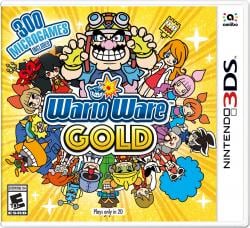 WarioWare Gold is a fun action-packed microgame collection with Story and Challenge modes and a whole lot of collectables! Let's jump in!

The game's banner music is a short fanfare and the banner shows the logo with a WarioWare bomb above. The opening cinematic is a great intro into the story of WarioWare Gold, where Wario steals a gold "crown" however is broke and opens up a gaming tournament (the Wario Bowl games) by selling microgames after seeing Super Pyoro on the news. He gets the games by scamming all his "friends" (all the characters in the WarioWare universe that are relevant). You get three save slots and can choose your Mii when making one. Story Mode starts with three stages, all Wario, that are intro games to the league then introducing the rest of the characters. All the leagues (Mash, Twist and Touch) push the boundaries of the 3DS, showing how you can have fun with only the D-Pad and A button, Gyroscope or Touch Screen! The types of games are Intro Games, Sports, That's Life, Fantasy and Nintendo during the normal three leagues. After you beat all the leagues, you will get the first Ultra League (All leagues with Mic/Blow League included! Introducing Mike and Fronk to the WarioWare Gold story as microgame makers!) microgame collection Dancing Team, with all the Sports & That's Life microgames after beating that you will get the Potluck Gang, Nintendo (Classics) & Fantasy with Mike and Fronk games too! Finally after Wario puts on the gold "crown" that Lulu from Luxeville (where he stole the crown from) is trying to get back, Wario goes crazy with power and money becoming Wario Deluxe. You have to beat 24 microgames and a rhythm beat boss stage (that got me the first few times until I started saying the key presses out loud in time with the beat). After Wario Deluxe, you have finished the story mode, giving you little to no reason to come back however! There is also Challenge mode! You can play all the microgames mashed up, action-packed microgames with only one life and tons of microgames at fast speeds! There is also Wario Watch which plays microgames at a timed pace at the top screen and the scariest mode, Sneaky Gamer! 9-Volt is playing games in bed (also his design in Sneaky Gamer is different from his normal design, odd) but 5-Volt is being strict. She is also the devil apparently, able to lift up 9-Volt's entire setup, run up to the door, walk to the door while humming the Mario Underground theme (think World 1-2, footage courtesy of YTSunny) and jumps out of 9-Volt's TV and walk slowly around the room while devil's background theme is playing and then goes to watch TV and lets you play games (footage courtesy again of YTSunny). Also if you watch the footage for a bit you can see her jump to 9-Volt's bed. Creepy stuff right here. There is also Wario Interrupts, basically Wario Deluxe but he farts over the screen or does something else to distract you from the game. Cruise Controls is just Dribble & Spitz's microgame collection but you tilt your system to speed up or slow down your games. Split Screen is just microgames with a Kat and Ana twist on switching between screens and Battle Time, microgames but local multiplayer! I can't play as I have no friends who have 3DSes that live around me ¯\_(ツ)_/¯. The Arcade has crap tons of collectiables! The studio section in the Toy Room let you dub cutscenes! I prefer sub tho. If you have beaten story mode you probably alredy have all the Movies. There is Cards for character Cards, Minigames for cool minigames, Phones for calling people, Nintendo for your nintendo collection (mine is almost full!), Records for listening music (some japanese versions too!) and Misc. for misc stuff like microgame alarm clocks, Wario's amiibo sketch, 3D models of all the 3DSes, an Orbulon voice changer which isn't actually as good as Orbulon's voice, Staff Credits if you have everything in Story mode and Challenge mode on a toilet roll and a love tester (I have no love interest so I can't give less of a care)! So that was everything! What's my verdict?
Verdict
oofio and DSSP like this.
Like this review