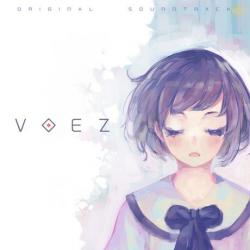 $25 / €21 for a Nintendo Switch port of a free-to-play mobile rhythm game. Is it really worth it?

The fundamentals of a rhythm game is to play along in sync to some music. There's not much room for deviating from that formula when it comes to this type of game, forcing the developers to use their creativity to make the game feel relevant. After releasing Cytus and Deemo, two well regarded rhythm games for mobile devices and the PlayStation Vita, Taiwanese developers Rayark Games released VOEZ (pronounced Voice) for iOS and Android in the summer of 2016. They went the free-to-play route together with addictive gameplay and a high quality soundtrack to hook many fans all over the world. Now it made its way to the Nintendo Switch.

VOEZ was ported for the Nintendo Switch at launch as a downloadable title for $25, £18.99, or €20.99. Is it worth the price? The short answer is yes. The longer answer is that while the mobile app is free, you have to unlock the songs with keys. You do get some keys by playing the game, so I unlocked one extra song apart from the free starting song. I would need 113 keys to unlock the rest, and by buying the cheapest bundle of keys via micro-transactions (2 times 55 keys, 1 extra key, along with the 2 keys I earned by playing) that would end up in $95.
So is the $25 asking price for the Switch version fair? Yes, yes it is. It's worth noting that this is a touch screen only game, so it can only be played in portable mode. Another point worth bringing up is that the mobile version has an always online requirement, which the Switch version doesn't have.

So what about the story, gameplay and music?

Now that we've concluded that the price is fair for the content, what about the game? It starts out with an anime style intro video showcasing the story's characters in their everyday life, very calm and soothing together with the main theme of the game, Colorful Voice.

The story revolves around a group of high school students eventually starting a band. There are the usual high school tropes here: someone good at baking, someone quiet but warm, and of course there's love, exams and friendship.

Now you're thrown into the menu of the game with the previously mentioned main theme as the only available song to play. After you've played this song, every other song gets unlocked straight away - all 115 of them at the time of writing, even more will be added in the future. By now you'll also have your first diary entry unlocked, which is how the story is told through this game, and the first diary entry is a still image. A very pretty still image though. Further entries are unlocked by fulfilling goals; playing a certain number of songs, achieving a certain total score, and so on. The diary entries will all have pretty images, and some will feature chat logs between characters, blog posts and notes. This is what's pushing you forward when it comes to the story of the game. There's no career mode or story mode, it's all free play for better or for worse. I feel that it's very liberating to be able to play any song I like, on any difficulty level that I want - not being forced to play a number of songs that are too easy, or being stuck on any particularly difficult song, before I can move on. This comes at the cost of a well thought out progression through the tracks, or having the songs following the story. It's a matter of taste ultimately, and I find it sweet as candy. 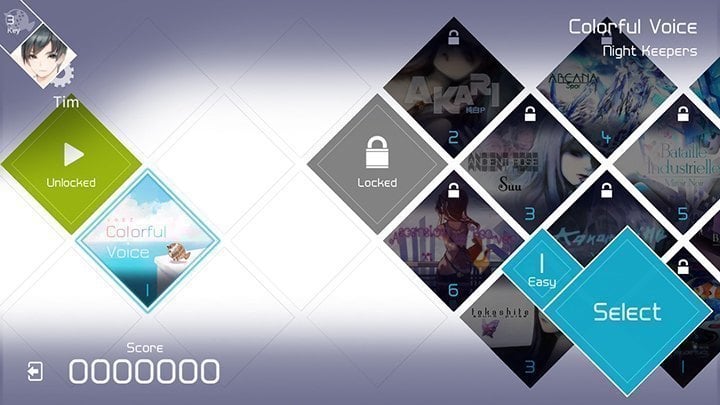 Each song has three difficulty levels: Easy, Hard and Special. Easy is great for learning the songs, while I find Hard to be the perfect challenge for regular play, since it's a little bit more advanced but still manageable. Special adds a lot of challenge to the mix, playing advanced drum fills with one hand while playing the melody with the other for example. The songs also have a difficulty number from 1 to 16, describing the difficulty of the song itself. These two difficulty levels can overlap at times, where the most difficult Easy song is an 8, and the easiest Special song is a 9. There's something for everyone here.

But how is the actual gameplay then? As many other rhythm games, there's a horizontal line at the bottom of the screen, and notes fall from the top. The notes are the genre classics: tap, hold, swipe and slide. They follow so called "note lines" which are vertical bars guiding the notes and let's you know where to tap on the screen. What makes this game feel more unique is that these note lines are dancing to the songs, changing places and colors, growing and shrinking in size, and it's all very fun. Nothing is random, but very well planned to fit the beat of the music and style of the song. For me, that's evidence of a high quality game.

There is a wide variety of songs to play, all made by independent artists from Taiwan, South Korea and Japan. Everything from slow piano ballads and soft pop-rock to heavy industrial hardcore techno, and a lot in between. Vocaloid style pop songs, high energy anime intro styled songs, 8-bit video game styled music, dubstep... There's something for everyone, with the exception of metal fans. The sound quality is good, I haven't noticed any apparent compression artifacts when playing. Every song comes with a unique splash screen made by different artists, which is blurred in the background throughout the song. Thanks to this there isn't anything distracting your gameplay, and it's positive if you aren't a fan of the anime aesthetics other rhythm games may have. No dancing anime chicks anywhere. 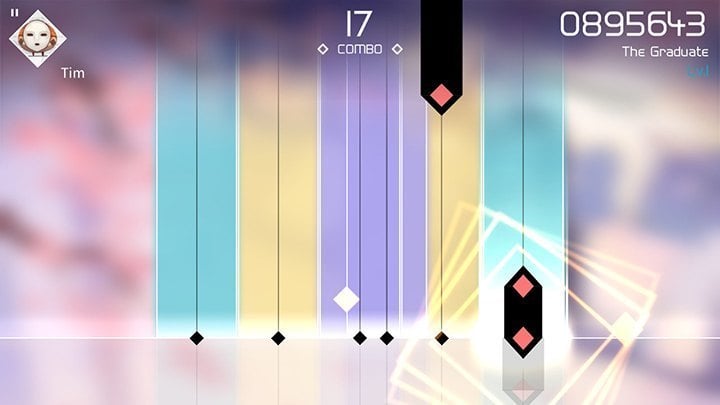 When completing a song you get a rank: S, A, B or C. You will at least get a C when you play a song as it is impossible to fail a song. I don't think this is a bad thing, as it always lets you try the whole songs, it will never force you to start over. Also, if you just want to listen to a song without playing - this makes it possible.

When unlocking the diary entries you also get keys, the same keys used for unlocking songs on mobile phones - but what's the use of them here? You can use them to unlock player icons. Pay one key, get three random icons from a set of 264, and they don't affect anything else in the game. A fun little extra for completionists I suppose.

Now, while the story is cute there is one huge flaw with it. Most of the story is actually only available on the developer's website. Every diary entry already unlocked there, but with a light novel text to each entry. The web version and the game version of the diary entries complement eachother. Also, the character biographies are available only on the website, so that's where you have to go if you want to know who's who. Why this isn't featured in the game is beyond me. While I'm at it with the negativity there are a few weird (but very minor) quality issues appearing here and there. The use apostrophes in "Don't" and "Don´ t" as part of diary titles just a few entries apart, someone should have noticed this.

Finally, I wish there were more ways to sort and organize your songs. As it is right now, you can sort them by difficulty number or alphabetically. It would be great to have more options here, sorting by BPM (beats per minute), sorting by songs you've played or not, sorting by achieved ranking, saving favorites or maybe even being able to rate the songs. 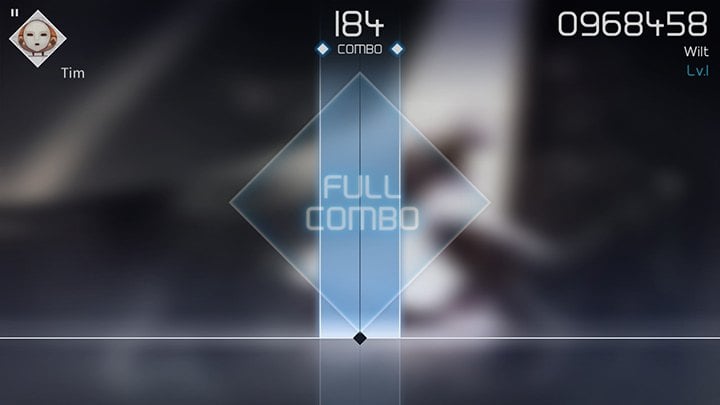 Given the huge amount content for the price, especially considering the lack of titles for the Nintendo Switch at this point, VOEZ is highly recommended purchase if you enjoy rhythm games. The flaws are relatively small and few, and hopefully might be patched one day in the future to streamline your gaming.

Verdict
You, gnmmarechal, Lycanroc and 7 others like this.
Unlike this review