Haven't used charging stands like this for a very long time, perhaps last on PS3, is it useful/necessary?
Vertical charging stands aren't the most obvious choice for the must have gadget to go with your console, but will this change my mind and give me a new perspective?

Venom is a third-party peripheral manufacturer who thinks outside the box while brainstorming ideas for the latest must-have accessories. You can tell that they consider form and function simultaneously when creatively innovating their gadgets in such a way that everything is multipurpose, simple to use, and incredibly handy to have at your side. 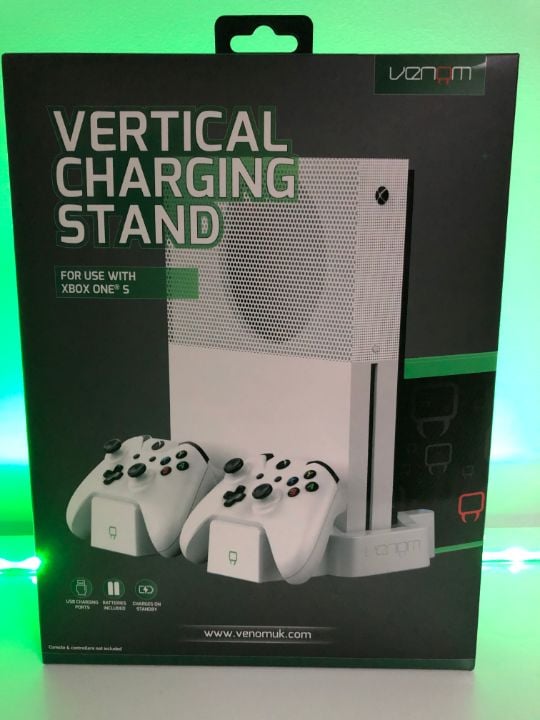 Out of the box, this gizmo is rather impressive with well-packaged individually-compartmentalized items, making the unboxing process a breeze. Each battery is perfectly vacuum-formed into its section and that section is then nicely pressed into the next one keeping it all solidly packed in and well presented. This product is primarily designed for the Xbox One S model console, hence the white colour theme, though an Xbox One X does actually fit in and is fully compatible; there is absolutely no way you can use it on the OG model, it simply wouldn't fit, not by any stretch of the imagination. Putting it in numerical dimensional form: the original Xbox One is 333 x 274mm, the Xbox One S is 295 x 230mm, and the Xbox One X is 299mm x 252mm. The base station fits the Xbox One S's 295mm x 230mm stature so snugly that there is absolutely zero wiggle room. To the untrained eye, it looks as though you simply stand your console on the base station rely purely on gravity to hold it in place, however, the unit actually employs four funneling gripper clips into which you press the console. Once you do they then expand and secure the console to the base. In my opinion, there is absolutely no way you could accidentally knock your beloved console over while it's docked into this station, it's incredibly solid. Removing your console from the charging station is quite tough to do as it is clamped in so well, but with a slight tilting motion it comes out with a satisfying pop. To the rear side of the unit, you get a built-in (read non-removable/non-replaceable) USB connector cable to pass-through the power from one of your USB sockets on your console to power your chargers and the two additional USB sockets on the charging stand. It's nice to have a USB hub and charging options coming from just one USB socket, so no additional power supply is required. 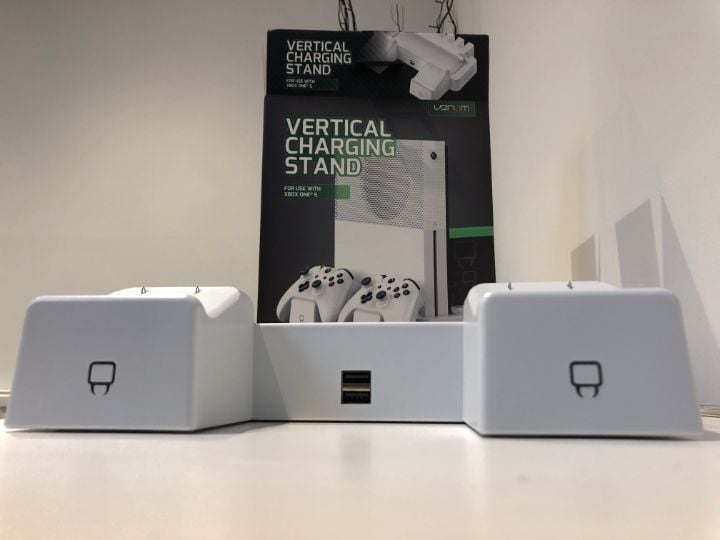 The included battery packs, though obviously the third party, fit well into the rear of your control pads. They aren't too difficult to get in or out, which is a common complaint with non-first-party battery packs. Having inserted them into your controllers you have the ability to charge them without using cables and without having to ever open the battery compartment again thanks to two electrical connectors built into them. This is pretty standard fodder for third party rechargeable batteries now, with typically two or three small metal pads built in so that they can be placed into a charging plate with corresponding metal connectors that touch those battery pads when rested against them. To the side of the Charge Stand we have two of these clad with the Venom Logo and indicator LEDs we have come to know and love from Venom products. This Venom Charge Stand also allows you to charge two controllers while your console is on stand-by; no cables are included so that you can "play & charge" however, something I find to be an odd omission for this product. Having said that, Venom do flaunt an 18hr play time on those battery packs that I can happily attest to. It was close to 16 hours of play time on Wreckfest, Gears 5, Human Fall Flat, and Just Cause 4 before I actually caved and felt guilty for purposefully not juicing them up for so long. It strikes me that this is a more "preparation and tidy" type of product than a continuous play promoting accessory which would typically cater towards an extended play-time ethos. Bolstering this is the fact that there are six slots on the rear for slotting your games into, and it's a well-spaced layout. While it is undoubtedly neat, it takes up more space than it realistically has any right to. For example, six Xbox One cases stacked on one another takes up 72mm in height when laid down on a surface. When inserted into this stand they take up an additional 75mm thanks to the 1.5cm dividers, so the total volume taken up would be 147mm up from just 72mm. That is a little over twice as much space just to store games. This is not to mention the fact that not only is the console to be set up vertically, the games are to be stored vertically too, which is unorthodox looking but I guess simpler to select a game from that configuration more easily, depending on the orientation of the unit. Every way round I positioned it, I found a slight awkwardness. Be it grabbing games from it or accessing the pads, I couldn't find the perfect way round to suit my habits and access the additional games from the slots. It's probably just me being me, pernickety about a minor thing, but to be honest I just took the games out of the spaces and kept them elsewhere which I found much more compact and convenient, but less tidy, obviously. 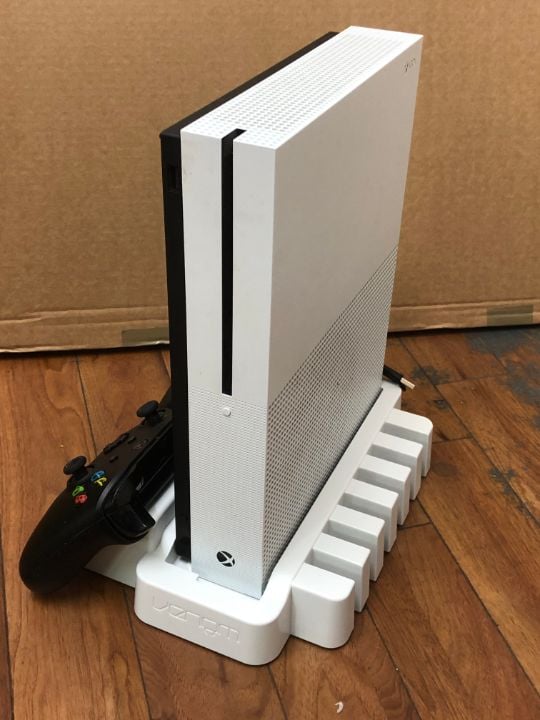 Personally, I cannot see that this kind of accessory is necessary or essential. I thought that spending some time with this might change my mind, but while it's definitely smart I just can't justify the scale of this thing in my lifestyle. If like me you value the space under your television set as a precious and ever-decreasing commodity, you would not be picking this product anytime soon. I could however see the average consumer or people with just one Xbox One S or X console in their life finding this a superb addition to their entertainment center, and using it day in day out without complaint to display their console and six favourite games in all their vertical glory. 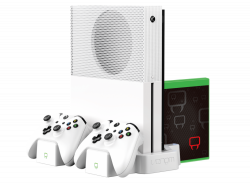