With other recent attempts to kickstart interest in grid-based games, notably the Legend of Grimrock series, I was intrigued to see how this one fares by comparison. Will it hold my hand too much in order to ease new players into the genre, or will I need hundreds of pages of quadrille paper to survive to the end?
The grid-based RPG is a classic genre with roots in the PC, how well can it be adapted to modern consoles?

Vaporum, which bills itself as 'Steampunk Dungeon Crawler,' quietly slipped out of the release gates on to Steam on September 28, 2017.  Nearly two years later, it's ready for its copper-encrusted debut on consoles. 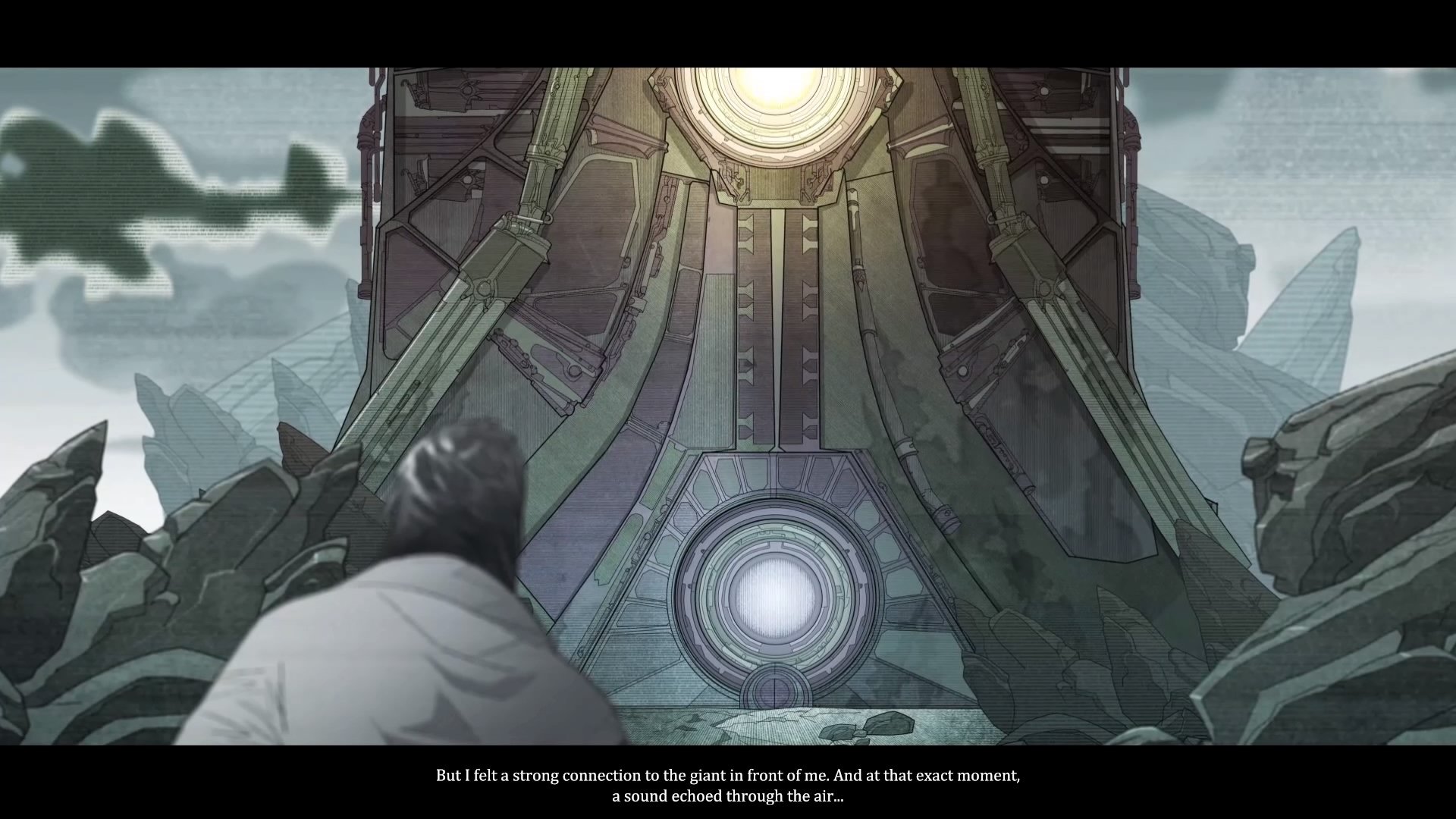 After setting the game options to my liking, of which there are quite a few, the game opens on a cutscene in a rather painterly style.  We learn that the main character has washed up on land somewhere, seemingly devoid of memories.  Amnesia is perhaps an overused trope in video games, but after progressing some way into the game, I did find its use here somewhat justified for the sake of the story's pacing.  For the main character, whose identity is revealed early as Marcus Rike, written and audio logs you find as you play trigger old memories, and the story slowly becomes more and more personal to him and his family as a result.  There are a couple twists along the way, on the topic of which I'll simply say one you'll see coming a mile away, the other is much more likely to blindside you.

Once in game, you're introduced to the concepts of melee and ranged combat, gadgets, and the essential time-stop mechanic through tutorial dialog boxes.  Given that games like these are usually designed around a PC control scheme, things can get a bit unconventional.  For example, you hold L2 and press the options button in order to quicksave.  L2+D-pad up activates time-stop mode, which freezes the game between combat/movement actions.  R2+X is used to make the in-game pointer appear and interact with objects in the game world.  Some of which are hidden and have to be hovered over manually.  It's not overly obscure, but it does take a bit of getting used to.

After perhaps ten minutes of exploring and acclimating myself to the game, I stumble upon a room which allows me to choose one of four classes, or "rigs" as the game refers to them. 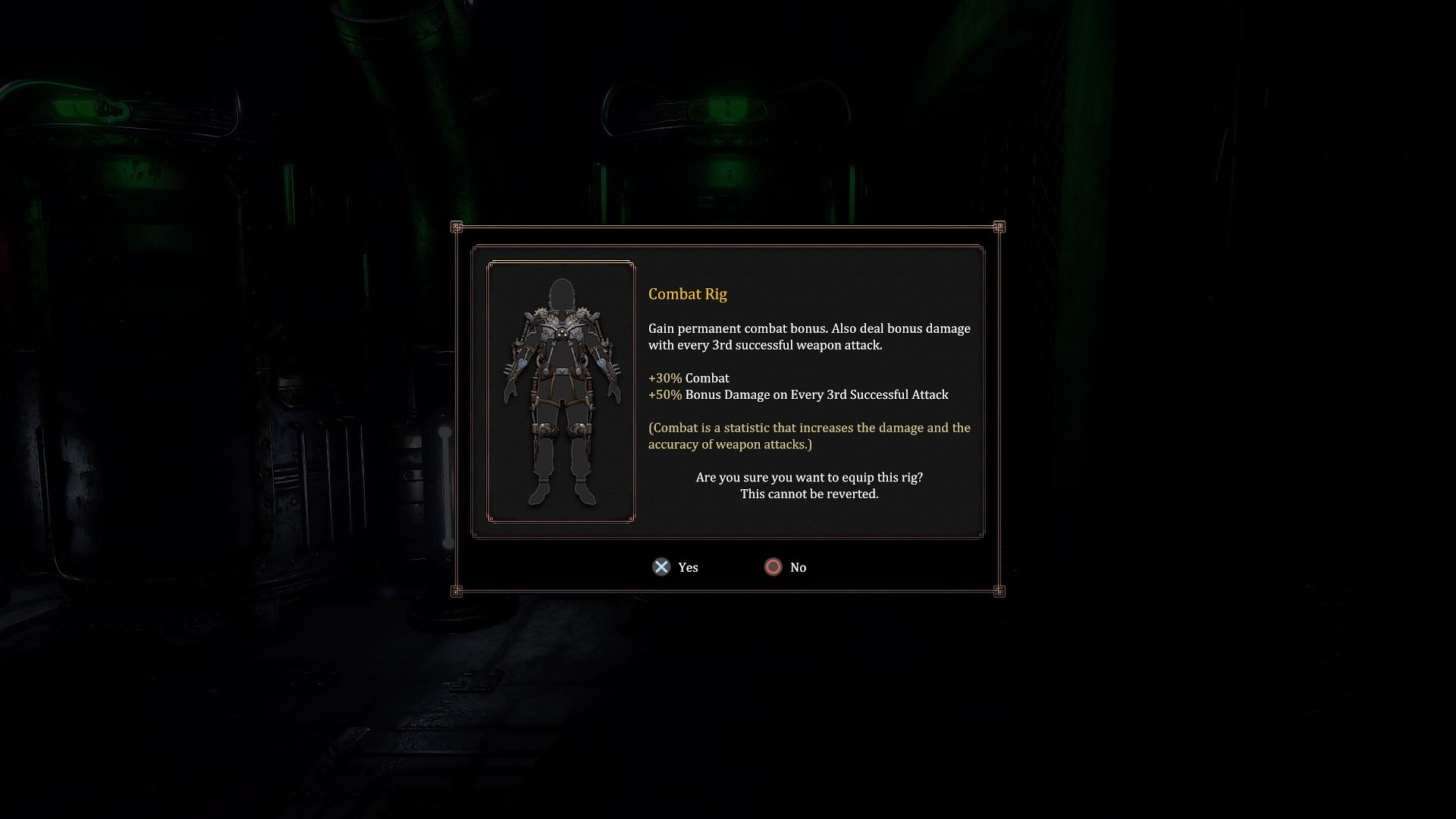 The choices here are fairly standard and straight-forward, the combat rig being the 'DPS rogue' of the group, the heavy rig being the 'tanky warrior,' and the thauma rig focusing on tech and gadget use is the 'mage.'  Being the wildcard of the group and one that doesn't quite fit into conventional class norms, I was immediately attracted to the assault rig.  So as to avoid confusion on the bonuses it grants, I should note that the game refers to experience as "fumium," and HP as "integrity."  All four rigs have the same talent (circuit) trees available to them, so it is certainly possible to make up for your rig's weaknesses, enhance its strengths, or experiment with dual-classing as you progress.

Having played others in the genre, I was fully expecting traps and enemies to overwhelm me with every forward step as I advanced in to the meat of the game.  Vaporum happily obliges in that regard, though perhaps not quite as frequently as I was dreading.  Pulling a lever or using a key to open access to a new area or secret will often summon enemies where you stand, adding some extra difficulty to the conclusion of a puzzle you otherwise would've thought finished.  It's in these moments of combat suddenly being dropped on your head that the time-stop mechanic really shines as the star of the show.  By using clever positioning and paying attention to enemies' attack/movement animations mid-freeze, it is possible, though not easy, to clear most combat encounters without taking any damage.  Early on it almost feels like cheating, but make no mistake, the game is largely designed around use of it, and you're expected to master this mechanic to a high degree in order to complete certain puzzles and avoid certain traps.

Enemies can use elemental attacks that act like the player's gadgets, and enemies are fully resistant to the type of element they discharge.  Additionally, mechanical enemies are slightly weaker to blunt weapons, where organic enemies are weaker to slashing weapons.  I chose not to focus too heavily on one or the other, keeping one of each around and upgrading them as I went.  Instead of investing several points into any weapons branch of the circuits tree, I put them into boosts to gadgets and integrity/energy.  In the late game this also resulted in some massive boosts to weapon damage as percentage of my integrity, the trade-off being I also had to sacrifice that percentage as damage to myself with every hit.  Of course, by this point I also had integrity regeneration up to a certain threshold and a nasty rank 4 vampiric gadget which dealt roughly 400 damage to enemies and healed me for equally as much. 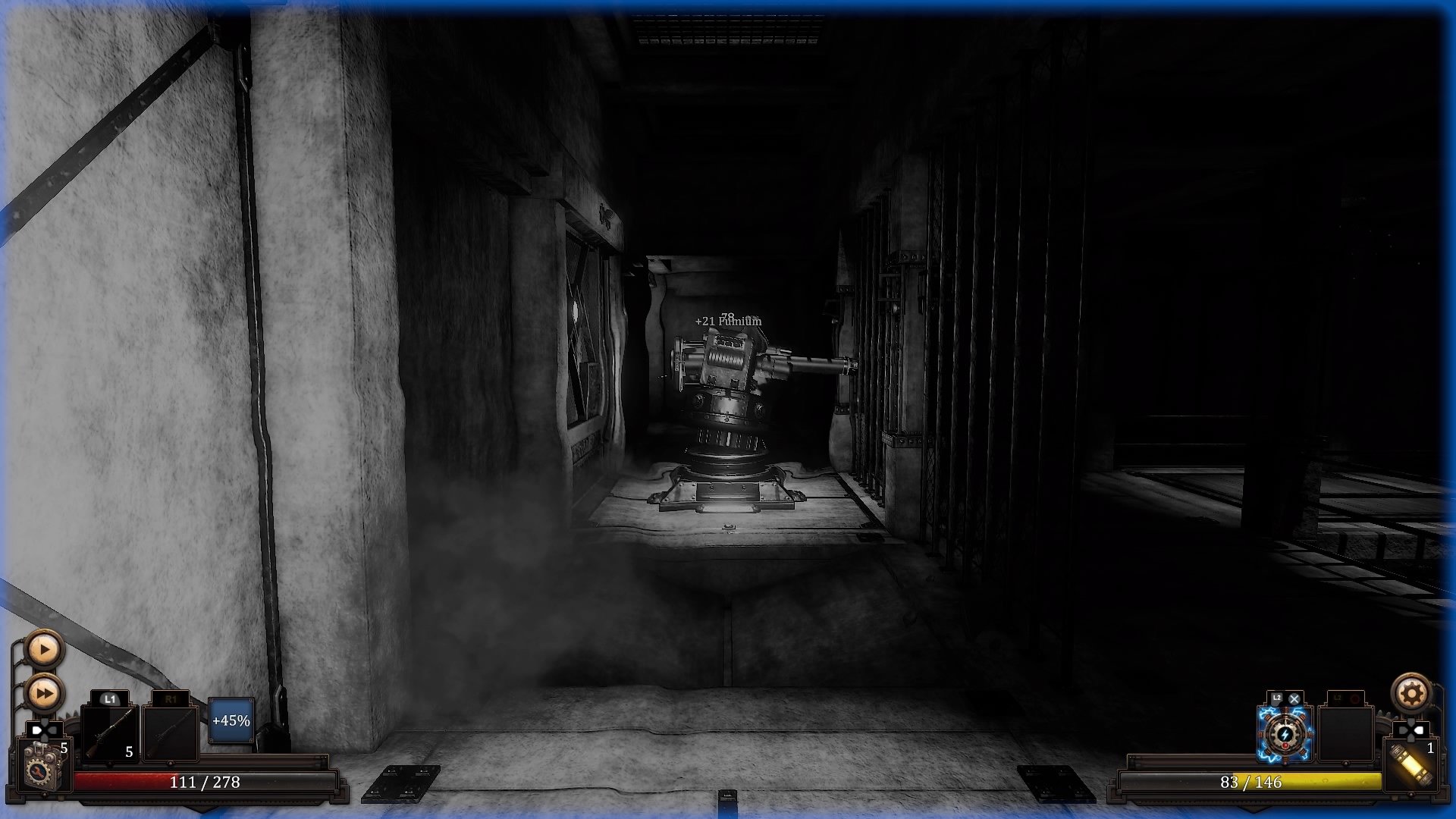 Vaporum's puzzles utilize time-tested concepts such as pressure plates, thrown/dropped items, moving crates, timed trap doors, and teleporters, but they're utilized in clever and often unique ways.  Thankfully I'd place difficulty in solving most closer to Zelda-level than Myst-level, though I can think of a couple instances where the solution was needlessly obscure and I did have to resort to an online guide.  For certain others, it felt as though the game knew what I was thinking and was one step ahead of me at all times, which is always gratifying.

On the elephant in the room: yes, Vaporum quite obviously took a lot of inspiration from the Bioshock series, particularly when it comes to visual design.  To some extent, every floor of the Arx Vaporum has its own individual look and feel, though the overall journey can feel repetitive at times due to the consistent use of bronze and silver throughout the environment.  Elemental effects are bright and pleasing to the eye.  Sound design is strong and it helps a number of areas throughout the game to have an unnerving effect; the voice-over acting is good but not great.  Sadly and strangely, music is missing from most of the game, what little is there amounts to ten-second clips on a loop, used only to set the mood for boss fights and a couple eerie non-combat areas. 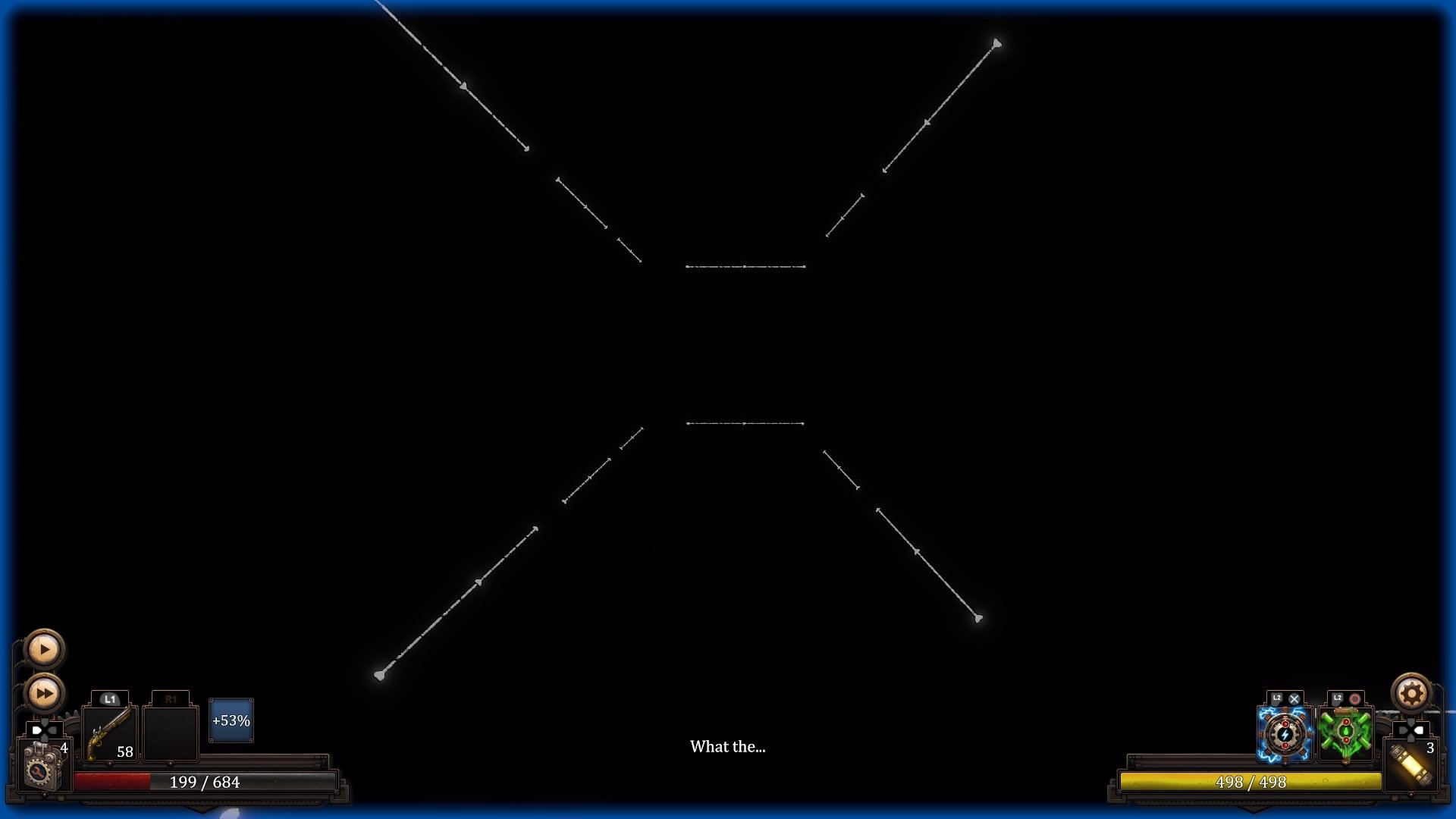 While weapon and enemy variety may not be the best compared to other titles, where Vaporum excels is in its pacing.  The difficulty curve (at least on normal) is a nice steady decline after starting toward the high end.  Weapon and gadget upgrades are found at convenient times.  The story reveals come at a nice pace, and you're bound to find plenty of secrets and Easter eggs to enjoy, including a mandatory reference to Gordon Freeman.  By the end of the game you'll be feeling that your build is godlike, and then odds are the final boss will check your ego, just as it should be.  I'd put estimated play time at 15 hours, with very little content that gets recycled throughout.