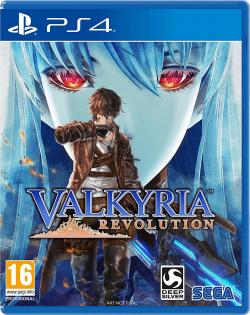 Valkyria Revolution is a spinoff of the critically acclaimed series, Valkyria Chronicles, and is set in a new world having virtually no ties to the events or characters of its predecessors. This review seeks to determine if this entry is worth your time.

Valkyria Revolution is SEGA’s attempt to breathe new life into the Valkyria series.  Valkyria Chronicles had everything that J-RPG fans wanted.  It sported an interesting cast of young soldiers, great stylistic visuals, decent music, and a nice blend between turn-based strategy and real-time action.  Despite the love the first and second game received by fans, it failed to sell to SEGA’s expectations, which resulted in them deciding not to publish the following two sequels to the Western world.  (Check out GBAtemp's review of Valkyria Chronicles Remastered here!)

Much to our surprise, SEGA decided to create a spinoff series called Valkyria Revolution which would release both in Japan and the West!  Sure, it’s a spinoff game but who cares?  Sure, it’s developed by a different team than the first Valkyria but that’s fine.  Yeah, it doesn’t have any of the same game mechanics as its predecessors…  Who cares?  It’s got Valkyria right in the name so it must be a quality game…  Right?

… This is The Phantom Menace all over again isn’t it?

Okay, the game stinks!  Before people head to the comments to insult me, claiming that I didn’t give this game a fair shot, I want to let everyone know that I really tried to like this game.  In fact, it was at the 15 hour mark that I realized that it wasn’t going to get any better.  Still I persevered and stuck with it until the very end, and will continue to play past the ending in order to get that platinum trophy.  But the experience was not a pleasant one.  Let me explain why.

Valkyria Revolution is told to us as a story that took place over 100 years ago.  The storyteller, Richelle, spends what I can only imagine to be many hours of her time explaining to a curious historian that history has painted the “five traitors” in the war for Jutland’s liberation unfairly.

As such, the story is about the five orphans whose village was burnt down 10 years prior to when the story takes place.  During that time each orphan wedged their way into influential roles in the world, simply to start a war for their revenge.  We primarily follow Amleth, the broodiest of the five, who made his way up to a commander of an elite group of soldiers.  We follow Amleth and his 10 subordinates, the Anti-Valkyria squad, during the war between their homeland, the small kingdom of Jutland, and the large country of Ruz.

The circumstances of the war are not very original.  Despite that, if handled properly the plot could have been interesting.  Instead, SEGA decided to take a very barebones concept and try to make it as complicated as possible to understand.  They say that good writers take a complex subject and make it easy to understand, but bad writers take an easy subject and make it as confusing as possible.  If that’s not really a saying then it should be.

However, the real problem with the story is that the characters are very, very talkative in the cinematic scenes that can drag on for several tens of minutes in a row.  The cutscenes aren’t very engaging either and often times don’t do anything to further the story.  Instead, we watch characters standing around and talking for ages.

I’d even be willing to cut them some slack if the characters didn’t look like they were ripped right from a PS2 game.  Seriously, the characters in Final Fantasy 12 (not the remake) look much better than the characters here.  Unlike the stylized pencil-like design of the Valkyria Chronicles games, we’re stuck with boring 3D visuals that show just how little budget was dedicated to this aspect of the game.

Now some might argue that one could easily just skip the cutscenes if they don’t want to watch them and jump right into the gameplay.  I’d argue that if that were to happen then there’d be even less reason to play this slow Dynasty Warriors clone.  Also, even skipping cutscenes won’t let you jump right into the gameplay, as there are long loading times between each cutscene.  Don’t believe me?  As a test, I restarted the game and tried to skip as many cutscenes as possible to get to the actual gameplay.  Below is a video of that test that I recorded on my PS4, in real time.  Granted, I don’t have a SSD in my system, but this is what people can expect.

The combat in the game is boring, easy, and repetitive.  Even during the latter parts of the game, the strategy involved never gets more interesting than “smash buttons and hit big groups of enemies at once when possible.”  The game plays like a very slow Dynasty Warriors game.  You select up to 4 of the 11 characters in your squad and are thrown into a field to fight bunches of weak minions and the ever so slightly more challenging end-level Boss.  There are 4 classes, so just pick 1 of each class to throw in your team and you’re good to go for the rest of the game.  In game, you control 1 of the 4 characters, as the others are controlled by the AI.  As long as you charge into your enemies and let your teammates worry about healing you, you should be fine 99% of the time.  I’m saying this as having played on normal (the hardest) difficulty.  It really is as barebones as it can get.

For any achievement/trophy hunters like me out there, it does take a lot of grinding to get all of those sweet, sweet, digital rewards.  While most of them come naturally from beating the game and none of them are missable, some of them require dedication to get.  The most time-consuming ones for me include spending 300,000 kr (dollars) at the promenade and fully upgrading the weapons of every character.  They’re not overly hard to obtain, they just take time.

As much time as I put into this game, I cannot recommend that kind of torture to anybody else.