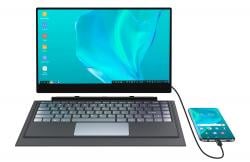 Laptops and I don’t get along very well. Having used various laptops throughout the years, whether it’s macOS, Windows, or even an aging one with Linux installed to make it faster, I’ve always found them to be much better in concept rather than execution. For me, their portability factor never makes the other negatives, such as low-resolution screens or high temperatures ever worth the hassle. Yet, I’m too clumsy to type well on my phone’s keyboard, which is a struggle when my job, socialization, and hobbies all involve lots and lots of typing.

Which is likely why I’ve become so fond of the idea of the “lapdock”. Utilizing the DEX or EMUI technology in Samsung or Huawei devices, these wannabe laptops strip out all the hardware inside a laptop, leaving the screen, battery, and keyboard intact as a shell, powered solely by your phone. By plugging your phone into the lapdock, it becomes a fully functional laptop, complete with a desktop environment, widescreen app layouts, and the ability to run multiple apps at once. Plus, it has the added bonus of having everything you need on your phone; when you need to get stuff done, all you need is the lapdock, and you can get to work, with all your files with you at all times. 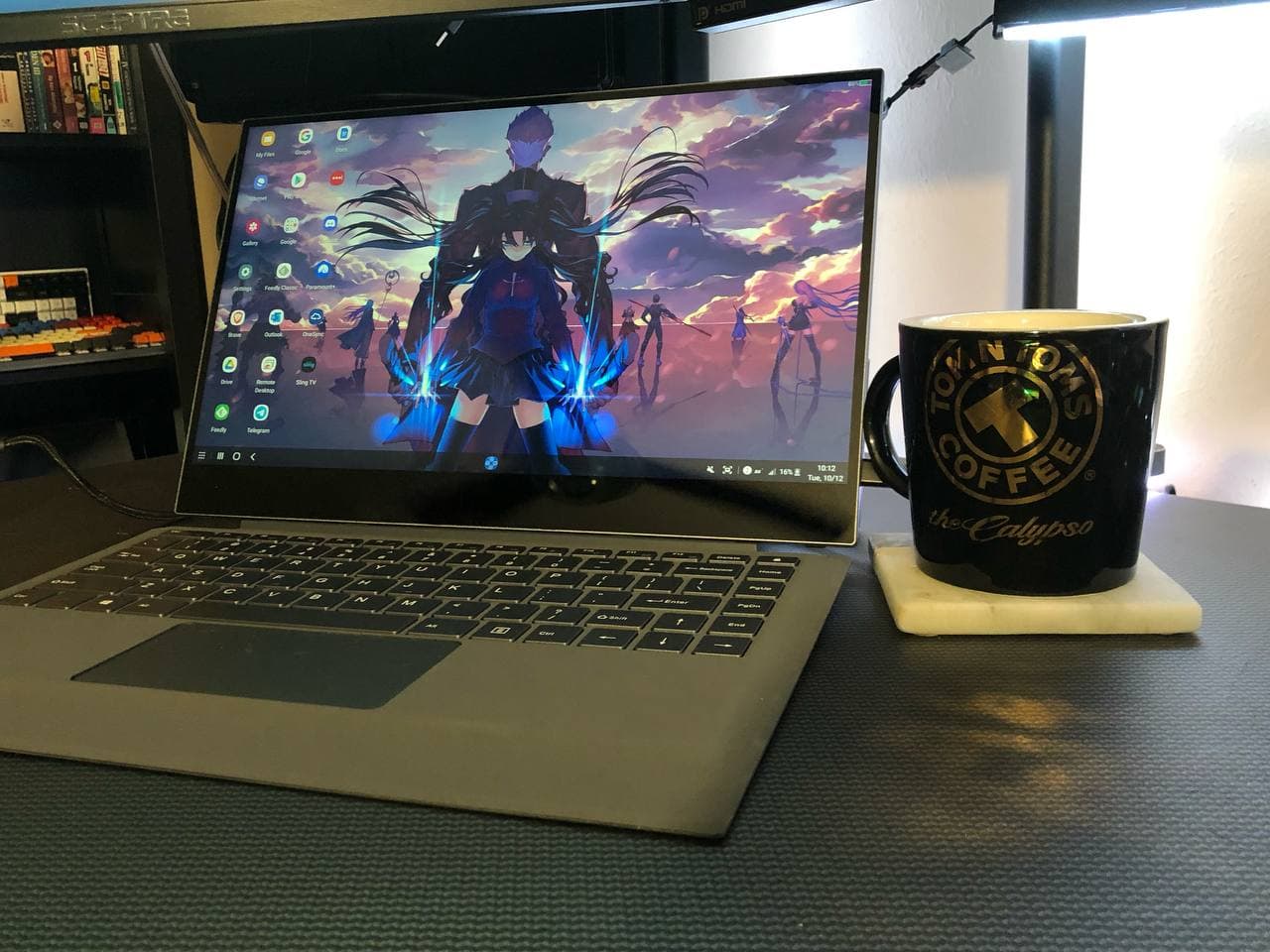 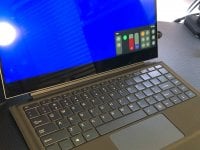 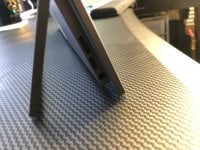 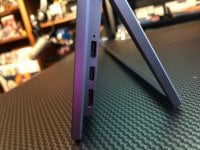 ​
Despite that appeal, lapdocks are surprisingly not as popular as I’d hoped them to be. Very few companies are out there making these kinds of devices, such as the Kickstarter project Leef, or the Nexdock, which has been my go-to. Fortunately, it seems that there are more brands willing to play around with the idea of lapdocks, including UPERFECT. Their X Pro Lapdock promises a lot of features over the competition, with the most notable of which is a large 15.6-inch screen that boasts 4K resolution--impressive when other devices manage around 13” and 1080p, max. It also has a touchscreen, which is an exciting inclusion for a smartphone-based OS. Are these features necessary? There's only one way to find out.

So, upon first glance, the UPERFECT looks a lot like a Microsoft Surface, with its super thin bezels and very slim form factor. It tries to pull off the converting tablet style as well, rather than look like a full-blown laptop. In fact, the lapdock is just a really nice screen that magnetically attaches to a folio keyboard. Honestly, I'm mixed on this decision. On one hand, it's smart to be able to detach the keyboard, in case you want the UPERFECT to act as a portable monitor, without anything in the way. 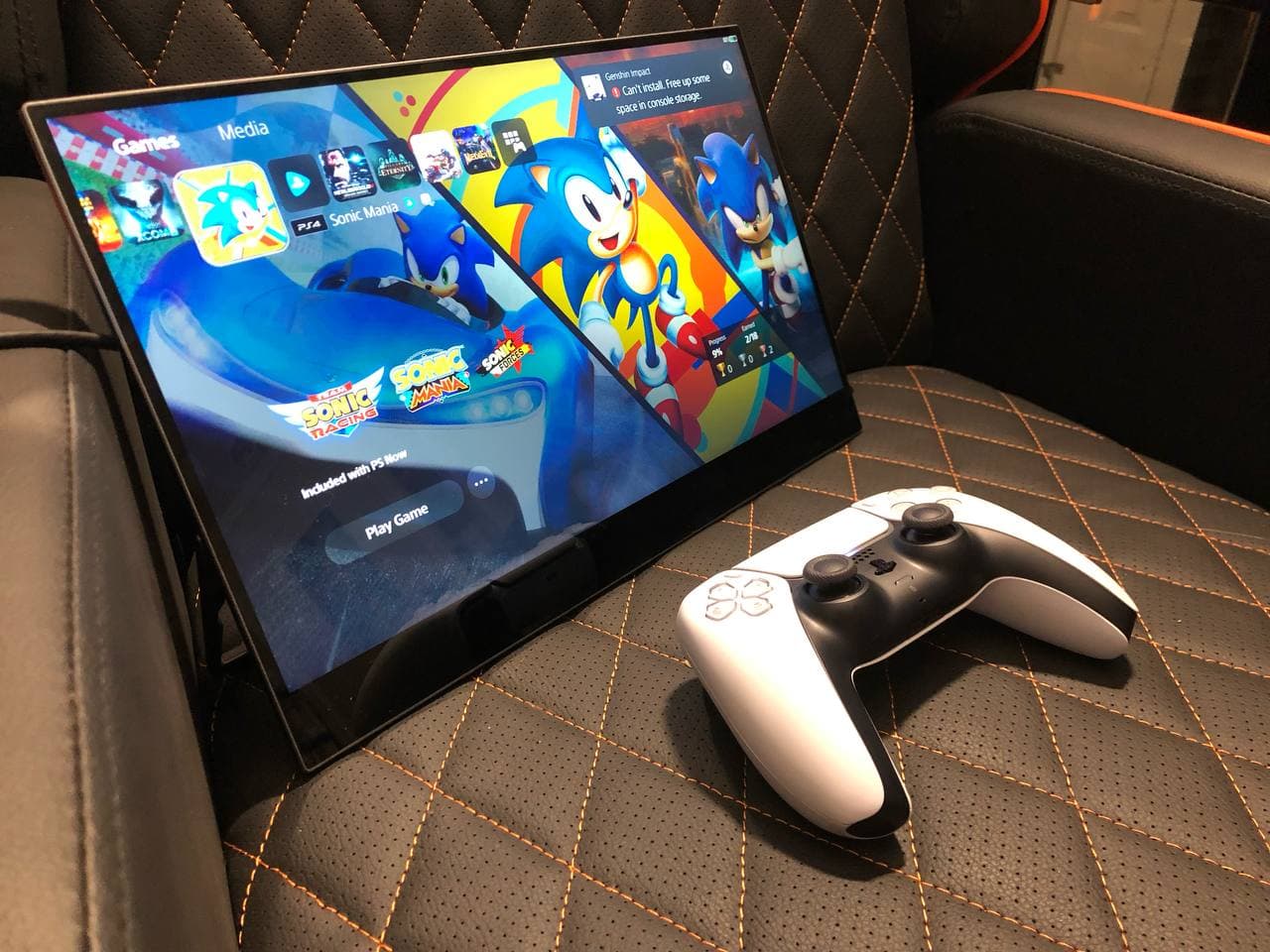 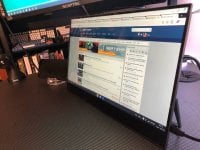 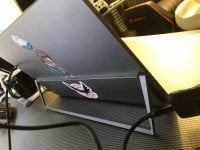 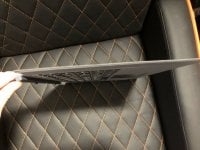 ​
However, it can also be incredibly annoying if you want to use it in your lap, as you would a laptop--since there's no hinge to keep the screen propped up, it instead relies on a small kickstand in the back, which isn't the best for keeping the whole setup balanced, unless it's on a flat surface. The folio keyboard is also a little unsatisfying to type on at times, feeling flimsy. Whether or not you like these choices comes down to how you're going to use the UPERFECT; if you're looking for something you can swap between use as a DEX machine and as a portable screen for say, gaming, it works wonderfully, while those looking for the traditional laptop style to be able to go full power-user with their phone might be left wanting.

Beyond that, as far as features go, the UPERFECT lapdock has just about everything you could want. Hidden underneath the kickstand is a USB-C 3.1 port, used for input, a USB-C PD/TB3 port for charging the device's 10,000mAH battery, yet another USB-C for plugging in an external device, and finally, a Mini HDMI, for anything that won't take USB-C. It also has a touchscreen, which is nothing short of wonderful when it comes to navigation.

The touch input works well for adjusting windows or quickly opening menus, though despite the screen's relatively low lag, it's not the most ideal for writing via stylus. I wouldn't recommend it for any form of dedicated handwritten notetaking, but I suppose it works in a pinch for jotting down small things here and there in an app. Luckily, the typing experience is decent. 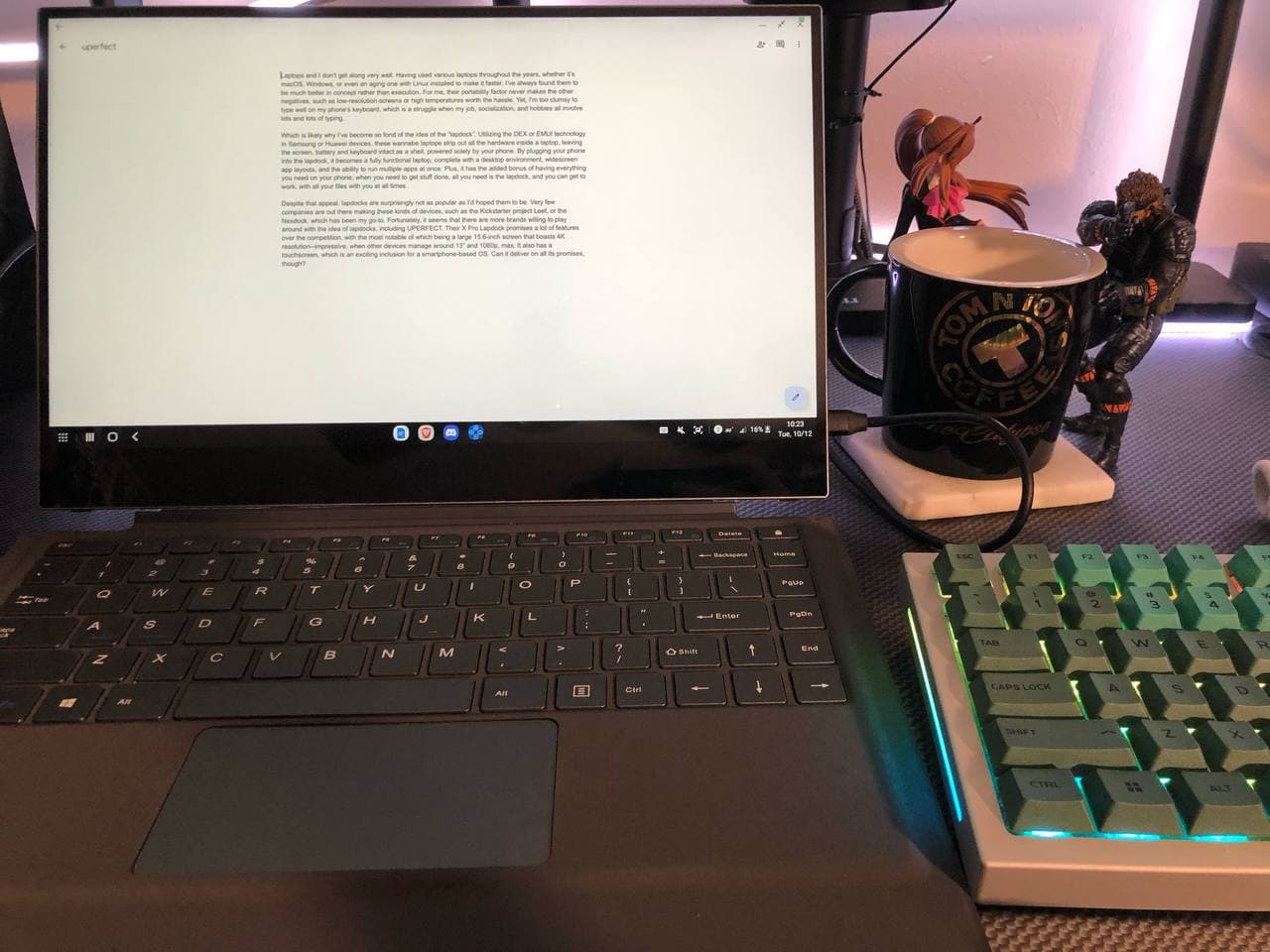 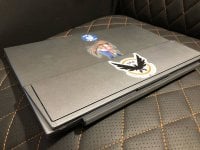 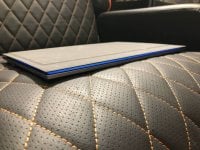 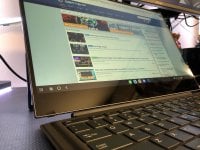 ​
As for the screen itself, it's absolutely lovely. It's an IPS panel, with incredibly bright backlighting, which makes things easy to see if you happen to be outside or in very bright areas. Thanks to the 4K resolution, anything displayed on the screen is super crisp, too, but that comes with a caveat in terms of lapdock usage: Samsung DeX caps at 1440p when used through just USB-C. The only way to make full use out of the 4K screen with DeX is to buy a docking station, but I feel like that goes against the whole want of portability when it comes to a lapdock--why bother, if you have to haul more things around with you? Of course, that issue rests more with Samsung moreso than any lapdocks on the market. When used as a screen for the PlayStation 5, outputting at native 4K and 60Hz, the UPERFECT served wonderfully, with low input lag and no ghosting, so it also makes for a good gaming screen as well.

With all these ports, and seeing as how the lapdock is reliant on your phone, the appeal of this kind of device is in never having to go out and upgrade your laptop ever again. Whenever you get a new phone, you effectively get a newer, more powerful laptop as well, so long as you stick to Samsung or Huawei; while the UPERFECT supports display out on other phones, they don't come with the desktop OS that those two brands do. Again, this one isn't really a fault of the product, but it's something to keep in mind, as you'll only really make the most of it if you plan on sticking to either ecosystem.

Currently, the UPERFECT lapdock retails for $549.99, with the 1080p version weighing in at just a little less than $100 below that price. If you're in the market for just a portable screen, or just looking for something you can settle for on a budget, there are some other options out there. But for those that want an end-all, be-all laptop experience from their phone, with enough features to make it feel future-proof, then the UPERFECT lapdock excels in nearly every way.

While the price may be hard to justify, the UPERFECT lapdock undoubtedly fantastic and well worth the cost for any hardcore DeX or EMUI phone users.
Reactions: HellGhast, the_randomizer, WG481 and 3 others
Share:
Facebook Twitter Reddit Pinterest Tumblr WhatsApp Email Share Link
I need that wallpaper
Reactions: WG481
That's an interesting device, and definitely worth consideration with the current gen of office phones that finally utilize the TV out option again. My own Moto G100 offers the same functionality and it'd be a pretty robust solution if I didn't work from home and already have a much more powerful desktop solution with triple monitors.
With today's phones a Snapdragon 870 or equivalent is easily able to juggle chats, email clients, websites for documentation and youtube on the side to get your regular office or student work done in a timely manner. But as it stands I can use my phone as a cheap emulation station on my 4k TV and get great results with a lot less hassle than hooking up my PC and juggling a fourth monitor at the same time. Only downside is that the TV out option appears to be a frame or two late, making the input lag from the bluetooth stack on android more apparent.


The Catboy said:
I need that wallpaper
Click to expand...

Appears to be from Fate/Stay Night: Unlimited Blade Works, there might be a better version out there, too.
Reactions: Chary and The Catboy
I think that minipcs(like the CHUWI Larkbox) with portable monitors are gonna be the next step on personal computers, that and the Nintendo Switch Trend, wich we can appreciate now with the SteamDeck a device that works by itself and that you can also connect to an external monitor. For now they are too expensive and are not too powerful but that's gonna change on future years, I estimate that in about 5 years we will see these as the two new standards, I don't think laptops will disappear but they will definetly loose market.

Appears to be from Fate/Stay Night: Unlimited Blade Works, there might be a better version out there, too.
Click to expand...

The Catboy said:
I need that wallpaper
Click to expand...

Google is your friend
I always wanted to buy a lapdock too. I got first introduced to it by sentio's superbook back in 2017-2018 but never managed to get my hands on anything like this. Partially because funding tech stuff on kickstarter is .. uh.. yeah. not the best idea.

The only thing thats holding me back from buying one is that i am very limited with it. I am a programmer by profession and need my environments and software to run just like i am used to it on any other machine. and i dont think i will be able to get happy with a lapdock in that sense.