Single player
Local Multiplayer
Online Multiplayer
Co-operative
Underhero is probably a title that escaped your radar when it was released on PC in 2018, or even when it was more recently ported to consoles. The review code was sent in late February since the developers noticed a number of issues and it was deemed best to review the retail version. Well, let’s bring it back into focus and see what this RPG-platformer hybrid offers!

Have you ever thought about where that coin or special item you collect from a minion in a game comes from? Or how minions always get to a place before the hero even shows up? That’s some of the answers to the RPG trope that Underhero answers, because in this title you play as someone from the other camp, the bad one.

Underhero deconstructs the good-guy-saves-princess formula, puts you in charge of an underling who inadvertently becomes the hero of the evil lair for having killed off the very hero coming to save the princess.

Mr. Stitches, our grand villain, tasks you to take the triviality stones back to their owners for the next heroes to collect them after fighting them off. Yes, for baddies, it’s business, as usual to get kicked in the butt by heroes who collect tchotchkes. 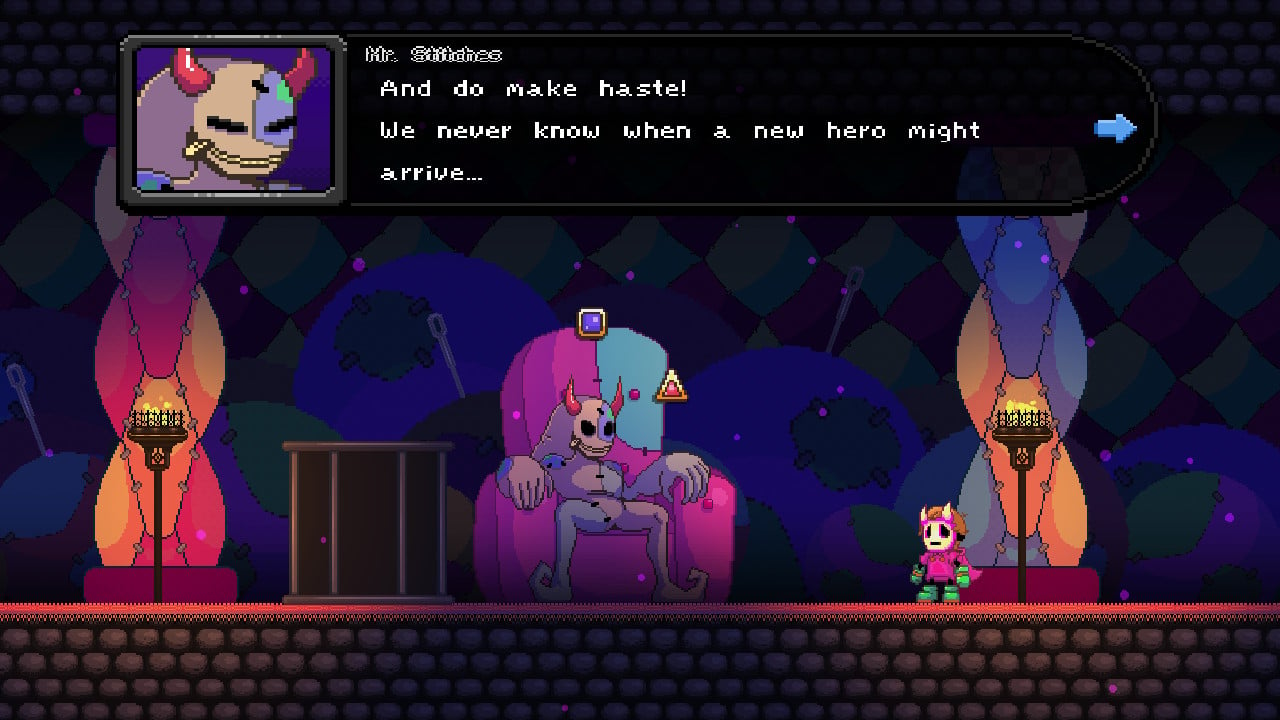 But there's one thing that you didn't tell Mr Stitches: Elizabeth IV. No that's not some Queen's name but a magical hilt that served as the companion of the last hero whose demise you witnessed.

So now our shy protagonist from the evil side secretly joins forces with a magical companion from the good side who will train you before you can challenge Mr. Stitches. Before being ready, our masked kid will have to abide by Mr. Stitches’ quest and deliver those triviality stones to the Moth Queen, Baron of the Long Woods and El Salserissimo. These are the names of bosses inhabiting different worlds that heroes have to go through before facing off Mr. Stitches.

You will meet wacky characters throughout your journey, like a butterfly with a split personality, a rude floating spectral hand or even ghosts who want to party in a graveyard. The title isn’t lacking in terms of plot twists either and it took me by surprise more than once. 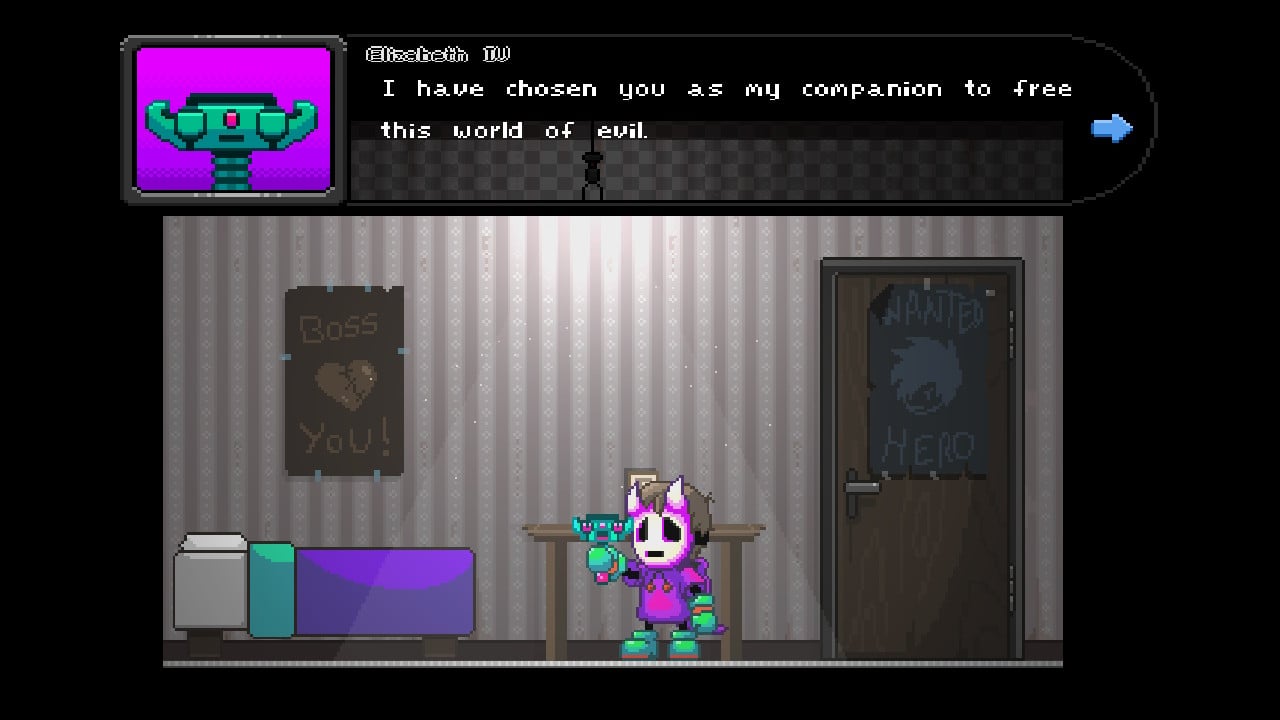 Underhero pokes fun at itself and at the genre it represents in a refreshing way and this is felt within the gameplay itself. As an RPG, you’ll have the opportunity to boost your stats and equipment for battles and gain XP. Battles are conducted in a peculiar, yet interesting way. It all revolves around your stamina bar as every attack will use up some stamina. Jumping and evading attacks will help you regain stamina and if you hit your enemy in tandem with the music, you’ll deal more damage.

If you aren't feeling particularly courageous for a battle, you can even… bribe your foes! Better keep some coins with you! Also, it’s a good idea to talk to your enemies before attacking to learn useful information, because there are mid-mission quizzes (don’t ask) where random questions about the world you are in get thrown at you. Successfully answering them will grant you some nice rewards. Yeah, Underhero is a peculiar title and somehow manages to deliver its peculiarity in a compelling way. 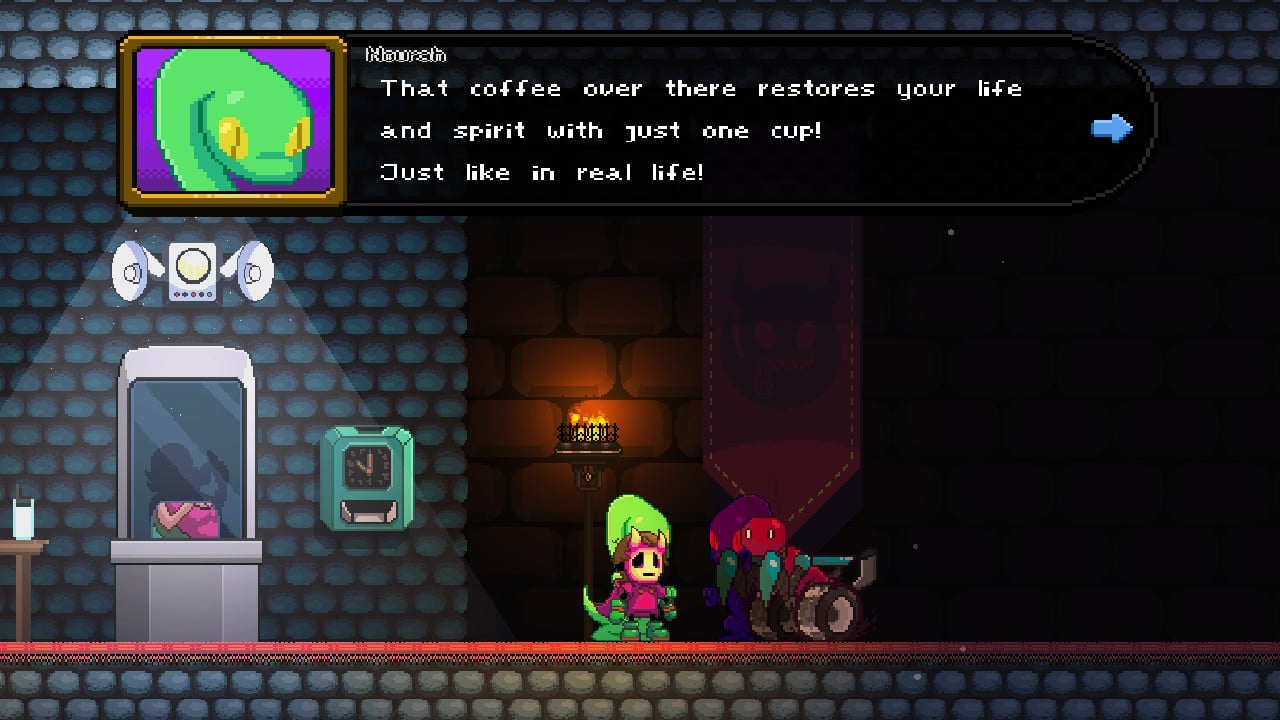 However, the game features many instances where it could heavily improve. Some battles aren't really predictable or follow any easily discernible patterns from the get-go. Several bosses can be hard to figure out at first, and trial and error seems to be the only way to get around them and know their weak spot. These could definitely have been revised.

Despite being an anti-RPG RPG, Underhero somehow still manages to incorporate some of the least exciting parts of RPGs. For one, there are fetch quests. And in Underhero, they’re more often the redundant kind than the fun kind, even if some of them try to add some flavor to it such as finding party supplies for ghosts haunting a mansion.

Levels often feel dragged at times, especially with the platforming sessions - which make a considerable chunk of the game - even if fetch quests are made to sound absurd on purpose. Some mini-games like races and rhythm button-mashing do bring some much-needed diversity but they can't mask the other flagrant issues. There's also the issue of backtracking, a lot of backtracking. On top of this, there's no fast travel feature which makes those mundane backtracks even more so.

Additionally, towards the final segment, the game will have you revisit areas to talk to defeated bosses. And these bosses are found at the very end of the levels, meaning revisiting familiar areas ad nauseum. It all feels like useless filler and the lack of fast travel to basically anywhere makes it even worse...

Another noteworthy issue I've had with the Switch version is the load times. These often take longer than they should, even when transitioning to another room within the same world, and it is not an isolated issue.

Worst for last, near the end of the game, I encountered a significant bug in "Heroes Road, Floor 3-5". It involves a puzzle where you have to collect a key by pushing some switches and just when the key has to hit a platform, a glitch causes it to fall down. I haven't seen any eShop update at the time of writing, even if the developers sent me the code after most issues have been fixed. This glitch, in particular, prevents me, and likely a few other players, from completing the game and I've seen it being reported on the Steam version. Hopefully the devs will work to resolve this on the Switch version as well. 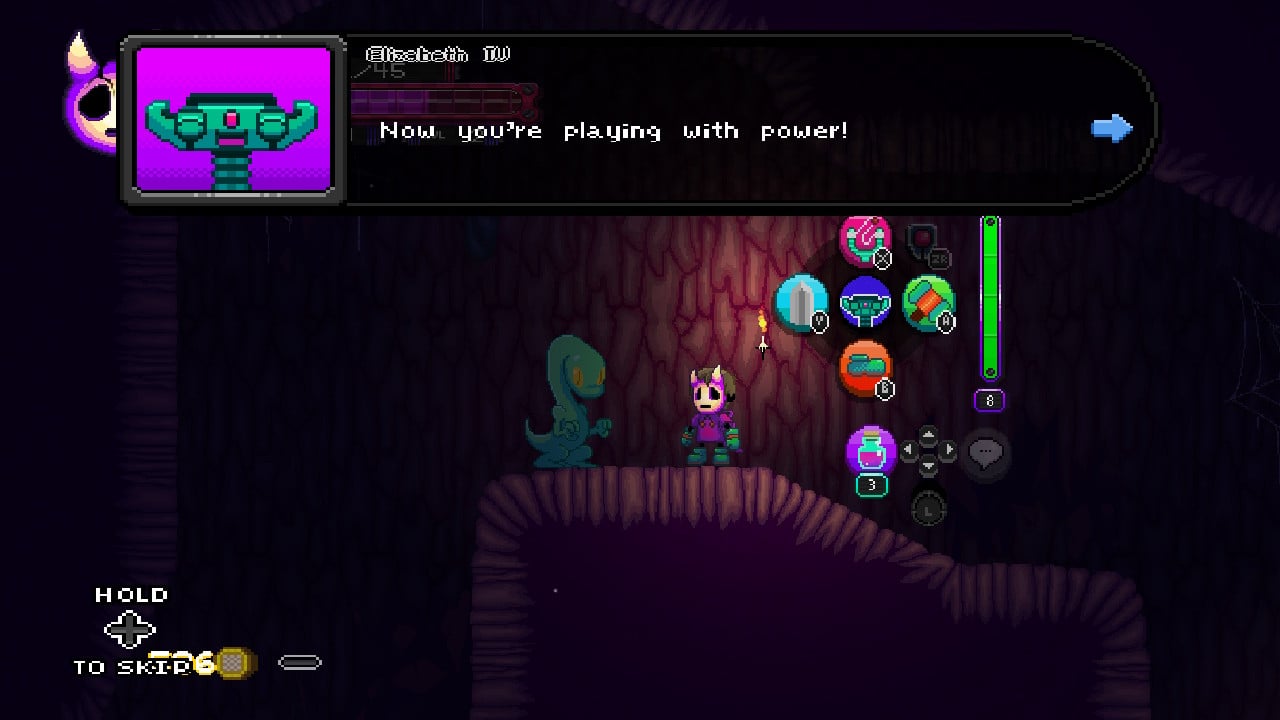 Despite all of its shortcomings, Underhero is a title worth visiting if you’re looking for something that breaks the mold. The retro-styled graphics and original audio score are there to accompany you on a colorful journey with some unique quirks. Hopefully, you won't come across any bugs...

What We Liked ...
What We Didn't Like ...
7
Gameplay
Despite bringing something fresh as an anti-RPG title, Underhero’s gameplay often feels uselessly repetitive.
8
Presentation
Underhero’s graphics and original music are some of the most appealing features of the title which compliment its original premise.
7
Lasting Appeal
Most of the game’s downsides arise from the backtracking and dragged levels, which make these features feel like integral parts of the gameplay, inhibiting players from really getting glued to the game.
7
out of 10

If you’re looking for a refreshing title, Underhero will deliver on this font with its original premise of an RPG-platformer hybrid, but some of its gameplay elements could have been improved upon.
Reactions: Kazalber, HylianBran and RyRyIV
Share:
Facebook Twitter Reddit Pinterest Tumblr WhatsApp Email Share Link
wait you weren't able to finish it cause of a bug and gameplay / level design wasn't good but you gave it a 7? very generous imo

J-Machine said:
wait you weren't able to finish it cause of a bug and gameplay / level design wasn't good but you gave it a 7? very generous imo
Click to expand...

I've been in touch with the devs and the bug is a random one, and not everyone experiences it. it's also quite an original title and deserves some credit for that, especially considering the size of the dev team (5 or so).
Reactions: RyRyIV and OrGoN3
i just got it

@ DEMONGreninjaPG: what? 2 minutes ago
Chat 4