Bluetooth is virtually a basic human need these days, so the ability to add wireless audio to devices that don't natively support it is very appealing. Is the iDevice-oriented AirFly Pro any good and how will it perform with non-Apple devices?

It's the silent connector of devices, the magic that lets you share locally, from your phone to your stereo, your refrigerator to your car; Bluetooth is quite literally everywhere and it isn't going anywhere soon. Twelve South is run by a husband-and-wife team that was founded in 2009, and currently, they have a team of around 20 creatives who are based in Charleston, South Carolina with their products being distributed in over 100 countries. They are committed to designing products as innovative as Apple itself. They have been designing beautiful accessories exclusively for Apple products for eleven years, and have been dedicated to serving the legions of people who, like them, line up in front of an Apple store to buy the latest and greatest Apple products. Twelve South pride themselves on paying attention to the little nuances and sincerely want to be your go-to source for gear made exclusively for Apple. 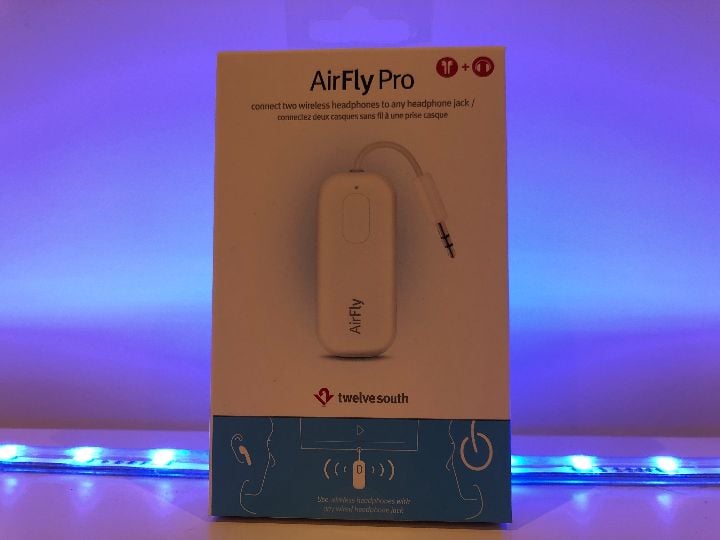 Upon receipt of the AirFly Pro I opened it up thinking this was going to be just another unsightly dongle to have to tolerate hanging from my devices. However, much to my delight, this one is sleek and small enough to take with you everywhere. The packaging gives it a lot of room to breathe, and if I'm honest, they could definitely reduce the packaging down by a factor of probably 50% and still have room to retain enough protective bubble around it. The device itself is a svelte 1cm x 3.2cm x 4.4cm, comes complete with a little travel pouch to keep it clean, a USB-C charging cable, and a handy little cap for the 3.5mm jack which transforms it into a keyring. Weighing just 18.1 grams, the AirFly Pro is a delight to carry around, keeping on your keyring, in your pockets or slipped into your bag or backpack. You have a range of possibilities with this device thanks to the versatility of its 3.5mm jack and its incredibly useful two-way design which allows you to plug into virtually every device known to man, to either send or receive audio. This includes but is not limited to: televisions, stereos, speakers, portable media players, car stereos, and even aeroplane’s entertainment units. My mind is working overtime to find uses for this!

Setting up the device is super simple whichever way you use it. For transmitter mode (TX) slide the switch to TX, then hold the power button on the front for several seconds until it’s on, then continue to hold until it's in pairing mode. Now put your Bluetooth headset into pairing mode and there you have it, you are paired and ready to go. If you want to pair a second headset, you simply double-tap the power button and pair a second device to it. Setting the AirFly Pro to receiver mode (RX) is a similar affair, you simply slide the switch to RX, hold power to turn on, continue holding to get it into pair mode, then pair your phone to the dongle; done.

In testing, I decided to pair two of my BT 4.0 headsets to the dongle to set it up for use. Setup took less than 30 seconds and I was ready to plug it into my devices. I decided to first test it on the Nintendo Switch as I have previously reviewed the HomeSpot BT audio transmitter, though this time around I was plugging the dongle into the top of the console to get audio out via the 3.5mm headphone jack. The device worked admirably providing slick audio to both my headsets in unison, with no notable lag or interference. The biggest issue was actually positioning it on the Switch to dangle down behind my console in handheld mode. While it worked, and it worked really well, it really isn't made for portable devices, so for something like a Vita, Switch, 3DS, etc., it's simply too cumbersome and intrusive to their respective form factors, throwing off their equilibrium and making them a little unkempt. 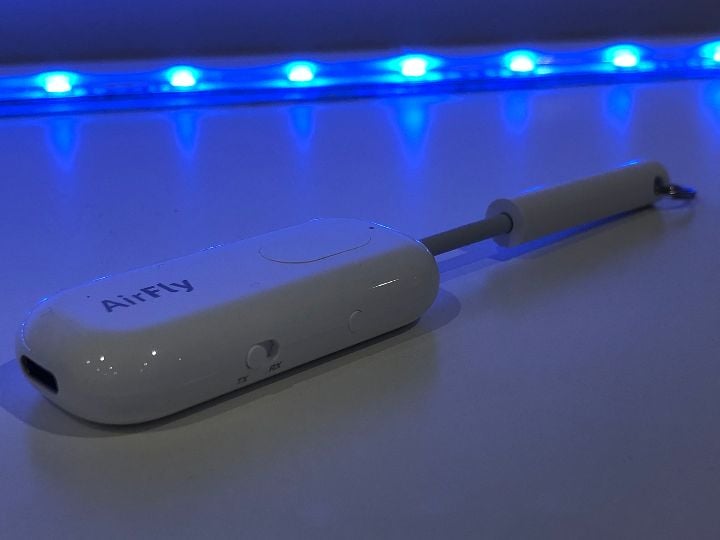 Inserting this dongle into my bedroom TV's rear headphone socket, my wife and I could happily listen to the TV with zero ambient noise. I configured the audio out of the TV ensuring, for safety, that the audio limiter was in place to protect my eardrums. I then proceeded to deafen myself temporarily by accidentally toggling line-out; my word, it was so freaking loud. Once correctly set up and volume level established, you couldn't see the device at all from the front of my TV in a usual viewing position, and thanks to a handily placed USB socket on the TV I could technically leave it in there for the foreseeable future and just swap audio sources from headphones to TV speakers via the TV's software. I tested this to verify that charging while transmitting worked and it indeed does. In real life usage terms, it also means that my wife can now listen to her TV programs while I played on the Switch in peace and quiet or vice versa. And no, that's not a euphemism. Using this in our car creates a whole new ballgame as we just have a CD player with radio and aux in, and it is very rare we connect anything to that stereo as we typically don't carry cables around with us, or at least, remember to keep them in the glove box. The ability to add Bluetooth connectivity to an ancient car system is incredibly useful to me, and I'm completely enamoured with its simplicity. Back in the day, I remember there used to be tape to 3.5mm aberrations that appeared to convert your digital audio player's music back to magnetic media. It was chaotic voodoo and awkward as hell with all those cables and moving parts. Thanks to the AirFly Pro I can just plug it in and I'm "toothed up" as the cool kids say. I took the opportunity to stream with Spotify back and forth to work for the last 2 weeks with fresh beats coming in my ears every single journey. With its 16hr battery life on a simple two-hour charge, it saw me well through the 20 journeys I made, and should technically last a total of 48 20-minute journeys before needing another juice-up. Again with the supplied USB-C cable, you could technically charge and RX at the same time, but it would probably lessen the battery life in opting for that more permanent solution.

For my laptop, I decided to neglect my trusty built-in Bluetooth and opt to convert the headphone socket to Bluetooth via the AirFly. I told my laptop to forget the headset as a stored device, collected it to the AirFly and went for it. The results, however, were mixed, partially due to my laptop playing up and partially due to the AirFly seemingly not being able to be used as a headset as such. I tried a simple test to record sound via Windows 10's built-in voice recorder, as I have done for countless other headset reviews, but sadly I could not get vocal audio recorded through my BT headset connected to the AirFly in the headset socket. This was also verified by plugging it into my Xbox and PS4 controllers and I could not use my connected headset with the AirFly for chat, but I could hear in-game sounds just fine. Being that it was only at this stage that I had realised you couldn't use it for speaking I consulted the provided manual, and though it doesn't seem to allow use of the microphone, it does state that it can be used for gaming, which would suggest there may be a way to do it, but I couldn't figure it out. Windows didn't recognise my headset connected to it as headphone and a microphone combination as it usually does directly via Bluetooth - it just captured static when forced to - so gaming on any console, mobile or PC might be hampered by the fact that voice chat doesn’t appear to be supported.

Overall this product is a solid little device that does what it says it will and excels at it. Built with Apple products in mind, this can be used on a multitude of devices and with a plethora of headsets without skipping a beat. At $54.99 it feels a little steep, but you really do get what you pay for due to its twin purpose, dual listener allowance and slinky form factor. This device is unashamedly targeting music lovers, players, listeners and sharers, and it hits that spot exquisitely for this segment of that market. If it had supported chat too then this device would easily have beaten all expectations and exceeded my imagination, and perhaps it's down to me doing something wrong, but it doesn't appear to be any use for gamers unless they're content not to chat with their buddies, and just listen to some banging beats. 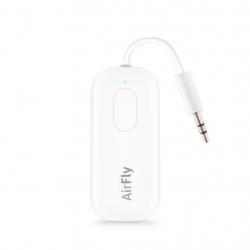