As a lifelong drum and bass head: I appreciate good audio equipment!
In a world saturated with Bluetooth devices, how does the Tribit Maxboom stand out from the portable speaker crowd? Let's take a look!

Tribit is an enigma of a company. They represent a brand and exude a lifestyle, which is as appealing as it is vague. Tribit rather masterfully distributes high-quality wireless audio globally and explain themselves as having been, "Founded by a collective of sound engineers and design maestros, Tribit is a Bluetooth Audio and Headphones brand that hits the highs on both smashing sound quality and stunning looks." The Maxboom doesn't feature on their site though, not by the name Maxboom anyway, which makes me wonder why it isn't there. I also couldn't find any info on the company's whereabouts or beginnings, which leads me to think that they're either relatively new to the game, or very very secretive. 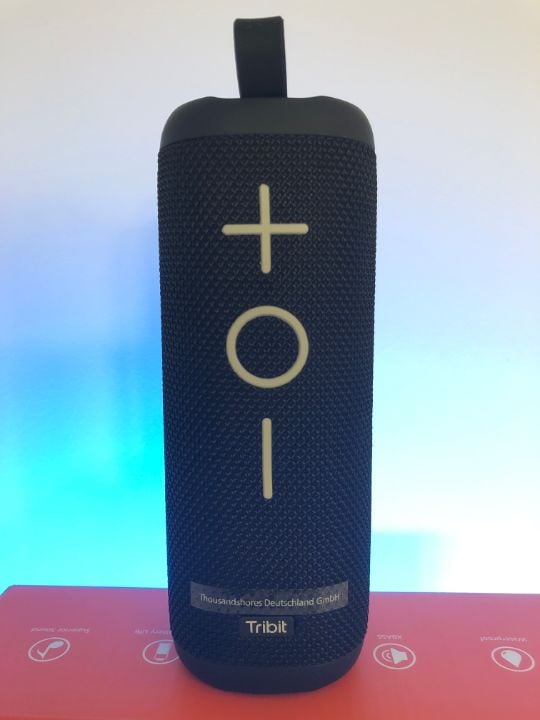 The unit comes boxed modestly in a vibrant orange cardboard box, and upon unboxing you are greeted with a simple ~45cm micro USB cable, a tiny user manual, and some accompanying business cards highlighting their efforts with UNICEF and thanking us for our purchases. The packaging is sparse with information, just naming a few key features and providing some QR codes and web addresses to get in contact with them if anything isn't up to scratch.

Currently retailing on Amazon for $69.99, I wanted to find out what this speaker really has going on under the hood that separates it from the crowd. I would be using my Apple iPhone 8 plus as my main device for connection and testing, as I usually use this day-to-day for my headphones/Bluetooth headsets and wireless speakers.

Aesthetically this speaker is a thing of sheer beauty. With it's simplistic and sleek matte black plastic curves and high gloss reflective inlays on its dual passive radiators, the Maxboom delivers in terms of understated style that fits into your world effortlessly. Whether it be in the car, in the pool, connected to a projector for movies, or simply connected to your phone for music; it delivers. A velvet touch rubber handle finishes the unit with its chrome effect screw adding a layer of quality and a pristine finish to the unit that makes it all the more worth the price tag. The front of the unit has a very iconic looking "+", "-" and "O" series of white raised plastic buttons for volume and "MFB", which I would later realise would mean the unit has a microphone built in, so I could effectively use the speaker to ask Siri whatever I wanted while connected to my iPhone. To the rear of the unit, you have a minimal and stylish selection of 3 buttons (power, Bluetooth and XBASS), a row of LED's for displaying the power level, and a rubber tab that keeps the AUX and USB socket watertight. Apart from that, there is just a pure "360-degree" speaker wrapping the unit into a sturdy and attractive bundle. I really like the build quality and feel of the Maxboom; It's very nice indeed.

Powering the device up the row of four white LED's come to life and gives you rough estimations as to battery percentage. one light for approximately every 25% of charge left in the device. With a 20-hour battery life at medium volume, I didn't expect to have to charge the unit at all during the next few days: and I was pleasantly impressed with its ability to just keep going. This was a good thing too as the waterproofing of the rubber tab that protects the AUX and USB sockets was tremendously hard to open. To the rear you also notice the back-lit XBass button, and this is for emphasising a reasonable level of bass in your songs. While it's no independent subwoofer, it does a decent job of adding a definite layer of richness to your tracks that would otherwise be lacking and outright tinny. Connecting to the device couldn't be simpler, with a click of the BT button and a scan of your phone it's done. One feature I read in the manual is that you can wirelessly daisy-chain two Maxbooms together for really blasting out the tracks, and though I don't have two to test with I could see that being a great thing to do if someone else you know owned one. I couldn't see me needing two of these in my life as a permanent fixture, as I simply wouldnt use them together, and the cost involved then becomes $140, which is unneccesary. One is more than enough for my needs. One is perfect. 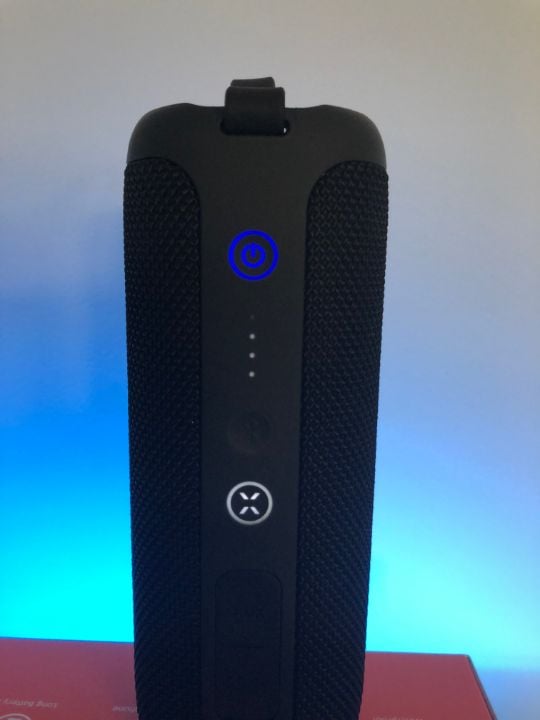 Having treated my kittens to an audible bombardment of Drum & Bass from artists such as Noisia, The Upbeats, Prodigy and other random miscellaneous tracks from some really obscure producers on my iPhone, and honestly really enjoying the quality sound it was delivering to our ear-drums; I thought I would really put this device through its paces with a series of frequency tests. On the whole, it handled them all surprisingly well. 20Khz-20Hz ranges tested superbly, with high frequencies (20khz-6hz), high to mid frequencies (6khz-2khz), mid-range (2khz-250Hz), bass range (250hz-60Hz), and sub-bass range of 60-20Hz working astonishingly well. (it struggled under 45Hz and over 13500Hz, though to be fair it is rated 70-20Khz frequency response in the manual). Laying the device with the power button on its back gave this device the best sound I could find. Standing it upright is a close second but it seemed to lose a little of its room-filling-ability with one of the ends almost covered. Standing the unit up on end isn't terrible though, it does have a ridged design to allow sound to escape, it just deadened it a little when testing on my glass table. Overall I found that the Tribit Maxboom provided consistent and distortion free sound quality, even at high volumes.

One minor issue I had with this device was that the volume it thought it was didn't match what was displayed on my iPhone. For example, if I set my iPhone volume to 50% and clicked the phone's volume up and down buttons the volume would increase and decrease as expected. However, if I set my phone's volume to 50% and used the "+" or "-" buttons on the Maxboom I would get a staggering jump in volume. Perhaps this is an "IOS" issue rather than anything else, but I found it annoying that I could turn my volume down to 2 bars on iPhone, then click the "+" button once on the Tribit and it would jump to 50% displayed on the iPhone. It just didn't match up correctly, but with a couple of fiddles, it's easy to quickly adjust the volume to a suitable level.

Comparatively, I have owned my fair share of unbranded Bluetooth speakers and I can confidently say that the Tribit Maxboom blows virtually all of them all out of the water. JBL, BOSE, and UE may have fancy NFC and have a higher price tag, but they don't deliver the same battery life and operating ranges as this does. Finally: if I can offer any advice for testing these devices to see how well they perform with your favourite music, I would plead with you, for sanity's sake, to please listen to paid-for, crisp >=320kbps HD audio, and never bit-crushed youtube rips or dirty grimy "mixcut" mp3's or similar things of that ilk. The only way to really select a good quality wireless speaker is to take your time, and listen to your favorite tracks that you know and love and ensure you can hear every nuance you recognise within that track in the same way you would hear it through headphones or dare I say it; on a bigger hi-fi set up.