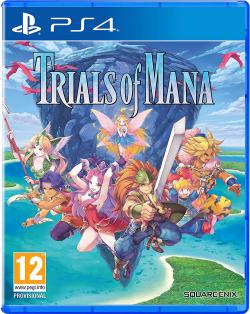 The Mana trilogy is something I’ve always wanted to get lost in. With Secret of Mana touted as a timeless classic, both its predecessor and sequel would surely share this title. I went into Trials of Mana with little knowledge of the series prior, and I did so with a great sense of anticipation to what I hoped to be a RPG reminiscent of that golden era; I didn’t quite get what I wanted.

Trials of Mana starts out strong. Allowing you to choose your party is something I’ve appreciated since playing the original Final Fantasy. It gives your adventure an incredibly personal touch, and can transform an otherwise-linear experience into something special and unique. Here, you get a choice of your main character, as well as two allies to accompany you on your journey. This decision does little to alter the main story, but provides you with differing dialogue as the story progresses, as well as a few different endings dependant on your protagonist. 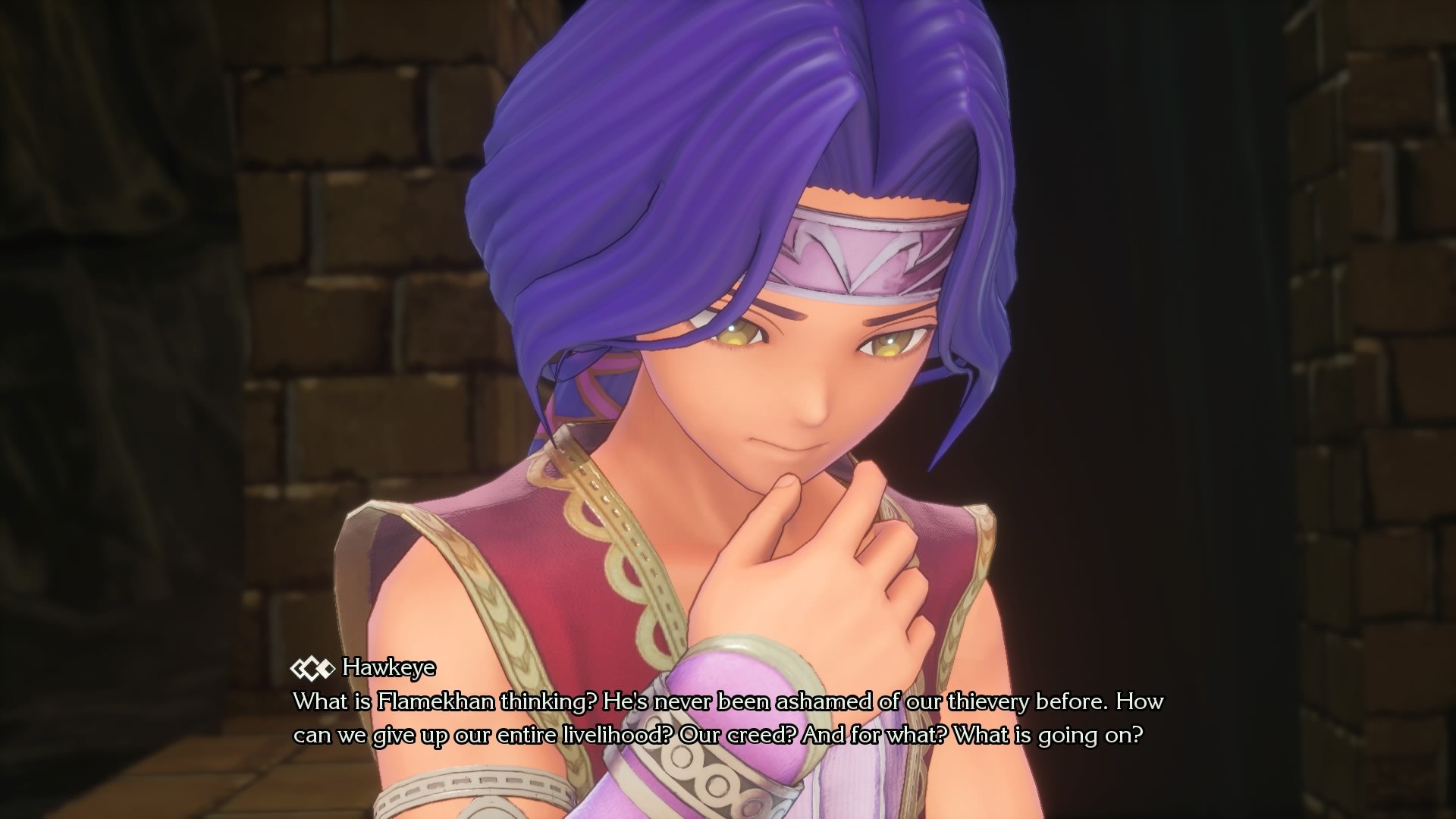 Before jumping into the bulk of the story, you have a motivation-establishing prologue chapter for your chosen protagonist. A fan of thieves, I went with Hawkeye. He’s a part of the noble Nevarl Thieves, and until recently, was having a great time of it. Everything changed when their leader Flamekhan declares himself a king with no kingdom, and sets out plans to invade the neighbouring country of Laurent. As Hawkeye confronts him about this, alongside his childhood friend and son of Flamekhan, Eagle, it’s revealed Flamekhan is being controlled by the evil Isabella. Controlling Eagle, Isabella forces the two of them to face off, this battle actually acting as a tutorial. In the end, Isabella kills Eagle, with Hawkeye taking the blame. Isabella then goes onto place a cursed artefact on Flamekhan’s daughter, and Hawkeye’s love interest, Jessica. Intent on saving his friends and freeing Jessica of her curse, Hawkeye sets out to meet the Priest of Light for help. 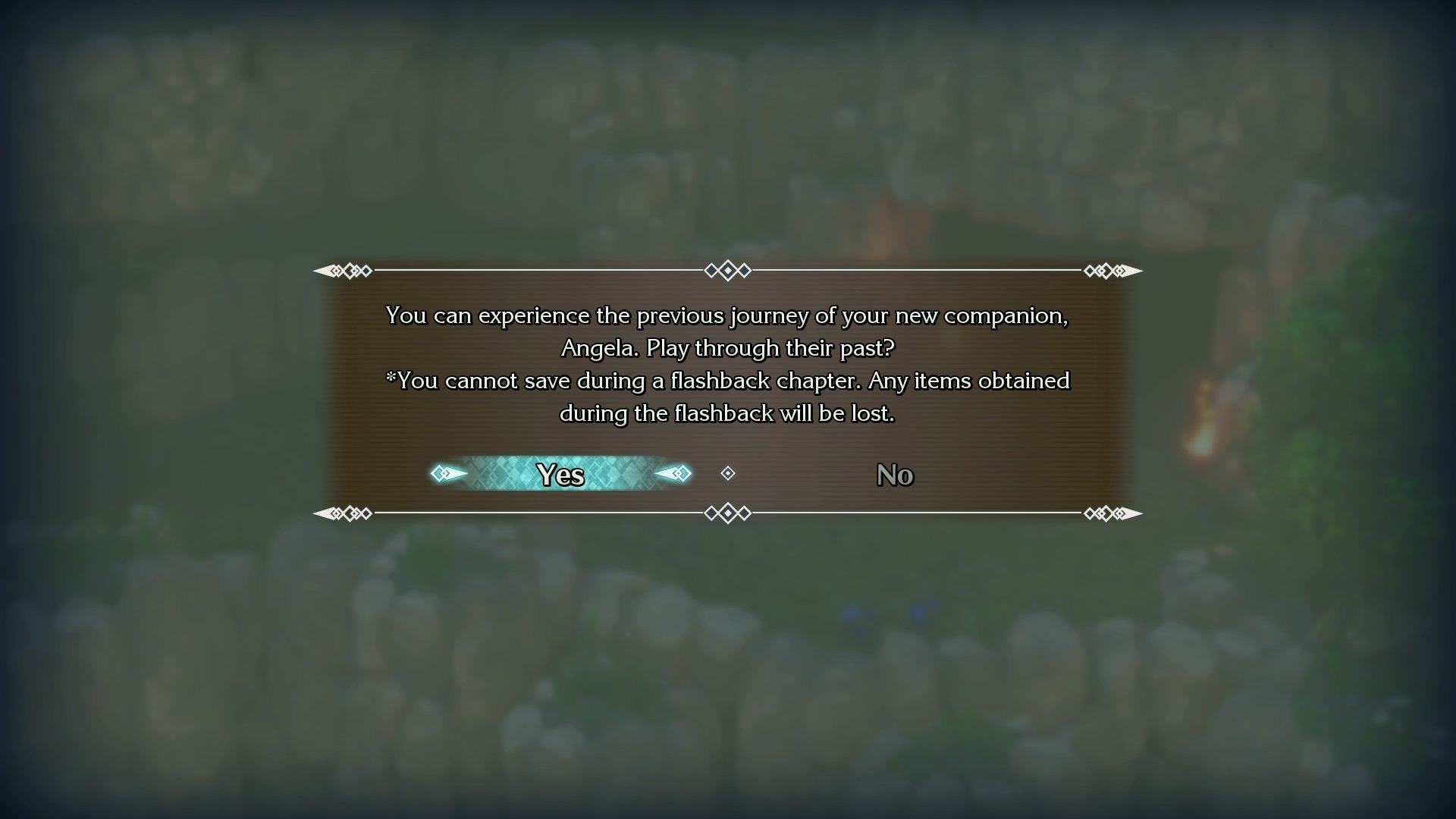 Usually I wouldn’t feel it necessary to go into such detail on explaining aspects of the plot, but this prologue stood out to me. It didn’t necessarily last long, but it did a fantastic job of establishing characters and motivations before seeing you on your way to get stuck into the game. As you meet your allies down the line, you’re given the choice to play their prologue chapters too, and I can say that each of the three I played were delightfully crafted. They set the game off on such a high note, it makes what is to follow such a disappointment by comparison.

From here, I can only say the writing got lazier and lazier. The game relies too much on unexplained detours and convenient events to both pad out the story and keep it progressing. The Minor Mallet was a notable case of this. To enter the city of Laurent, you first need the assistance of a sage. To meet with the sage, you must shrink yourselves, and to shrink yourselves, you must track down an incredibly rare item–one that eludes even the merchants of the famous Night Market. That is, until a random NPC appears with it for sale, who handily gives it you for free with no real reason nor rhyme. It’s bizarre. To put in these detours to the plot, you expect some kind of challenge, some kind of detail, or payoff for your time. Instead, you find yourself left with a kind of meaningless backtracking that serves only to burn players out before reaching the events that truly invest you in the world. The story does have its interesting moments, but the journey to them is excruciating.

This really is the extent of the dialogue.

Of its strong points, I find myself time and time again coming back to the world itself and the established lore. They’re both brilliantly interesting, but it only goes to shine a light on what Trials of Mana is by contrast–an extra. Having not played Secret of Mana myself, I struggle to say whether the series as a whole is simply unsuited to my taste, or whether its final entry is a lazy addendum to milk fans dry in a time before post-release DLC, but it’s difficult to recommend all the same.

Of the other major aspects of the game, combat is something I find myself incredibly conflicted on. Featuring what feels to be fairly traditional action RPG gameplay, combat as a whole is a polished and satisfying experience. Movement is fluid and attacks are clearly and fairly choreographed to allow you time to react. Skills can be used either by consuming MP, or by charging a meter after stringing together power attacks on an enemy. At its core, there’s a lot to enjoy. What I found, however, is that it becomes tiresome–not by fault of the system in itself, but by my AI companions. 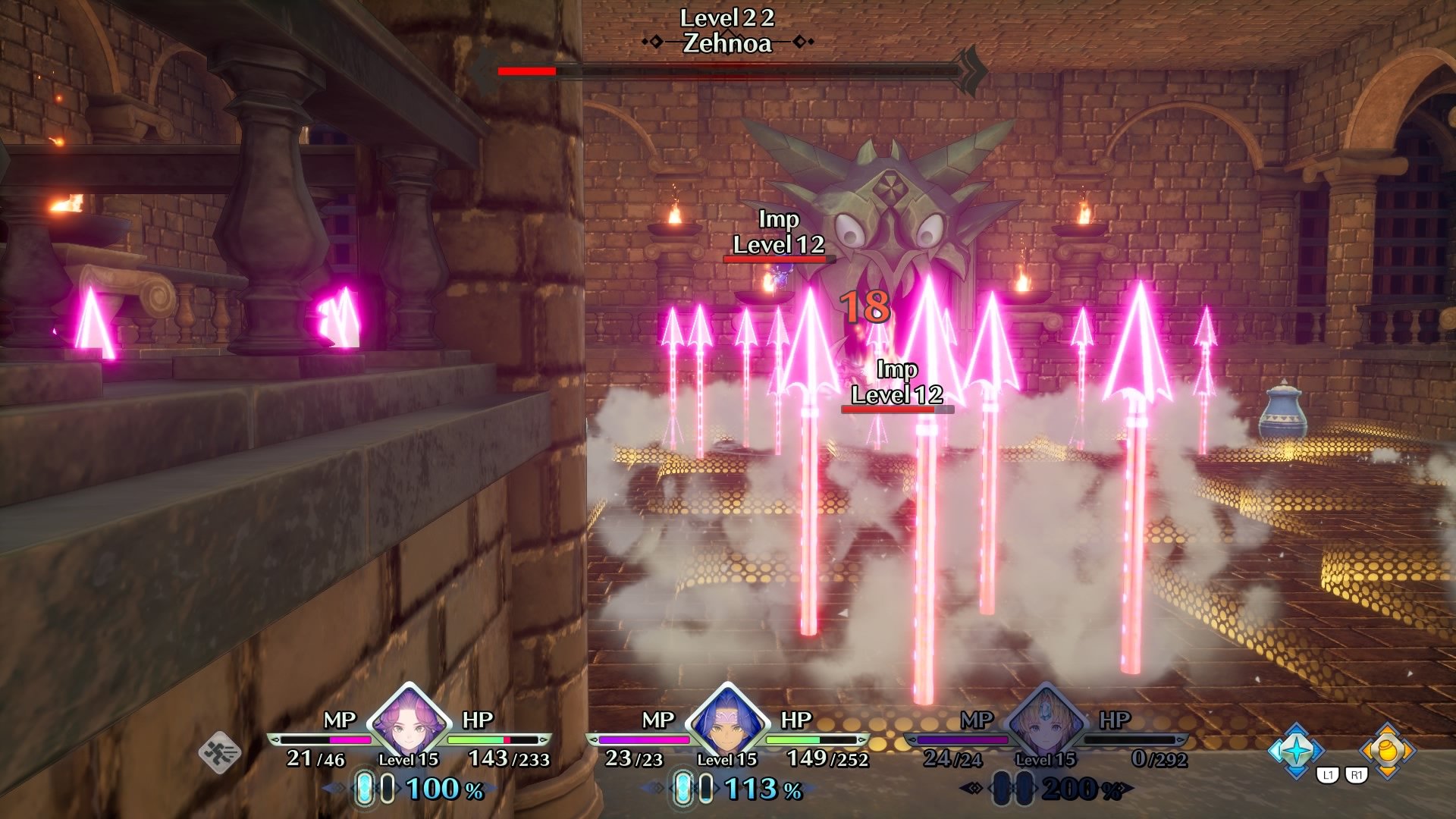 With how fair the game feels, and how well it marks out its attacks, it is frustrating beyond words to see my teammates get hit time and time again by things so easily dodged. There’s a necessary balance to be maintained in the design of non-player-controlled allies. If you make them exceptionally strong, they deprive the player of the satisfaction that comes from a challenging fight, but contrary to this, making them too weak or simple-minded, you’re left with a fight less challenging, and more frustrating. You’re left micromanaging your AI companions, as though they’re children with metal forks constantly drifting towards a power outlet.

As a whole, Trials of Mana comes across as a multiplayer experience forced into the confines of a single player game. Were this a cooperative adventure, I feel I’d be singing its praises here. Instead of having to constantly swap between characters to perform simple dodges and manage health, I’d be able to focus on myself. I’d be able to focus on the bosses, I’d be able to coordinate and laugh as somebody else took damage instead of lamenting it. The whole thing isn’t a system without merit, but to avoid frustration you have to decide between casting aside your allies as they die, or grinding out levels to the point of their HP being enough to power through. It’s not ideal for me, but to some that may yet sound appealing. 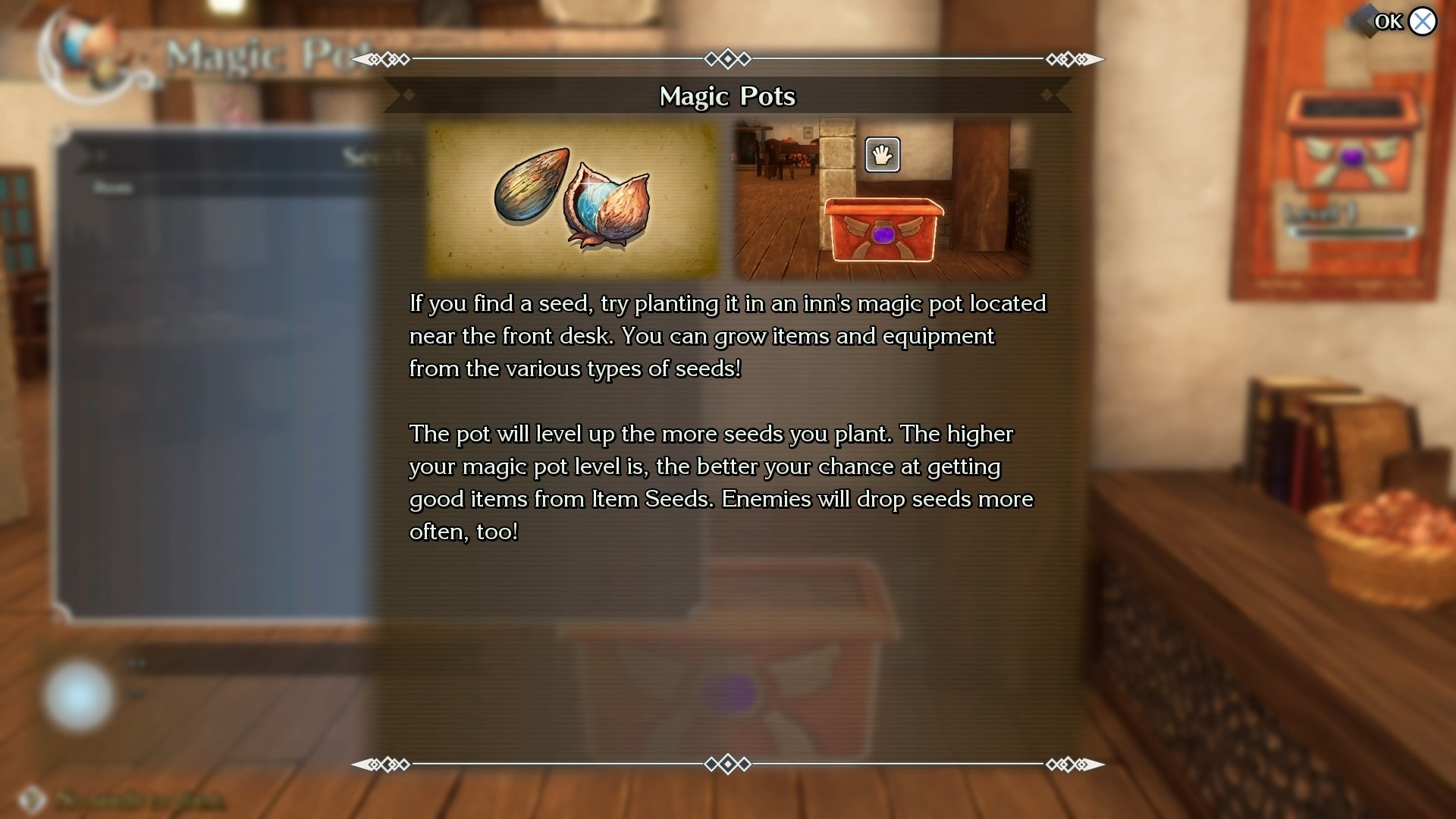 There are a few other areas of interest. Item seeds turned out to be a refreshing take on random loot; you find seeds out and about, and can grow them into items at inns. The more you grow, the better items you can get as the magic pot levels up. It’s small, sure, but when the item pool is all generally quite useful, you never really feel cheated by the randomness. As well as this, there’s a great deal of customisation on offer, somewhat of an expectation for many RPG fans. Through allocating skill points in various stats, as well as talking to NPCs, you can acquire abilities that can be distributed between party members as you desire. It’s a neat system that promotes skill allocation for a party, instead of looking at each character individually. You also have weapons and armour, but I felt a little let down in this department.

Where in many an RPG you’d have a wide array of weapons and armours of all shapes and sizes, with a variety of costs associated with them, Trials of Mana doesn’t seem to give you much choice. As you advance through each area and visit the weapon and armour sellers, you’re usually greeted with a single item for each character. It’s boring, and for a game shouting about its own customisation, I’d have expected more. It’s not even as though these items accumulate in the shops as you go on to at least pretend you have choice; you have a single item you either will or won’t buy. It just doesn’t sit well with me. 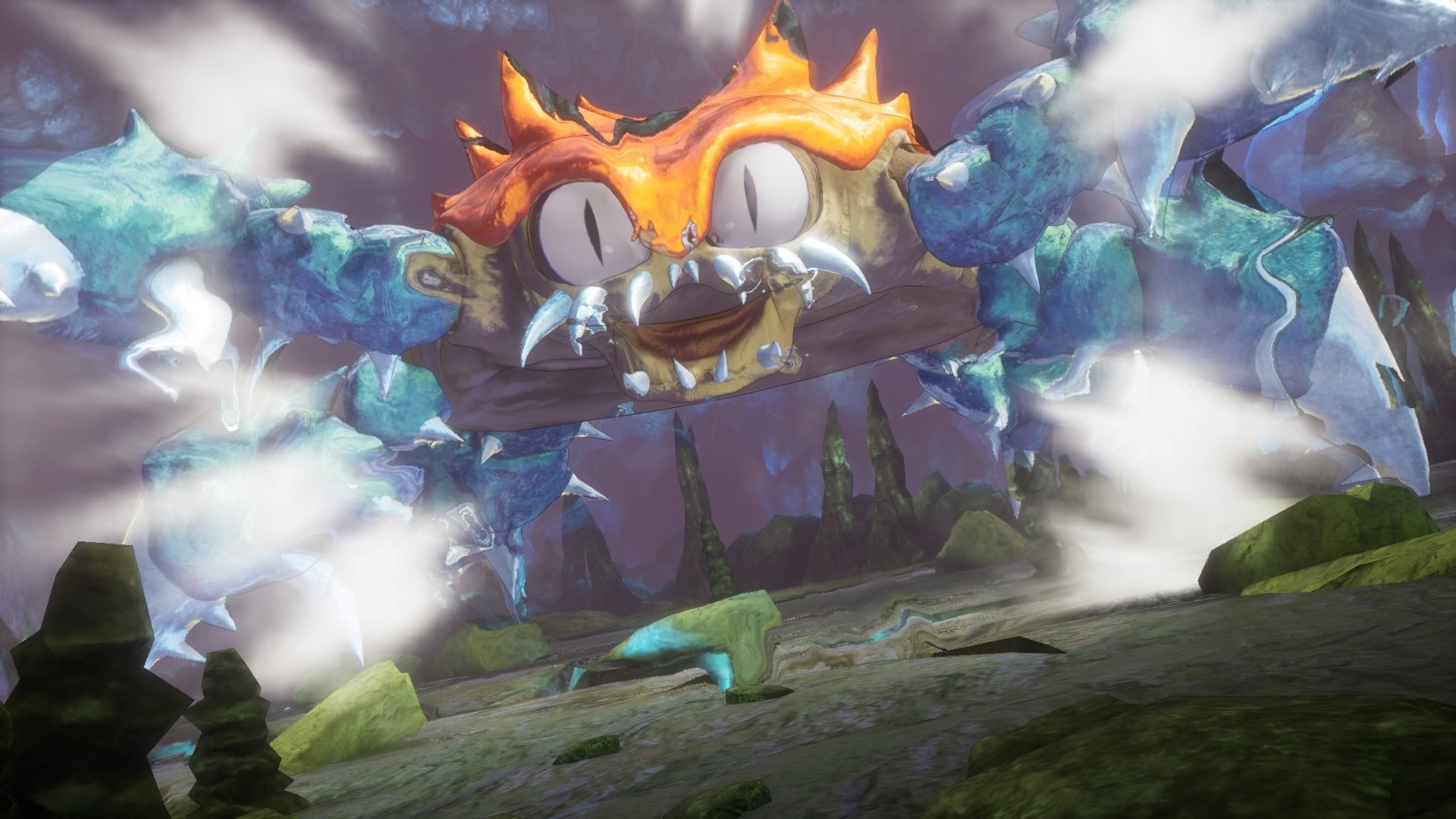 Despite its shortcomings elsewhere, one aspect of the game I struggle to find fault in is its soundtrack. It’s frankly delightful. Featuring a fantastic re-imagining of the original scores, it fills the game with the same sense of excitement and wonder I had hoped for going in. Like many a remake before it, you also have the choice of the original soundtrack, giving you a chance to compare, or even switch to it if you happen to prefer it. Both options are equally enjoyable, with the background music being one of few consistent positives as I played.

I really wanted to like Trials of Mana, and for the first hour or two, I really did. The story was captivating, as were its characters, but from there it seemed to snowball into a mass of frustration. If you're a fan of the previous two games, maybe there's something in this for you. As a continuation to the saga, maybe it warrants playing. For those looking in for the first time as I was however, there are better RPGs out there, go play them instead.