Single player
Local Multiplayer
Online Multiplayer
Co-operative
Pick up your sword, samurai; we’ve got a black-and-white game to play. Will you embrace the path of the bushido in Trek to Yomi?

Yomi: the word of “land of the dead” in Japanese; and that's where Hiroki, our protagonist, has to eventually travel through. But well before his fateful destination, we are introduced to Hiroki as a young samurai apprentice training with his master. But his tutelage is abruptly interrupted when his town succumbs to a raid that claims the life of his master. This sudden loss leads to Hiroki swearing to protect his town and close ones from such threats from now on. Little does he know that his vow will lead him to take his samurai yet again later in life to defend his hometown and embark on an otherworldly journey which leads up to his fateful trek to Yomi. 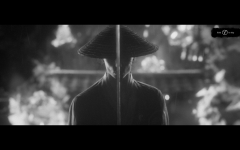 Trek to Yomi’s plot isn’t convoluted and you won’t find subtle cues about a grander meaning to Hiroki’s story. Save for some branching aspect depending on some path choices that the game throws at you, it is mostly a linear one. That doesn’t mean it’s bad but if you’re looking for a title that’s heavily focused on the narrative, you won’t find it here. This game sets its premise from the get-go and follows it, even if it occasionally stumbles in doing so. It does spice it up with a twist to the tone later in the game but it doesn't feel entirely off, unlike recent titles like ANNO: Mutationem. However, the narrative execution can feel off at times.

Rather than the plot, one of Trek to Yomi’s main focus is on the cinematic presentation. It bears a striking black-and-white palette with a film grain filter from start to finish that really emulates the experience of a samurai classic à la Kurosawa . This is accentuated by the professional Japanese voice acting, original soundtrack and the cinematic exposure of scenes that play out. You’ll get to engage in combat in fields, atop burning rooftops or on a tree trunk bridging a ravine. Often, you will encounter fight scenes that are enacted wholly or partially as silhouettes, and these were a personal highlight of Trek to Yomi. 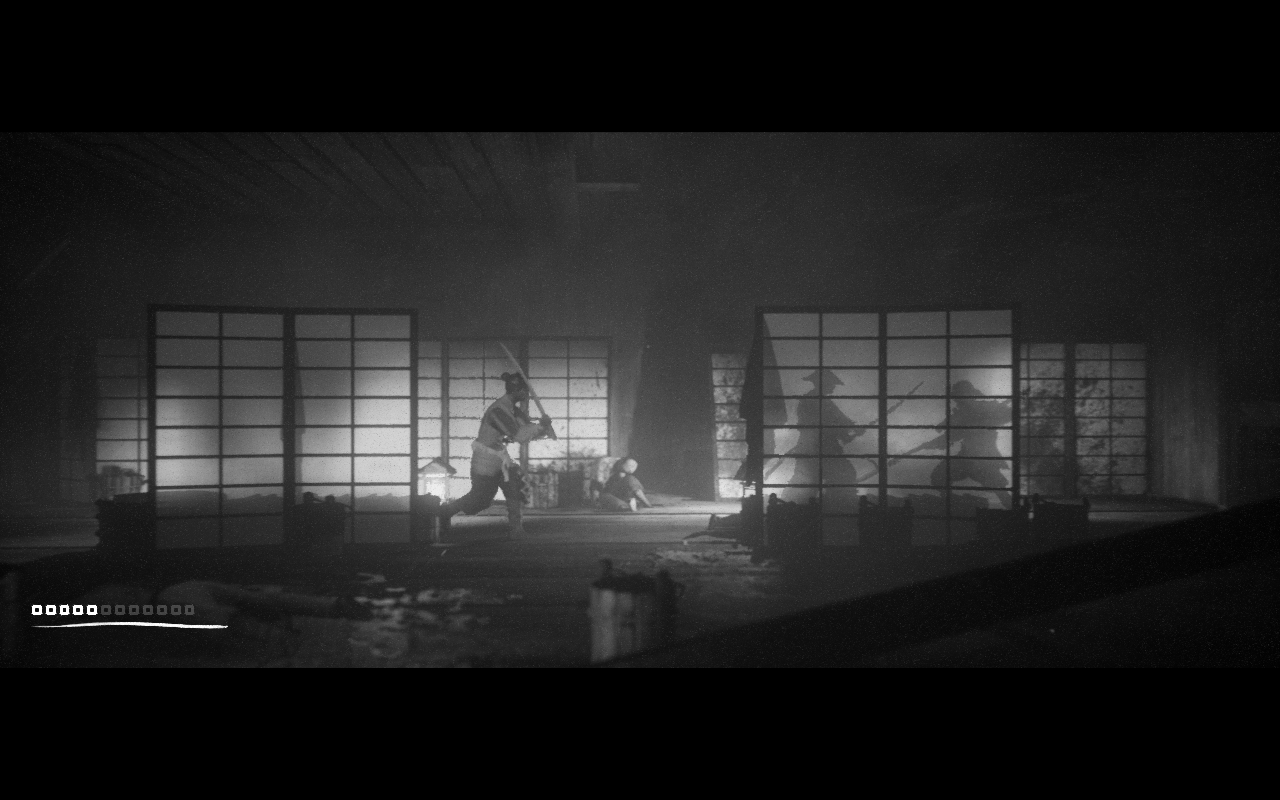 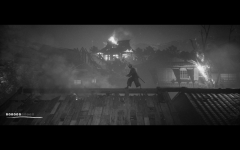 Combat is the other main focus of this game; and when it comes down to it, Trek to Yomi really boils down to a samurai-themed beat 'em up. Progression is done linearly in (mostly) a side-scrolling fashion with fast-paced combats that are enacted in waves. To take on his enemies, Hiroki can perform light and heavy attacks with his samurai, parry and pivot 180° to take on foes coming from either direction. These moves can be paired up for powerful combos and deal devastating blows. You’ll also have the opportunity to perform finishers that restore your life gauge. Later on, Hiroki also unlocks additional weapons such as the shuriken and a bow-and-arrow set for ranged attacks, enabling you to mix up your fighting style and take on enemies who are better dealt with from a distance.

While these moves do offer satisfying face-offs, especially with the splattering of your enemies' blood in monochrome fashion when they get a taste of your sword, the mechanics aren’t totally new in the genre and it feels like the developers wanted to play it safe with the generic mechanics. 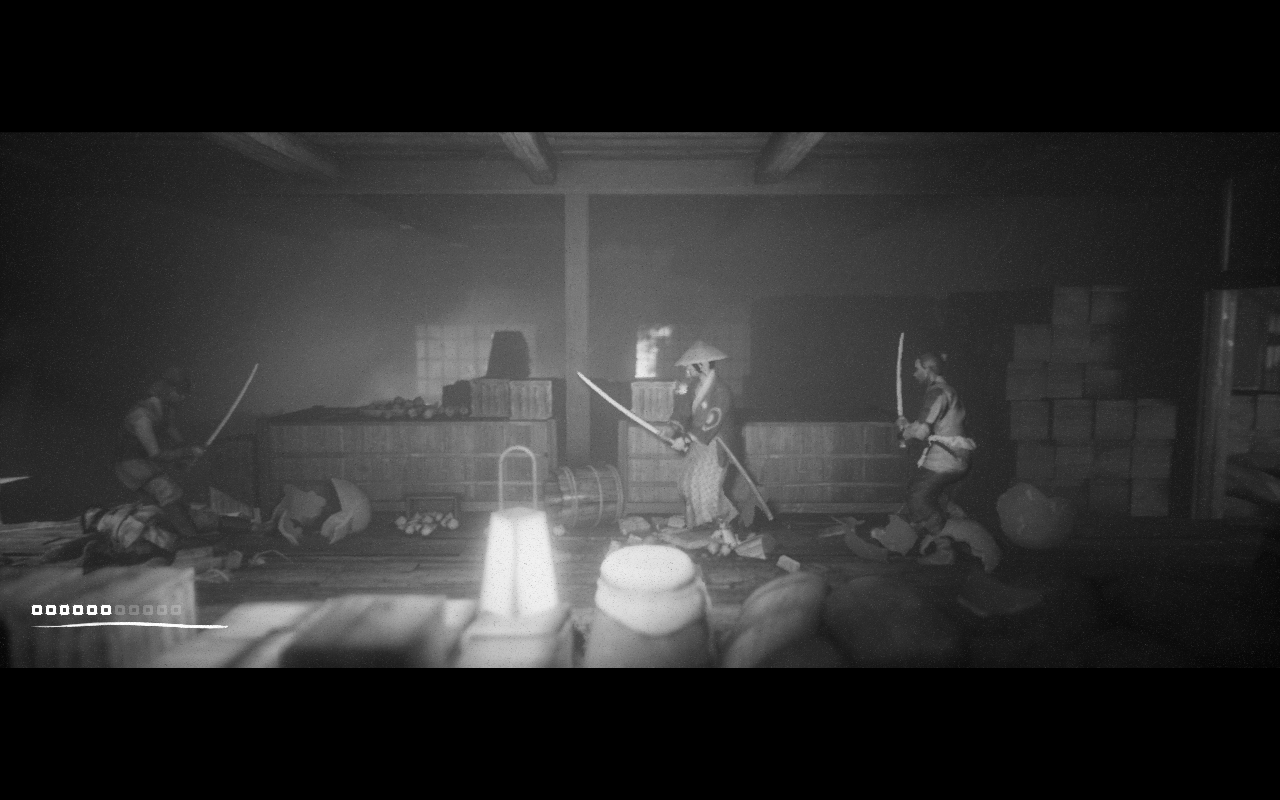 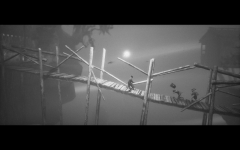 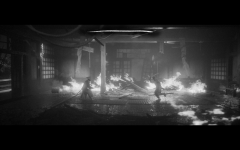 However, Trek to Yomi doesn’t rely solely on the traditional beat ‘em up formula as it also integrates some RPG mechanics as well as exploration. By finding hidden scrolls in the environment, you can unlock certain skills. Often, finding those scrolls will require you to wear your explorer’s hat during downtimes in between combat sequences.

In this way, even if it’s mostly linear, Trek to Yomi does allow for some degree of exploration to find items. In addition to skill scrolls, you can find items like additional bows or stats upgrades for your health and bow’s quiver. By exploring the environment, you can also find shrines where you can save your progress and restore your life gauge. These shrines are numerous but are a one-off affair, as you cannot return to one and make use of their ability to refill your life gauge if you’ve been badly injured in a recent fight. Thankfully they are not far apart and you'll find plenty to support you on your journey.

Interspersed among those exploration segments are some light puzzles. These aren’t hard by any measure but indicate an effort from the developers to add some diversity to the gameplay. 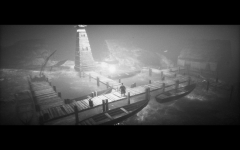 And I felt the need for diversity during my playthrough. Even if Trek to Yomi isn’t a long game, clocking at around 6 hours, the limited enemy types is evident. Fighting the same-y NPCs feels fresh for only so long. The different combat approaches and satisfying kills help alleviate the rate of encountering the same opponents but the gameplay would be made much more interesting if it offered more approaches to execute your kills. In particular, a stealth mechanic would work wonders here; imagine creeping onto unsuspecting enemies before delivering the final blow and averting a wave of bloodthirsty opponents while your life gauge is running low. Unfortunately, this is not an approach that is possible with Trek to Yomi as the game wants you to take every encounter head-on; even if you need to retry.

On the technical side, I didn’t encounter many issues as I played the game post-launch. However, I did have some qualms with the subtitles. While much effort has been put in the Japanese voice over to add some authenticity to the samurai movie emulation, non-Japanese speakers will heavily rely on subtitles. But not as much effort has been put on the subtitles themselves. They bear awful contrast with the black-and-white background, often making them illegible depending on the scene you are viewing. Having an option to add a background to the subtitles for better viewing would have addressed this issue.

Another gripe I’ve had is that the scene/camera orientation can get disorienting at times. At one point I'm moving up towards a building and once inside in the following scene, I find myself at the far left of the screen. These cases are thankfully not so common but are noticeable when encountered.

All in all, Trek to Yomi plays it safe with its generic gameplay mechanic, flat narrative and short playthrough, but its stylish presentation definitely makes it a memorable experience. As an indie title, it denotes a promising step forward for the developers.

What We Liked ...
What We Didn't Like ...
7
Gameplay
Trek to Yomi plays it safe with its generic gameplay mechanic that works well but would have benefited with more variety.
9
Presentation
The black-and-white aesthetic with the film grain touch and professional Japanese voice overs really nails the samurai movie atmosphere.
7
Lasting Appeal
It’s a short indie game and some branching aspect can entice future playthroughs but the limited enemy types and lack of varied gameplay mechanics are noticeable.
7.5
out of 10

Visually, Trek to Yomi is a memorable ode to samurai movies while it plays it safe on the gameplay side.
Share:
Facebook Twitter Reddit Pinterest Tumblr WhatsApp Email Share Link
I've seen a lot of different opinions about this game, but when it comes to the negatives, somehow I can only agree with the hard-to-read subtitles.
Even though it's not perfect, for me that game is a masterpiece, as the presentation and storytelling blew me away with it's Akira Kurosawa-styled direction.
It's a unique game that I've never experienced before outside gameplay, even if the gameplay itself is more common than others.
I'll gladly play it again in the next 2 years.
Reactions: Prans
But is there a way to remove the Dreadful Grayscale Filter?
When I was younger I had perfect vision. After 20 plus years as a tattoo artist I finally had to retire, and one of the biggest reasons was due to poor eyesight. I just don't understand why game designers do not make it an option to scale up subtitles and menus. Not everyone can read small ass fonts. especially on handheld systems like the switch. I have ran into more and more people who have given up gaming due to the same problem. why do they invest all the time and money creating really good games but let something as font size prevent a good chunk of gamers decide not to buy it.
Played it through Xbox Game Pass on my Series X, great game, yeah it has it's flaws but it's something different that we haven't seen before.
Its a nice but rather short game .... i like the idea of going oldskool samurai ... Lone Wolf & Cub .... the game Ogami Itto ..rides again ....
completed it recently [xbox series x], it's an impressive game let down by some terrible framerate stuttering issues in-game and the not so great combat mechanics - 6/10
Reactions: SuperDan