Log in Register
Menu
Install the app
You are using an out of date browser. It may not display this or other websites correctly.
You should upgrade or use an alternative browser.
Official Review PlayStation 4 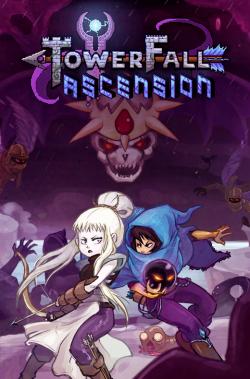 The words Ouya exclusive and 8bit art style never really fill me with confidence when it comes to new indie games. Although I think the Ouya is an interesting device I generally do not care for the casual type games you see in general on android devices. Having an 8bit art style in a game is also one of my pet peeves too. I think 8bit is far too overused these days and it is rarely executed well. I just consider it an easy way for indie devs to prey on the nostalgia factor of gamers and get attention for their game.
Towerfall Ascension first debuted on the Ouya Android home console and rapidly became one of the few must have titles available to the system. Developed by the small indie studio Matt Makes Games it has now been ported both to steam and to the PS4 as a download only title through PSN. This 2D competitive arena based battler only offers local multiplayer along with three game modes (Versus, Quest and Trials) for one to four players. Be warned however this title is firmly geared towards local group multiplayer even though there are single player modes, if you are a lone wolf who seeks his human challengers online this may not be the game for you.

Towerfall Ascension is a very simple game, with the action taking place on just a single sreen 4:3 arena, at first glance you wouldn't think there is too much to be excited about just by looking at it. Indeed simplicity is the recurring theme throughout the game as it only offers you three game modes and a selection of four playable classes which serve as little more than a change of skins. The objective of the game is also very simple, kill your enemy and do not get killed. To do so you have a mere three arrows at your disposal along with a jumping head stomp attack in a game where a single hit means instant death. As well as your two methods of attack you have a dodge button and a jump, you can also cling onto vertical walls and wall jump too. Adding to the fluidity of the gameplay is how the arena you play on loops your character from the top of the screen to the bottom and left to right in a manner reminiscent of old Atari arena battle games of old. If you fall down the bottom of the arena you appear at the top of it and continue falling. Arrows shot off screen to the left continue their trajectory from the right and so on. This simple mechanic, a throwback to the early 80's adds a wonderfully chaotic element to the gameplay where attacks can come from anywhere, there is always an escape route and you can even kill yourself with your own arrows. With these simple elements combined you get a frantic, fluid and surprisingly tense multiplayer experience with a lot of charm and that essential "just one more go" addictiveness. 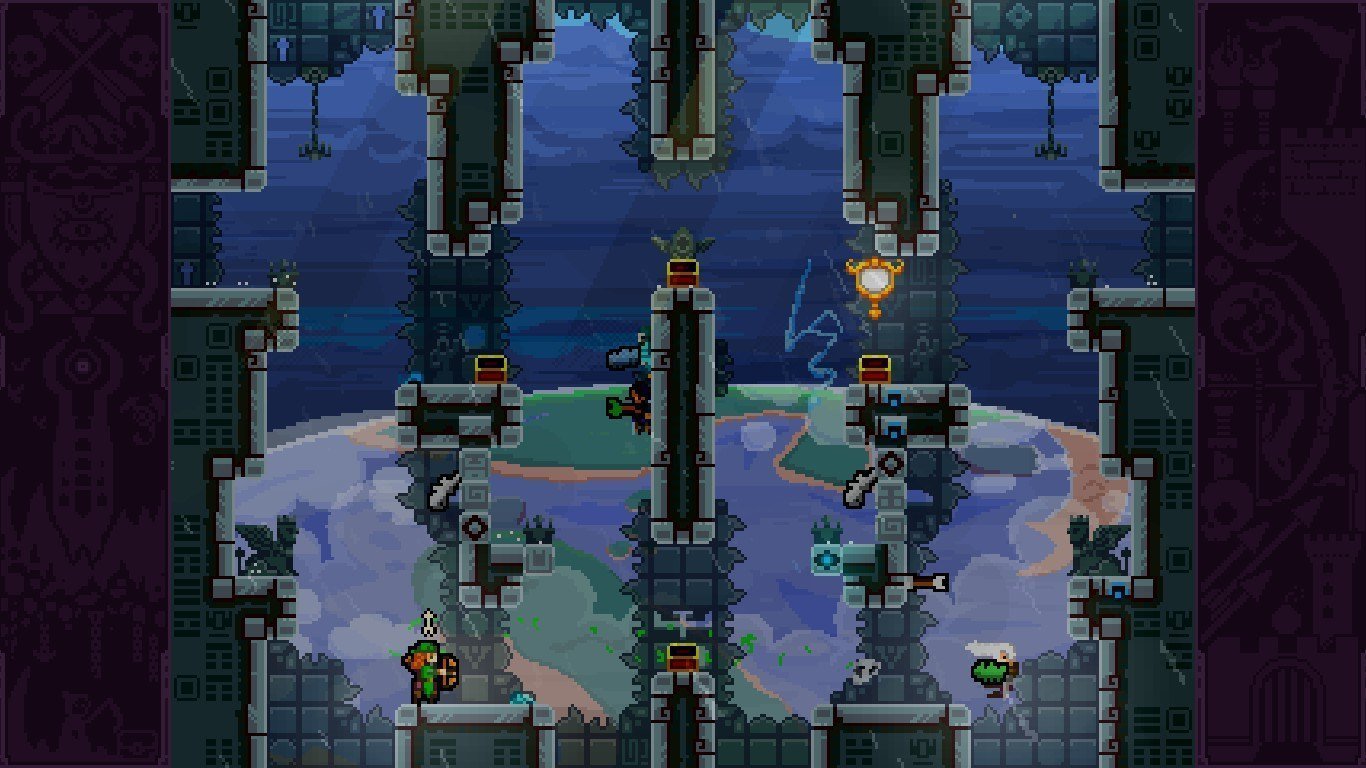 The looping level mechanic means some arenas are far more deadly than others!

The meat of Towefall Ascension is its Versus mode, it supports 2-4 players with no bots to fill any empty slots. Yes that is right if you are on your own there is no Versus mode for you as there is no online versus mode either. But if you get some friends together Towerfalls Versus mode easily becomes one of the funnest multiplayer experience available on the PS4. Matches become hectic wars of attrition as you cling to the hope of your enemy exhausting their ammunition before you, or as you wall jump your way from one side of the screen to the other and manage to hit a buddy with an unsuspecting head stomp just as they thought they were at their strongest. To stop things from getting repetitive and to keep the frantic gameplay going powerups pop up in game between rounds in the form of chests to mix things up whith such bonuses as exploding arrows, laser arrows, shields and even wings that let you fly around the arena by tapping the jump button. There are also random environmental hazards which get triggered such as lava, water traps, darkness and so on. For anyone who gamed back in the good old days before xbox live  and PSN multiplayer getting a sense of nostalgia and flashbacks of your younger years playing with friends huddled in front of a CRT TV is unavoidable. Having such simple and accessible controls also means that anyone can easily jump in and have a fun time which is one of Towerfall's major strengths as within five minutes of picking up a pad pretty much anyone will be wall jumping and head stomping like a pro. 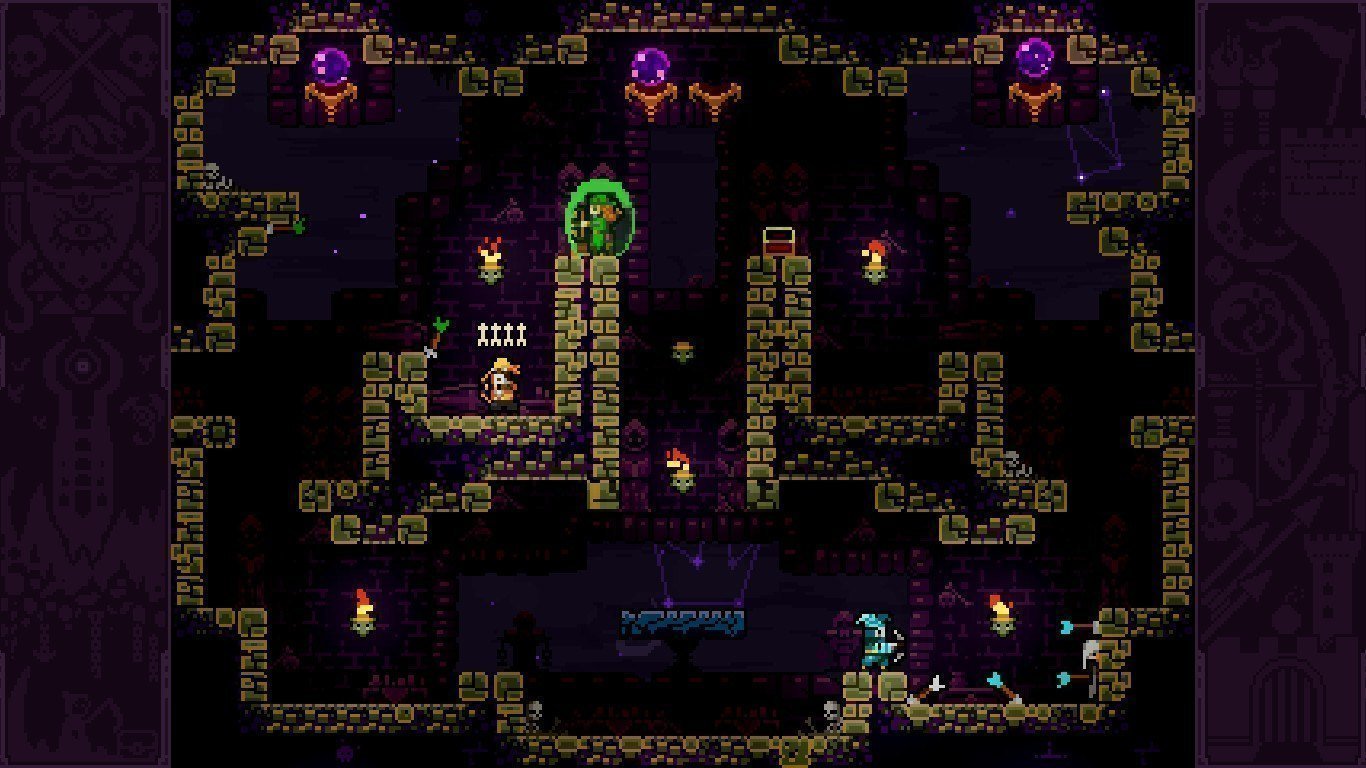 Shields and other bonuses found in chests can give you that crucial in game advantage!

If however you are stuck at home on your own and still want your Towerfall Ascension fix the other modes available thankfully support single player play. Firstly there is Trials which basically amounts to a speeedrun of each of the different configurations of arenas for each world. But how do you speedrun a single screen? You may ask, well dotted around the arena are several dummies that you must either head stomp or shoot with an arrow as fast as possible with the quickest time of completion saved for the next challenger. With some stages of Trials giving you a limited amount of arrows or the dummies you must dispatch being in hard to reach places there is a puzzle solving element to this mode too. But with only eight worlds in the game and with three arena configurations per world you will rapidly see everything the Trials mode has to offer as every stage can be completed in under one minute on your first run. 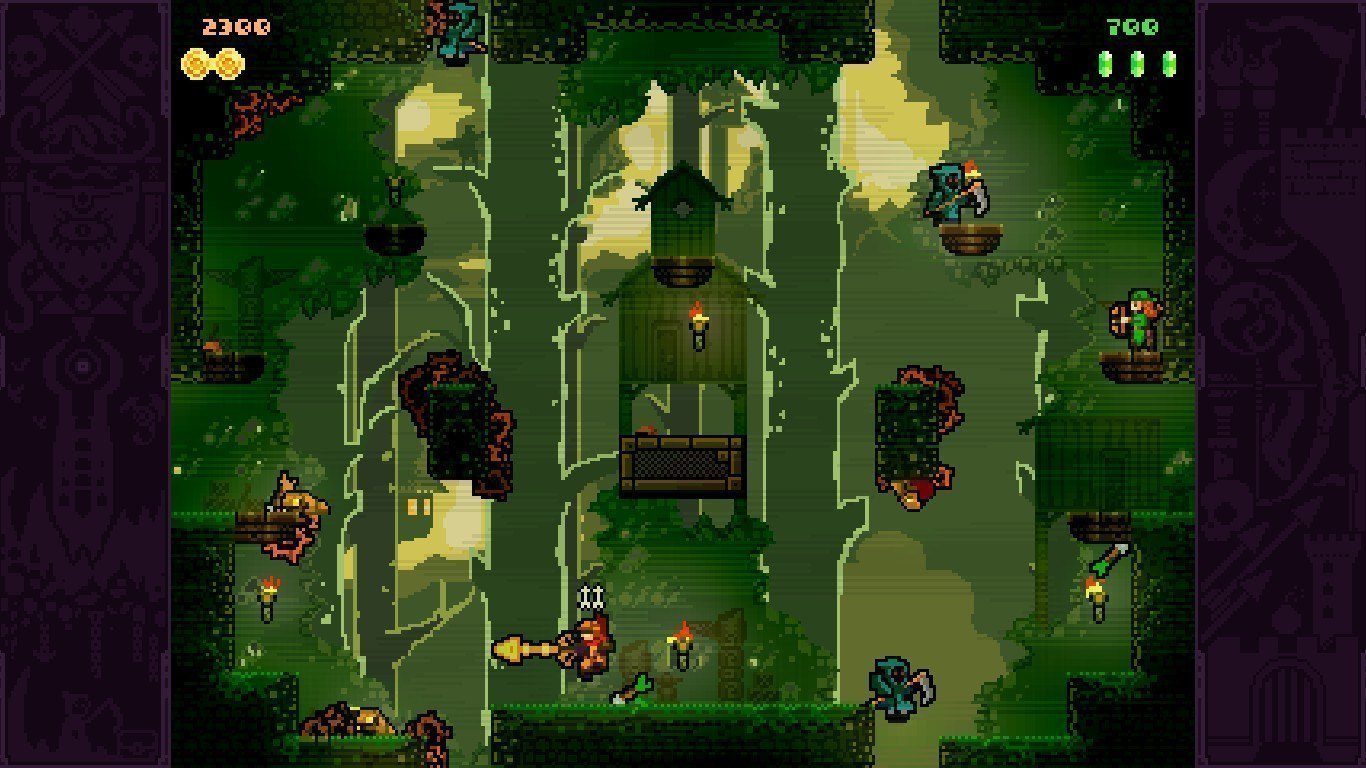 During Quest mode it is easy to be overcome by waves of enemies, beware the reaper his Scythe can deflect your arrows!

Finally you have the Quest mode for one or two players. Quest mode is simply a hoarde/survival type mode which has you visiting an arena in each of the  worlds of the game. As you progress you unlock new worlds on the map and the number of waves and their difficulty increases as they go on. You only have a limited number of lives to dispatch the different enemies you face and you get bonus item drops between waves to help you on the way. There is a nice variety of distinctive enemies throughout, all of which have distinctive movement and attacks patterns to learn with progressively more difficult enemies and more waves being introduced as you unlock and make your way through the worlds. With two difficulty settings, normal and hardcore there is plenty of fun to be had with a friend or on your own trying to survive to the end of each Quest as the later quests are devilishly difficult even on Normal mode. 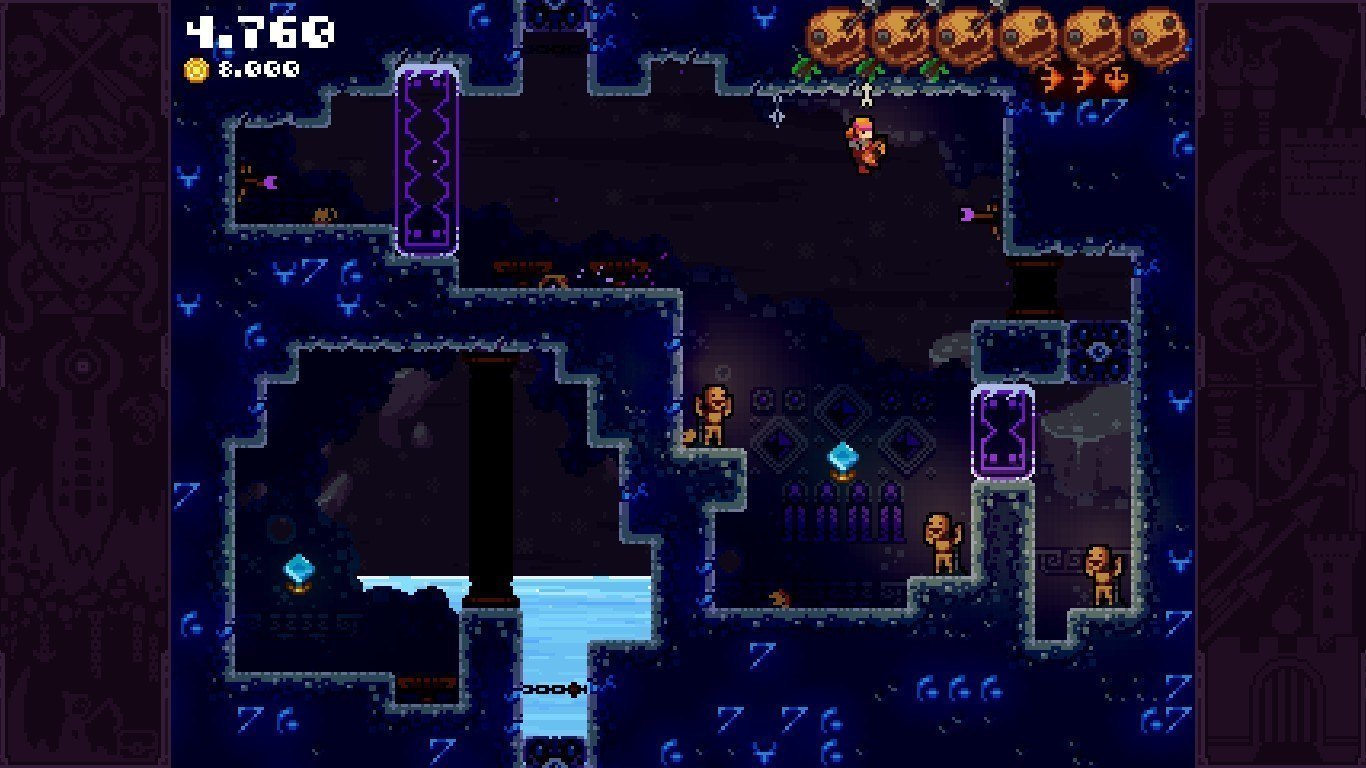 In trials mode sometimes it takes puzzle solving skills to be able to take out all the dummies.

Overall Towerfall Ascension is a nice little title with a deceptive amount of depth and complexity to be found in its simple mechanics. At a time when decent local multiplayer experiences on the PS4 are scarce this certainly fills a gaping void in the market. It is hard not to like its charming art style and music and it will definitely stir up a feeling of nostalgia in older gamers. Other than the fact that there is no online multiplayer and perhaps that the modes on offer are almost a little too barebones there is not a lot to complain about here. The controls are tight and responsive and despite the fact that you are limited to one screen there are a plethora of strategies which you can use to dispatch your opponents. The large variety of arenas available will keep you hungering for one more round of gameplay and if you own this game it will likely stay at the top of your play list when friends come over for a long time. If you are looking for a party game or just a challenging game you can have a quick blast of for ten minutes in Quest mode I would recommend Towerfall Ascension to you in a heartbeat and promise that you definitely will not be disappointed. 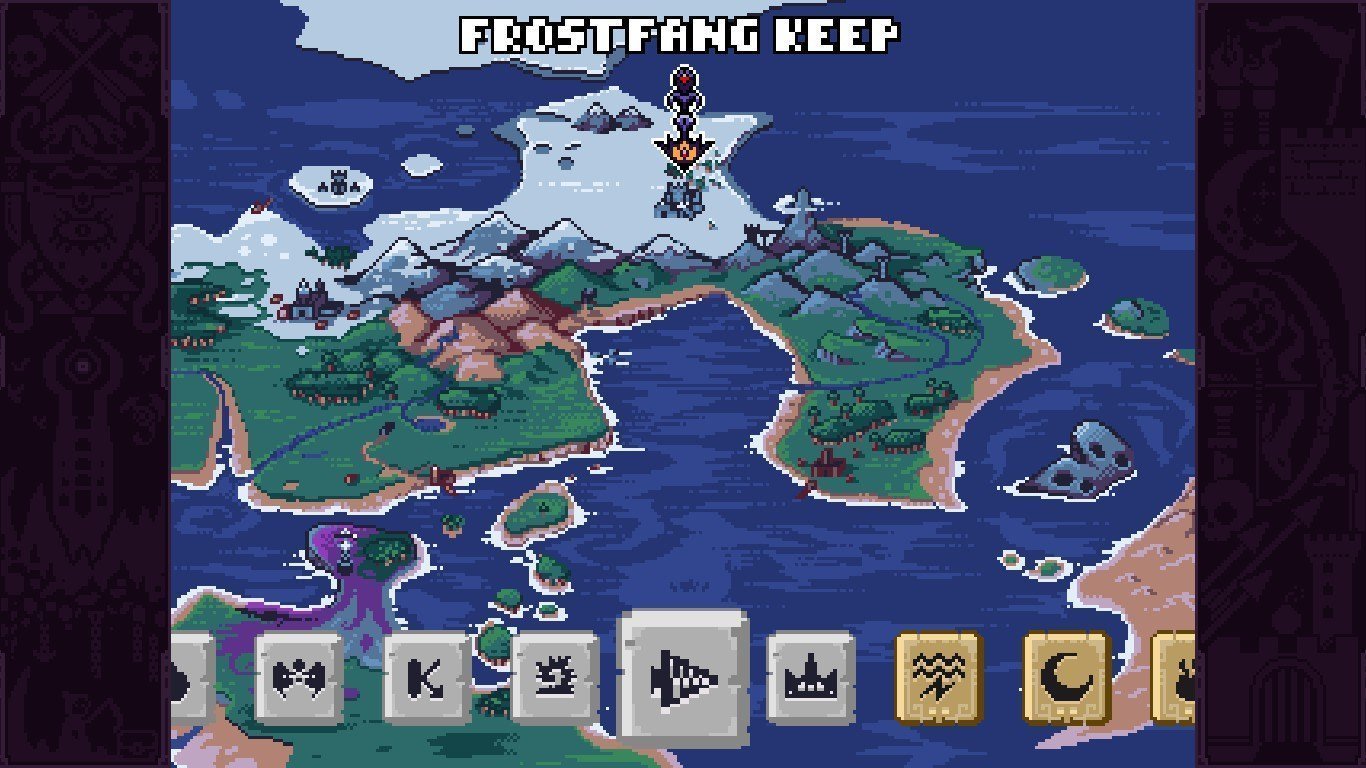 The Quest map spans the Length of Towerfalls fantasy world. 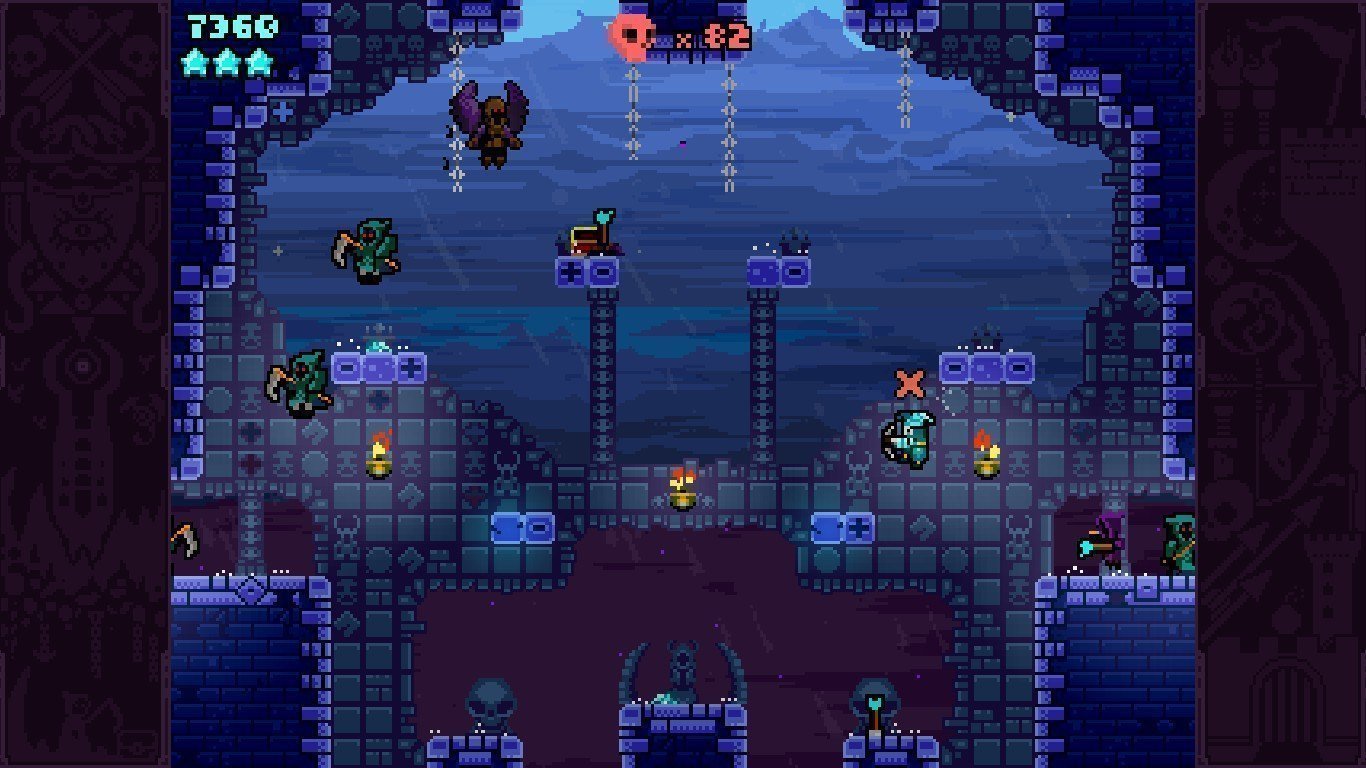 If you run out of arrows you have three options, retrieve the ones you shot, head stomp your enemy or run for your life!

What We Liked ...
What We Didn't Like ...
9
Gameplay
The simple but tight controls of Towerfall Ascension are easy to pick up with a surprising amount of hidden depth to master. A game like this lives or dies by its gameplay and TA is indeed a very fun and compelling experience with a group of friends or even on your own.
9
Presentation
The 8bit art style is really well done, you could really picture this in an 80's arcade. The music suits the game perfectly giving you a sense of adventure through well orchestrated chip tunes. There is nothing complex to see or hear in Towefall Ascension, but that is the point of it and it is executed perfectly.
8
Lasting Appeal
The longevity of this title really depends on how much of a social gamer you are. You will more than likely be done with the single player challenges and modes within a week. Apart from a quick blast of Quest mode every once in a while a lone gamer is unlikely to find a whole lot of replay value here. However as a party game when you have a few friends around it has almost infinite longevity. Simple enough for anyone to jump in and have a go this will be a game that will always be on your gaming rotation when you have company.
8
out of 10

A great local party game, it is a damn shame that there is no online mode for this. If you regularly have company this is a must have title and you wont regret picking it up. With a simple pick up and play game style pretty much anyone can have a go of Towerfall Ascension and have a good time. The overall presentation, music and graphics are charming and once you start playing even on your own this is a hard game not to like. However a bit more in game content would have been appreciated, as would the inclusion at the very least of some versus bots. Regardless, there is potentially endless fun to be had here amongst friends so Towerfall Ascension gets a well deserved 8.0 out of ten.
Reactions: T-hug, Ryukouki, Tomobobo and 1 other person
Share:
Facebook Twitter Reddit Pinterest Tumblr WhatsApp Email Share Link
Man I just discovered this game. My buddies and I have been playing a lot of it on pc and it's great. I've taken some time on the trials and the quest modes and it's all very enjoyable. Super competitive game though, fast and chaotic, all skill. One of the best games I've played.
Reactions: p1ngpong
Yeah it is pretty damn awesome right? I need to pick up a couple more PS4 pads to get the most fun out of it (and pick up a couple of more friends ;O;.)
Reactions: Skelletonike
Hey great review! I feel like this is my kind of game here and if I get that chance I'll definitely pick it up. Today I also learned that p1ngpong writes reviews.