Lights, switches, action! This is the RGB version of one of Japan's most idolized keyboard brands. Prepare yourself for one of the more unique keyboards out there.

In my endless conquest of keyboards, beginning with the budget-friendly Tecware Phantom, and most recently culminating with the Cooler Master MK850, I’ve seen a wide variety of different boards, ranging from ones that have maximum RGB power, to niche specialty switches, known and appreciated only by very few. I’m still having fun on my typing journey, amassing more for the ever-growing pile of keyboards that lay underneath my desk, and extra brain-space, reserved specifically for knowledge regarding switches, keycaps, and brand names. Today sees the addition of a very special keyboard; one that I’ve always wanted to try, due to its revered pedigree among the elitist keyboard community: Topre.

Topre Corporation, if you’ve not yet heard of it, is a Japanese manufacturing company that creates a wide variety of different products. Whether it’s cars, air conditioning, or printers, Topre seems to have a hand in creating all sorts of useful everyday items. As you can tell from the review banner and intro, we won’t be looking at their cars, sadly, but excitingly, we will be checking out one of their most notable keyboards, in the form of the Realforce RGB. 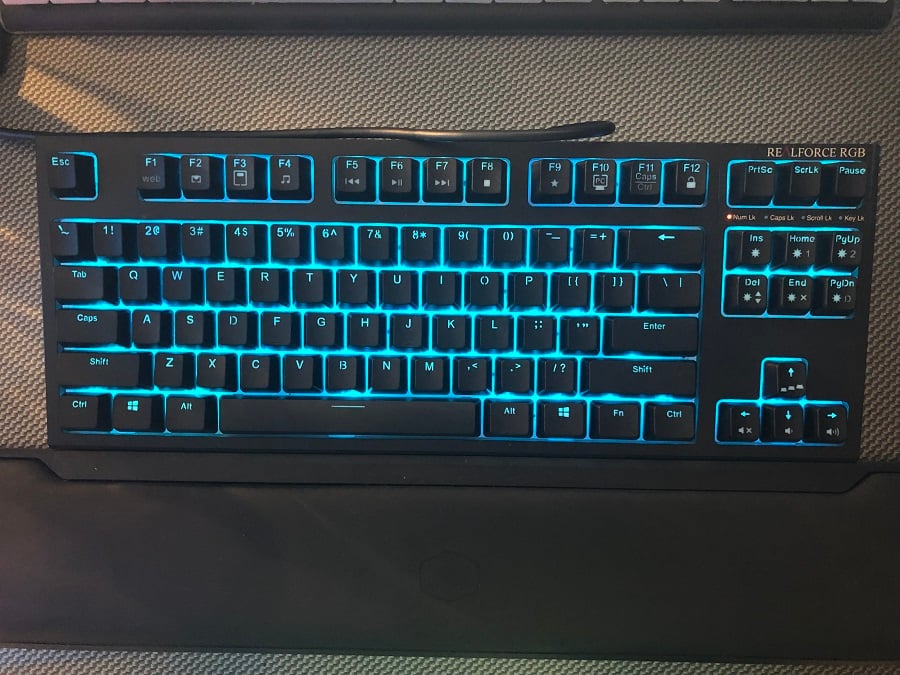 Where other keyboards that we’ve previously seen tend to have responsive mechanical switches, and cheaper, standard non-gaming keyboards have softer rubber-dome switches, Topre eschews all of that, by having their own special keyswitch, which is somewhat of a mix of both, yet incredibly unique, all the same. The result is something inexplicably satisfying to type on. Every click and clack, or in the Realforce’s case, every “thak” and “thock” sound heavy and solid, and feel every bit as tactile as any hardcore keyboard enthusiast could ever want. But before we get to the nitty-gritty, let’s take a step back and actually look at the Realforce RGB.

If your first response is that the Realforce RGB doesn’t look that much different from normal keyboards you’ve seen anywhere else, then you’re entirely correct. Where other brands may try to innovate or stylize, Topre keeps things simple by using the tried-and-true layout that we’ve all come to know and love. Most boards from this company tend to have a subtle appearance, looking right out of a typical office environment. Whether you prefer this or not comes entirely down to your personal tastes, but looking at the simple nature of the Realforce RGB feels nice; you’re not being assaulted by overly-bright RGBs, the backlighting is simple, all without any “cool elite gamer” visuals. In being so low key, the keyboard manages to look cool without even trying; it knows it’s a top-of-the-line piece of kit. It’s confident, it’s sharp; this is a keyboard that doesn’t need to prove itself to anyone.

Should you actually want that epic gamer flair for yourself, you can simply grab some keycaps and outfit the keyboard to your liking, as it supports any standard Cherry MX cap. While the default keycaps here aren't PBT, they happen to be doubleshot ABS. Despite PBT being the preferred style, the doubleshot plastic caps are great for letting light shine through. The lettering will also never wear down, as the printing is protected under that second layer of plastic. These keycaps are smooth and nice to the touch, but with the slightest bit of texture on them, to make sure your fingers don't slip on any of the keys.

As this is a tenkeyless board, and has a more professional/traditional appearance, there aren't any special knobs or dials for play, pause, or other similar functions. You'll still be able to control your media from the keyboard, though, as in lieu of extra keys, the Realforce uses shortcuts on the Function row, to quickly allow access to emails, music, and multimedia. 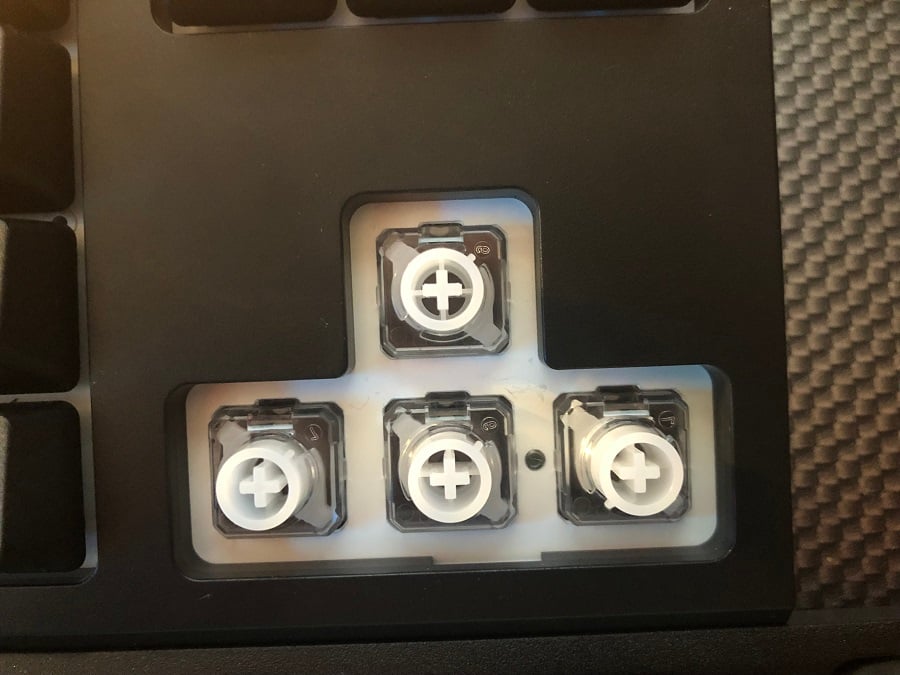 So, those Topre keyswitches. They're an interesting beast; not quite mechanical, and definitely not rubber-dome. They're in a league all their own, and if you want to get technical, are referred to as "electrostatic capacitive" switches. Underneath the keycap, and below the plastic stabilizers is a spring, which is what makes Topre keyboards so unique to type on. Not only does this make for such a cool typing experience, but it also gives the Realforce keyboard a longer lifespan, compared to regular mechanical switch keyboards. To break it all down, rubber-domes, the cheapest and most generic keyboard type, will last around 5 million keystrokes. Mechanical switch keyboards usually hover around the 20 million ballpark depending on what switch, but can reach as high as 50 million for the more durable keyswitch types. Electrostatic capacitive switches can reach up to 50 million keypresses in their lifetime, easily. Of course, these are just estimations, and most people won't max out the durability lifespan of their keyboard, but you can rest assured that the Realforce is built to last.

Speaking of built to last--the entire keyboard is the epitome of a quality build. Weighing in at over three pounds, the Realforce RGB is an unassumingly heavy little thing for its size. Usually, keyboards with plastic housings have a flex to them--after all, the shell is usually where companies cheap out on. That is absolutely not the case here; in fact, I'm pretty sure if you tried to grip this keyboard and bend it, your hands would be the one creaking and bending, rather than the keyboard. The Realforce is the kind of board you'd see in a game like Dead Rising, used as a dangerous weapon against enemies, one-hit-KO'ing anything with a single "thwack". It's high-quality in every sense of the word.

I still can't get over how much of a joy this keyboard is to type on. Each keypress has this bouncy feedback, entirely different from most mechanical keyboards. There's a tactile "snap" that occurs after each "tac tac thoc" of your keypresses. It's incredibly satisfying for typing, and it makes you aware of every key you hit. It's a weird mix of similarities between the response of Cherry MX Blues, but with the tactile bumps that Browns provide, combined with the simplicity and low-resistant actuation of a Red switch. Just because this is a fantastic keyboard to type on, doesn't discount the fact that you can game on it, as well. The keypresses are very smooth, meaning when you're playing games that require quick reaction times, there's nothing getting in the way of your inputs, and the key springs back instantly once you tap it. 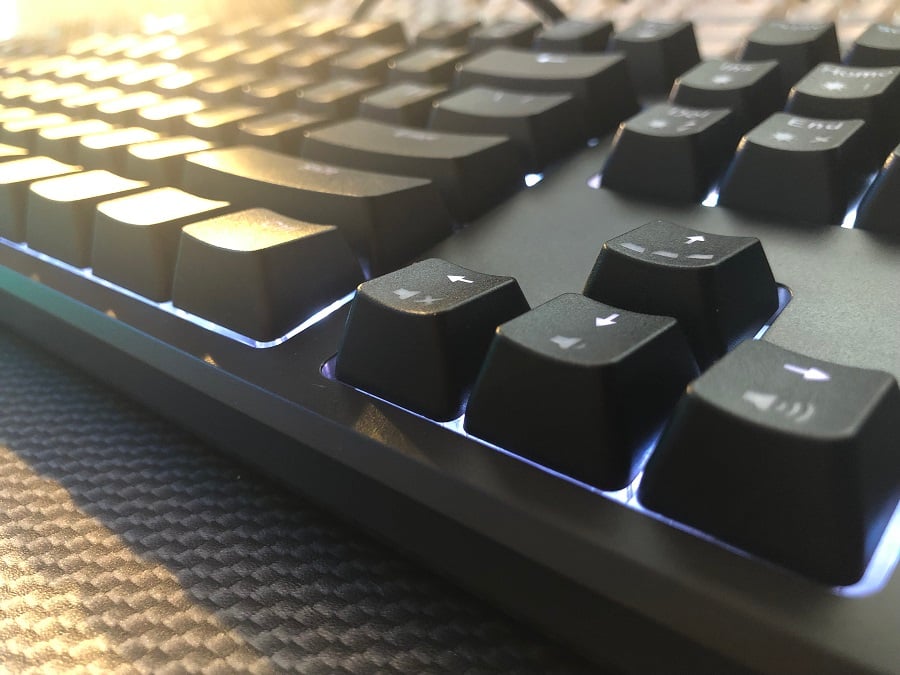 Much like any other gaming keyboard, the Realforce has dedicated software for changing up the RGBs and minor settings. I got along just fine without the software, only downloading it because I wanted to ensure it worked, for the sake of this review; luckily, the software works well and is easy to use, which is a relief. But, the biggest reason to use the software isn't for the profiles or the per-key RGB customization, no, but for the APC feature. With the software, you can set the actuation point of each single key on the entire keyboard, yet another feature unique to these special Topre switches. By default, the keyboard is set to 1.5mm actuation, which is perfect for FPS or RTS games that require quick, repeated presses. Then, there's the 2.2mm setting, which is the average setting for keyboards. For those that like to really hammer at it, though, you've also got the 3mm option, geared for typists.

If you don't have an active RGB setting, then the keyboard will light up in accordance with the ACP you've specified, which is a nice touch. (red for 3mm, green for 2.2, and blue for 1.5) Not many keyboards allow for customizable actuation, and it's one of the most surprisingly useful things that the Realforce RGB has to offer. As a bonus, you also get some spacers, which go underneath the keycaps, so that you can not only feel the difference in pressure, but also have the keys bottom out at different points across the keyboard. I didn't really pay attention to this feature at first, but once I got used to using it, I wholeheartedly enjoyed being able to customize the keyboard around each different game or genre that I was playing.

Currently, this keyboard is sold out on Amazon US, while the retailer for the UK, Keyboard Company, doesn't seem to have the Realforce RGB version in stock either. You can go through the international distributor of Topre--Fujitsu--and that seems to be the most reliable way to acquire one of these keyboards. There, the Realforce RGB is priced at a whopping $263.00, which might be too high a price tag for the average consumer. It's expensive, no doubt, but this isn't just a regular keyboard; for those on the western side of the globe, these kinds of keyboards fill a very pricey, but very select niche.

Boasting its special, exclusive electro capacitive keyswitches, subtle yet very even RGB lighting, supreme build quality, and adjustable actuation points, this is pretty much the Rolls Royce of typing devices. To most, these details are inconsequential, but for those that really care about the subject, they'll take notice, and once you test one out and appreciate the little differences, you won't be able to go back to your normal old keyboard. If you're the type of person who gets a kick out of nice keyboards, or someone who highly values their typing experience, I truly recommend picking up a Realforce RGB keyboard; they're just as odd and interesting and fun as their reputation makes them out to be.