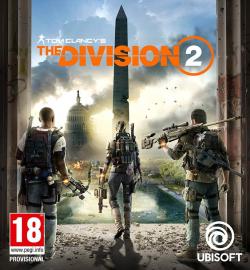 It's a controversial time for the looter shooter genre, meaning The Division 2 has a lot riding on its shoulders. Is Ubisoft's attempt something that players can get behind, or is it another divisive mess?

The MMO-esque looter shooter genre has found itself in a bit of a difficult spot, as of late. When Destiny hit the scene in 2014, critics found the game to be decent to mildly positive on average, but also heavily criticized the fact that the endgame content was lacking. Grinding for loot is one of the most important factors that you need to get right, because having a gameplay loop that is anything less than stellar can quickly drive away a majority of a game's playerbase. Shortly after Destiny, we saw the release of The Division 1, which received mixed reviews, because while it had a solid foundation, an overall lack of content and things to keep players interested made it feel repetitive and unrewarding. And of course, it's hard to ignore the performance of Anthem, EA and Bioware's AAA foray into the genre. Regardless of its high budget and renowned development team, Anthem struggled right out of the gate, being blasted by critics and and players alike for awkward, imbalanced weapons and shallow gameplay. With the current track record of major shooters finding themselves at the center of controversial, lacking, and buggy launches, it was easy to downplay the imminent release of The Division 2 at the time. Luckily, Massive Entertainment has managed to break free of the pitfalls that have held other looter shooters back, creating what is surely their best work yet.

It's easy to compare The Division 2 to its direct competition: Anthem is very similar in concept, and both games launched within less than a month of each other. If you're swapping over from the sci-fi based shooter to this, you'll quickly notice just how important small quality of life improvements are, and how it sets good games apart from the bad. The Division 2 is all about being seamless--once you're in-game, there's never a moment where you're spending minutes at a time waiting for something to load, and the dozens upon dozens of menus that you'll be clicking through to set your inventory are snappy. Small differences like this might not seem so drastic at first glance, but they quickly add up over time, and it's a quality that helps The Division 2 rise above other games of its ilk. 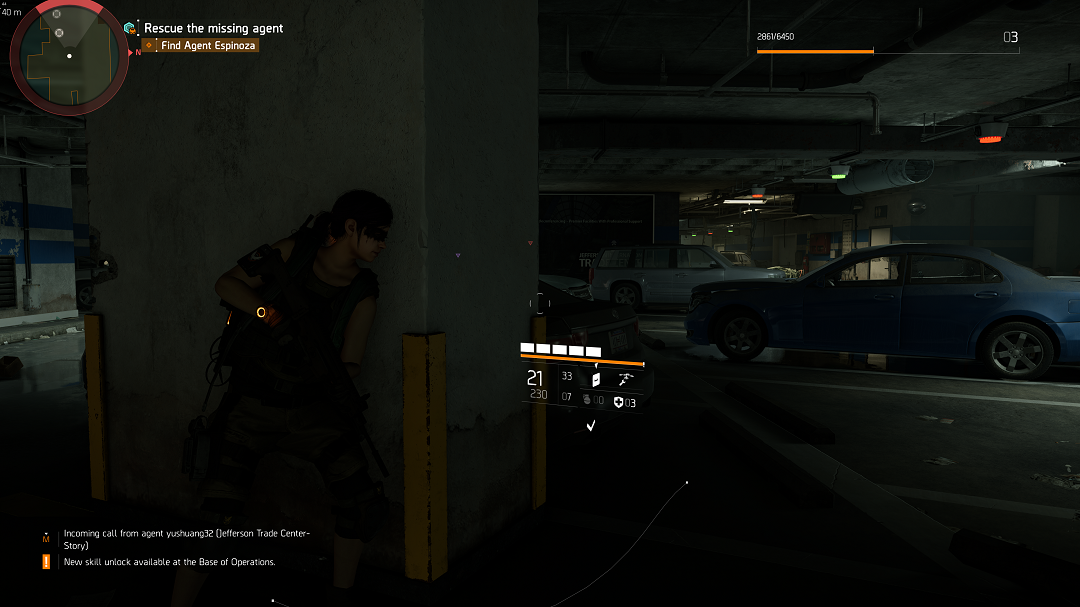 Of course, just because The Division 2 avoids some of the smaller mistakes that others didn't isn't reason enough to instantly brand it as an outstanding game. Thankfully, Massive also hit the mark on many other important aspects of creating a fun title. And there certainly are a lot of aspects to go over--the booklet that was included with the review code was a hefty 70 pages, serving as a 'quick' summary of all there is to experience within the game. That was the first signal that if you want to play this game, you'd best be prepared to fully immerse and invest yourself into the world of The Division 2, and all its intricacies.

Once you start things up, you're given the chance to customize your character; an agent of The Division, whose goal is to help recapture a post apocalyptic Washington D.C. from the rogues and terrorists that wish to wreak havoc upon the fractured country. From there, you're guided to the White House, the setting of your first gunfight, and the first of many landmarks that you'll be seeing on your journey. In terms of overarching story, this takes place mere months after its predecessor, in a scenario where the United States was ravaged by an engineered illness, and law and order quickly fell to riots and chaos amidst factions vying for power. This is a great setup for the story, which could lead to so many intriguing possibilities and motivations being explored, but though you're given a glimpse at how the world and its people are dealing with a disaster of this scale, it never feels like the game wants to delve too deeply into building its narrative, opting instead to serve as simple motivation to get the player moving from Point A to Point B. Which is all fine and good, but I can't help but be left wanting more, especially out of something that's using a property from a novel writer. 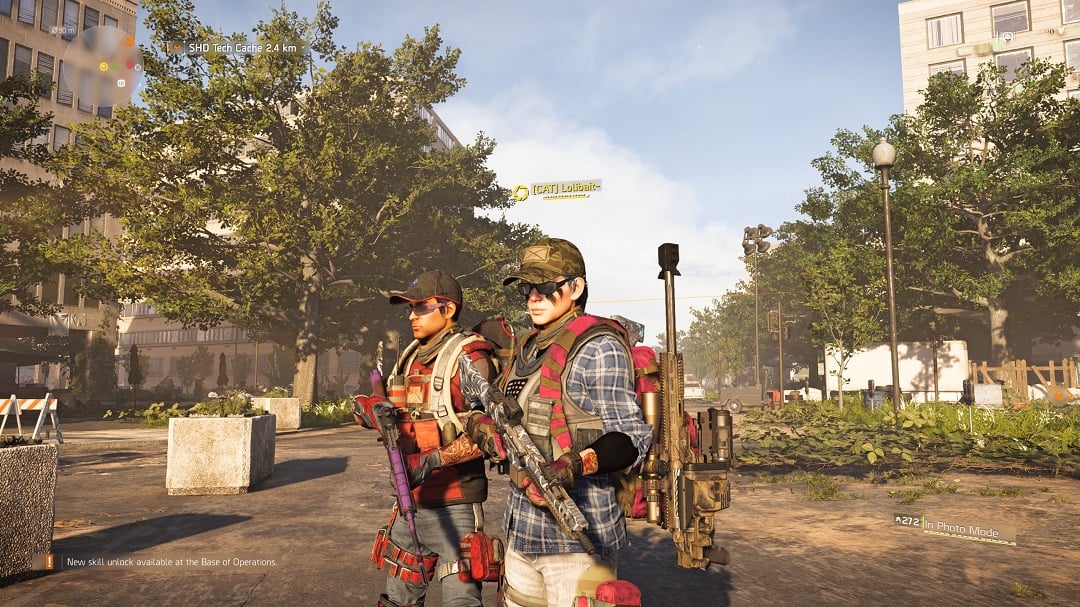 Despite the middling narrative structure, The Division 2's focus--pure gameplay--is where the game shines. As most exceptional sequels have proven, taking the best of what you previously built, and then refining those features tend to result in a stronger game, which is exactly the case here. Stellar level design, cunning AI, varied enemies, and hordes of differing mission types all combine to result in one of the best gaming experiences I've had in recent times.

When I think back to my time spent playing, one aspect that clearly stands out to me was exploring the museums where a number of main missions took place. The Air & Space Museum or the American History Museum were incredibly unique places to explore, with props and displays taking inspiration from real-life locations, and even having posters or signs full of legitimate information that would explain what you were looking at. They could have easily just been generic indoor areas full of objects to hide behind, but the developers took the extra time to create realistic locations that have memorable set-pieces. If you take your time to explore, once you've gunned down your opposition, you might even come across a souvenir of that specific location, which can then be attached to your character's backpack. It's one of my favorite parts about this game, and perfectly shows the added level of charm and heart put into these levels.

Another outstanding facet of the game world is how tight the level design is. From the lush plains, to cramped indoor offices, each area feels like it was meticulously made for strategic play. This isn't a game where you charge in, guns blazing, and if you decide to try it, the game will quickly punish you. The Division 2 is a tactical shooter and in order to win back D.C. from the bad guys, you'll need to scout out the best position, find good cover, and then take out enemies one by one in each of your battles. As one who generally tends to avoid shooters, I found myself unexpectedly reveling in the slower combat and utterly captured by just how enthralling it was to execute a plan, carry it out, and skillfully decimate the AI. Even in the moments where I lost control of the situation, and enemy reinforcements quickly surrounded me, I still had fun, because it was an opportunity to learn more about the terrain and think up a better way of handling the fight. 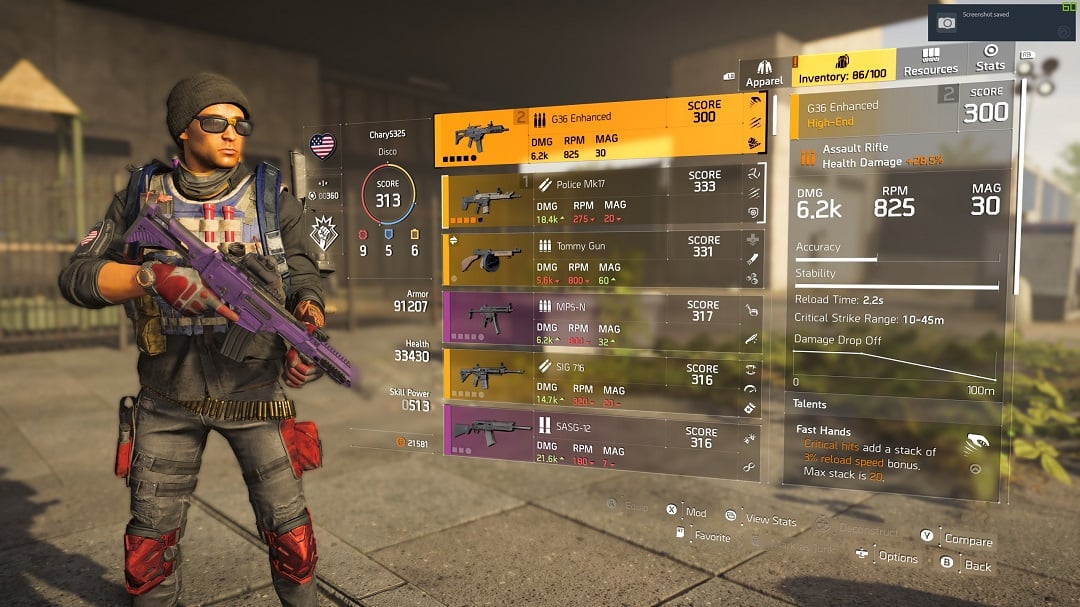 The reason why these fights are so fun isn't just due to well-crafted levels, but also due to the fact that the gunplay is so solid. There's a large variety of weapons to choose from, such as shotguns, assault rifles, sniper rifles, machine guns; the typical fare, all of them feeling different from each other in major ways, be it increased kickback, range, accuracy, etc. Compound that with the multitude of abilities each piece of gear can have, dozens of different mods to affect your stats, along with a diverse range of eight skill weapons, and you've got an insane amount of ways to play the game. The Division 2 offers a mind-boggling amount of customization, making for finding the perfect loadout for your play-style extremely satisfying. Depending on what you're up against, you might need to change your way of thinking and choose weapons that suit the given situation you're in, or, you might be determined to figure out a way to achieve victory with your current equipment: regardless of your choice, it all adds an extra layer to the gameplay.

The general consensus might be to scoff at the term "games as a service", but The Division 2 is a game that proves the merits of such a system. We saw how Massive Entertainment turned the rocky initial launch of The Division 1 into something leagues more enjoyable after post launch content updates and patches. The Division 2 is far more polished than the previous title, and knowing the developer's previous efforts, it sets up an exciting prospect for the future of an already stellar game.