If you've ever worn a smartwatch, you'll understand the annoyances of their short battery lives. Luckily, Mobvoi has come up with a smartwatch that'll last a whole month between charges: the Ticwatch Pro.

Smartwatches have become the technological evolution to the typical oldschool analog wristwatch. While smartwatches are still getting their footing in a fledgling market, and they can be considered a niche product to many, there are some useful features packed within, for both the health-conscious, and the everyday user. Today, we're going to put the spotlight on the TicWatch Pro, a smartwatch that promises to do away with the common inconvenience of short battery life, while packing in enough features and capabilities to potentially go toe-to-toe with Apple and Samsung's high-end offerings. So, does the TicWatch Pro live up to its claims, to earn a spot on your wrist?

Though I can't say I'm someone who focuses on regular exercise, the technology behind smartwatches has managed to pique my interest. Being able to check important message notifications without pulling my phone out of my pocket constantly sounded like it could have a noticeable benefit to my daily routine, which heavily focuses on dutifully keeping track of incoming news and PR emails. The TicWatch Pro offers an array of helpful features, such as Bluetooth, fitness tracking through heart-rate and motion sensing, GPS, NFC, and even LTE connectivity as of the latest revision, though it's limited to a single carrier, Verizon. While the Ticwatch Pro may come from a relatively new company, it has all the same bells and whistles that more well-known premium brands provide. At a price point of $249.99 ($299.99 for the LTE model), this watch comes in at $100 cheaper than the average Galaxy Watch, making it reasonably more affordable. 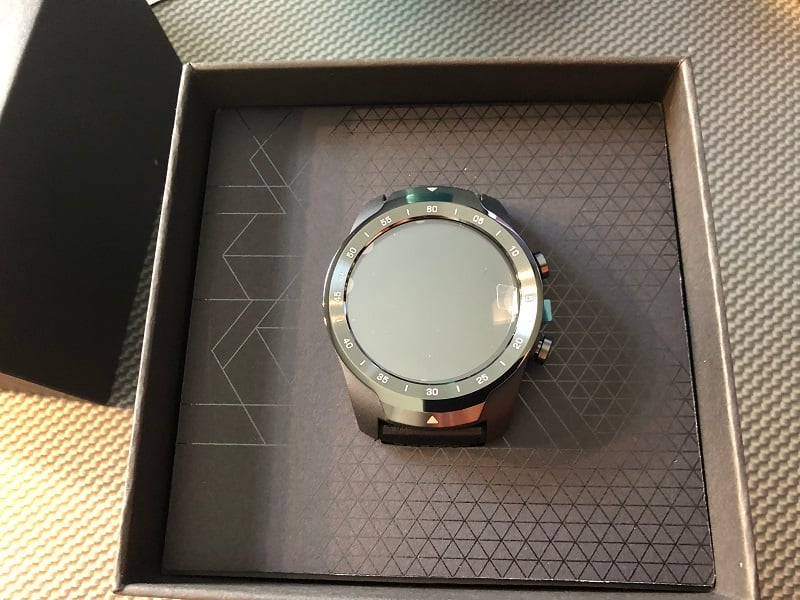 The biggest selling point of the TicWatch Pro is its battery life. Boasting not just one, but two screens, it's able to massively extend the amount of time it requires between charges. Where typical smartwatches might last a day or two, the Ticwatch Pro can keep going for a maximum of 30 days. This is achieved through the dual-screens. There's a lovely 400x400px AMOLED display, which is bright, colorful, and pleasing to look at, but on top of it is a film compensated Super Twisted Nematic (FSTN) LCD screen. When you're not actively looking at the watch, or using it, the screen swaps to the black-and-white LCD in order to conserve battery life. Simply lifting your arm or tapping the screen will swifty switch the OLED panel back on. It's an absolutely genius way of letting you constantly see relevant data, like how many steps you've taken, what time it is, and your heart-rate, without having to massively drain the battery. This feature is unmatched by any other smartwatch, and puts the Ticwatch Pro in a league of its own. It's such a simple thing, yet it impacts so much; rather than having to constantly worry about your battery level, the watch knows when to conserve. If you enjoy an always-on screen, you can have that as well, by ticking a box in the settings for it. In times where you might have forgotten your charger, or need to use as little battery as possible, you can turn on the Essential Mode, which turns off everything except the LCD, and displays only the bare minimum, meaning, even if you're on the verge of running out of charge, you'll still have something that can function as a basic watch.

Functionality should be first and foremost, when it comes to smartwatches, but if you're going to be wearing something on your wrist for extended periods of time, you'll want it to at least look visually pleasing and be comfortable to wear. Large, dark, and imposing are good descriptors of how the Ticwatch Pro appears, out of the box. The watchface is fairly sizeable, looking rugged and sporty, rather than sleek and slim. I quite like the style of the watch, but I found myself at odds with the bulkiness of the face, as it happened to be wider than my entire wrist. If you have a smaller or dainty arm, the watch might look just a tad too oversized, however, I do know that comparably, I'm built to be fairly frail, so it's not a wide-reaching issue. It looked a little goofy, wearing the watch so high up my arm, but it still functioned completely fine, staying secure, and comfortable the entire time. The outer part of the band is a faux-leather, with a nicely stitched outline, while the inner part is made from silicone, which keeps it cool when you're working out and sweating, and soft when you're sitting idle, responding to messages on the watch. Should you want to change up how the watch looks, the band is fully replaceable. 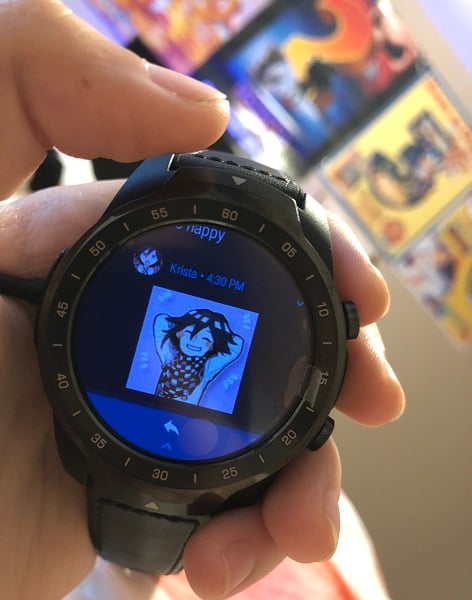 The performance of the Ticwatch Pro is decent enough. The UI is nice, and the menus are fairly smooth, aside from a small hitch from time to time. Rather, the problems I faced had to do with the apps, more than anything. Whenever I tried to use Google Fit, it would just tell me "didn't save" whenever I tried to input my information. The annoyances only grew when I attempted to customize the watch face with Facer, which required me to triple-tap the screen in order to bring up a menu. No matter what rhythm I tapped, or how many taps I made, the app refused to acknowledge that anything was going on. Cardiogram would incessantly alert me with a notification that could not be dismissed. My troubles peaked when Google Play itself would outright quit out, when trying to scroll through the apps list. Luckily, at the very least, the included Mobvoi apps were fluid and usable without any grief, but the fact that WearOS--backed by Google of all things--was this issue-ridden, only served to be a deterrent. There was never really a moment where I could say I wasn't pleased with the Ticwatch Pro itself; of my major faults lay with the operating system and its apps.

Internally, the watch rocks a Qualcomm Snapdragon Wear 2100, with 1GB of RAM, which appears to be the standard for smartwatch tech. There's also 4GB of storage, for you to keep your music and install your apps. Speaking of music, you'll be delighted to know that you can sync the Ticwatch Pro to a set of Bluetooth headphones, so if you want to go for a brisk walk, or intensive run, you'll be able to listen to all your tunes easily, without having to worry about constantly holding onto your phone. WearOS also offers a Spotify app, so you can stream your playlists on the go, if you have the LTE version, which costs around an extra $10/month on a Verizon data plan. Otherwise, if you do want to keep your phone on your person, the Ticwatch Pro can control your phone's full music library. 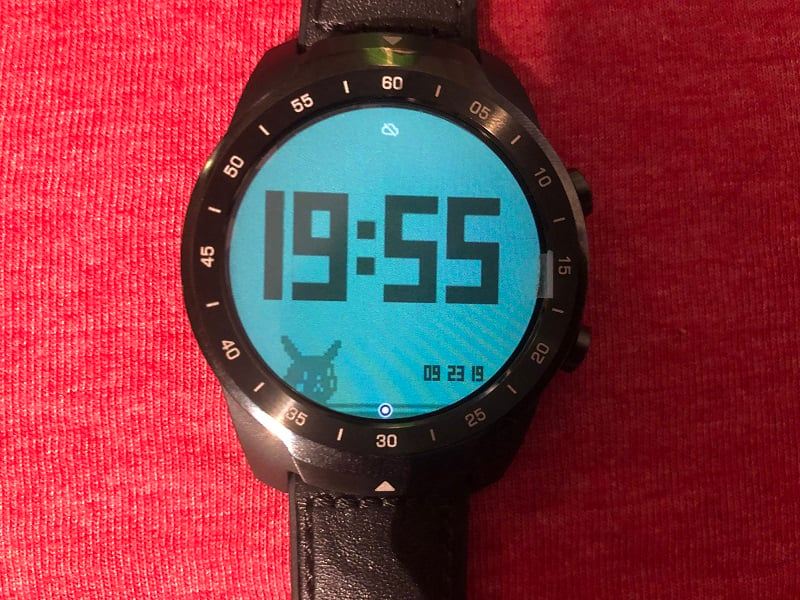 During my time with the Ticwatch Pro, I synced it to both an iPhone X, and the Huawei Mate 10 Pro, both of which worked flawlessly with the watch, never losing connection, nor having any issue in forwarding alerts and notifications. Even though WearOS lacked an official Outlook application, it didn't matter, as any incoming emails that went to my phone appeared on the Ticwatch Pro, allowing me to read the messages in full, without having to rush back to my PC, or desperately find my phone in order to see what I missed. I came to appreciate such features, and I found it extra amusing in the instances that I tried to respond to messages, through the tiny keyboard, surprisingly useful voice input, or simply drawing out each letter on the watch's screen. It wasn't a complete life-changer, but using the Ticwatch Pro definitely brought upon some improvements to my daily routine.

At $299.99, the TicWatch Pro sounds expensive, but if you look at the market, and compare the many features of this watch against its competitors, you get a fairly-priced little piece of technology for your wrist. Whether or not you'll get the most out of a smartwatch is up to you; people who are active and enjoy the outdoors through running, jogging, or biking can make great use out of the Ticwatch Pro, along with those who want to add a little rugged-but-professional flair to their everyday look, in the form of a device that can help complement their daily job. If you're not willing to make use of LTE functions, you can even cut a bit off the price. The only thing that really holds the Ticwatch Pro back is the operating system that it has to use, but as it is, WearOS is irksome at times, but still workable, and is continually getting updates, so at the very least, the future looks bright for the watch's OS.

Where to buy it? 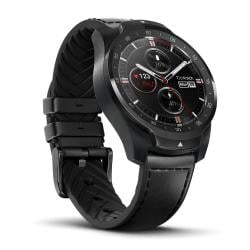