Escape rooms are a phenomenon that can push you to your lateral thinking limits. Can VR prove to be a good medium for this type of experience?

Fireproof Games are a UK-based outfit that originally began in 2008 as a studio crafting 3D environments for such titles as Killzone Shadow Fall, LittleBigPlanet 3, and many more, but in recent years they have personally manufactured a superb selection of their own games that deliver intricate and cunning content on a number of platforms, in particular the Room series on mobile. As a huge fan of the mobile phone games, I can say that The Room VR: A Dark Matter is an ingenious evolution from the simplicity of pocket play in the palm of your hand to surrounding you entirely in virtual reality.

Many years ago I played a game that sparked my love for first-person puzzlers and escape room challenges even before actual physical escape rooms you could play in were a thing. These games usually were online, Flash-based two-dimensional games with a simple aesthetic so that you could focus on the tasks at hand. I remember one in particular by Toshimitsu Takagi called The Crimson Room which was incredibly primitive, and cartoony in its cel shaded way, but it was utterly engaging. I remember thinking that puzzlers like this were an incredibly new genre to me and that this was a game style that I would enjoy as long as they kept being produced. After the Crimson Room, there was the Veridian Room, the Blue Chamber and the White Chamber, but the waiting period in between felt like an age, I wanted more! Fast forward eight years to 2012, we have supercomputers in our pockets, and Fireproof Games developed the cult escape room game enigmatically entitled The Room. I immediately jumped on the opportunity to play such a stunning looking game in the palm of my hand and made the purchase without thinking. I was not disappointed and wholeheartedly recommended it to my friends and family without hesitation.

This was the beginning of a beautiful friendship between myself and Fireproof Games, and year on year I proceeded to get the latest and greatest title they had on offer, steadily endorsing their wares to my nearest and dearest. Finally, another eight years on I now have an intriguing fusion of my favourite game genre and my favourite way to play. 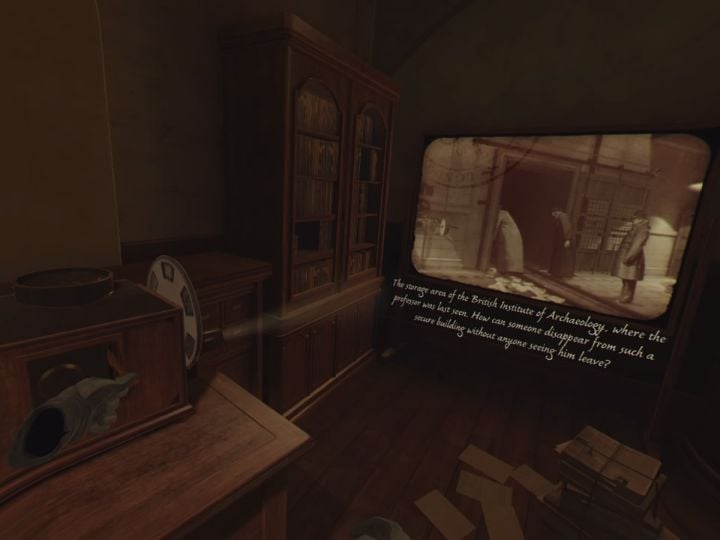 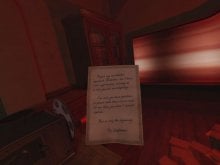 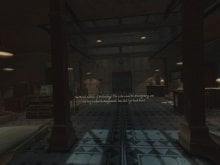 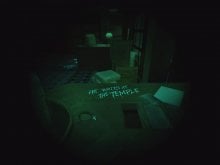 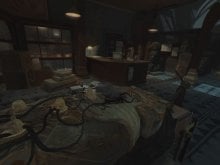 You begin The Room VR as a police detective, in what appears to be a 1908 Victorian-era police office set in Bloomsbury, London. It's completely befitting that you should uphold this profession as effective escape room games feed off of investigation and information retention skills. You start out as a pair of hands, free-floating in front of you with the basics in a tutorial sequence that ingrains the control methods into your muscle memory. You use a brilliantly simplified control system of snap turning with two buttons, opening your inventory with another button, and flipping on and off your lens with one final button. The top buttons work in conjunction with either of your hand's orientation to point-and-click teleport yourself around the scene; there is no free-roaming, but that concentrates your areas of interest into focussed spots around the stages. You use the triggers on either hand to instinctively grab and inspect items, twisting, pulling, and anything intuitive you need to do. The level of ease in the control scheme is exceptionally well-designed, giving you more time to focus on tasks and solving conundrums thanks to its sheer simplicity. Your first interaction is to click through a slide reel which briefs you on the current case at hand: the vanishing of an esteemed Egyptologist and the altogether peculiarity surrounding every aspect of the ensuing quandary.

The first couple of tasks get you used to the mindset of the developers and puzzle masters. You have to investigate your office, read a note and find a key, and ultimately figure out an alternative way into the safe, by solving a rather simple but clever blackboard puzzle, after finding that the key didn't work. This double-back from the obvious is a key method that Fireproof employs to cast you through red herrings and frustrating sequences that appear to have no resolution, with what you have to hand. The trouble is that you need to try every option, test every sequence and see it through to know if it's going to work or not. Trial and error only account for scenarios where you don't have a clue what you're doing or where to look next. If you get stuck there are always the handy time-released hint tabs in your inventory screen that you can use to set you back on track. There are mysterious cryptic papers scattered on desks and shelves that guide you throughout, but never forget that anything with a shiny surface could have a secondary use if you were to just see things differently. 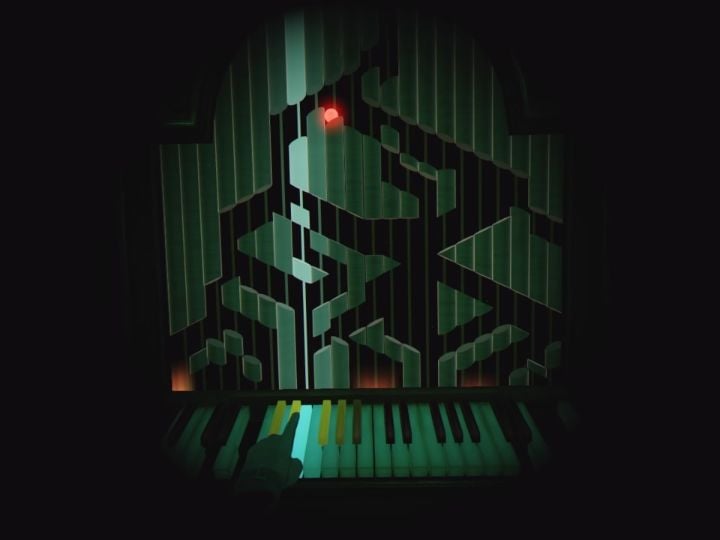 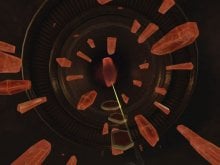 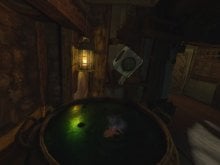 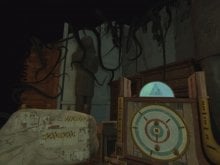 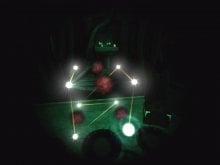 The game takes you through three distinct themes for its core experiences. The first brings you archaeological delights as you solve the riddle of the sarcophagus in a museum storeroom, the second takes you to explore a spiritual chapel, and the final is a creepy remote cottage where you get to unravel riddles through your powers of spell casting. Each setting is thick with atmosphere, laden with tasks to complete and a definite, distinct narrative to unfurl. Each of these unique and fully fleshed out locations contain a number of puzzles with multiple steps required to solve each of them. These range from simple combination lock-style devices that usually require you to find key components to complete said device first, to conundrums that toy around incredibly with scale and angles to the point that you are in complete awe of your surroundings as you investigate the same areas but at an entirely new perspective.

The key theme to these experiences borders on Lovecraftian, with creepy whispers, tentacles and slimy surfaces flitting throughout as you progress. For those with a weak constitution: it's spooky cosmic horror and the hair on the back of your neck will stand up on end, but there are categorically no jump scares. Essentially the story is a thread that loosely binds these places together, and you are tasked with following in the tracks of historical figures who attempted to solve the riddles, long before you got on the trail, but became unstuck. I really don't want to get into the mechanics of the puzzles because I don't want to accidentally give away any of the methods to attain the solutions, but at one point you have to repair an instrument, examining it inside and out from dual perspectives, twisting, turning, pulling, and pressing parts of it in such a technically realistic fashion just to then be able to play the thing at the end, which in itself is another tricky game you have to master. It's a joy to partake in, and there are no chore-like tasks; everything is logical and ergonomically intuitive to engage with.

Graphically, this title is incredible. Every item is modelled perfectly and they appear to have a weight to them, every environment has an incredible sense of scale, with an aged, worn look that makes them feel grounded, totally organically believable, and that you are walking into places that have been around for a long time. No other game has given me this exacting infatuation with the scenery, and such an overbearing lust for exploration. The accompanying sound effects and ambience make the setting all that more believable. Objects that slide and click or roll into view or cleverly unveil themselves have a gritty metallic, glass or wooden realism to their foley. Wind rushing around you in spacial stereo, whispers of spooky entities surround you, and even the low end rumbling of a vault door opening or something heavy sliding or dropping really sounds amazingly lifelike and adds to the illusion that you're really there in this living, breathing world. 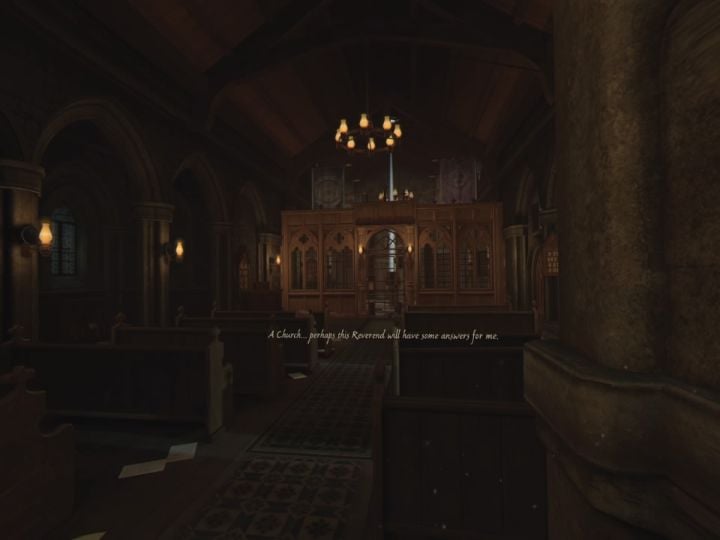 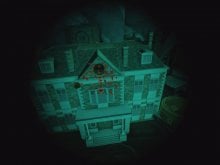 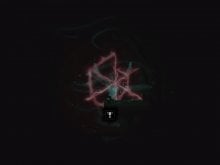 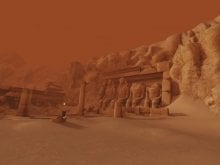 Though this game is best played standing, you can experience this entire odyssey from the comfort of a seated position. This means that the game is perfectly tailored for complete accessibility regardless of ability. At no point did I have to overextend to reach something up high, nor did I have to stoop down because I dropped something, or something too low down was out of reach. The game has been designed with this in mind to keep it as accessible as possible and as easy and intuitive to pick up and play as feasible. It's a commendable effort by Fireproof that means that if you did let go of an item and drop it, it will auto-relocate back to your inventory.

My only real gripes about this title are its underwhelming ease and its very short length. The game is merely too simple for a seasoned player of this game series such as myself, and while it is an absolutely gorgeous blast to play through and there are a couple of real head scratchers, I really did walk through the majority of this game with relative ease, and the final stage, after the three main levels, is an absolute cakewalk. That final jaunt has one or two minor puzzles before the final trophy pops. One last thing of note is a huge lack of easter eggs and trophies. This game has six trophies to obtains, all of which come naturally as you progress. There is nothing tricky to figure out, nothing hidden to discover, and nothing outside of the main tasks. I finished the game in well under four hours, what with taking screenshots and analysing the scenarios for review and I don't feel like I missed anything, though I can think of a couple of places where there should have been enigmatic easter eggs to find, they simply didn't allude to anything.

As it stands, this game is superb, a total masterstroke. It is the perfect use of VR combined with the ideal genre to match it with, but ultimately it's over too quickly and it's difficult to discern any replayability as the puzzles never change and the clues remain the same. If you considered that a day out doing an escape room would set you back £20-£25 per person, per experience, per hour, for the asking price of under £25, this title gives you three solid escape rooms and an undulating themed narrative throughout that kind of ties it all together, but rather disappointingly doesn't amount to any sort of crescendo. I am a huge fan of this game, what they have accomplished is nothing short of spectacular, but I cannot shake this feeling that they perhaps held back somewhat, or plan to bring more to it via DLC. I still have my fingers crossed for the latter. The ending feels so abrupt, that it's as if they cut it short purposefully.

Verdict
You, Chary, T-hug and 1 other person like this.
Unlike this review