I love first-person puzzle games, so this should be right up my ally!

The combination of a first-person perspective and puzzle elements is a match made in heaven. The reality it grounds you in makes it all the more playable and, if it's a believable world, it focuses you down into the important elements without distraction. The Pillar: Puzzle Escape does exactly this and transports you into a mildly cel-shaded world for you to unravel a mystery. You're trapped in a lucid dreamlike world of perplexing monoliths and you need to observe, react and overcome this world in order to escape the mythical maze!

As the name implies, pillars are the core... pillar... of this title, with each of the seven main levels heavily involving them throughout. The Pillar, in this instance, is an obelisk-like purple crystal that protrudes the soil and on each of its four sides is effectively a screen with a visual conundrum to negotiate. Once you have bossed each of the four puzzles, the pillar lets off an almighty crack of thunder and something else in the environment is unveiled as your next focal point, and the pillar then grows upwards and reveals yet another tetralogy of problems. The main puzzle types are fairly limited in all honesty, with just four main variants of slide puzzles forming the main components of this game, but with increasing complexity and scale making each proceeding challenge slightly more involved than the last as you progress. These "slide" puzzles range from simply joining two colours together across a path while ensuring the entire grid is coloured in, colouring in an entire grid in one continuous line, to remembering and duplicating Nokia-style snake-like patterns across the grids to complete the Simon-like memory game. There are plentiful puzzles per level with the latter stages offering multiple pillars and other side puzzles such as switch sequences and four-digit tumble locks, across multiple environments and with gradually increasing complexity. 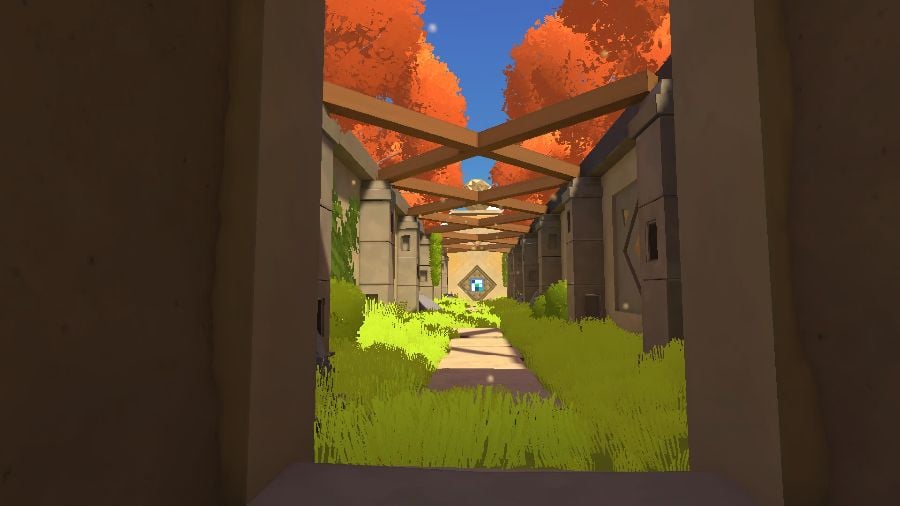 Controlling yourself in-game uses rudimentary FPS walking controls. Jumping in, I immediately felt that perhaps this game could have benefitted from a PSVR mode to really bump up the immersion. From moving around cubes Portal-style to jumping through portals Portal-style, there is a definite romanticism shared for the pioneering games that brought this very genre into being. The reason these mechanics exist is that they're visceral and engaging, but I feel that TPPE is missing any complex dimensionality and had there been a mechanic for jumping perhaps the singular plane of exploration could have been expanded to incorporate more intricate vertical riddles.

The game spans seven main stages with nods to more enigmatic places, most notably letting you run around a Stone Henge and Castle fortresses, with a chilled art-style reminiscent of RIME or a simplified Wind Waker. It's basic but effective. The environments set the scene, and give you ample space to work in whilst keeping you focused on the objectives ahead of you at all times. At no point did I get lost or bored with any part of this game, which is testament to the structural design of the sandbox giving you focussed freedom to roam about without distraction. It's obvious which direction you need to take, and where you haven't explored yet thanks to a gated system in most of the stages. Throughout your travels, you are also tasked to collect the fragmented art pieces to tick off as a small side mission. These pieces are often hidden out of sight or brazenly shown off in a cut scene, so you have to explore the locations and find that exact place you witnessed earlier on. Once all pieces are collected you have a complete tablet with an image of the environment to look at, and you can feel accomplished in your gaming prowess. As side missions and collectables go, I found this a little weak. Some are deviously hidden, others blatantly in your line of sight, but overall between 3-7 pieces to find in each level is a little underwhelming and didn't really draw me into wanting to obtain every single one. 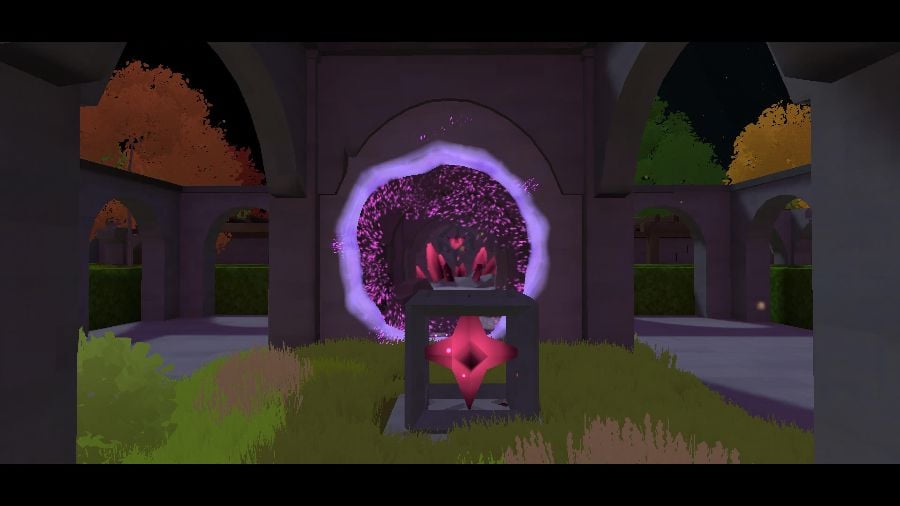 The bottom line with this title is that The Pillar: Puzzle Escape could have benefitted hugely from a little more diversity and more complicated puzzles. I found myself breezing through each objective without even really breaking a sweat, even with ones that looked superficially like they were going to offer me a real brain bender. I either have a succinct knack for these types of puzzles, or they were just too simple. I like to think I have crazy-mad-puzzling-skills, so I'll stick to that analogy for now, but overall the puzzles were largely a one-and-done affair for me. The most complicated and time-consuming puzzles are the copying games, which I'm going to be brutally honest about: I had to note down solutions to the last few because they became vastly complicated and impossible to remember all four colours paths perfectly in one turbo-speed demonstration. I think if you really wanted to, you could muse over these for far longer in an attempt to develop some brain training.

Path-based games have a pattern to them, and there is always a simple set of rules you can adhere to in order to solve the majority without much brainpower. Firstly: know the range of motion on the levels where you guide the coloured square around to fill the maze in one line. You quickly learn the patterns, like that if there is one square in the edge that has to be the end of the path, so you can work it out backwards from there, that's 50% of the puzzle done. Another method to call upon is that joining coloured blocks always require you to "go around the houses", a mantra I have ingrained in my mind that simply means the straightest path is NEVER the solution, you always have to quite literally go around the outside edges with one of the colours first in order to establish which ones need connecting together within the confines of that coloured border because you cannot cross paths. This method honestly works for 99% of those conundrums and makes it super straight forward to visualise the completed image before you even touch the control pad. Another pro tip I can offer is that if you have a four-digit pin to solve and find two of the numbers (in sequence), it's only a matter of deduction how very quickly to solve the other two numbers. A standard four-digit combination has 10,000 permutations, whereas a two-digit has just 100 possibles with tumblers displaying digits 1-10. I solved several of these very quickly without even finding the entire combination thanks to some quick thinking. 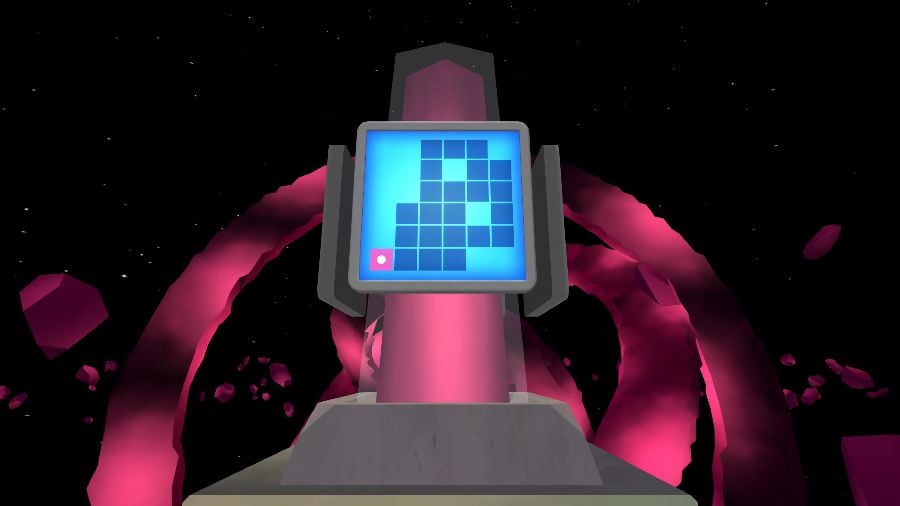 Overall, The Pillar: Puzzle Escape is a relatively fun game to blast through, but you can have it done entirely in well under two and a half hours, which is not awful for a £9.99 game. While it doesn't drag anything out other than when you go revisiting the levels to check off those last few slate pieces, this game is simply too short for its own good. There are moments that get your interest piqued with some interesting puzzles involving bending and mixing coloured beams of light, and there are also underdeveloped shooting elements in there too, but the core staples are overused and I honestly think there were either more than one way to complete each puzzle, or they were all criminally easy overall. I'm also certain that a couple of the puzzles had identical solutions, as I seemed to get déjà vu on several occasions. If the developers use this as a basis, ramp up the complexity and variety of puzzles and gift us with a sequel this game could evolve into an absolutely killer series to sink your brain into. For now, TPPE stands extremely intriguing but very much averaging in terms of difficulty and replayability.