In what is essentially a sequel to the much-loved All-Stars Racing Transformed, Sonic and friends return to the track with a brand new story mode and multiplayer mayhem!

It's been seven years since the last Sonic Racing game, with Sonic All-Stars Racing Transformed being released in 2012. With this in mind, you might expect Sumo's latest Sonic game to be leagues ahead, given how far we've come since then. While I found myself enjoying the game thoroughly, there are some things I feel were simply done better in both All-Stars Racing and Transformed. 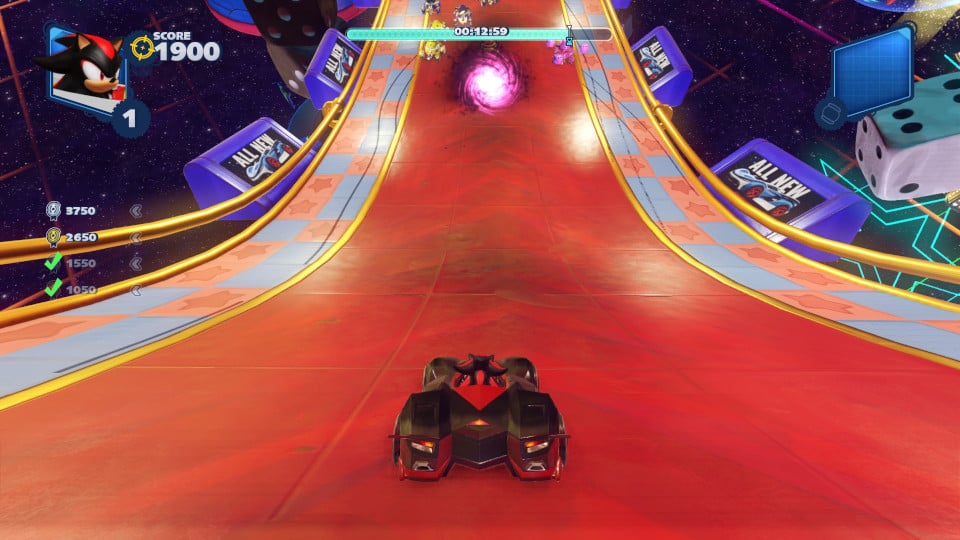 Let's start off with the most important part of this genre—the gameplay. Team Sonic Racing plays very similarly to past titles, with most of the new mechanics being based around teamwork. By performing actions in conjunction with your teammates, you can receive extra boosts in the form of 'Slingshots' and 'Skimboosts'. These new mechanics have the most impact out of everything on offer, acting as the best ways to gain speed. The 'All-Star' mechanic found in previous games is replaced with a similar 'Team Ultimate' move, giving all three teammates higher speed and invincibility for a small period of time. By hitting other players in this mode, you can extend the timer, as well as knock them down. The function of transforming your vehicle is gone, with the game sticking strictly to cars. This was popular with players of the Transformed game, but I personally prefer the simpler gameplay.

Now, this team-based gameplay is certainly fun, but it does get frustrating at times. There are plenty of moments where I'm disappointed in the performance of my AI teammates despite my efforts. This is particularly true of the power-types, who seem to fare worse than everyone else on the team. This dependence on teammates isn't as obvious in single-player, as the AI opponents are all of equal skill, but when playing online, weaker teammates are sure to drag you down, even if you do exceedingly well.

Instead of the generic power-ups found in previous titles, Team Sonic Racing uses Wisps, as is common in Sonic games today. This is a wonderful change, as the generic power-ups we had beforehand were uninspired and dull. The Wisps give the game the same charm you might find in Mario Kart items, with most of the offerings coming from other Sonic titles. Allowing you to transfer these Wisps to your team, the game gives you the option to help them out of sticky situations, as well as build your Ultimate meter. This is especially useful if you're in first place, as you often have little use for wisps. The game also brings Rings into normal races, which increase your score and maximum speed. These two aspects together make the power-ups feel less cheap than the weak ones found in All-Stars Racing and Transformed. Certain character types have exclusive wisps, making each type feel more unique. 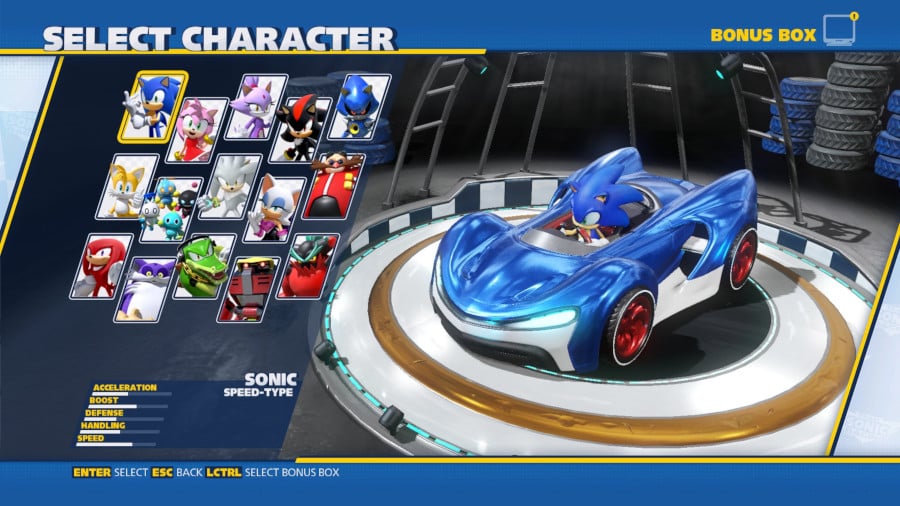 Team Sonic Racing has a grand total of fifteen characters, divided into five teams of three. This is disappointing, to say the least. The first All-Stars Racing game had 20 characters, excluding version exclusives and DLC, whilst Transformed had 25 under the same stipulation. The main reason for the comparatively small roster is the removal of non-Sonic characters from the roster, ultimately serving to create a more coherent Sonic title, rather than a less focused 'Sonic & Sega' game. This is a shame, as it excludes fan favourites like Billy Hatcher and NiGHTS, but given the context of the game, I can at least understand this decision. What isn't understandable however is why roster wasn't padded out with a more Sonic characters. To begin with, where is Cream? Team Rose is not comprised of the classic trio of Amy, Big, and Cream, but instead Amy, Big, and Chao. Another example is Team Vector, comprising of Blaze, Silver, and Vector. I honestly can't see why they wouldn't just make a separate Team Chaotix, and find someone to replace Vector in Blaze's team. It's confusing, to say the least.

Unfortunately, the online play leaves a lot to be desired. It only takes one look at the player count on SteamCharts to see why. In my experience, matchmaking takes far too long, and every race has AI characters to fill up the spots. In my first game I got disconnected part-way through, and even after finishing, it takes too long to actually get back into the lobby. As it stands, the online play is dreadful, and certainly limits the long-term appeal in the PC version, at least. 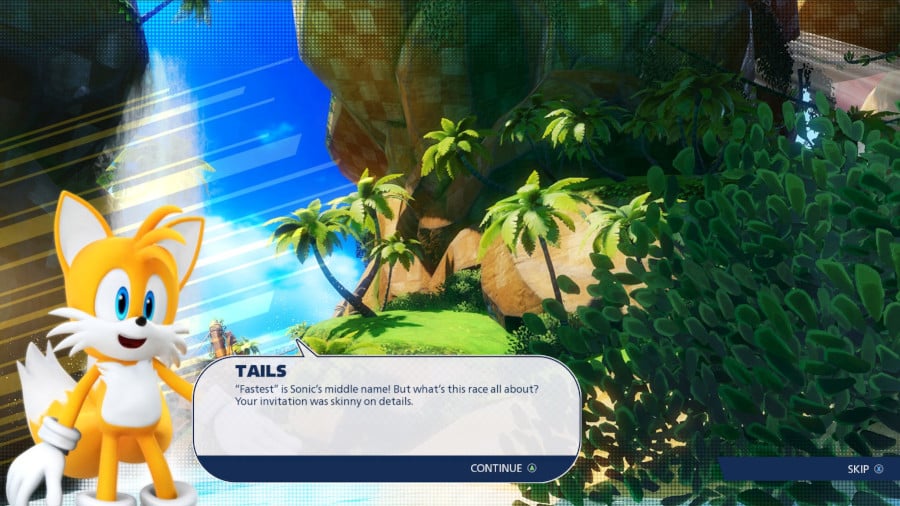 This is the first game in the 'series' to feature a story mode. The previous games had 'career' modes, but there was no story built around them. Dodon Pa, a mysterious tanuki has invited the game's cast to compete in a series of races. Everyone is sceptical of Pa's motivations, believing him to be allied with the evil Dr. Eggman. Dodon Pa is trying to create the 'ultimate engine', piquing the interest of Eggman, leading him to join the race, and to eventually kidnap Dodon Pa. The story is dull, and the cutscenes are a chore to watch, with the opening cinematic being the only semblance of fun. Some story events even appear multiple times, for some baffling reason. The gameplay is compelling on your first run, but I found little desire to go back and finish optional missions. This makes the terrible online even more of a problem, as there just isn't enough single-player content to satisfy the purchase. The developers have gone on record saying the story mode is one of the reasons they decided to focus on Sonic this time, rather than Sega characters. With the story being so inconsequential, though, I really don't think it was worth it. In fact, I think it would have been a lot more exciting had a few Sega characters showed up.

You are given the opportunity to customise your vehicle with both aesthetic and stat-changing mods. These are unlocked through buying 'Mod-Pods' with in-game currency, earned by winning races and completing missions in story mode. Now, I know what you're thinking—micro-transactions? Luckily, the currency is completely earned by doing tasks, and there's no need to throw extra cash around. Curiously, though, some characters seemed easier to get mods for than others. I had spent hundreds of coins in-game before I received an Amy mod, for example, but by this point I had almost every Shadow mod. I'm not 100% sure how this is decided, but the distribution doesn't seem balanced.

Graphically, it's a nice looking game. Sure, it's not going to win any awards, but it has a nice presentation befitting of a Sonic game. The tracks are all pretty, and the game runs smoothly too, even on a fairly modest GTX 1050Ti system. I do wish the built-in anti-aliasing was a little more effective though, as some of the edges can look jagged at times. One of the stand-outs of all Sonic games, though, is the music, and Team Sonic Racing does not disappoint. With many of the stages being built on ideas from previous Sonic titles, there's a ton of awesome remixes that not only tickle the nostalgia bone, but are also great in their own right. I also love the title song, sung by the returning Crush 40, bringing back the feel of previous Sonic titles such as Sonic Adventure 2.

Overall, Sonic Team Racing is a fun game with tragically bad online functionality. The story mode will keep you entertained for a few hours, but once you're finished with that, I see little reason to return to it unless you happen to have friends handy for co-op.