Single player
Local Multiplayer
Online Multiplayer
Co-operative
The developers of Gone Home have created another exploration-focused adventure. Are the desperate crew of the space station Tacoma interesting enough to create an engaging storyline?

In Tacoma, players will not find a thrilling, difficult, or lengthy gameplay experience. Instead, the game itself is its own reward. Every moment spent exploring the lives of the Tacoma crew leads to another satisfying piece of storyline advancement and character development. Tacoma masters the art of interactive storytelling by giving players control over how much information they are presented and when. Continuing the trend from their critically acclaimed title Gone Home, Fullbright proves that they can create an amazingly satisfying video game experience by subverting all traditional methods of storytelling and slowly developing a stellar cast of characters.

Tacoma is great at establishing atmosphere in more ways than one. From the opening shot of the vast cosmos, the title takes time to let players soak in their surroundings. Of course, one could choose to just blaze through the game in an hour and not do that at all; however, Tacoma presents itself so beautifully that it's impossible to resist. Very little information is fed directly to the player, encouraging liberal exploration without making it mandatory. Although built in the often abused Unity engine, the environments of Tacoma are beautiful enough to encourage long pauses to stare out of the ship's windows. All these well-executed techniques lead to an extremely solid platform on which to tell a story.

Speaking of story, Tacoma is set in the distant future of 2088, in which artificial intelligence and augmented reality have evolved to universal utilization. The Tacoma is an orbital space shuttle whose crew are contracted by the ominous Venturis Corporation. The player's role is that of another contractor, Amy Ferrier, sent to retrieve artificial intelligence data from the ship after an accident has occurred and the crew has disappeared. So much of this basic information and atmosphere is exposed not by direct communication, but by pure exploration. As the player enters the Tacoma, they are presented with an augmented reality device which makes all this information available on demand. The AR desktop displays messages from Venturis Corp., as well as some basic information such as the crew roster and Amy Ferrier's ID. However, none of this information is necessary to even pay attention to. Skipping all of this introduction is a viable option, which is part of why it's so remarkable that I found myself wanting to learn as much as I could. 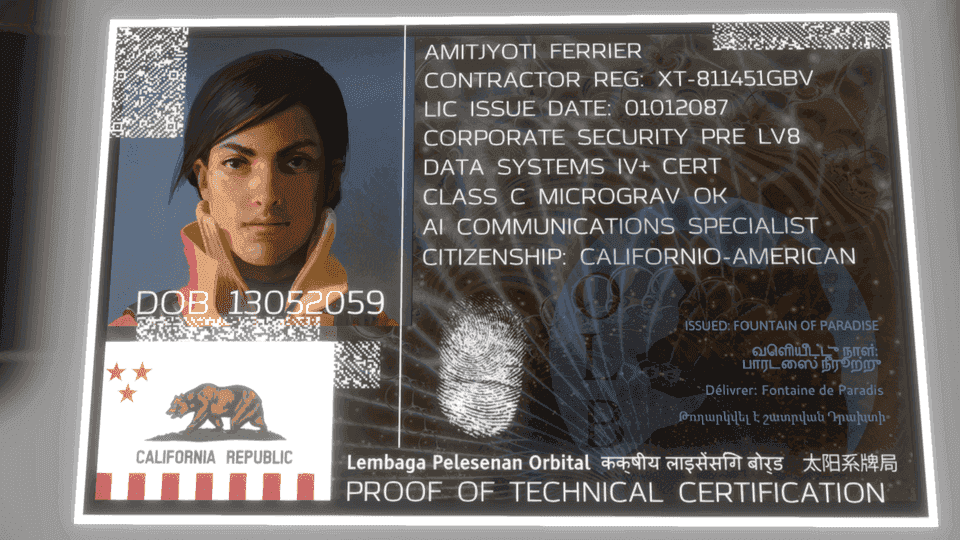 This AR device allows the player to retrieve certain moments of the crew's history. Players can rewind, pause, and fast-forward these moments at will. Different areas contain different tapes, and the player can walk around with the crew members and listen to their conversations. To get every piece of the story, players would rewind tapes to follow different characters to different places and get the full story. Occasionally, the AR desktop of a character is exposed, showing whatever private messages, internet pages, or notes that character had pulled up. Again, what makes this all so unique is that you can just skip all of it. As the player explores the ship, they are only forced to wait while data transfers are taking place at a terminal. This lightly encourages exploration, but you don't have to hear every conversation or check every desktop.

Despite the option to skip whatever I wanted, I found myself drawn to the world and the characters enough to want to find everything possible. Characters' personal quarters are filled with photos and other personal items. AR tapes are often found of the crew listening to their favorite songs or chatting with a friend back home while in their bunks. There is no greater feeling than reading something stuffed in a character's drawer that is subtly referenced in a future conversation. The reward for exploring these beautiful environments is simply knowledge and understanding of the personalities of these people. Of course, this all would indicate that the story ought to be pretty amazing if this system were to work. It definitely is. 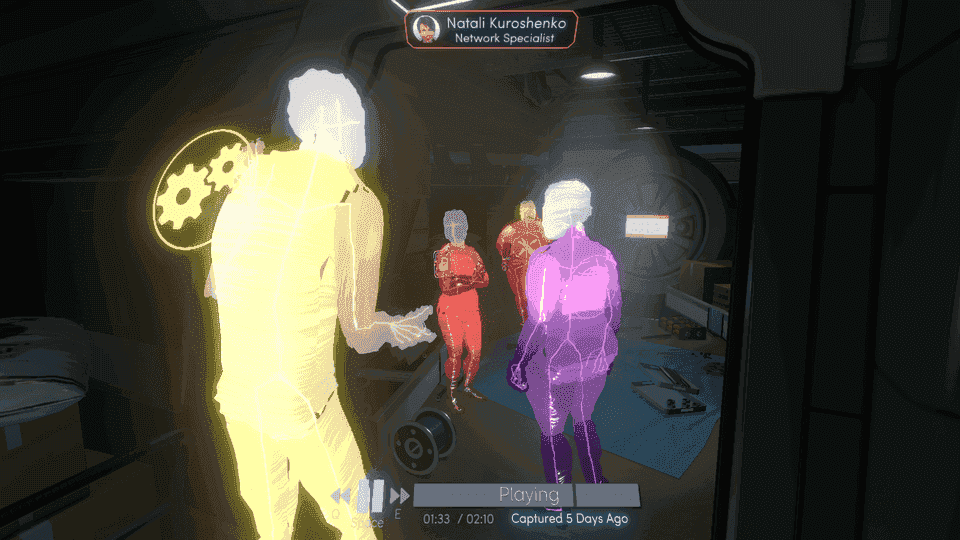 Tacoma's story is a sci-fi adventure that is simultaneously incredibly realistic. It deals with heavy issues like the evolution of artificial intelligence while focusing on a small cast of six crew members. Watching the characters react to the disastrous events folding around them is an amazing experience. Information can be found simultaneously about the Venturis Corporation, the evolution of ODIN, the ship's AI, and the personal lives and friends of these characters back home. Everything works so well within the story that it's impossible to describe without experiencing it personally.

One of my few criticisms surrounds the game's length. Fullbright clearly states as the game first loads that it is a two-to-five hour experience which can be played in as much detail as the player pleases. There's nothing to hide here; Tacoma is a very short game. I finished everything in about three hours, and I explored everything I thought was possible. The price of entry is perhaps a bit too high at $20, considering the length. However, I can't fault Tacoma too much here, since everything culminates in an absolutely fantastic and satisfying ending which could have perhaps have been hindered by a longer game. The game's amazing interweaving of story and atmosphere makes it worth the price despite the short length. 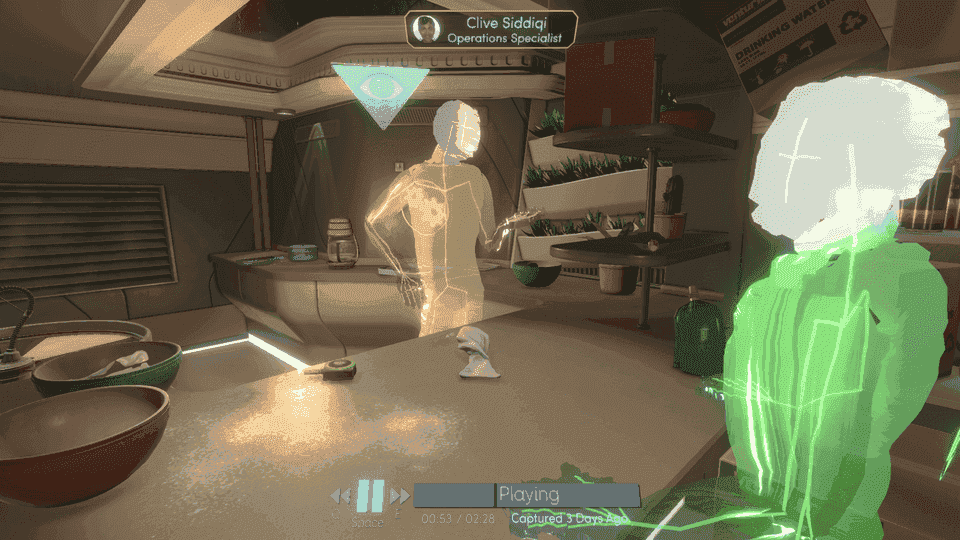 Tacoma's presentation is another one of the title's many high points. The environments are beautiful and absorbing, with tons of detail. Characters' rooms are littered with empty cups, wrappers, books, and photos, the volume depending on the character's personality. Every window contains a beautiful view of the ship's exterior and the stars and planets around it. The AR system is incredibly smart, making interaction feel natural in a matter of minutes. The voice acting is also superb, emphasized by some moments of fantastic music which enrich the experience even more. The different accents of the characters sound great, contrasting with the somber, serious tone of the ship's AI. The presentation here is absolutely stellar (no pun intended).

I can't help but feel Tacoma would work extremely well in VR. However, the game has no support for VR at all, and Fullbright currently has no plans to make that possible. I'm not a huge VR fan personally, but this is one of few titles where I think it would really enrich the experience, and it's a bit disappointing to see a total disregard for the technology which is used extensively in the game's storyline.

What We Liked ...
What We Didn't Like ...
9
Gameplay
Tacoma's unorthodox method of storytelling allows players to find out as little or as much as they want about the characters, fostering immersion and incentivizing exploration by incorporating interesting characters whose stories are their own reward.
10
Presentation
Fantastic voice acting combined with beautifully constructed environments make for an aesthetically pleasing experience beginning to end, with no interruptions or visual oddities.
6
Lasting Appeal
Tacoma is a very short game, and although its ending is extremely satisfying, there is little replay value except to find small bits of information missed in earlier playthroughs.
9
out of 10

Fullbright proves that they have mastered interactive storytelling by delivering a uniquely absorbing experience in Tacoma. Allowing players to explore as much or as little as they want perfectly complements the amazing cast of characters and beautiful environments. While it may be short, Tacoma is one of the most unique games I've played this year.
Reactions: Laroon, Deleted member 377734, TheVinAnator and 1 other person
Share:
Facebook Twitter Reddit Pinterest Tumblr WhatsApp Email Share Link
Wow, there sure is a lot of reviews popping up this week/month, did you all finish these games at the same time or something?
>The developers of Gone Home
And I've dropped reading the review there.
Reactions: Sirius64 and Deleted member 377734
I hope I one day get to play this. Pondering of sci fi concepts like this is a fairly easy way to catch my attention.


Reploid said:
>The developers of Gone Home
And I've dropped reading the review there.
Click to expand...

Care to elaborate there? If it was the suspect actions of some of the developers at a later date then fair enough, I am not sure what the previous game did so very wrong to dismiss their further works though.
Well Gone Home was barely a game imo I was going to call it a walking simulator, but it barely has any walking it's all reading.
Text adventures in the 80s had more gameplay than Gone Home.

This looks like an improvement but no rush to check it out.
As ever we can bust out the definitions, consider win states, any kind of useful statefulness, tests of skill... and by basically every measure of that I know I agree Gone Home is probably not a game. In spite of that though I quite like urban exploration, creating profiles of people and places, investigations, and when I play things like Penumbra, Amnesia and such, even GTA to an extent, it is the exploration of a lived in world that I really like.
Reactions: Issac and T-hug
Not interested... looks like waste of time.
I liked Gone Home. Walking simulator or not, reading simulator... whatever. I look at games like those as a novella, or even a short story / prose. It's an experience plain and simple.
This game looks interesting, I'm sure it will show up in a bundle sooner or later... or if I can grab it for spare change in a steam sale... not in any rush to play it.
Reactions: endoverend