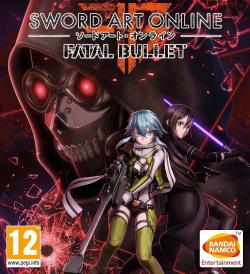 Time for some more Sword Art Online action, this time in Gun Gale Online. Let's see how this third-person shooter from Dimps stands up to the rest of the SAO titles!

Sword Art Online: Fatal bullet is the latest game to be made for the series, and is (thankfully) made by a different developer than usual. Dimps manned the helm for this one, and it was immediately obvious when compared to the previous titles. Set in the VRMMORPG of Gun Gale Online, players create their own avatar and immerse themselves into a story heavily involving the typical Sword Art Online main characters. While of course, shooting a whole lot of guns.

The first thing that's a noticeable improvement upon past entries is the translation. Which typically involved a whole lot more penetration than may have been necessary…

Sword Art Online: Fatal Bullet, however, has a very solid translation and localization. I’m not a huge fanboy of the series by any means, but I do have a grasp of what most of the characters are like. They all seem to have been written properly and appropriately. In the many hours I played, I didn’t notice any typos or awkward phrasing. Though I will say, holy crap, there is a lot of dialogue in this game. I love me a good story in games, but it just goes on and on. If you’re a fan of the series I can see this being lovely. More time listening to your favorite characters, more immersing yourself into every inch of the world. But for me, I was just glad that you can skip every single piece of text. Being so dialogue-heavy would actually be a negative for me, if it wasn’t easily possible to just skip past it when you want some action.

Graphically, I wasn’t exactly blown away, but I wasn’t really appalled either. There are a lot of nice aesthetics, especially the character models and costumes--but a lot of the scenery, and especially the combat zones, could be a bit barren and/or ugly in places.  I never spent any time in awe of how beautiful my surroundings were, but I was also too busy, y’know, murdering things. The character creator was pretty fun to play with. You can make a pretty cool or cute looking character without much fuss. Sufficient sliders to be happy with, without going too overboard either. In general I’d say the graphics did their job, and not much else. 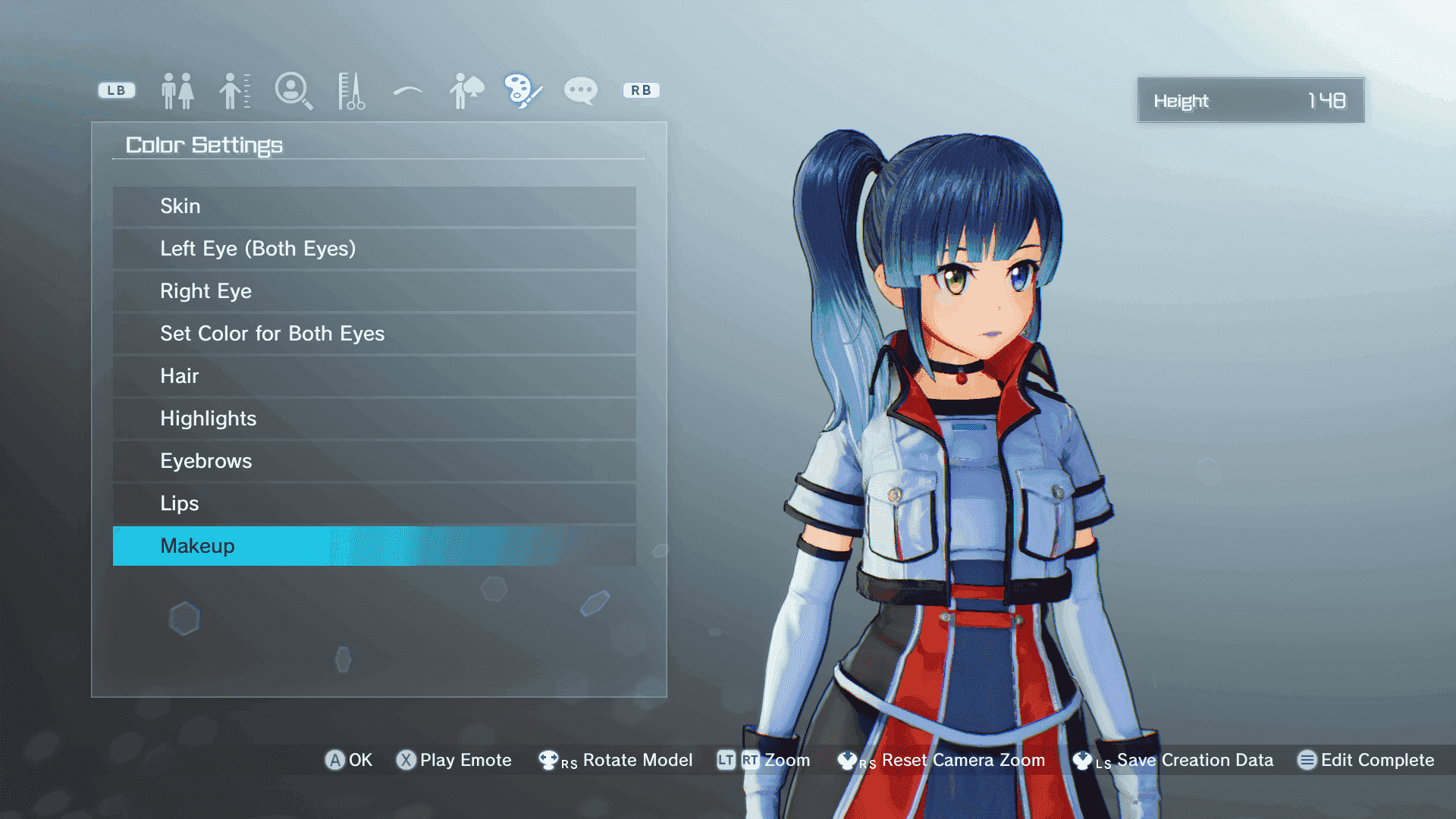 Now for some pew pew

Now, the real meat of the game is of course the gameplay. As a third-person shooter it had a pretty interesting system for aiming. While firing from the hip, by default your gun with lock on to an enemy as long as you were aiming even in the ballpark of them, but the reticle is quite large so you don’t land a whole lot of shots until you manually aim properly. This feature can be completely disabled, and your hipfire reticle will actually be reduced (becoming more accurate) to compensate. Aiming down sights is, of course, the most accurate way to fire the gun. It’s a pretty simplistic change, but it’s a damn good one. In the heat of the moment, it felt great to just hold down the trigger and at least get some damage out, while focusing on other things. It’s very intuitive without trivializing the difficulty.

Gunplay feels quite solid. I had no real complaints while playing, primarily using a sniper rifle and assault rifle since you can equip two different guns. Sniper rifles have a bit of sway that needs to be compensated for, and I believe it’s possible to reduce as you progress. Otherwise there are a good variety of weapons to accommodate different playstyles. SMGs and pistols do quite well hip-firing, while assault rifles and snipers require aiming down the sights. There’s also other weapons like shotguns, rocket/grenade launchers, and swords. There are 9 categories in total, and different varieties of weapons further within those. 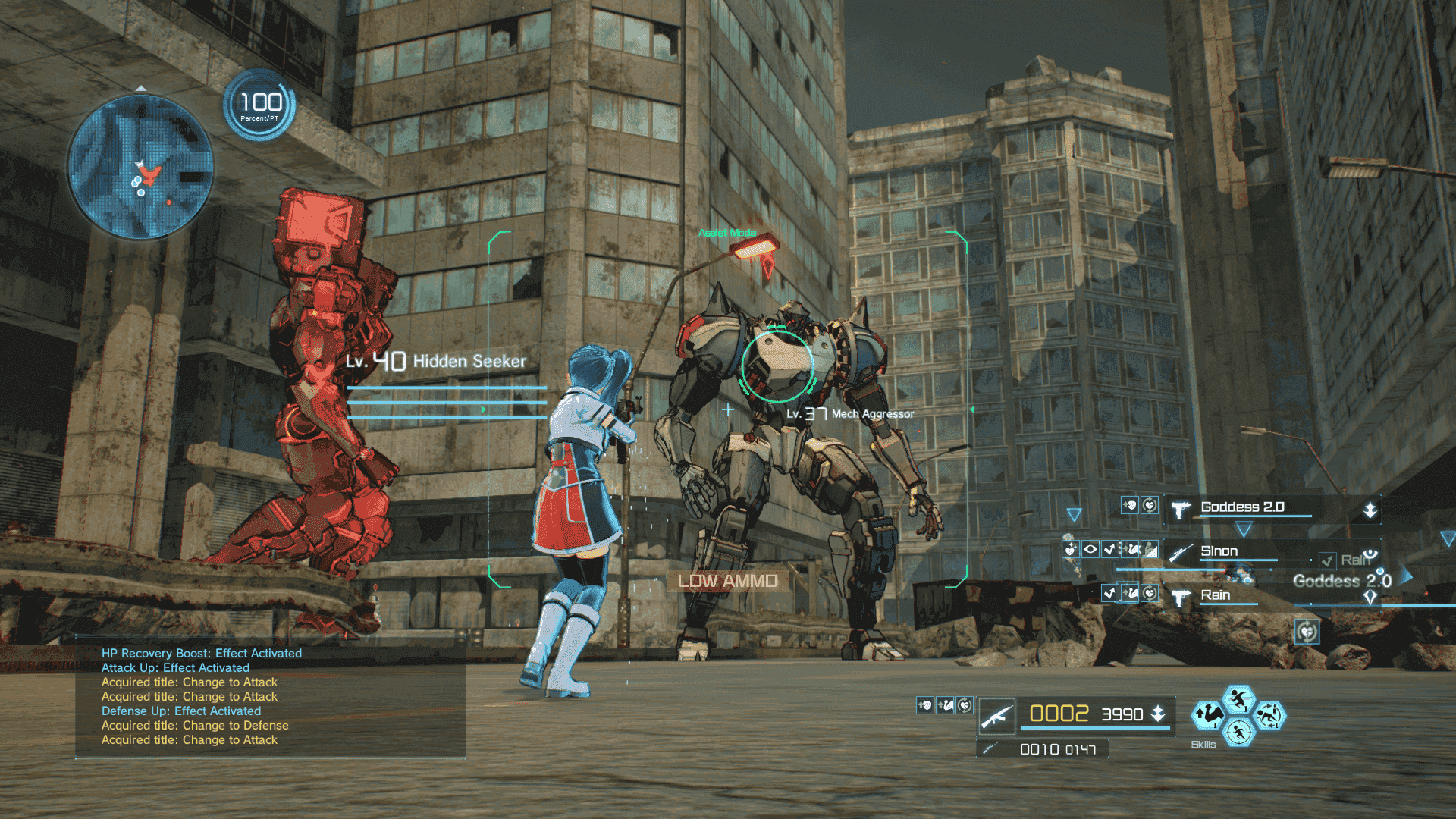 As this is an RPG, you can also level up and gain stat points to allocate and further customize your character, as well as skills to unlock that can be assigned to each weapon type. Overall there’s a really good amount of things to really diversify yourself and play how you want to. I was quite impressed with the level of character customization, something most games disappoint me with. It’s also worth noting you can upgrade weapons and transfer skills from one to another. There’s a ton of them, so creating the perfect weapon through merging is a crazy task...but also pretty fun.

The game really shines if you can play with friends, each taking on different roles in the party. Unfortunately I never got to play with anyone, but it was immediately obvious when dealing with the derpy AI, just how fun it could be with friends. You can control the AI fairly well if you micromanage them, but when left alone they can be exceedingly unreliable. Not really a huge deal but it does mean you do a whole lot more work on missions. 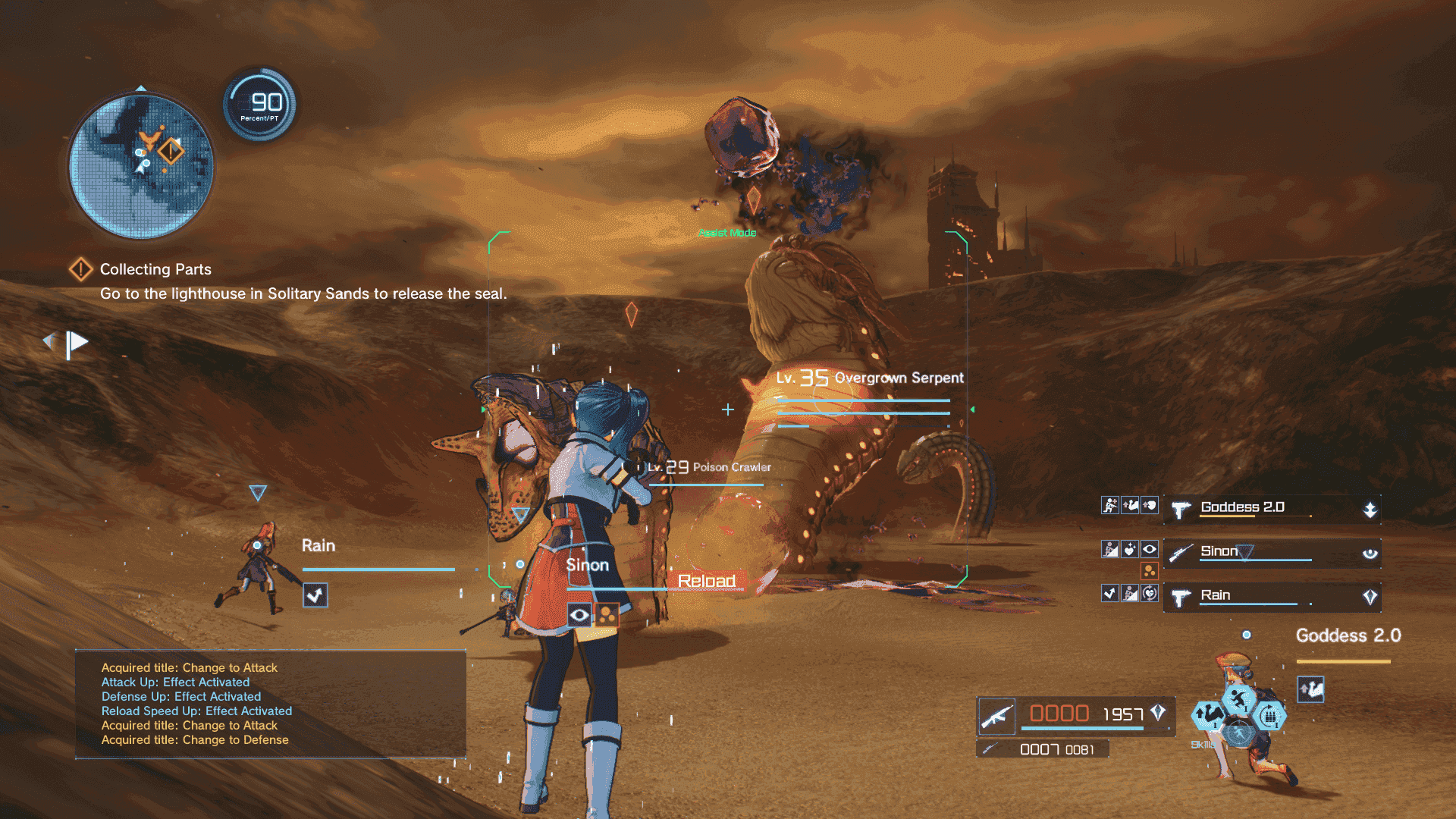 There are several zones, each littered with their own dungeons complete with a boss. Every zone is also sprinkled with all sorts of fun bosses to run into and fight. Typical enemy variety is a bit lacking but there are certainly enough to keep things interesting. Bosses are definitely where the games combat shines, as they can be very fun to take down. Especially as the game progresses.

PvP in this game is also pretty interesting. There are two modes, though identical in objective, where you play either as your own avatar, or an iconic character. I decided to try out the heroes because they were much higher levels with pre-built kits. I’m not sure who I chose, but she dual wielded grenade launchers and she was an absolute blast to play, despite my teammate being utterly useless. The goal is pretty unique; two teams fight to do more damage to a boss that is actively trying to slaughter both teams. Of course, while doing this you’re also fighting each other. I can’t say i’ve ever seen anything like this before and it was really fun to participate it. Being able to choose heroes is a really cool way of letting characters try out different play styles easily. 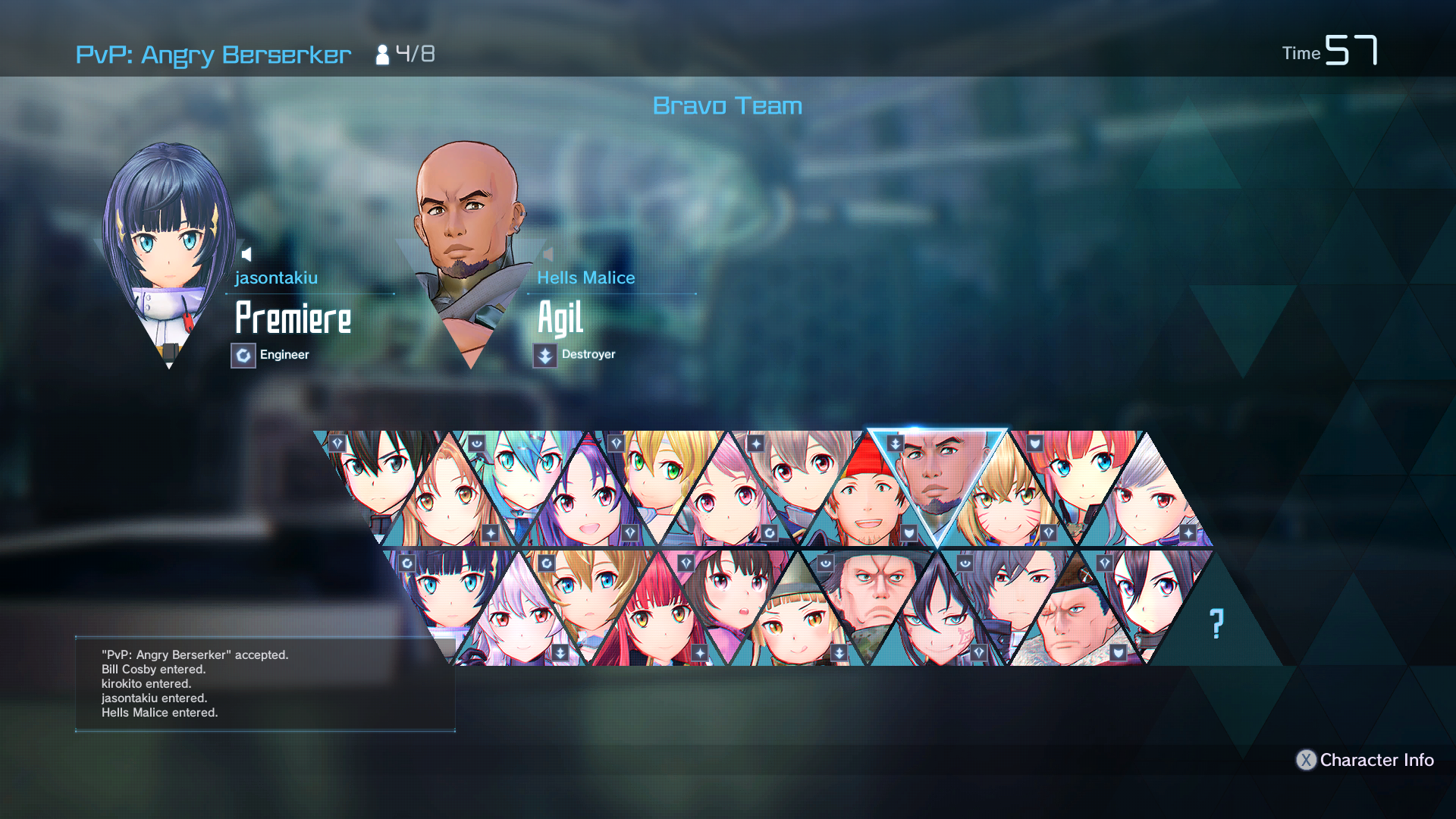 Voice acting during story bits seemed solid, it’s sadly not dubbed though. Unfortunately, the voices while you’re on the field are absolutely infuriating. Holy crap. It’s just nonstop anime girls screaming and yelling. It drove me nuts. Luckily you can turn the voice volume down or off, but I do believe the voice slider affects both story AND field voices. It’s probably worse because they’re Japanese voices and I have no idea what they’re yelling. Perhaps it’s useful if do understand...but otherwise it was just grating. Music was nothing overly memorable, but it fit the mood and locations. I will admit I didn’t get to appreciate it for many hours however, because I hadn’t realized to turn off the screeching voices on the field and that’s all you can hear for the rest of your life.

Overall I was pleasantly surprised by Sword Art Online: Fatal Bullet. Going into it, I expected something similar to the previous games, and luckily that wasn’t the case. Gameplay is quite solid, with some good gunplay and a fun little grapple thingy to mess around with. Tons of character and weapon customization opportunities to build your perfect character. Not to mention a pretty great character creator to make your ideal waifu with. Just don’t accidentally make your ArFA look exactly like yourself like I did. I’m sure fans of the series will enjoy the very dialogue-heavy story, and those of you who just want action will enjoy the skip button. There’s plenty to do, explore, collect and murder.

Verdict
You, gnmmarechal, ThoD and 8 others like this.
Unlike this review