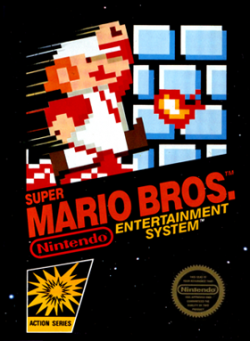 Good
Hello, I'm Stealphie and this time i'm reviewing one of the most iconic video games in gaming history. Super Mario Bros. for the NES!

Are the levels well designed? No. (mostly)
Is this game fun? Kinda, if you just play it for like, 5 minutes it's definitely fun, buf after that it just gets kinda boring.
Is the multiplayer good? No. The second player will only play when the first player die, and vice-versa.
Does it control well? Yeah, it feels decent to run' n jump but the the thing below makes it feel worse.
Are the physics good? No. They just feel off, it's hard to explain why but they feel off and makes controlling the game less fun.
Is there a reason to come back to this game after beating it? No, there is literally nothing to do after beating this game.
This game is available for: Nintendo Entertainment System, Super Nintendo (Super Mario All-Stars), Gameboy Color (Super Mario Bros. Deluxe), Gameboy Advance (Classic NES: Super Mario Bros.), Wii (Virtual Console), 3DS (Virtual Console), WiiU ( Virtual Console), Switch (Nes Online).