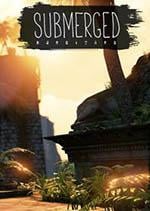 Submerged is a third person exploration game that follows the story of Miku and her wounded little brother, Taku, drifting along a seemingly endless sea when they come across a city that is flooded. As you land on what appears to be a cathedral, you must get to work searching the flooded city to find any help you can to help heal your brother.

What is this, Waterworld?

Yes. Yes it is. Submerged starts out with your main character and her little brother drifting alone at sea in a small boat towards a cluster of tall structures. As you get closer, you realize *gasp!* it's a city, and it's...it's submerged. In water. Didn't see that coming. As you land on some random building and set your brother on a stone bench, the main character, Miku, decides she needs to find supplies to help her wounded brother. She observes her surroundings, discovers a shredded up parachute on top of a building, and then you're off to explore and find supply caches. Fun!

Except it's not really all that fun. Submerged looks pretty good for an indie game, and it even starts out at least somewhat interesting as you boat around the city...but that's about the extent of what you can really do in the game. You search around for pictograph journals and "boat upgrades" (read: Just more turbo) thrown about the map, you search for buildings with supply caches you must climb and that's it. That's the game. And even worse? You can't lose. There's literally no "wrong" way to play this game, besides maybe not playing the game. You can't die, there are no enemies, you can lose your balance while walking across a skinny plank. There's no punishment for messing up, because you can't mess up. There's no rewarding feeling for finishing a "puzzle" (read: climbing a tower), because there's no challenge.

The only saving grace in all of Submerged is the story, and even that ends up being as bare and lackluster as the game. There are 60 journals scattered throughout the world that tells the story of how the city became flooded, along with 44 other pictographs that tells the generic story of how the main character's little brother came to be wounded. Long story short, your mom died, your dad becomes a drunk, accidents happen, and off you go with your brother to do things. As to how the world became flooded? I honestly couldn't tell you. There are also some messed up humanoid creatures that you can spot throughout the game, but those aren't really explained with pictographs, and the most you know about them is that Miku is sort of becoming one? I really don't know, there's not enough context for anything solid in terms of how the game's story pans out.

Controlling your boat is great, not because it's easy to control or because it controls well, but because for some reason (with keyboard controls, anyways) the sensitivity for turning is turned up to 99. While going through Submerged, you can almost accidentally do donuts while trying to reach the next building you want to climb. Controls while running are the opposite, they go from floaty boat controls to rather stiff running. This, of course, isn't much of an issue since you literally cannot lose the game and the differing controls have no downside, but it gets annoying when you accidentally undershoot a ladder or something because you're used to ending up a bit farther with less input. Climbing controls are exactly what you'd expect them to be, and aren't really all that special despite being most of the game.

The atmosphere and the setting, unfortunately, suffers from the same fate as the gameplay does. Everywhere looks the same, you'll always find the same 3 random fish that plop out of the water every now and again, you'll always find buildings that look exactly the same as others, you'll always find the same climbing puzzles. Hell, I'm almost entirely certain that's only one or two songs in the entire Submerged OST, because I honestly can't remember hearing more than one. It's not fun, it's not interesting, it's just...boring. And that really sums up everything about Submerged. The entirety of it's being is just...boring. It's a game an accountant who loves his job would play. It's a game you'd play if you really didn't want to have fun. And that's all Submerged is.