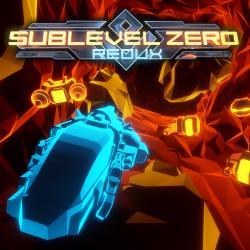 Strap in for a stimulating low-gravity roguelike set on a barren facility in the midst of space!

When it comes to roguelikes, I think of The Binding of Issac. I think of simple to grasp gameplay with fun random elements to keep the experience fresh, and I think of something I can keep coming back to in an addicting way. Sublevel Zero Redux is a roguelike similar to no other I've played before, carrying the lifeblood of the genre in a bizarrely gripping manner I'm yet to master but can appreciate all the same. 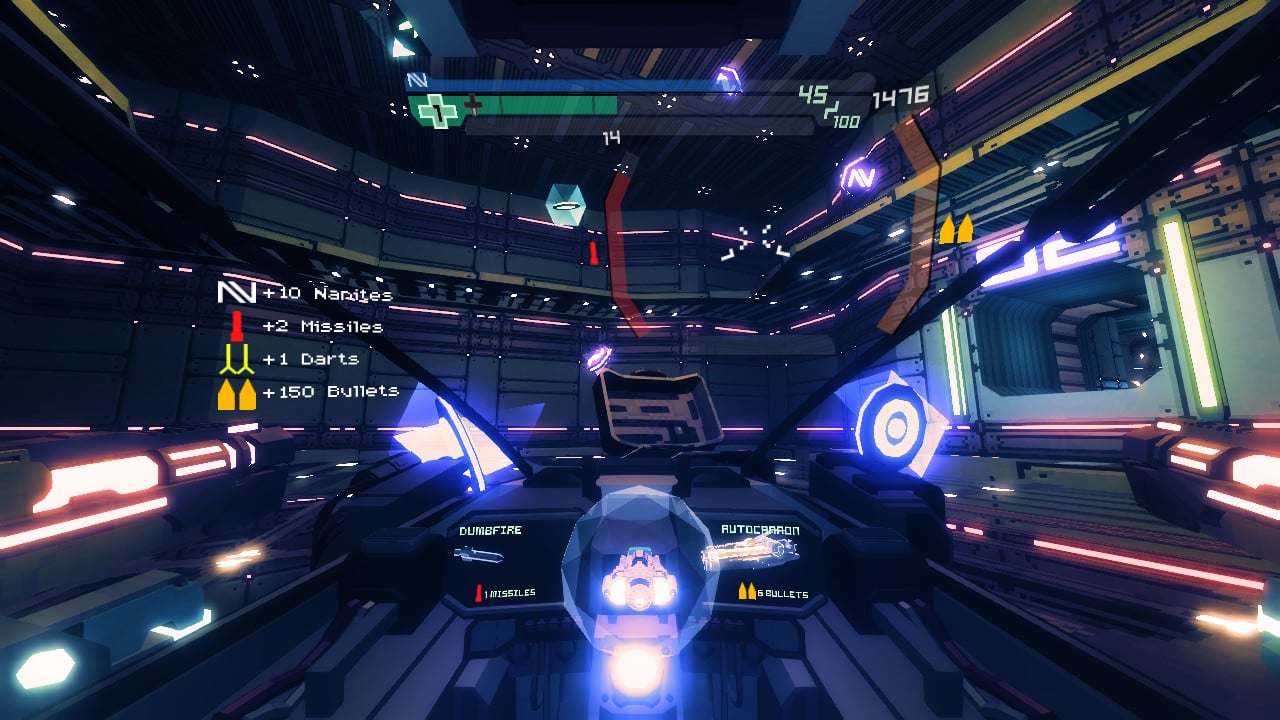 Starting the game for the first time, you're shown the ropes with some in-game tutorials. Instead of having walls of text to read, you're given a small area to travel through, requiring you follow small directions to gradually build up your catalogue of movement and combat options. As soon as you start moving around, you know this game is different. Gone are the tight and responsive controls of Isaac and co, in its place the floaty cockpit of a ship in a full 360 degree experience. If nothing else, you feel an instant focus on just how fun it is to be moving through tight corridors leading to rooms both open and complex, some hiding enemies, others hiding rewards, traps, or just more places to explore. The acceleration can be a little hard to control at first, but ultimately does well in assuring you never feel too cornered in a tight situation.

Investigating an abandoned facility rumoured to be at the root of the universe's demise, you find yourself stranded, with the only means of getting home lying in the hopes you can scavenge the technology lurking within. Of course, this isn't without its risks, the automated defences kicking in and giving you a fight whenever you come into its sights. These defences take many forms as you progress through the facility. Starting with slow drones firing slow shots at you, they advance to launching missiles, faster shots, having periodic shielding, and a whole range of different challenges. These defences encourage slow and methodical observation to analyse each threat and proceed accordingly, but the beauty of this kind of game is that such a strategy is entirely at the player's discretion. If you want to speed past enemies in search of a chest, you're free to. The game rewards knowledge however. If you can recognise an enemy, you can work around its limitations. If you know the components for a strong weapon, you can optimally seek out and manage inventory space to create it. Perhaps more interesting is a player's lack of knowledge however, creating a sense of immersion and empathy with the pilot as they explore this bountiful unknown. 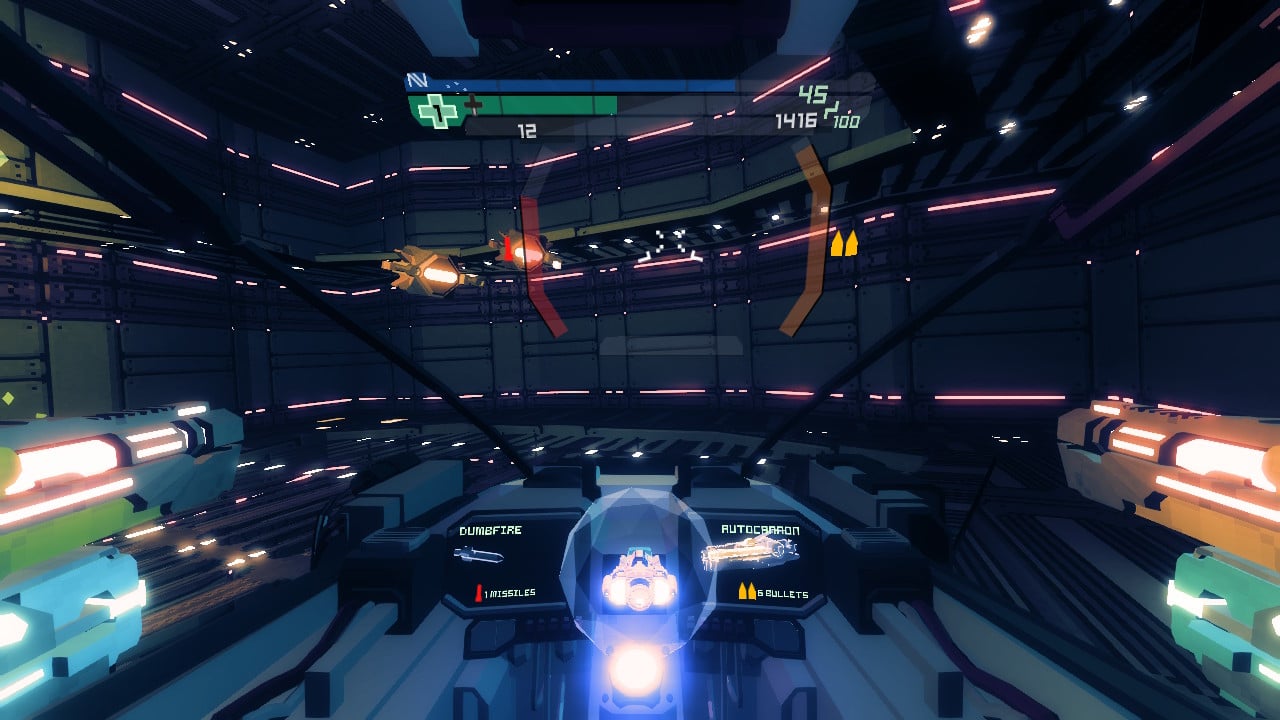 Item collecting and crafting took some time to get used to. You can collect items by defeating enemies, opening chests, and just by finding them lying around. You pick them up, managing a limited inventory space, equipping weapons you want to fight with, and storing others you may want to use for crafting later. It's here in particular I found my lack of game knowledge daunting; everything seems useful in some way. Picking and choosing what I should keep became a stressful ordeal to the point of me downright rejecting anything once my inventory became full. As somebody used to a simpler 'pick this up and gain its attribute' kind of system, I feel no shame in saying this left me out of my depths to a certain degree. These kinds of games are a learning experience in and of themselves as you come to terms with optimal combinations and strategies, but with Sublevel Zero, I struggled to get a defined feeling of what was strong. With so much happening on-screen at once, I saw enemies fall, but rarely found the time to take notes or keep track of how quickly they did with one weapon against another. You're given some stats to work with in the inventory screen, things like rate, damage, and accuracy, but the whole thing never quite clicked with me. It wasn't helped by the fact there is far too little visual feedback in the menus. Take the image below as an example—would you know the cursor is currently on the crafting tab if I didn't tell you? 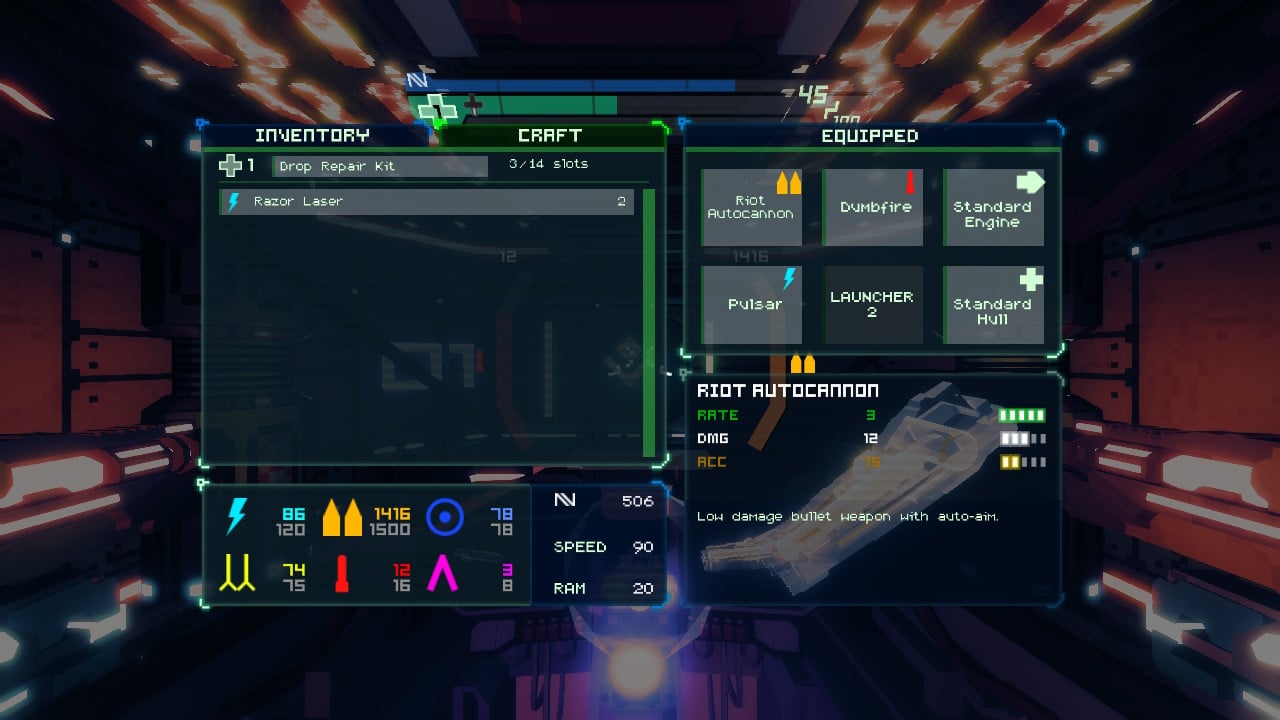 Outside of the menus, you'll find the game's stylistic choices as a whole at times muddying your vision. You often have corridors and rooms illuminated by vivid lighting. It looks fantastic and drives home a brilliantly futuristic and curious setting, but with the side effect of it making enemies less clearly visible in front of you. With them being distinguishable by their coloured lighting and shape, I found myself too often only noticing their presence as I took damage from their equally-luminescent lasers and missiles. The good thing about these as issues is the fact they'll gradually fade away as you adjust to the game and its stylistic choices, but the initial adjustment period can be a challenging one, especially on the smaller handheld screen.

Despite the lack of clarity in places, one element I can't help but commend is the map. In a game so rooted in the idea of manoeuvring in every which direction of 3D space, it's easy to get lost in your turns and rotations; the map remedies any potential to this flawlessly. Showing where you are, the rooms you've come through, as well as colour-coded doors to represent those you're currently able to open amongst other things, you can always find your way. It's a small detail, but it's one that goes a long way in making the experience as seamless as it attempts to be. 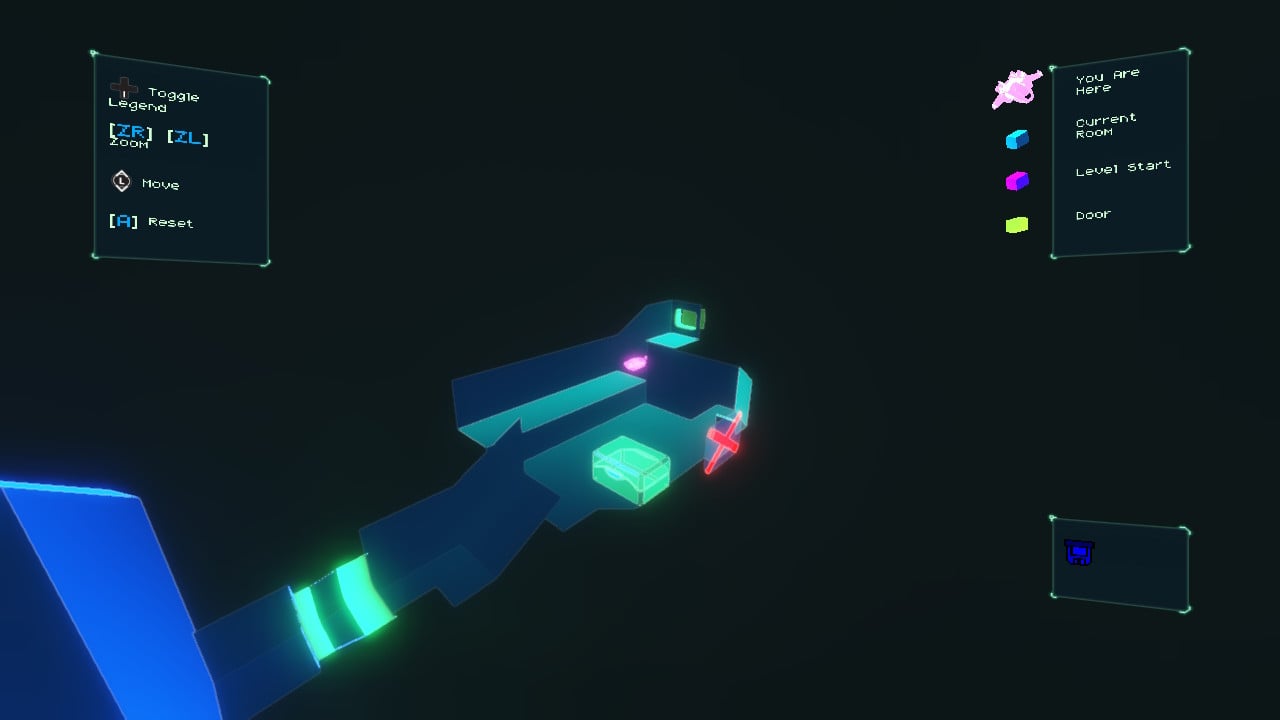 It looks far more disorienting than it actually is.

With this game available on PS4, Xbox One, and PC, you may be left wondering exactly what the Switch version brings to the table in terms of exclusive offerings. The major pull, as with most Switch games, is going to be the portability and overall versatility of the system, but more interesting to the gameplay is this version's motion controls. Though they're quite difficult to implement in a way as to please everybody, this optional feature is something that stuck with me. Instead of attempting to create a system to move the camera in its entirety along all three axis, it's easier to think of your motions steering the guns, adjusting the view a little to show you where they're facing. The majority of the control still lies in the right analogue stick where it rightly belongs, but these fine adjustments make it easier to get in quick and precise shots as you're charging towards or fleeing from enemies. It's a nice and well-implemented addition that genuinely brings something to the overall experience, and one I recommend at least trying for people intent on picking the game up.

All in all, Sublevel Zero Redux is a fine roguelike. Preserving the core ideals of the genre, along with some unique ideas and a divine control scheme I wish were in some kind of free flight game, you have something that can keep you hooked from start to end. The beauty of these games of course, is that the end never truly has to come.