Stray begins with a group of stray cats doing cat things - playing with each other, napping and clambering pipes - when one of them, yes the ginger one, stumbles on a rusty pipe and falls down to… an underground, walled city populated by friendly, sentient robots known as Companions. What a pickle! Surely, there must be a way back to the surface and maybe the metallic inhabitants of the city could be of assistance? Only one way to find out: cat your way out!

While Stray’s premise remains simple - get the cat back to the surface - the setting is intriguing; hinting that there’s more than what meets the eye. Despite the feline protagonist ending up in a place devoid of organic life (save for the Zurks - more about them in a bit), the underground city is brimming with activity. The Companions have established a thriving community of their own, and have taken roles like musicians, tailors and shopkeepers as they tend to outlets such as bars, laundromats and even clothing stores. These settings are further brought to life by the intricate details littered across each scene. 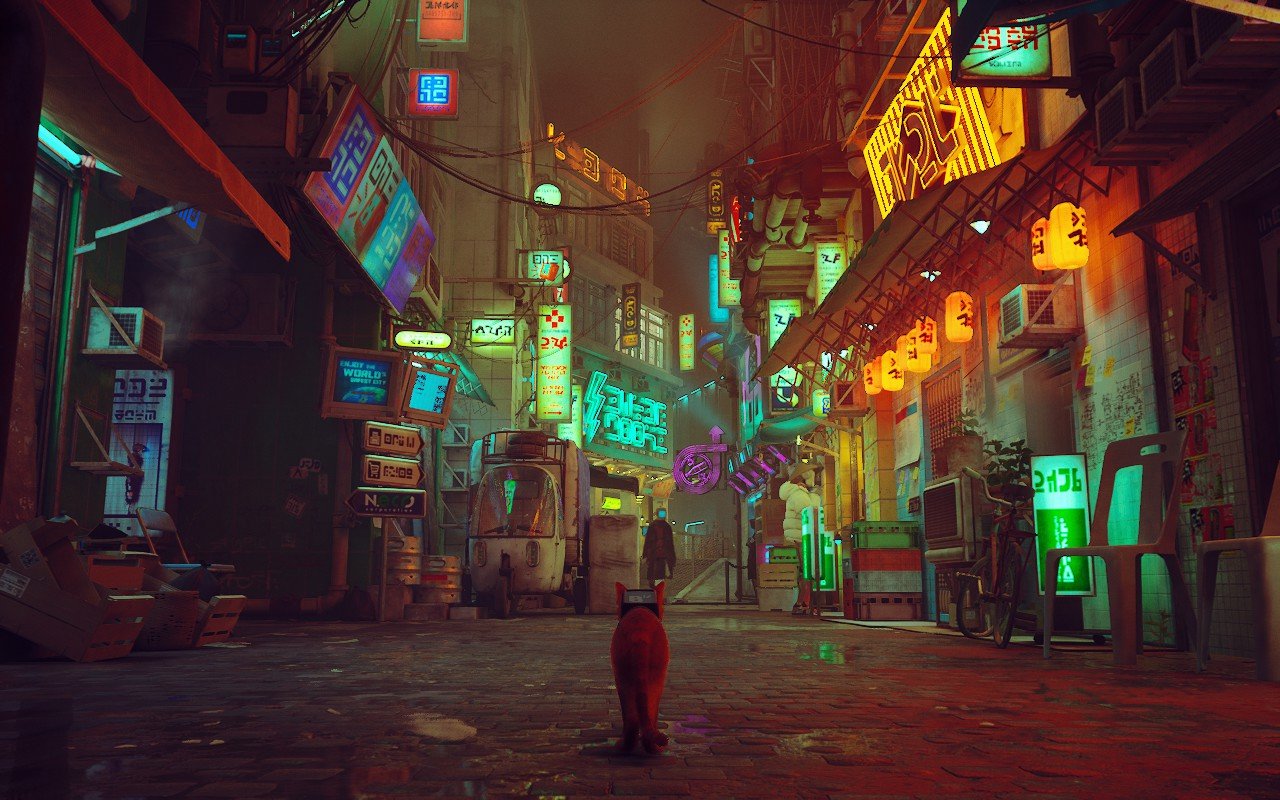 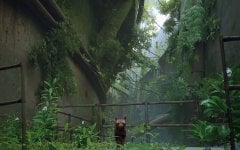 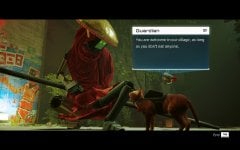 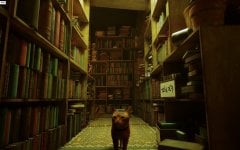 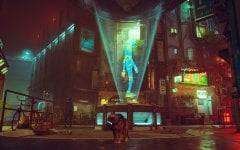 Getting around the cityscape as an agile cat is fairly fluid but as you don’t play as a mutated or hyper intelligent quadruped, you’ll eventually need to communicate with the Companions. Luckily, early on you team up with B-12, an AI that follows you on a drone and houses itself in your backpack (catpack?). The latter helps translate robot-speak as well as provides technical assistance for tasks such as hacking doors. As you undertake missions on your quest back to the surface, you get to learn how the city’s structures and robots came to be and might just end up helping those Companions, and B-12, along the way.

Progressing across said cityscape revolves around platforming and light puzzles. Heights, pipes and breached fences are your friends and are often the avenues you’ll have to consider in order to get from one place to another. While you can perform tasks in an open-ended fashion, progress is linear but the gripping design of the levels, that makes movement feel fluid and natural, overhaul the experience.

For the most part, Stray is a chilled game, tasking you with light puzzles and quests from Companions who will in turn lend our ginger-furred protagonist a hand. You’ll encounter original, cat-centric ways to complete assignments like startling paint bucket-hurling robots by meowing, scratching a door for the occupant to open it for you to slide past, roll in a hollow barrel to access higher areas or travel across distances in a bucket. These scenes and the way they are executed are not only original but also adorable. 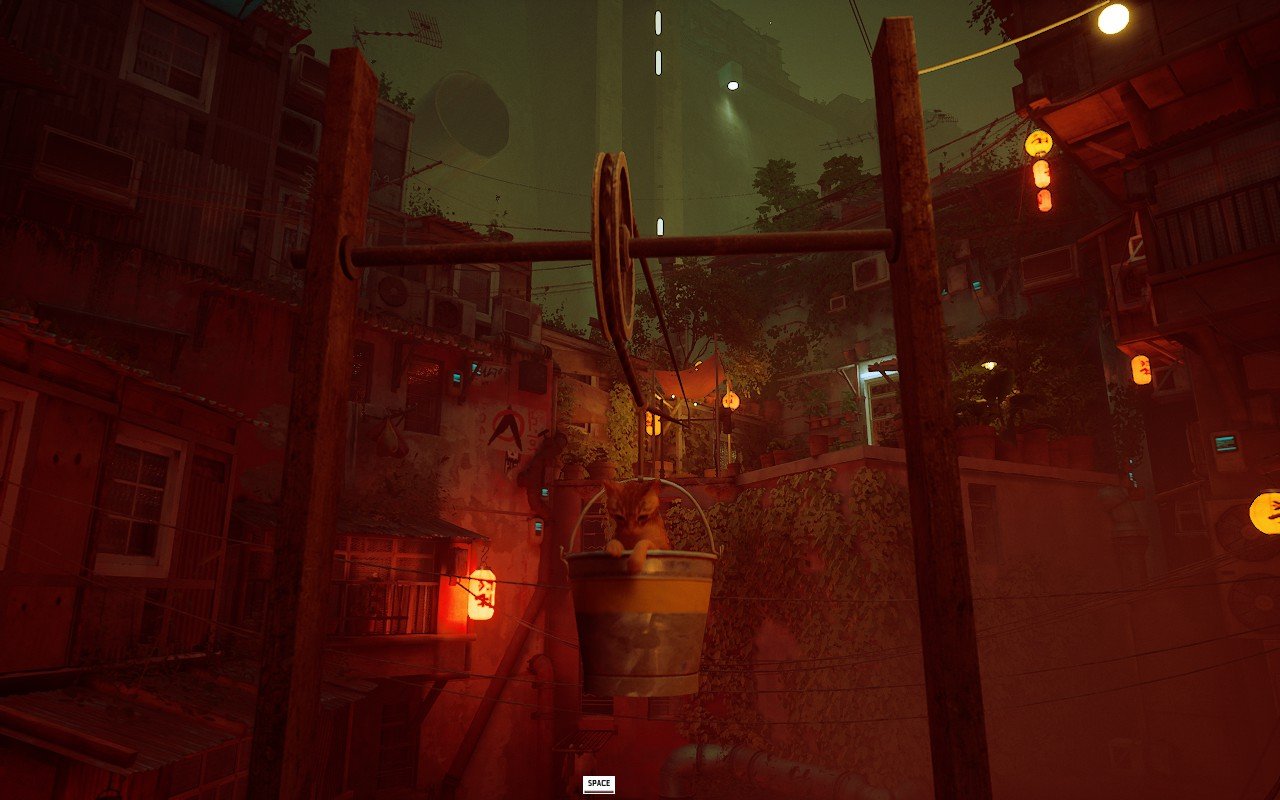 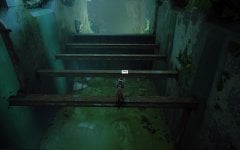 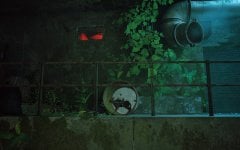 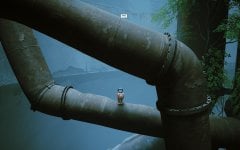 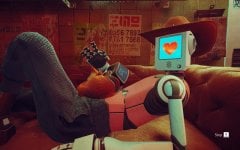 Occasionally though, the tempo kicks into a higher gear, in particular when you encounter the antagonists Zurk, which are bug-like creatures that follow the cat and latch to it, and Sentinels, the killer drones. Encounters with Zurks as a helpless cat means your only way to survive is to run and evade them, turning the gameplay somewhat akin to a (momentary) endless runner. Later on during the game, you’ll be equipped with the Defluxor which can terminate Zurks before the device overheats and this brings a fresh and welcome addition to the mechanics. Countering the patrols of the Sentinels often require a stealth approach and careful examination of your surroundings and, sometimes, meowing to attract them to a particular spot before locking them behind a door. Such mechanics that make use of the cat’s agility and limited abilities feel fresh and fun to engage with.

Nevertheless, there is not much challenge even in the more challenging sections. You’ll easily learn to outrun Zurks and grapple with the patterns that Sentinels follow. Moreover, Zurks and Sentinels are the only types of enemies you’ll come across and adding some more enemies could have upped the challenge while varying encounters. Puzzles are also not hard to figure out and, as this is no RPG but rather a platformer, you can’t level up your cat with new abilities that vary the gameplay.

Combining these aspects with the straightforward progress, Stray ends up being a rather short game, taking around 6 hours to complete the main quest line and some side quests. Even if the short duration might be divisive, I found it to be quite appropriate as this allows the game to feel focused, polished and well executed overall. 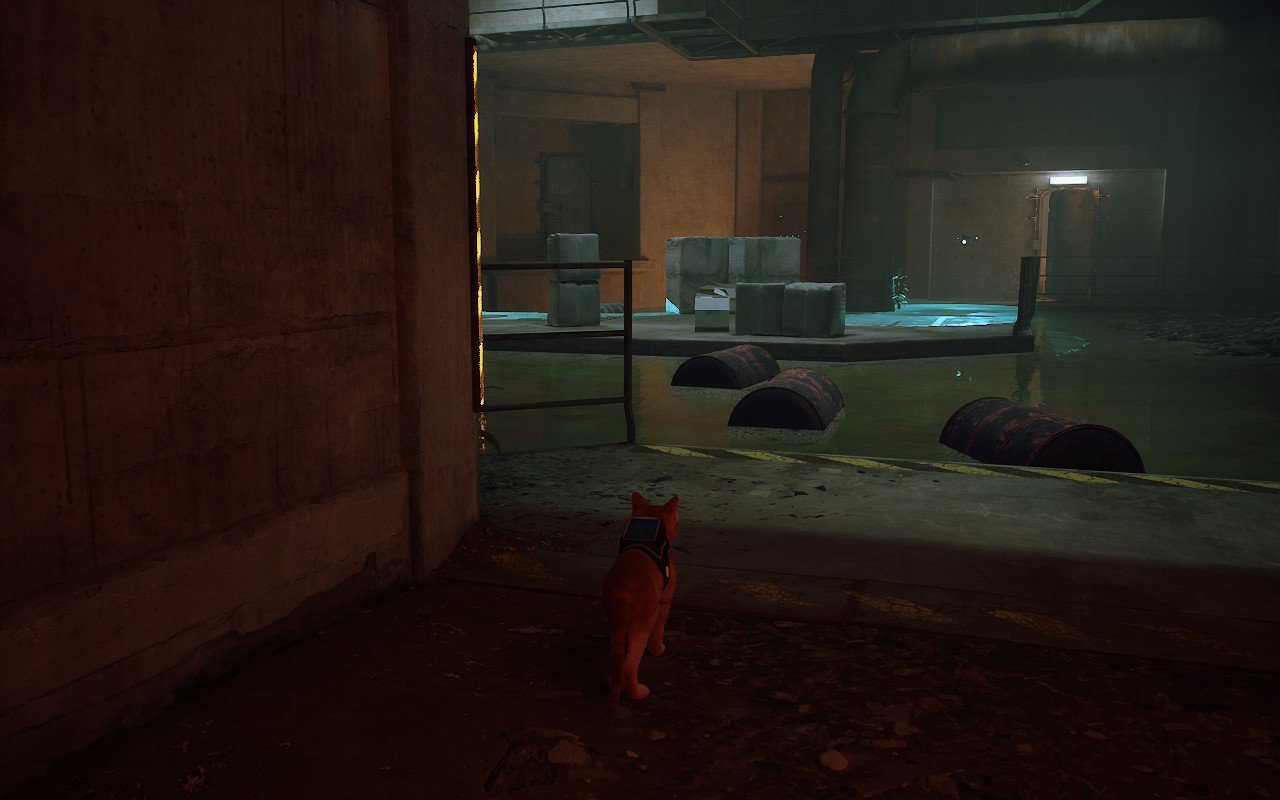 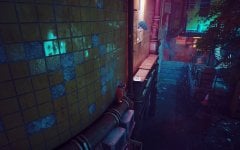 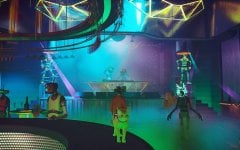 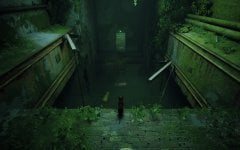 That said, there are some downsides to note. Despite being able to do cat stuff as a cat protagonist - scratch furniture and doors, take a nap, brush past the feet of Companions, purposefully drop items from a height - you cannot jump on command. Instead, you will need to find the prompt to do so and execute the command accordingly. While I didn’t mind this mechanic, it sometimes means that you’ll need to fiddle with the camera view to find the prompt in question.

In addition, while there is a focus on minimalism on the gameplay aspect with limited controls and prompts and even a silent protagonist to boot, a map might have been a handy inclusion. At some points in the game, you’ll have to head to specific locations and even backtrack. Orienting yourself as a small cat in a relatively large city can be mildly confusing but you’ll eventually get a grasp of your surroundings, although a map beamed by B-12 might have been handy. 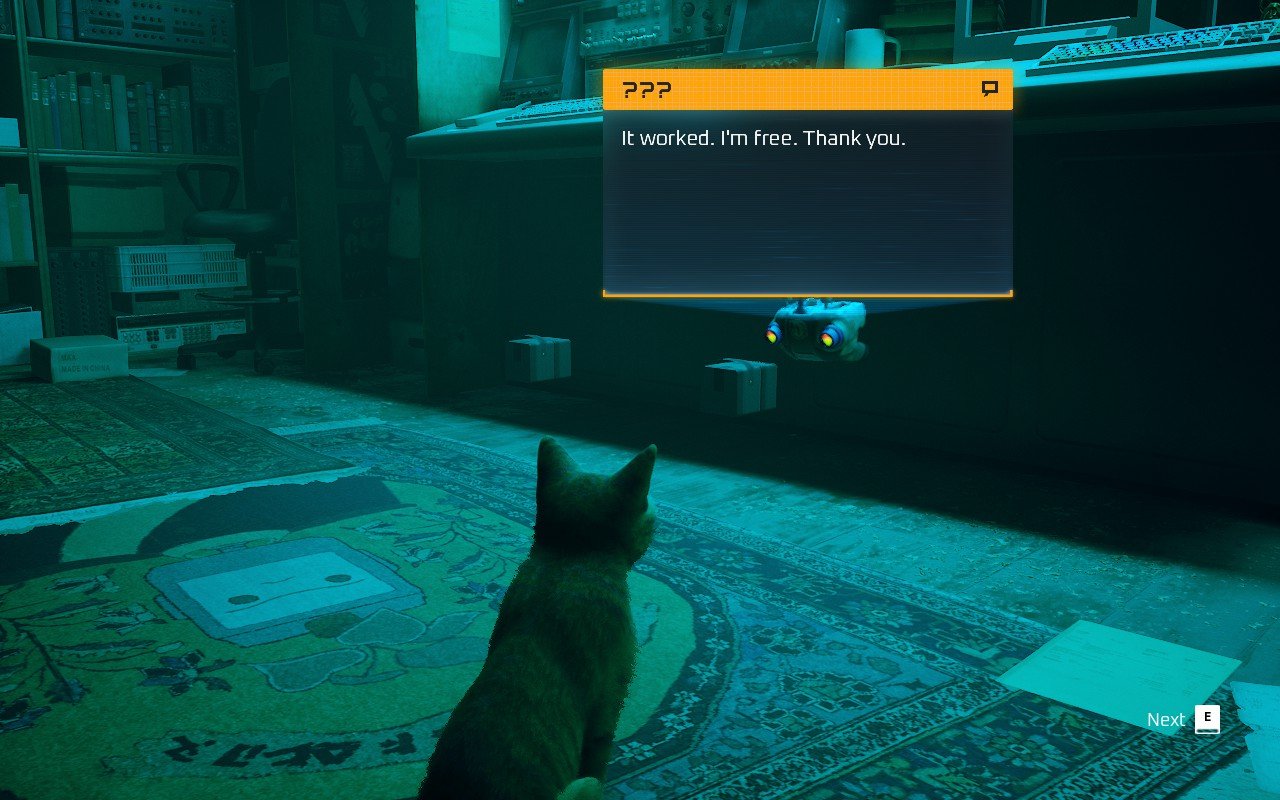 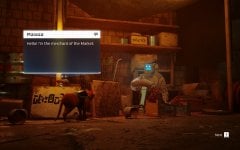 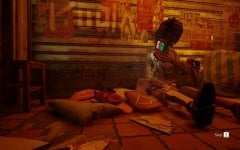 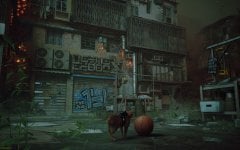 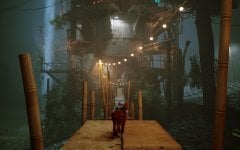 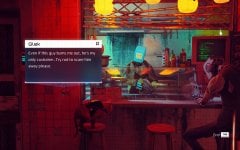 Stray’s minimalism and linearity doesn’t necessarily spell its doom but enhances its focus. It might not be that appealing to those looking for a challenge or a lengthy game to get immersed in, but this is not its focus. Rather, it focuses on the atmosphere which delivers a memorable experience on its own, with the bonus of having an adorable furry protagonist (and I’m saying this as a non-cat person!). It indeed lives up to the hype if you've been itching for an original and well designed game; and at that, the cat game doesn't disappoint.

What We Liked ...
What We Didn't Like ...
8
Gameplay
Stray’s gameplay mixes platforming and puzzle solving with a cat-centric approach and it works brilliantly in this context.
9
Presentation
Despite being mostly devoid of organic life, the walled city our feline protagonist finds itself in is brimming with activity and detailed environments.
8
Lasting Appeal
Even if progress is mostly linear in Stray and it lacks overt challenges, the atmosphere in itself is gripping.
8.3
out of 10

Stray is a purr-fect cat game that doubles as a well executed, memorable platformer.
Reactions: zecoxao, gnmmarechal, MicroNut99 and 11 others
Share:
Facebook Twitter Reddit Pinterest Tumblr WhatsApp Email Share Link
This game is brilliant, adorable and dark.
I had so much fun playing it and I really hope there will be a sequel.
Reactions: Mama Looigi, Chary and Marc_LFD
"There’s a dedicated meow button!"
For obvious reasons I need this game
Reactions: Mama Looigi, RedoLane, Prans and 5 others
The game is great but really could use some DLC eventually.
I finished this game a few days ago, I absolutely love it, it’s such a beautiful game, and the cat is very cute lol.
Reactions: Marc_LFD
I expected an okay game with a cute cat. Instead we got a grim cyberpunk game with commentary on humanity, with emotional moments, and also a super cute cat. Cat of the year. Cat/10
Reactions: Mama Looigi, Phearoz, RedoLane and 2 others
I just finished Stray tonight. I’ve not seen anyone else say this, but is the entire plot of the game not just an attempt for a cat to get a human to open the [email protected]#king door?
Reactions: Metoroid0, Mama Looigi, dragonblood9999 and 2 others
I'm interested but also not if that makes sense. I'm gonna get a pc to stream with before I consider any more non-nintendo game purchases lmao
really enjoyed the game despite it being so short
Wonder if will be available to other consoles some time later...
Absolutely love it. They should have allowed the option to edit the cat's appearance.

Best leading game character to come out in the past 15 years.
Seriously, we need MORE games like this. I'm sick of the trendy stuff.. A game where you play as a cat (or a mouse, or even other animals..), some puzzle-platforming gameplay, stealth sections and the like, whatever that fits..
"Stray" reminds me of Ratatouille (the Game) & Stuart Little 3 on the PS2, both of which i enjoyed playing when i was a kid.. Good stuff!
Easily one of my GOTY candidates. The soundtrack sticks in my head whenever I go check the street cats recently.
Reactions: CoolMe
Let me know the following: whether someone, who hates cats, enjoyed it?
Reactions: Metoroid0

octopus said:
Let me know the following: whether someone, who hates cats, enjoyed it?
Click to expand...

I can tell you i don't even wanna play it and i despise cats lol
looks fucking stupid as a game to me
The game is really great for its apt pricing. That's important and I've seen no mention of it.
It'd be terrible at $60, but at $30, it's totally worth it.

Lazyboss said:
This game is brilliant, adorable and dark.
I had so much fun playing it and I really hope there will be a sequel.
Click to expand...

I would be stunned if this game didn't get a sequel. You see all the articles on it running the Steam wishlist? Hugely popular for an indie.
gaming has fallen off a cliff

all the hype for a cat walking simulator
Reactions: Metoroid0

RedoLane said:
Easily one of my GOTY candidates. The soundtrack sticks in my head whenever I go check the street cats recently.
Click to expand...

Lazyboss said:
This game is brilliant, adorable and dark.
I had so much fun playing it and I really hope there will be a sequel.
Click to expand...

Sometimes it's nice to leave things open-ended, while other times sequels turn out to be worse off or just rehash of original game

The problem with sequels is how would you continue the story ?
My possibilities....

The ending shows 'Stray' leaves the compound & he's (she ?) lost her friend - the drone, although the power surge at end could indicate friend is alive - Maybe meet (advanced) survivors that can offer to save re-transfer friend which causes a return to compound

Maybe Stray can meet up with their family that offers new puzzles (Multiplay option perhaps ?)

The larger outdoor area could supply a lot of new challenges & hostiles (mutant dogs/rats ??)
'Lack of challenge'
yeah about that...i was wondering what can cat simulation offer as a challange....

CannonFoddr said:
Sometimes it's nice to leave things open-ended, while other times sequels turn out to be worse off or just rehash of original game

The problem with sequels is how would you continue the story ?
My possibilities....

The ending shows 'Stray' leaves the compound & he's (she ?) lost her friend - the drone, although the power surge at end could indicate friend is alive - Maybe meet (advanced) survivors that can offer to save re-transfer friend which causes a return to compound

Maybe Stray can meet up with their family that offers new puzzles (Multiplay option perhaps ?)

if its a fun adventure about jumping i dont believe story is that important tbh... just make up some random story and jump and run again.

andrewkendall said:
I just finished Stray tonight. I’ve not seen anyone else say this, but is the entire plot of the game not just an attempt for a cat to get a human to open the [email protected]#king door?
Click to expand...

thats what you get when indie games go mainstream.

@ Veho: Everyone should eat a cookie. 18 minutes ago
Chat 1