How would you fare washed up on a desert island? Find out today in the castaway simulator Stranded Deep!

In a world where times can be trying and life can be difficult, you would be forgiven for wanting to get away from it all, wishing you were on some sun-soaked island somewhere surrounded by crystal clear blue seas. Alas, as responsible people we cannot just drop everything, and you cannot jet off on a whim anymore, so why not bring such desired experiences into your living room and simulate it all. Stranded Deep by Beam Team takes a skewed look at the ideology of a secluded deserted life in a tropical climate but adds in the realism of having to survive each and every day with the bare minimum. Will it be a dream or will it prove to be a task heavy, resource sparse nightmare?

You begin your descent into insanity aboard a private jet, just you and your pilot, when something goes awry and you crash land on the water in a ball of fire. Stuck inside the cabin, your first task is to find a way out and get into a life raft, which is actually relatively simple given the severity and confusion in your current predicament. Boarding the life raft you find yourself with an oar, an anchor, and a small three-slot supplies satchel with bare minimum rations and a handy roll of duct tape. Picking up the oar, your first tasks populate the HUD and you have a sense of direction and purpose. As you paddle toward the island immediately before you, you can't help but notice a couple more islands just a bit further out in the ocean. I immediately got to thinking: are these relevant, do they give me a false sense of hope or lead me to believe anyone else is out here in the wide blue yonder? I would have to get adventuring to find out. 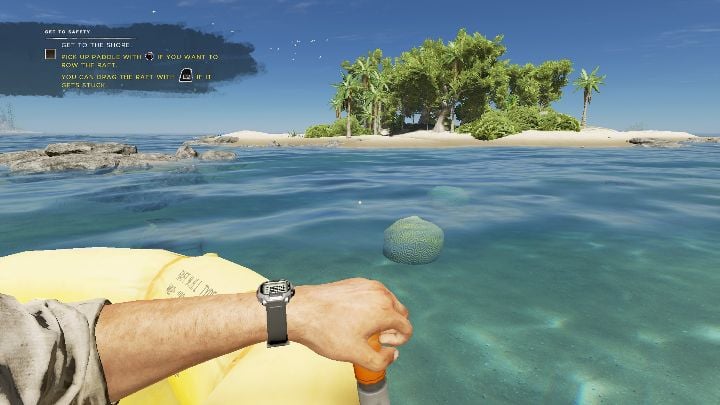 Controlling your character is very straight forward, with predominantly a first-person shooter control scheme throughout, but with tactfully bolted on menus with which to craft your self senseless. When I say crafting, I literally mean starting out like a caveman. You have nothing of use on you, so you need to gather rocks to craft a very basic, primitive-looking stone tool to get you started. The hand holding within the beginning 15-20 minutes of this game is essential in my opinion, as without it you would be left to your own devices with far too much ability and not enough direction. Take heed of the hints and tips, and remember to take care of your gear, specifically the raft. Pro tip: do not let it float off!

Inventory and crafting menus are reserved for the first shoulder button pair, and interaction buttons drag and attack assigned to the second pair of triggers. Hitting the triangle button brings up your watch, with which you can track statistics like your dehydration, the sun UV index, and your health state (for example, if you have been poisoned or are bleeding). Cross jumps, circle drops your currently held item, and square picks up whatever you're focussed on immediately in front of you. The crafting menu initially confused me—I thought it was overly simplified until I realised that after hitting R1 to bring up the main menu where you can search for what item you wish to craft, subsequently hitting L2 or R2 then brings up sub-menus for each of the categories. These categories include building consumables, health items, tools, weapons, and constructing building pieces that can be pooled together to craft anything from a leafy sleeping bivouac to a mansion-like dwelling full of artefacts depending on your level of effort.

Games like Ark have revitalised and popularised the create and craft genre in recent times, and in comparison, Stranded Deep is a hugely scaled-down variant that deals with the hyper-realistic specifics of deserted island survival rather than needing to create battle armour for a tamed tyrannosaurus rex. I quite liked the scaled-back approach of Stranded Deep. It conveys a brilliant sense of realism here as you start with your first tool, a basic cutting implement made from a sharp rock edge. You can then craft lashings from fibrous leaves, add a lump of wood and you've got yourself a decent little stone knife with a handle and higher durability. Building off of that knife you can then craft an axe, mallets, even bows and arrows and fishing spears. Running around to grab materials builds up your physical strength, but tuckers you out and requires you to source coconuts to drink from and eat, or crabs to kill, carve up, cook and devour before the delicate meat spoils. The initial requirements are obvious; build a fire, make a shelter and get some water, not the plentiful salty seawater, into your body before you fatigue into oblivion. Items such as firepits require you to collect rocks, sticks and kindling to assemble. You are then treated to a small mini-game, where hitting L2 and R2 in alternation builds up a friction bar to make that spark to ignite your first fire. It's at these seminal moments that you realise all of that effort was for a simple little bit of fire, something we mastered aeons ago, yet we take it all for granted daily. Once you have caught up with our prehistoric ancestors, fist-bumped the rising moon, fretted a little at the setting sun and finished your little victory dance, you can get back to scoping out your newly available craftables, because doing all that has levelled you up to be more proficient in building useful things.

Items vary from fishing floats made of one single item to complex mechanisms and structures that require multiple items to craft just one component for its entire build. As an example, you may need leather to craft a fixture for a piece of a building. However, to craft leather you need to have crafted a loom to make cloth, you need to have hunted various creatures and already made secondary items out of primary materials. It's an utterly fascinating tiered system that, rather frustratingly and time consumingly, is actually ultra-realistic. That was until I noted that one of the higher tier craftables was essentially a helicopter. Yes, I fully understand how damned cool it would be to fly a chopper around these idyllic and beautifully lush tropical locations, but how the heck do you jump from caveman to helicopter engineer in a matter of days? As crazy as it sounds saying it out loud, it's this minor stretching of reality that keeps this game intensely interesting and motivating. If I had a chopper I could fly home! 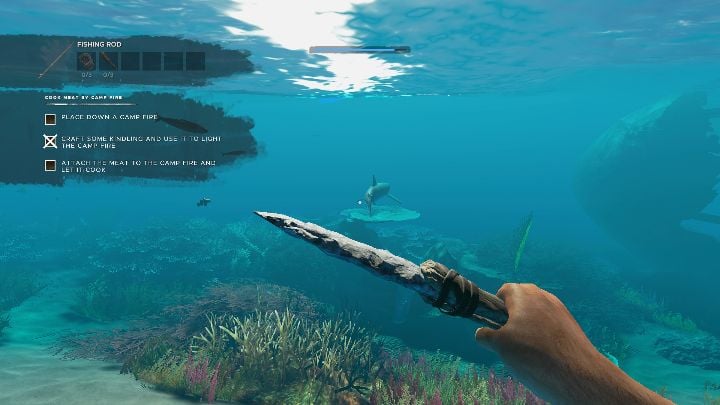 Once you have the basics down, and you have expanded your inventory slots to the max and filled them with the most useful components, you can find that you have almost entirely deforested your island and depleted it of anything useful. This is where diving into the ocean and even island-hopping comes into its own. When you begin the game you essentially seed a randomly generated map of islands. Each island is procedurally generated and every experience when you start from scratch will be different in several ways. Initially, I started on a small island with a mass of trees in the centre, when I lost my first game save I restarted and the new island in front of me looked tiny. I decided in my wisdom to forgo the first island presented to me and I dug in by rowing to a distant island. This one was a bit more characterful, less traditionally tropical, and seemed to have slightly different and taller trees. There were also more metallic bits and pieces scattered there, so I managed to make alternate tools and things compared to what I could scrape together on my first island.
The key to this game is resource management. Make the essentials, ensure your health and durability of tools, then go out of your comfort zone, diving down deep into the seas to discover new things to bring back to your centre of operations. Beyond that, you are free to hop from island to island in search of more materials, but you can always head back to your initial island if you choose to make that your base camp. Though the main premise of this title is obviously survival, beyond surviving 20 days, searching every square of the map, and popping every trophy available, you will also find boss fights featuring megafauna and ultimately methods of escaping this harsh reality. As per usual with my reviews, I will be trying my hardest to not give away any spoilers here. I want all of you, who are interested in this game, to discover everything yourselves as it will feel far more of an accomplishment for you to do so. In general, I refuse to look up any guides or hints, and I have probably missed quite a bit, and I think that I still have plenty left to explore as I peruse the archipelago, and that's the way I wanted to play this game. Unadulterated exploration and experimentation.

I realise that this game has been on PC for going on 5 years, thanks to the early access system, but as it stands Stranded Deep feels a bit like it's still unfinished. It's a little rough around the edges, slightly choppy and jerky, the controls are inaccurate at times, and it crashes occasionally. The game feels heavily unoptimised, chugging around and visibly loading in and out, which is surprising considering the download is just 1.1gb in total. The UI is laggy in many places and kind of clumsy, but having said that, I loved the ability to pin your next craftable items scavenge list to your HUD to give you direction. Plenty of the creature models are fantastic and animate beautifully, but then others look severely low poly at certain angles, particularly jagged looking birds with barely three frames of animation. The shadow that you cast as you run about looks ludicrous and it's simply horrid to have to witness. This game just needs more time to bake in the oven of development, it needs those birds keyframes animated and interpolated properly, it needs better shadows just for your character, and overall I feel it needs more critical feedback with constructive comments from new players as after 5 years we still have these oddly slow, messy elements in an otherwise beautiful and wonderfully envisaged game. 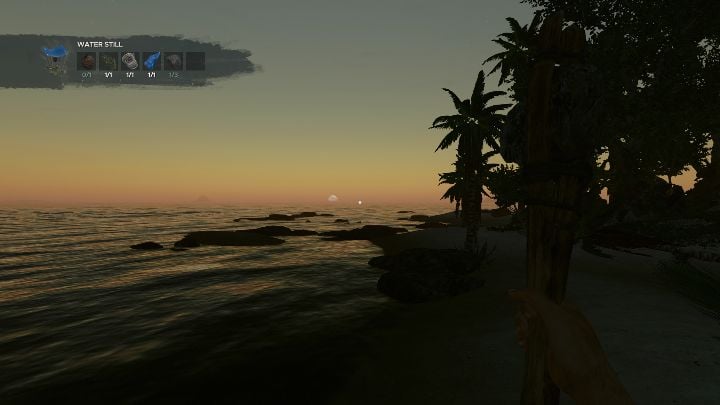 Stranded Deep is not a terrible game, not by any stretch. There are a lot of endearing features which makes this hugely enjoyable, it's just a shame how frequently the save games failed or the game crashed when venturing between islands. At one point I was massively cheesed off with this game—I honestly didn't want to have to re-redo my in-game days and days of progress, just to get a little further and risk losing it all again. But I persevered and pushed through to try to wring as much exploration and achievement as I could, and I'm deeply glad I did. This game has been patched several times now since I began reviewing it, and the majority of these issues have been resolved, however, it is always possible for any game to crash unexpectedly, so my advice is to make sure you save frequently. Stranded Deep is a rewarding game which gives you a solid appreciation for what the devs have strived to achieve here, and if island life with crafting and solitude are your things, then this game should be one to pick up when you feel the need for escapism. It's currently just £16.99 on PSN, so it would be rude not to.