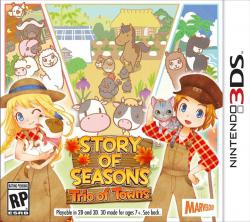 Living up to the title

As you may have guessed, Trio of Towns' defining feature is its inclusion of two extra towns. The usual bustling marketplace seen in most farming games has now become three bustling marketplaces. The somewhat dully-named Westown is an appropriately wild-west themed village, the Hawaiian town of Lulukolo has a heavy Polynesian theme, and the eastern Tsuyukusa hits close to home for the Japanese developers. Each town has its own individual NPCs, shops, and quirks; to give an example, Lulukolo closes all shops for a "mid-day siesta" to beat the heat. Each town has its own festivals, eligible bachelors, and prices, giving the player a plethora of places to visit during the day.

Lots of the title involves increasing the Town Link Rank, which starts out as an E for each town and can be increased up to A.  This can be increased by forming relationships, patronizing shops, doing small jobs, and attending other social events in each town. There are also rewards to be had for getting each rank to A, so it's beneficial to visit and socialize in every town each day. 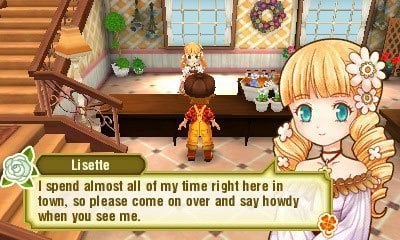 While this addition may not seem like much, this is a huge step up in terms of the content and longevity that this game can offer. Prioritizing farm chores, social events, and relationship development in three different places is a challenging activity in itself. This might seem overwhelming, but Trio of Towns goes out of its way to make this all possible. The various townships' schedules tend to line up with each other in a way that makes patronizing all of them within any given day entirely doable. Settling into the right rhythm of hopping from town to town to town is a good feeling which makes the player feel on top of things, so to speak.

Admittedly, Story of Seasons is slow to start. Half an hour of entirely unnecessary cutscenes and tutorials are definitely a slog to get through. The tiny house, inadequate farm lands, and single town feel very limiting at first and are an unnecessary way of slowing progress. However, once everything gets unlocked, the experience becomes much more pleasurable and relaxing. Like I said earlier, settling into a rhythm feels smooth and easy, and there's no particular stress to do anything unless the player wants to. If someone really wanted they could quit farming and just focus on getting married or vice versa. The freedom to choose is here in a very low-pressure environment. While the game certainly does encourage a little bit of everything in terms of farming, husbandry and relationships, it's unnecessary to do any of those if it's inconvenient. Story of Seasons does an excellent job of putting the control in the hands of the player. 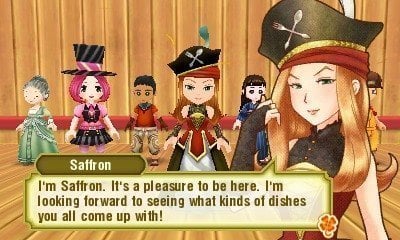 This leads into the title's atmosphere and the general farming experience. In one word, the entire ambiance of the title could be described as "peaceful". The music, the events, and the whole essence of Story of Seasons is calming and made to please. There is basically no stress to be had in any situation, making it a perfect game to put down and pick up at any time. Although eventually plants and animals can be lost due to lack of care, caring for them is no difficult task, and the game is somewhat forgiving when it comes to forgetting to feed the chickens or water the potatoes. Overall, Trio of Towns does a good job of keeping the player relaxed throughout the experience, disguising the many layers of content it contains.

While it may not initially appear expansive, Trio of Towns is absolutely packed with content, giving the title a surprising amount of longevity. There are over 40 individual NPCs, many of whom can be courted for marriage, and each of them has different lines for different events and different times of the year, each with a unique personality. Surprisingly, a huge variety of pets is also a main feature, ranging from common dogs and cats to the adorable capybara. Pets can accompany the main character on walks, unlocking many different dialogues, sometimes even between pets and other animals.The strange "furmiliar" system involves a weird initiation ritual which essentially selects a pet as a favorite and "bonds" it with the main character, also unlocking various different events. 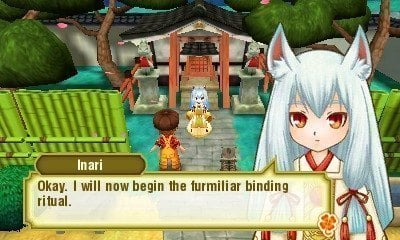 Other new features include fishing in any body of water that can be accessed, which is a noticeable improvement from the previous title, in which fishing was only possible at one spot. Quick greetings can be sent to NPCs by pressing the L button to determine their mood and affection, as a small response is shown at the bottom of the screen. All these small optimizations make the game feel much more full-featured when compared to its predecessor and serve to heighten Trio of Towns' quality.

Unfortunately, I did find presentation to be a bit lacking. While the 2D assets are nicely drawn and look great, the 3D models are clearly in need of some work. The proportions are off in a semi-chibi style that looks inhuman and is unappealing to me. Performance takes a hit here as well, as frame rate drops frequently occur during certain events. While some of the stereoscopic 3D effects look nice and are well-executed, the performance takes too much of an overall hit as a result. Unremarkable, often repetitive music doesn't help make up for these visual issues either. However, good character designs and 2D assets do offset the generally poor quality of the 3D figures.