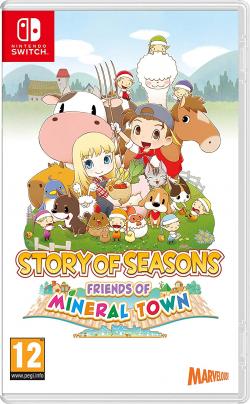 An iconic setting and what many would consider the pinnacle of the series, can Story of Seasons recapture the original magic of Mineral Town?

Throughout my childhood, nothing quite went together like farming and Harvest Moon. I couldn’t think about one without the other, and while other prominent titles may have released since, the name still holds fond memories for myself and many others. It’s necessary before continuing to say that Story of Seasons is the Harvest Moon you came to love as a child; or perhaps it’s more apt to say Harvest Moon is Story of Seasons.

The long and short of it is that Natsume published the Bokujo Monogatari games in the west as Harvest Moon, and when Marvelous decided to stop licencing the series to Natsume, Natsume maintained the rights to the Harvest Moon name. It’s bizarre, but it helps explain to some degree why the sequel to what many would consider the pinnacle of the franchise, Harvest Moon: Friends of Mineral Town, is now releasing under the banner of Story of Seasons. With that out of the way, does it still hold up more than 15 years later? 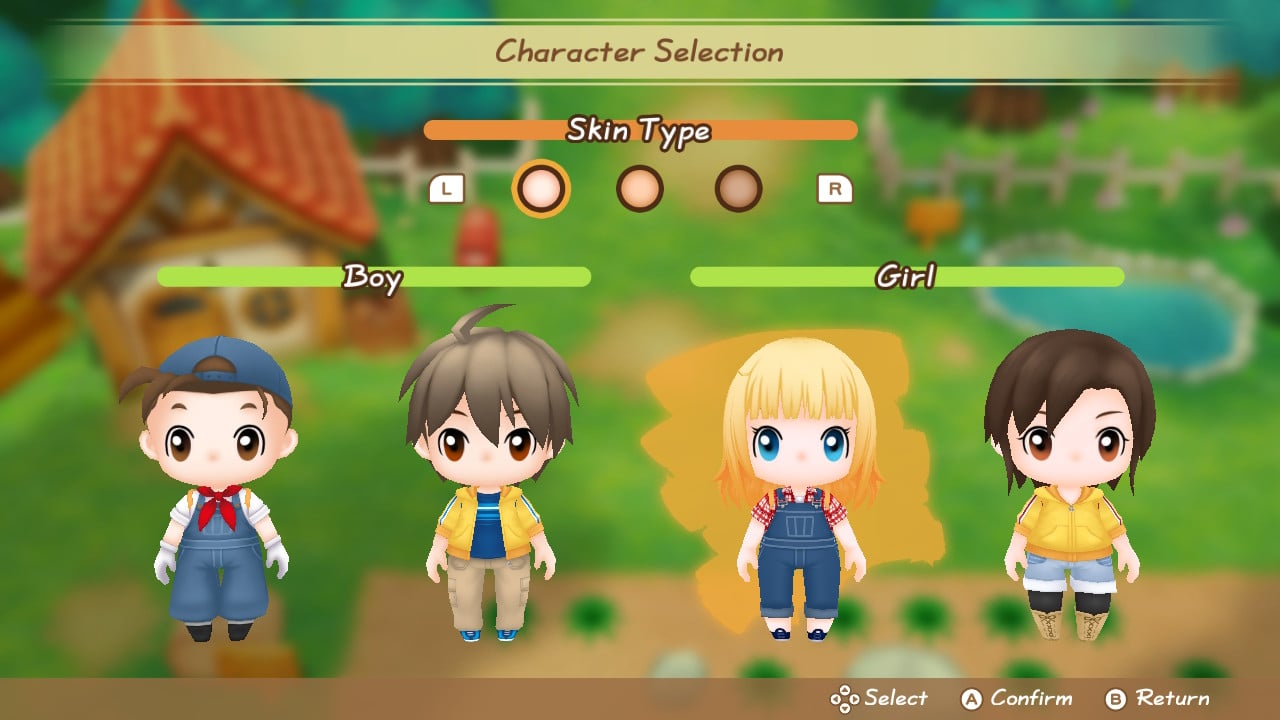 Starting the game for the first time, you’re presented with a few options: the first to pick a character design and skin colour, and the second a difficulty setting, alongside your usual name and birthday. The customisation on offer does little to rival that of Stardew Valley, but is enough to feel like you have a say in your character’s appearance and form a satisfying connection from the get-go. It’s worth noting here that same-sex marriage is possible in this game, so you’re really free to live your best farming life without having to compromise on your character to get the love interest of your dreams. Likely the most interesting addition here is the choice of a simple or normal difficulty. The difference is somewhat minimal, and regardless of your choice, your opportunities aren’t limited as you play. With simple mode offering a gentler start, as well as items selling for a bit more and the locals being a little friendlier, you still get the full Mineral Town experience. The wonderful thing about simple mode is that it’s what other games may try to sell you as an extra; ultimately, it’s a time saver. You get a bit more money, people like you a bit faster, it’s here not for people who want a dumbed-down experience, but for those who simply don’t want to commit so much of their time to the farm. Perhaps the only down side is that you can’t readily switch between these modes. It’s a commitment you need to make from the start, but a wonderful addition overall.

When it comes to plot, the setup is simple. You visited Mineral Town in your youth to spend a summer on your grandfather’s farm. 20 years later and your grandfather since passing, the farm is somewhat in ruins, and it’s your job to pick up the pieces…assuming you want to anyway. One of my favourite parts of any game, you can get the credits to roll within minutes of starting by just saying you don’t want to do it. The mayor of Mineral Town accepts it without pressuring you, and sets you on the next train back to the city. It’s a silly inclusion, but one I always find myself appreciating far more than the alternative of endlessly looping dialogue boxes. Once you finally accept your farming fate, you’re let loose and the game can really begin. What you make of it is entirely up to you. 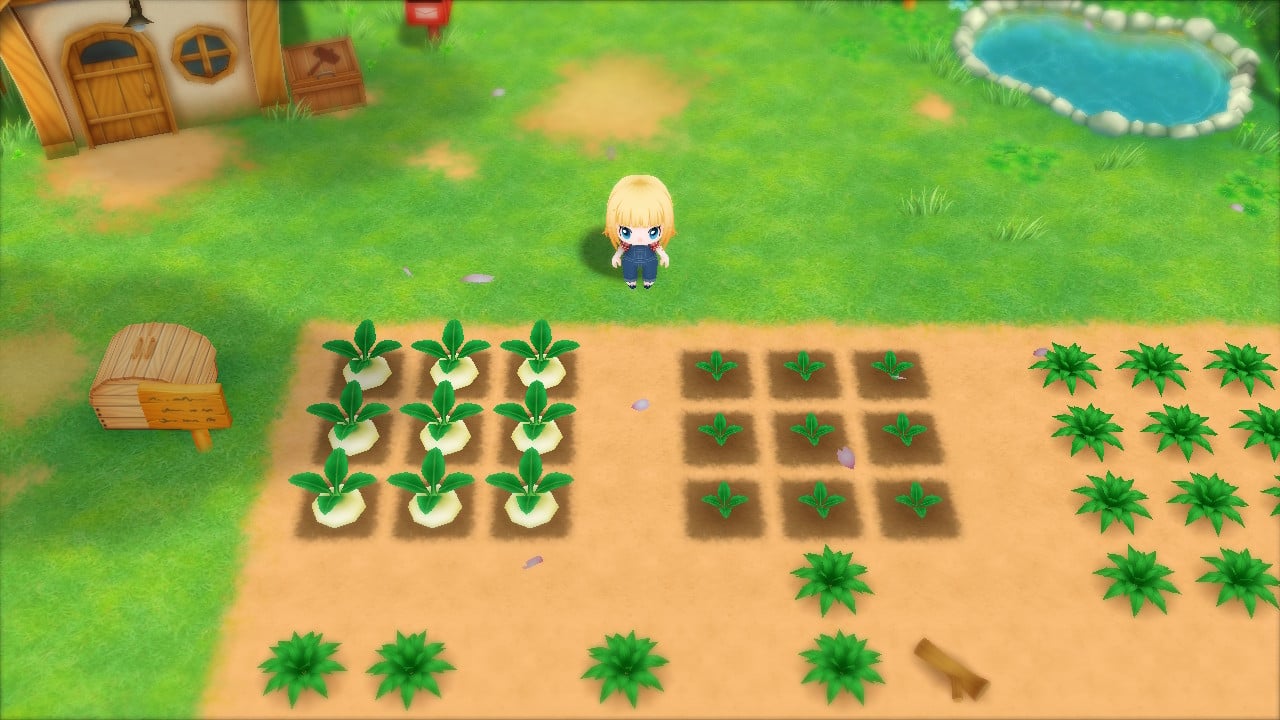 Playing on Simple Mode grants you a few turnips to get you going!

Your first year in Mineral Town is one of plentiful choice. How you grow as a farmer, and in turn, how your farm grows as a result, will vary significantly from person to person, and playthrough to playthrough. At the core of the game, you have two components: farming and animal tending. Farming is as simple as it ever was. You till the ground with your hoe, you spread your seeds, and you water them each day until they’re fully grown. You then sell the crops, buy more seeds, and there’s your money-making cycle. While this will be familiar territory for many, a welcome change here is the fact you can walk over your crops once planted. In the original game, once partially-grown, crops would become impassable tiles, making it incredibly difficult to reap a full yield without upgraded tools. With this change, you can both make more money early on, and navigate your field easier. 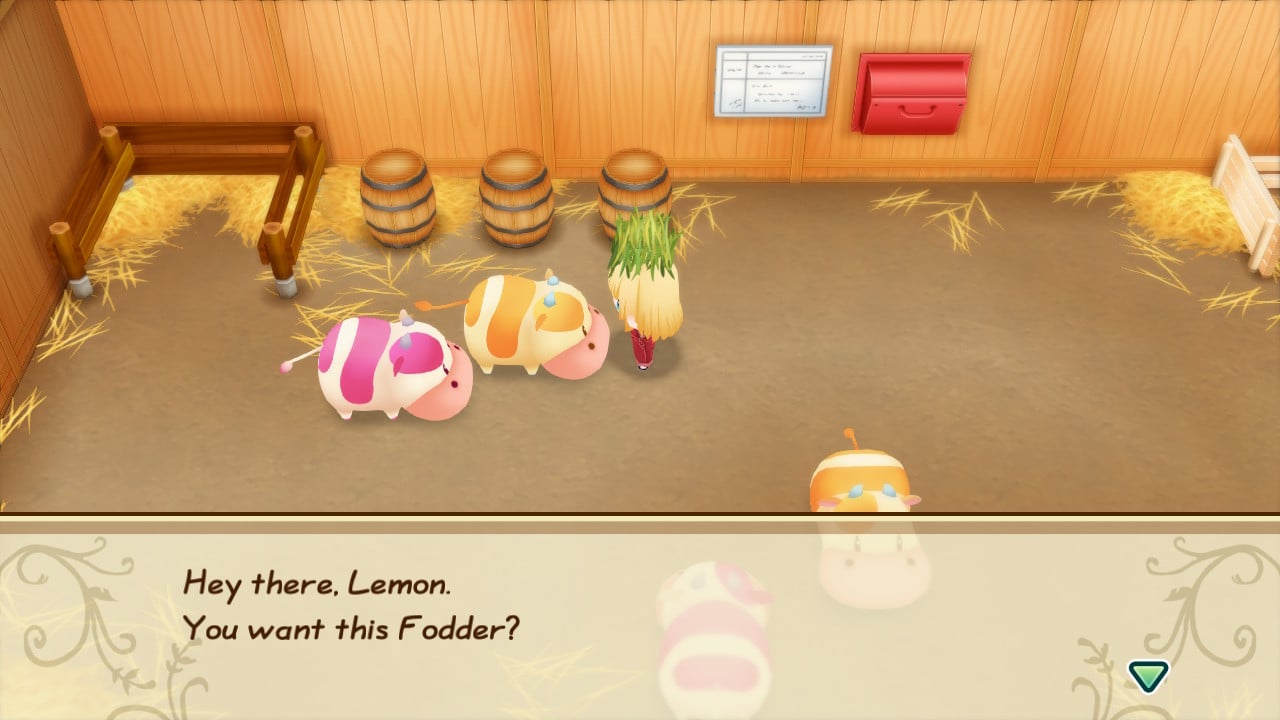 Animal tending is something that generally comes a little after farming. Once you have a bit of cash, you can head into town to buy yourself one of a brilliant array of creatures. While your usual cows, sheep, and chickens all feature here, there’s also a few more unusual picks. Though alpacas are a favourite of mine, the spotlight really must be shined on the flavoured cows, available as strawberry, coffee, or fruit. Aside from looking adorable with their own unique colouring and tail design, they also, you guessed it, produce specially-flavoured milk. Where else would strawberry milk come from if not a strawberry cow? Though significantly more work than crops, animals come with their own perks. Looking past the genuine affection and sense of attachment you gain for these creatures, each comes with their own sustainable byproduct, varying from animal to animal. Cows give milk, sheep give wool, you get the idea. As the animals come to like you more, their produce becomes more valuable, resulting in more money for you and a sense of satisfaction that you got them to that point.

Perhaps a minor criticism of mine in this department, but one that detracted from the experience all the same–bought animals can never fully love you. Now this sounds silly, and to me, it really is, but the animals you buy from PoPoultry or Yodel Ranch have a hard cap on their affection. Limiting you to five hearts out of a possible ten, it makes your initial animals feel like little more than a means to an end. At five hearts maximum, their produce is also limited in quality. The only way to increase this cap is to breed your animals. Breeding two five heart animals gives you offspring with a cap of six hearts, this continuing all the way to ten hearts. It’s tedious. It rewards those who play patiently and systematically, and it’s both a blessing and a curse. It’s something you really have to aim for, and whether the investment of time and effort is worthwhile to you is something I really can’t predict. 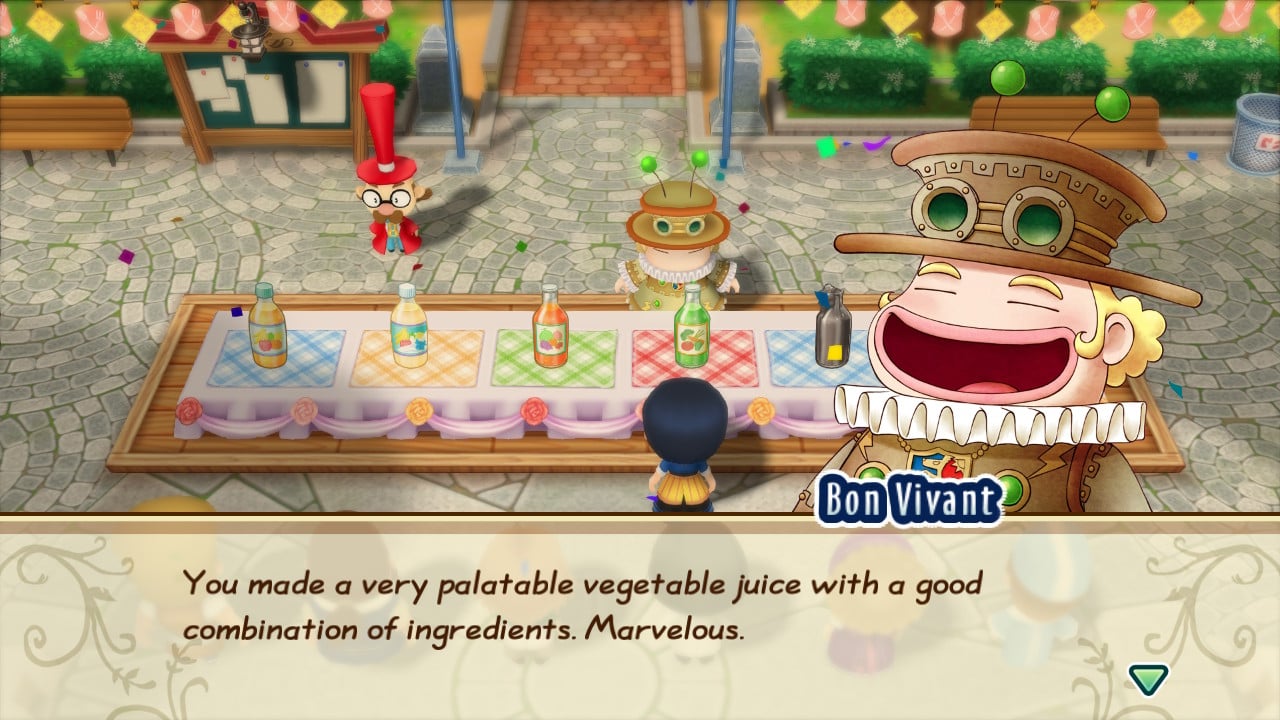 For those wanting to participate fully in events, however, it may just be essential. Littered across your farming calendar are a series of fun events. Ranging from seasonal festivals, to cooking competitions, to animal shows, horse races, and everything in between, Mineral Town does its best to keeps its residents entertained. My favourite of these has to be the Spring and Autumn derbies. In these, you get to watch and bet on horses for some serious profit if you happen to play your cards right. You’ll find there’s something interesting happening almost every week, breaking up your regular farming life in fun and interesting ways.

Of course, the farm isn’t the only point of focus; the game’s called Friends of Mineral Town after all, and making these friends is somewhat of a mixed bag for me. This remake is remarkably faithful to the original design. You become friends with people by talking to them daily, and you raise affection by giving people gifts. After so long, you trigger events with these people, getting to know them a little more and getting them to know you a little more. It’s a simple system to grasp and an enjoyable system to partake in, but it leads me to my biggest issue with the game as a whole: the monotony. 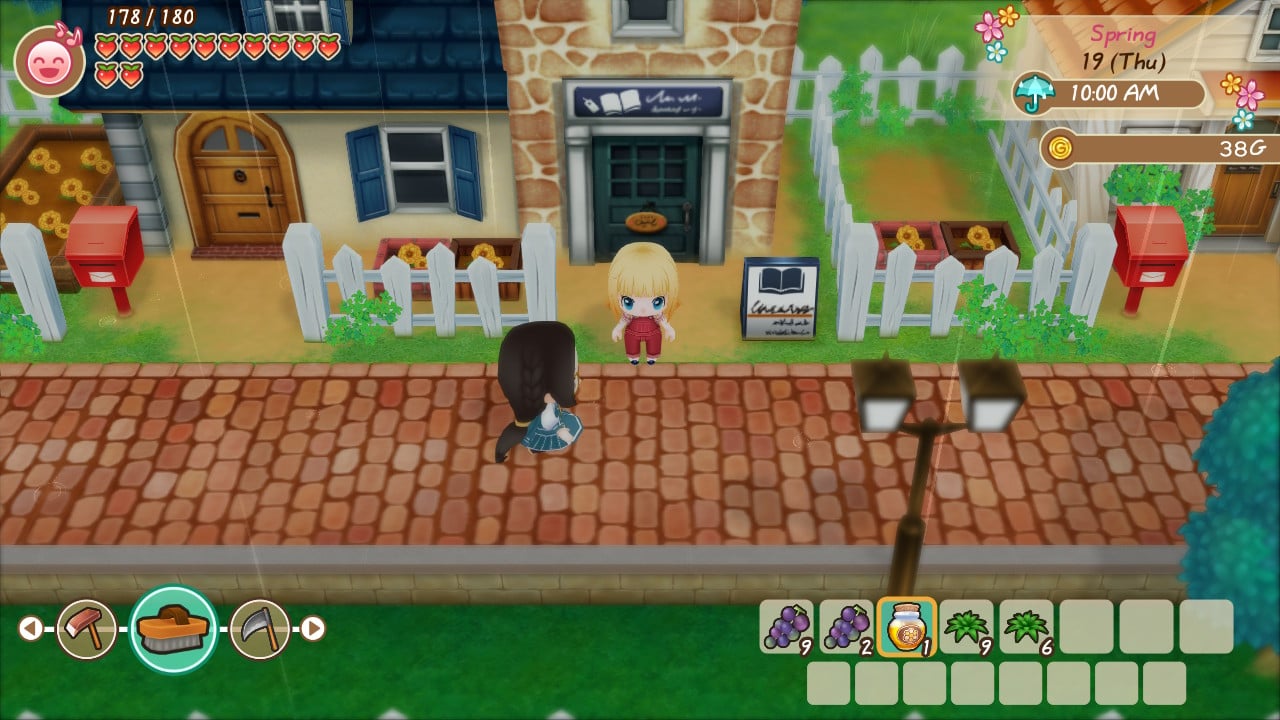 The game is repetitive. There’s no beating around the bush with this. You start out fresh, you start out exploring, you start out starry-eyed and curious to the world, but this has its limits. Once the people have been talked to, the fields cleared, the animals safely where they belong, you find yourself falling into a cycle. Water crops, feed animals, talk to animals, get produce from animals, talk to love interest, give gift to love interest, sleep, repeat. The fine folks of Mineral Town remind me of Majora’s Mask’s Clock Town residents. They’re on a schedule, destined to repeat the same events, spout the same lines. I want to learn more about these characters, I want to bond with them, I want to care about them, but there’s only so many times I can read the same thing before coming to the conclusion it simply isn’t worth it. Mineral Town as a whole lacks the variety of life and activity to stand tall as an unguided experience. In some respects, I’d say this remake is too faithful to its predecessor; the genre has moved on, but this game is by design stuck 15 years in the past.

Similarities aside, what has changed is just as interesting. You have a new art style, which brings with it new character portraits, a better inventory system, and one of the best UIs I’ve seen in a game to date. The last point I genuinely cannot overstate, it’s fantastic. Everything is on-screen and accessible without being in the way. It presents your inventory and tools to you in such a way where you find yourself going entire play sessions without feeling the need to actually pause. There’s also a few extra marriage candidates, a few extra events, and, as a blessing to many, same-sex marriage.

All in all, this is Mineral Town. It’s the Mineral Town you always loved, with many of the same quirks, for better or worse. While I found myself utterly charmed in coming home to the farm, it’s not a game I could sit and play for hours on end. To me, it’s a game to be picked up and played a little at a time, and in its own way, that’s fine. Mineral Town is back, and one day at a time, I’ll be living my best farming life.