Headsets are usually designed for gaming, while audiophile-tier headphones are designed for listening to music. Having two pairs of headphones to fulfil both roles can get expensive and cumbersome, so SteelSeries has set out to create an ideal all-in-one set of headphones, which attempt to balance both worlds.

Our endless conquest to find the best set of gaming headphones continues. This time, we're back with a familiar brand: SteelSeries. Previously, we've seen their Arctis 7 headset, which happened to be wireless, working nicely for those that need a few fewer cords in their life. Now, we're checking out a wired variation of one of their headphones, meant for gamers that really can't live without audiophile quality, but also need their headphones to function as a headset during vocal gaming sessions. Can high fidelity audio quality and a solid gaming headset mix to create a perfect device for every need? We'll find out, with the Arctis Pro headset and GameDAC. 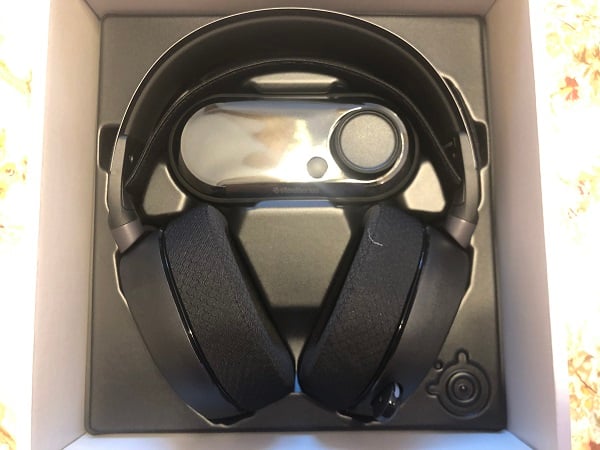 Pulling the Arctis Pro out of its brightly colored packaging reveals a simple-looking pair of headphones. They sport an all-black design, with thick plushy earcups, a matte plastic outer frame, and a metal headband. Running along the bottom of the headband is an elastic fabric, which can be adjusted to suit the size of your head. I actually really enjoy this type of headband--rather than have the headphones sit on the top of my skull, with the slightest of padding--as the elastic contours to fit perfectly and comfortably. The earpads are absolutely massive, covering my ear and then some, looking a little oversized on my small head, yet still feeling lightweight despite that.

At first glance, there's not much to the Arctis Pro, visually; the design doesn't stand out in any way, and the branding, while in two places, is low-key and minimal. When you plug the headset in, though, that's when they begin to shine, quite literally. On the outer side of the earcups is a thin ring, where beloved gaming RGBs glow brightly, in full force. There's always the option to keep the RGBs off, if you have no soul and like simplicity, but if I'm going to play around with a product that offers colorful lights, I'm going to want them on at all times. Curiously, the earcups have removable panels, which seemed like an odd design choice, until I realized that they were created that way to allow wearers to customize their headset if they wanted something that had a bit more visual flair, much like how the New Nintendo 3DS offers varying faceplates. This was a really cute detail, and I love when companies make it that much easier to customize your gear.

Fewer and fewer headphones seem to offer on-ear knobs or buttons. Luckily, the Arctis Pro does, with the left cup having both a mic mute button and a volume dial. This makes it easy to reach if you need to mute yourself at a moment's notice, or need to turn the volume down quickly without having to go deaf while scrambling for the volume mixer after alt-tabbing from your new, overly loud game. Nestled along the bottom of the left earcup are a micro-USB and 3.5mm jack, for connecting the Arctis Pro to either a PC, or to your console of choice.

Also attached to the left earcup is a retractable microphone. The mic is absolutely nothing to write home about, performing decently for a headset mic in online gaming sessions, and perhaps being considered passable for casual Twitch streaming, but not sounding impressive enough to put it in a league with better mics like the Logitech G Pro X's, or an attachable Antlion ModMic. 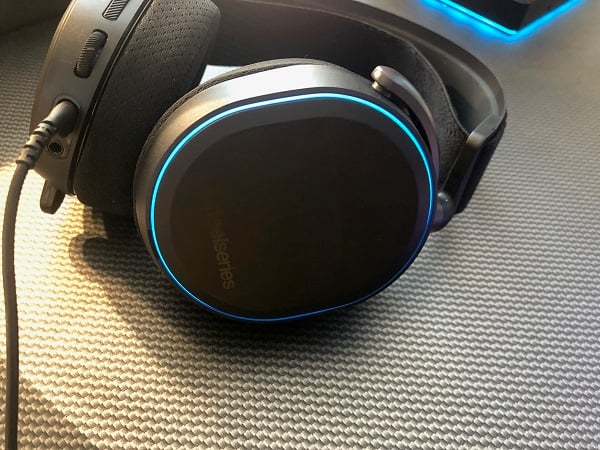 The most notable thing you get with the Arctis Pro might not just be the headphones, though; included with the top-of-the-line version is a little device called the GameDAC. As the name implies, this is a DAC, a digital-to-analog-converter, which improves the audio quality of your music. Starting off with appearances, the GameDAC features a bright OLED screen, to allow you to see your current headphone settings. On the front is a large dial, which you can use to access the menu, change settings, and twist, to raise or lower the volume. You no longer have to mess with audio controls on your PC or PS4, as everything you need is at your fingertips. In the menu, you can edit the equalizer and mic settings, change lighting effects, turn on DTS Headphones:X--a "3D audio" effect (surround sound)--or change your output, for use on PS4, PC, and Hi-Res PC audio. Overall, the GameDAC is incredibly useful, letting you keep an eye on your settings, and change them at a moment's notice, even you're in game or on call.

In my time listening to the handful of headphones I've gotten to try out for review, I've created a set playlist of high-quality lossless songs I use to test audio quality with. And the moment I hit play, I was taken aback with what the SteelSeries headphones had to give; not only were the instruments crisp, but in vocal songs, I could hear every slight waver of the singer's voice. Everything sounded even, with the highs, lows, and bass coming through with clear "hi-res" sound. I wound up noticing more intricate notes in songs I'd heard a dozen times; the Arctis Pro, when combined with the GameDAC, has downright impressive sounding audio. If, for whatever reason, you dislike the sound out of the box, you're more than welcome to do your own mixing, via the always-useful GameDAC. 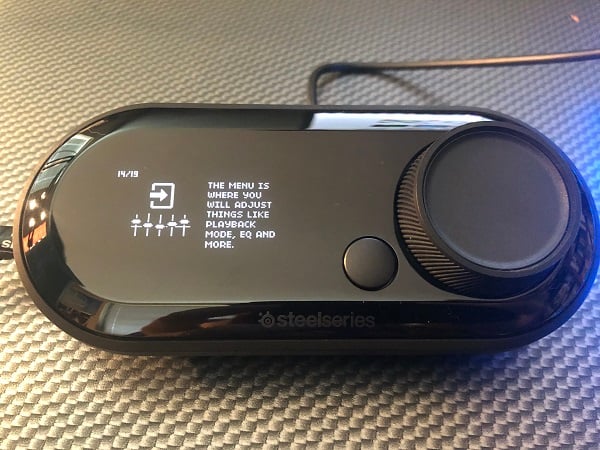 As this is a gaming headset, wearers will most undoubtedly want to have solid sound quality in not just music, but gaming as well. Fortunately, the Arctis Pro delivers in this category as well, giving bassy booms for massive explosions in Fallout 4, clear and loud vocals for the immense amount of voiced dialogue in The Outer Worlds, and sharp and snappy sound effects for punches in Dragon Ball FigherZ. Mentioned before was the DTS Headphones:X feature, which is the Arctis Pro's version of Dolby Digital surround sound, and while the former is boasted as being better at directional audio than the latter, I wasn't able to distinguish any major differences between the two. Regardless, DTS was great at providing audio cues for stealth games, and assisting in figuring out which direction enemies were coming from, even when they were hidden from view.

With a retail cost of $179.99 for just the headset, or $249.99 for a bundle which includes the GameDAC, the SteelSeries Arctis Pro have a daunting price tag. However, when you consider that higher-end gaming headsets average around the $129.99-$149.99 price point, and are purely dedicated to gaming, the cost of the Arctis Pro makes a little more sense, considering you're getting a great DAC, and headphones which can fit in both an audiophile's and gamer's lifestyle. Thanks to the GameDAC, there's also no fiddly and bothersome software to deal with, meaning your headphones won't ever conflict with your heated gaming sessions. If you can afford the price tag, the Arctis Pro are an amazing pair of headphones that blend hardcore gaming and hardcore music listening superbly.