If you're after a simple way to enjoy your game audio at a distance, you're in the right place!

Newton's forgotten law of physics: where there is a product, there is a gaming product. Be it flashy RGB lighting, an interesting choice of font, or a garish pointy design, a gaming product is noticeable. It's made to stand out in an often style over substance manner; it's made to catch the eye, to draw people in, and it often works. I like many a modern gamesperson have my fair share of fancily lit goodness surrounding me, but sometimes a gaming product is more. Sometimes it fills a legitimate role, sometimes you find a product like SteelSeries' Arctis 7 headset. 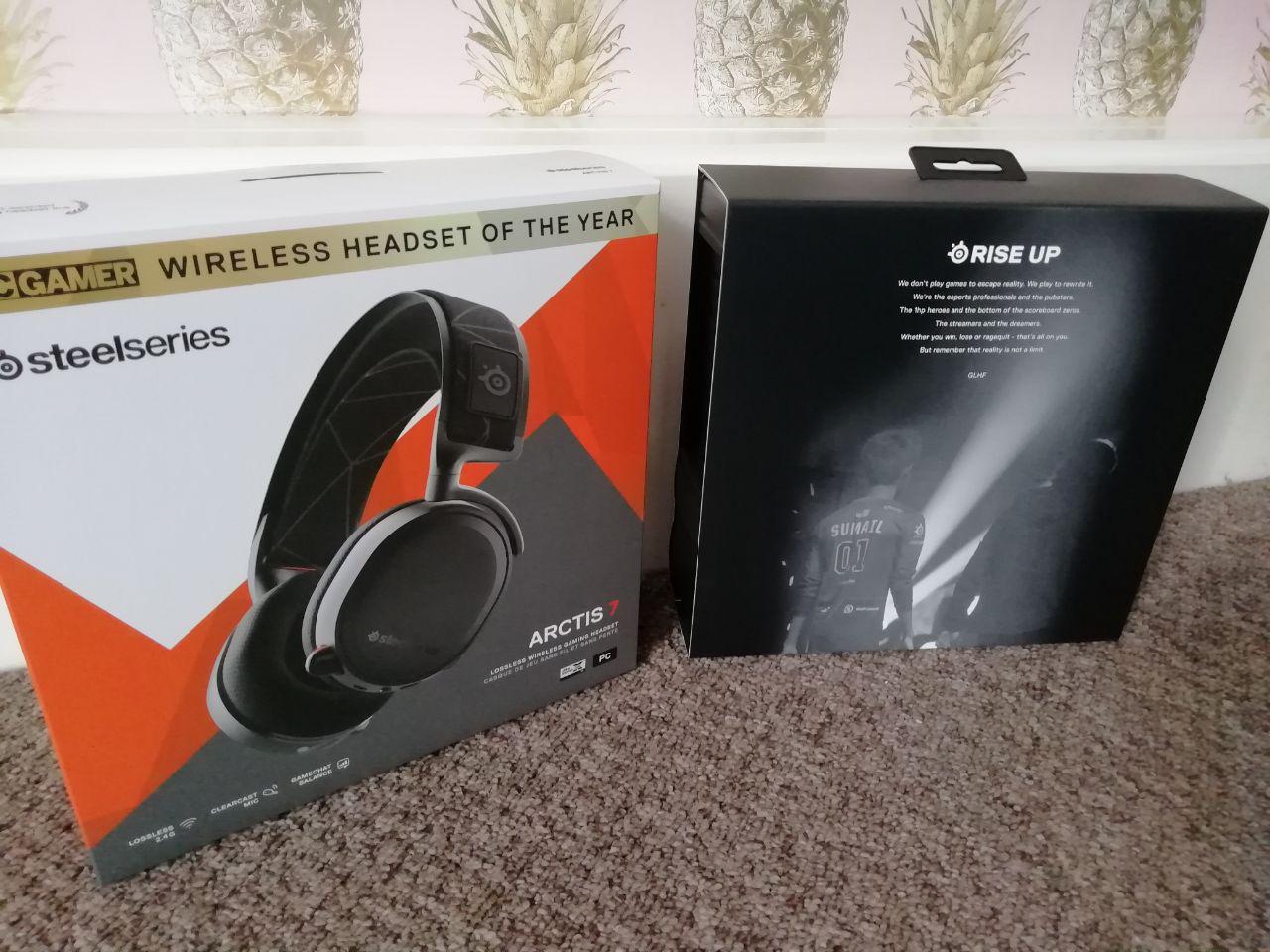 At first glance, you might think the Arctis 7 somewhat plain. You have two matte black ear cups held together by a similarly black plastic frame. Each cup is adorned with the SteelSeries logo, and the frame has a strip of adjustable elastic for your head to press against, alleviating any discomfort you may otherwise have with a standard plastic frame. Looking at the ear cups themselves, on the left you have a retractable microphone, as well as the volume dial and a few ports for charging and connecting the headset to devices via a 3.5mm jack, and of course a button to mute the mic. The right is a little less cluttered, housing only the power button and a dial to balance audio between two tracks. More or less, that's everything. They don't look particularly flashy, there's no RGBs, and there's nothing pointy; they're not even neon green! They lack the flair you might expect, and yet I can't help but find that a good thing. From a design standpoint, they're just headphones. They look refined, they look clean, and despite the plastic casing, they look and feel like a premium product.

Putting them on for the first time was an interesting experience. My head isn't overly large, to the best of my knowledge at least, but plastic frames worry me. I worry they're brittle, I worry I might put them on to hear an unfortunate snap. As somebody most acquainted with whatever I can find for as little money as I can spend, these fears are often justified. Having a play with these, at the very least I feel secure. My head resting on the elastic strip and the cups cushioned with some kind of comfortable fabric material, they feel really quite nice to wear. Even putting them over my glasses, they sit well, allowing me to use them for hours on end with no real kind of drawback. I've pulled at them a fair bit to see just how flexible they are for those more endowed in the head department than myself, and I'm quite impressed. They aren't something you'll break without putting real effort in, the plastic frame adjusting nicely to my bending and stretching. 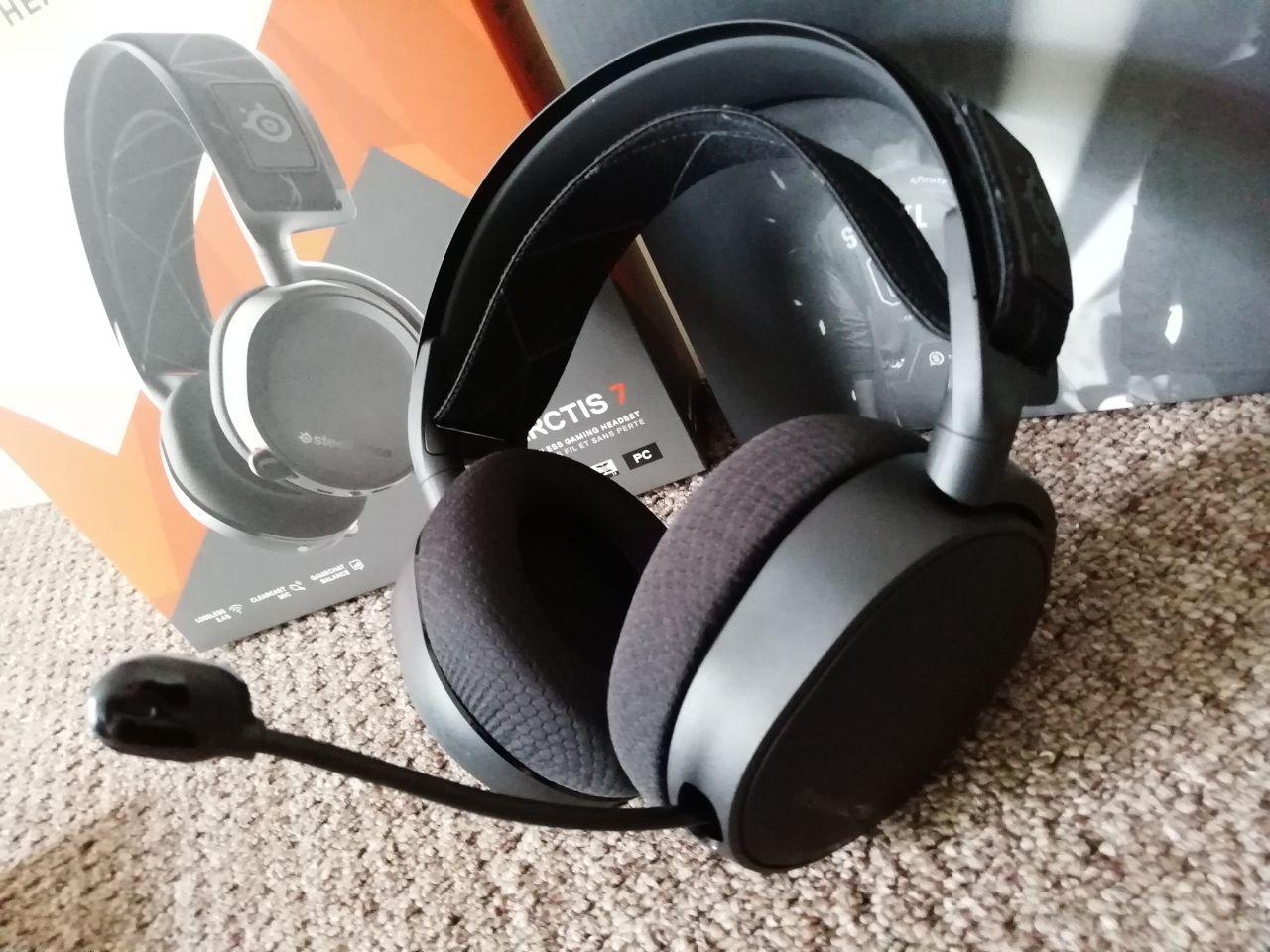 Despite lacking your typical gaming trademarks, it's here where the Arctis 7 really does shine. To put it simply, everything sounds as it should; no particular aspect felt enhanced or overemphasised. This normalcy is exactly what I want, especially when it comes to games. Earphones I've used previously have been hit and miss, my most significant irritation being a focus on bass and the efforts to enhance it to varying degrees of success. I don't think you'll be surprised putting these on. There's nothing to stand out and really take your breath away, it's just the sound you expect to hear wirelessly in your ear, and that's fine. Thanks to the 2.4 GHz wireless transmitter, latency is all but unnoticeable. Jumping from Super Smash Bros Ultimate, to Mario Kart 8 Deluxe, to Detroit on the PS4, and even watching films on my laptop, I noticed no discrepancies. Lips were synced, smashes were satisfying, even jumping on Taiko I was hitting the notes to the same degree my ability would dictate.

Connecting the headset to your system of choice ranges from plug and play to plug a few things in and play; it's simple, but not entirely intuitive in places. On a Windows PC, you plug in the dongle, let it do its automatic setup, and you're done. You can turn on the headset to find it already paired to the dongle, and two audio channels visible in Windows, one for game audio, and one for voice chat. Of course, you aren't limited to just these. With them being two plain audio channels, you can put any programs you want onto any channel and balance them at your will. For people who stream games and like to watch videos when they're live, this dual channel setup can be utilised to keep all the miscellaneous video audio to your ears only, assuming you setup your software of choice to only take audio from the game channel. For consoles, it's a little bit of a mixed bag, but even at its worst it isn't necessarily complex. With a PS4, it's as easy as Windows; plug and play. It's detected as a headset when you plug in the dongle, and you're good to go. The Switch, on the other hand, was a little irritating. Under compatibility on the Arctis 7 product page, it lists the Switch as compatible with wireless usage via USB in docked mode—technically speaking this much is true. You plug the dongle into the dock for power. What it fails to specify is that the Switch won't detect it as a USB audio device. Instead, you'll need to pick up a male to male 3.5mm wire and plug it into the Switch and the dongle. This wire is oddly not included with the headset. Once you've plugged in these extra cables, it works as you'd expect; I might add you can do the same with any device assuming the dongle is powered. As a general feature, it's great, but I'd have preferred it a little better explained when it came to the compatibility listing, and including a 3.5mm wire would obviously have been ideal. 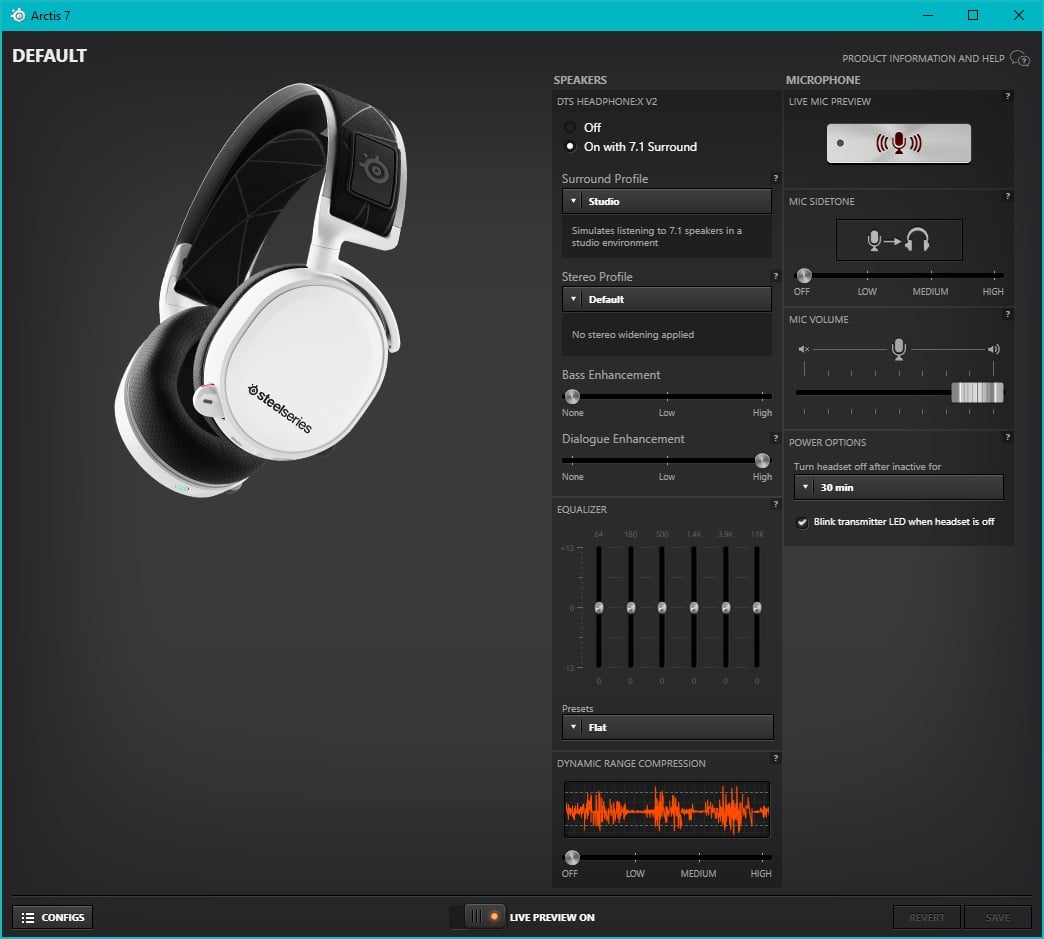 I like my audio to be clear and accurate, but for those wanting a little more control, SteelSeries Engine 3 has you covered. With this software, you can get down and dirty to get the sound just right for you, with options including bass enhancement, dialogue enhancement, and a standard-looking equalizer. As you fiddle with the settings your changes are previewed, allowing you to quickly get things as you like them with your audio playing in the background. You can save a seemingly-unlimited number of configurations, and even set them to enable on the launch of specific applications. Got a preferred sound for films? Enable it when you launch Media Player Classic. Really want to feel your engine revving in your sports racing game of choice? Get a config setup and launch it with the game. The software is really quite sleek and simple to use, and a nice thing to note is that these changes seem to save to the wireless dongle. Obviously you shouldn't expect it to start switching between your configs, but if you want an unreasonable amount of bass to accompany your nightly Fire Emblem session, you'll be good to go. With this seemingly saving to the dongle however, none of these changes are carried over should you decide to use the headset in a wired capacity. That being said, I think the standard setup is fantastic.

The microphone is attached to the left ear cup and easily retracts when not in use. You also have a button to toggle whether it's muted, this visualised by a red light on the microphone itself. This design works nicely in letting you easily see its status without having to fiddle or keep hitting buttons asking whether the person on the other end can hear you. Spending some time talking with Chary over Discord, she could hear me clearly and even questioned whether I was using this headset or my standalone Blue Snowball.

The Arctis 7 succeeds in every essential area for a gaming headset, but it's in this focus a more generalist buyer may be put off. The lack of both noise cancelling and isolation are in my opinion its two greatest flaws. These aren't headphones I'd be comfortable wearing on a bus or train, not for the detracted microphone still slightly visible, but for the fear of being a nuisance to those around me. It's as though you have two speakers next to your ears, which is obviously true, but I'm at a loss as to how better describe it. Aside from this, the headset also lacks Bluetooth connectivity, relying solely on its 2.4 GHz dongle for wireless and the option for a more widely compatible 3.5mm wired connection for those lacking the required USB port.

You can find the complete specs for the product below, as described by the official product page. 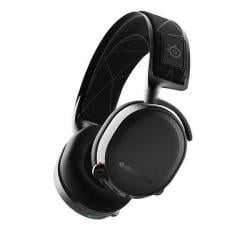