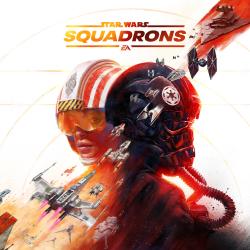 Dogfight! Star Wars! VR and HOTAS support! With these features, Star Wars: Squadrons offers a premise that surely sounds enticing; but does it take flight without any turbulence?

Set after the events of Star Wars: Return of the Jedi,  Star Wars: Squadrons puts you in the frontline of the Galactic Civil War; more specifically, in the pilot seat of starfighters. You will get to experience the War on both sides of the force as you alternate between up-and-coming pilots of the Galactic Empire's Titan Squadron and the New Republic’s Vanguard Squadron (two different pilots; no double agent work going on here). It’s presented in an original plot that touches on the back stories of this title’s recurring characters and builds on their motives for forging ahead their respective factions’ vision. But it does not feel totally unfamiliar as it shares the lore of the Star Wars franchise and even features cameos from familiar characters such as Hera Syndulla, Admiral Rae Sloane and even brief appearances of Darth Vader and Princess Leia. 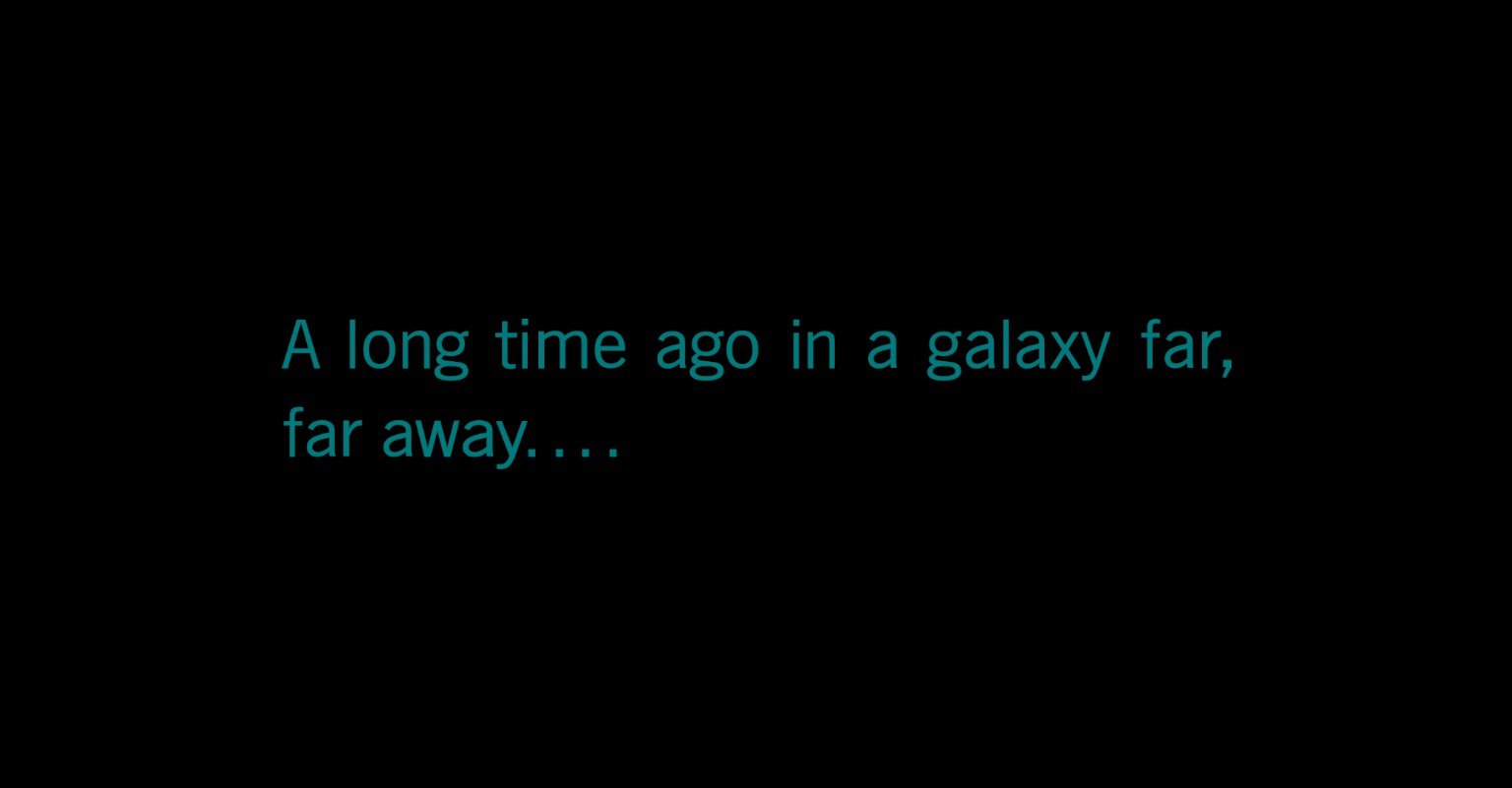 I found the approach to play as a pilot for both the Galactic Empire and the New Republic to be quite original as it helps to give an idea regarding the other side’s tactics and even the stark differences in their philosophies. It was also quite interesting to play on one side for a mission and for the next one, play as a pilot for the other side tasked to shoot down fighters you called allies only moments ago. And yes, it’s also very divisive, especially in missions where you’re tasked to shoot down escape ships full of civilians. It’s not a common approach in video games to put the player in the shoes of both good and bad guys in the same game, and the developers treaded on thin ice with the alternating perspective. I came to terms with it as a work of pure fiction but I could see it become an issue for others. 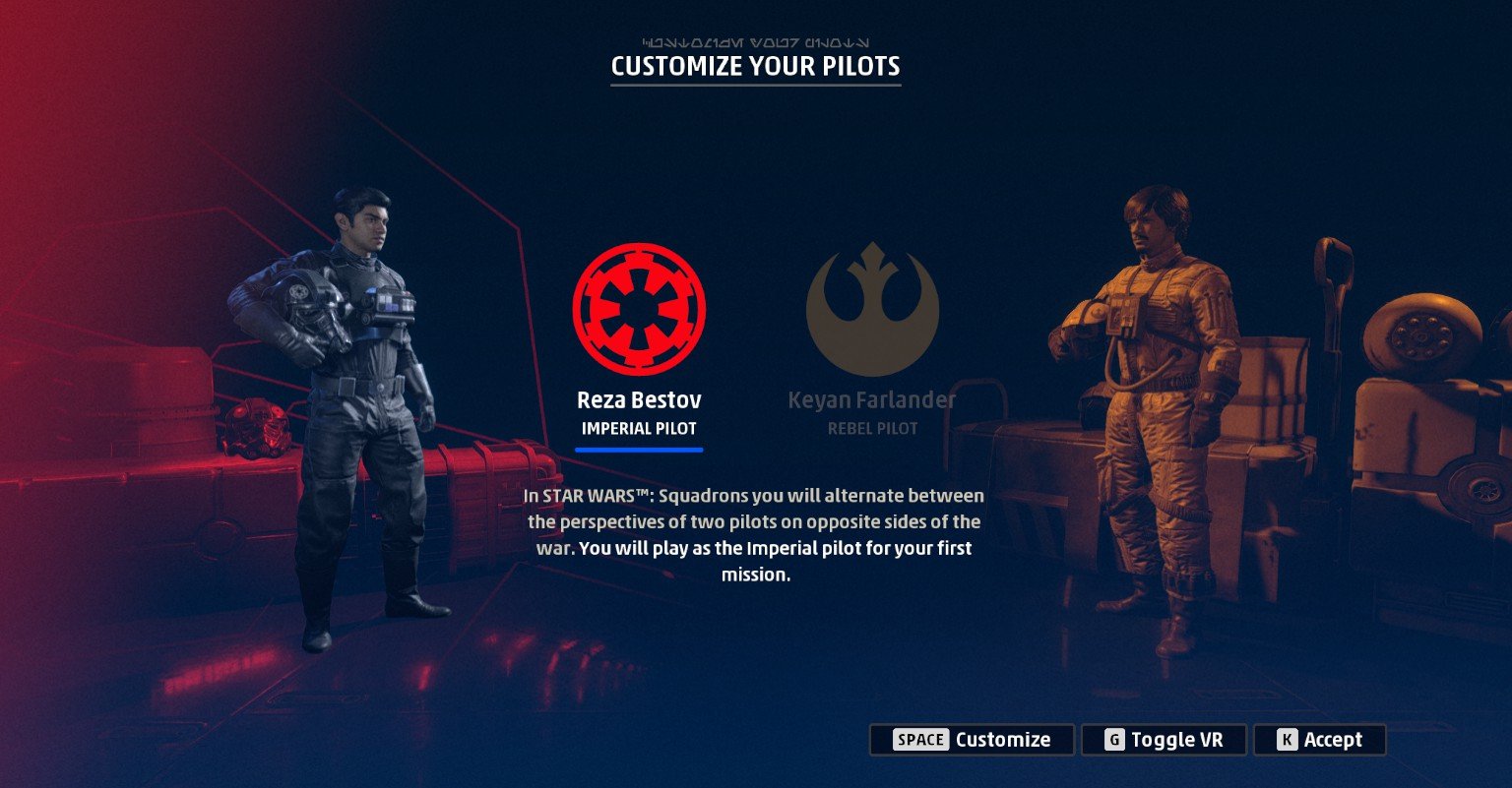 But whichever side you play in, it will involve similar mechanics to maneuver your spacecraft and pew-pew your enemies with sci-fi bullets to death. Prior to engaging in a mission, you’ll be able to customize your weapons, hulls, engines, shields, and more that would be best suited. Some missions even allow you to choose among classes of starfighter to pilot (TIE Fighter, TIE Reaper, X-Wing, Y-Wing, and more specific to each side); each of which have unique stats and loadouts of their own.

Once unlocked, you can also use Squad Commands to instruct your wingmates to chase some enemies while you off another or take a breather, or even join forces to corner a nimble pilot. You’ll also have to make effective use of your loadout, request for resupply, know when to shift energy to your engines for a speed boost or shift it towards your weapons for optimal damage; all while staying in motion and weaving side to side as you fly in order to stay alive. This strategic and multi-factorial aspect to handling missions delineates Squadrons from a simple shooter. It can get quite hectic and needs an adjustment period but even someone like me, with no particular interest in flight action games, got really hooked to this one rather quickly. 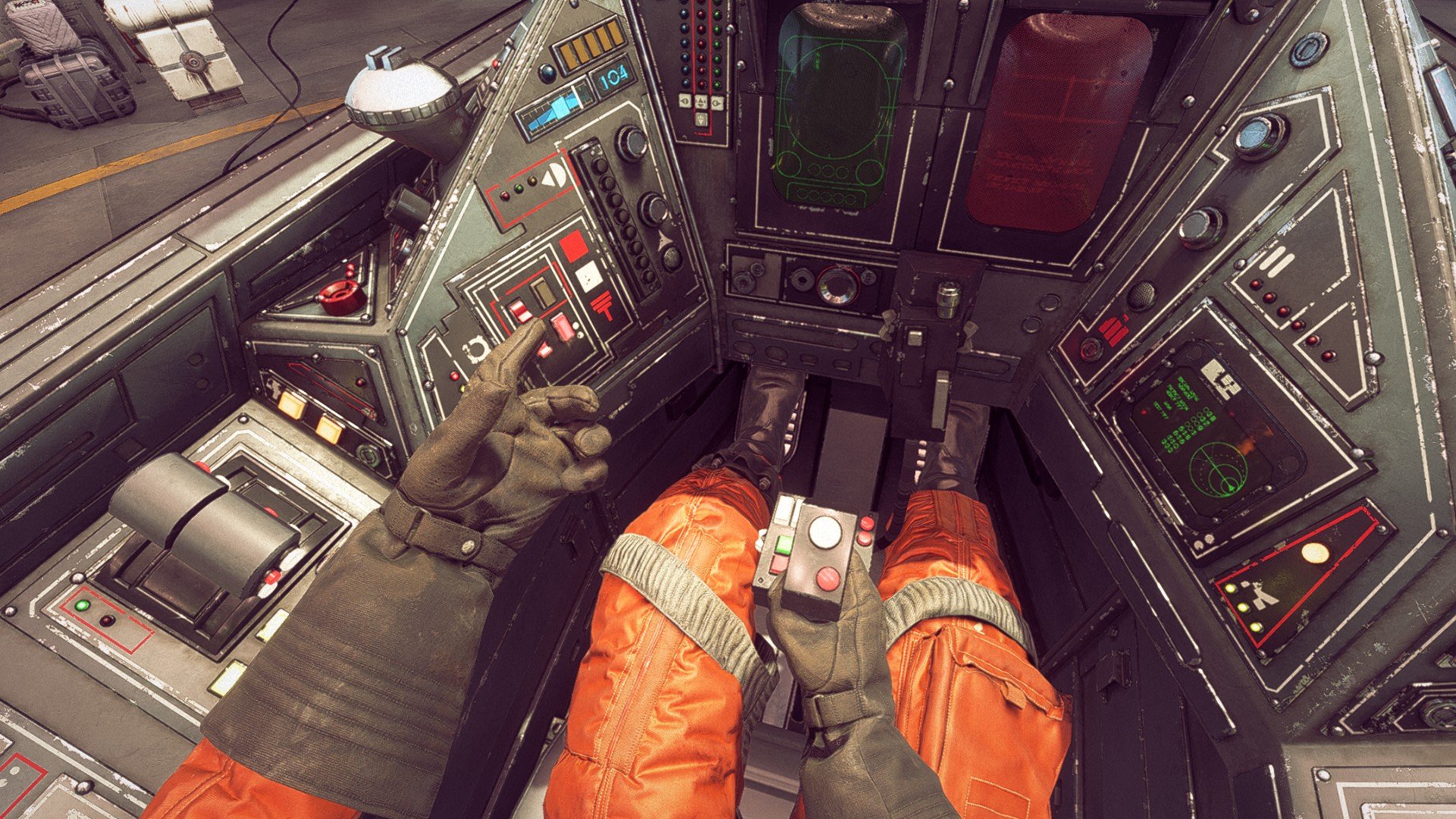 For me, Star Wars: Squadrons was particularly enjoyable thanks to its VR support. Seeing the cockpit instrumentation up close, taking in the sight of alien planets, waltzing across debris, having enemy shots fly past and cracking the cockpit’s windscreen were really sights to behold. Indeed, Star Wars: Squadrons offers good spectacle whether you play it in FPS or VR. It doesn’t support VR controllers but I enjoyed it with a controller thoroughly. The game does have HOTAS support and I am sure it will certainly add to the immersion. If you have a compatible VR headset, I highly recommend using it to play as it really succeeds in emulating the experience of a starfighter pilot in the Star Wars universe. Outside of dogfights, the busy hangars where you’ll get mission briefings also breathe some life into the universe, even if only slightly. You can’t roam freely in the hangar as it’s mostly a point-and-click experience that allow you to join in conversations among your team to build on their backstories and the plot; but that’s not the focus of the game anyway but is here to help put a face to the names you’ll be hearing while in your cockpit. 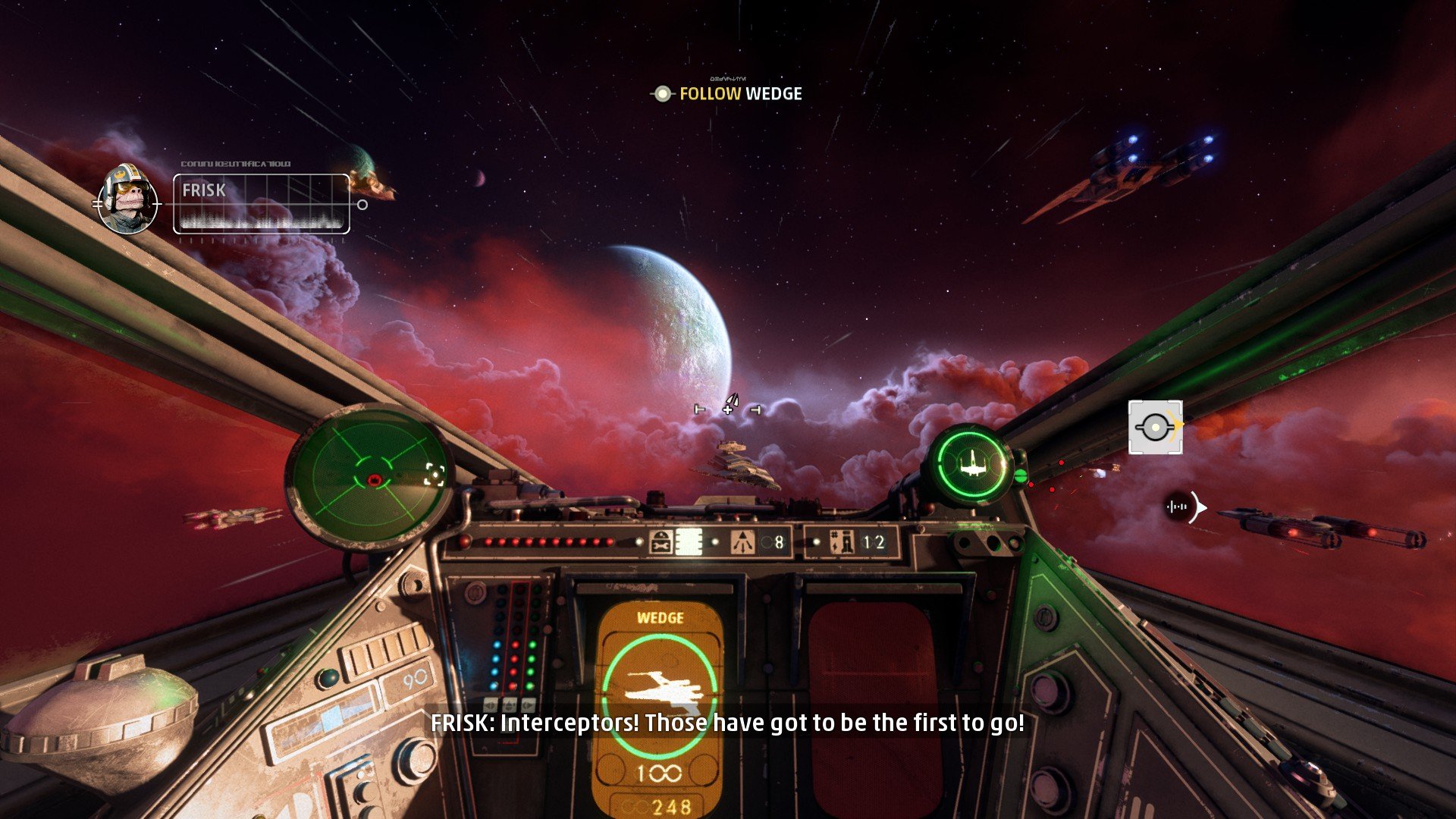 What’s evident when playing Squadron’s 14 single-player missions is that they mostly revolve around the same aim: chase after enemy starfighters, escort allies and defend others, or, as is often the case, missions evolve from having one aim to incorporate a mixture of these objectives. While it might sound repetitive, the way it's executed is not. That’s because being in the vast expanse of space, you can maneuver your X-Wing/TIE Fighter and shoot down opponents from literally any angle and pair it with different strategies. You can opt to take on enemies solo, make extensive use of Squad Commands, take a more cautious approach by shielding behind capital ships or mix and match these strategies and more to your liking. The point is to emerge victorious so you can hyperdrive to safety upon completion of the mission and it’s frankly thrilling to do so in fast-paced dogfights, even if some missions aren’t so memorable.

Nevertheless, the single-player mode does set the pace as to what to expect of the multiplayer mode. There’s the 5v5 dogfight mode which is essentially a deathmatch where you have to take down as many opponents as possible. It requires some coordination with your squadron, which isn’t always optimal or even possible but when it works, it can prove to be fun. Then there’s the fleet battle mode which also pits 5 players on the New Republic side against 5 players on the Empire side who have as ultimate goal the destruction of the opposing team’s flagship. It differs in that it is multi-stage and objective-based, requiring each team to penetrate through the other’s defense line before taking down the flagship. It’s more engaging than the dogfight mode and is easily my favorite mode but the experience still relies on proper coordination with your teammates. Additionally, proper teamwork will rely on a decent mastery of the controls and this might take some time to get a hold of. 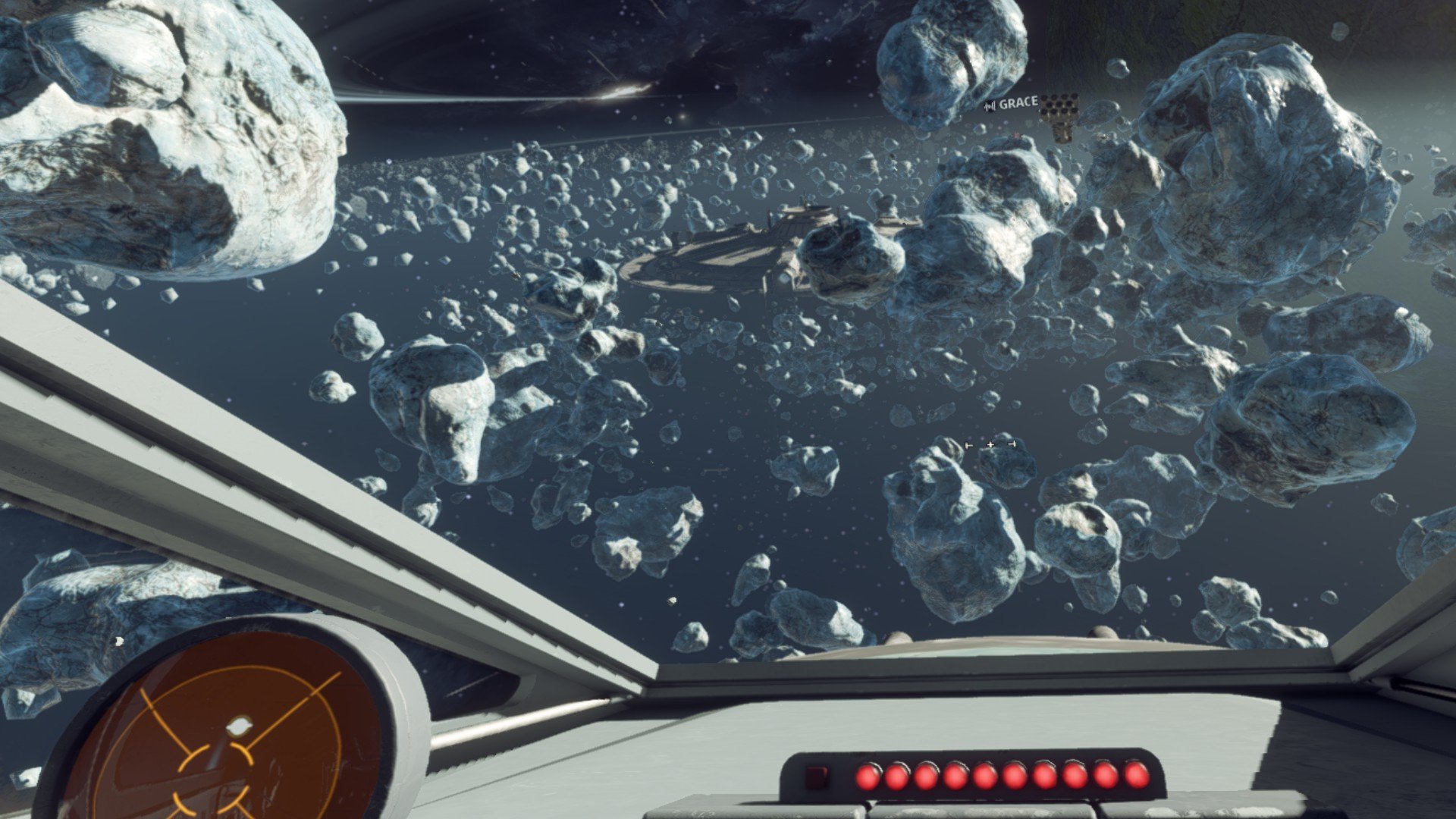 My Star Wars: Squadrons playthrough was almost entirely in VR with my Oculus Quest & Link cable combo, and it was not a nausea-inducing experience as I thought it would be, despite the game’s fast-paced actions. However, VR support on Steam is wonky with unexpected crashes, without any error message to help in troubleshooting. There were several such reports among the community, meaning that it's an issue with the game itself. To fix it, I’ve had to tinker with the settings and it would have gone a long way to have it optimized from the get-go.

Another bug that I came across was at the very first mission where I had to follow my wingmate Gunny but we ended up following each other in circles, without any progress being made. The only fix was to restart the mission.

A persisting issue is the awful load time. Booting the game either in VR or FPS mode takes a good 10-15 minutes for no reason, while loading up missions from the main menu takes less time but the load time is still noticeable. 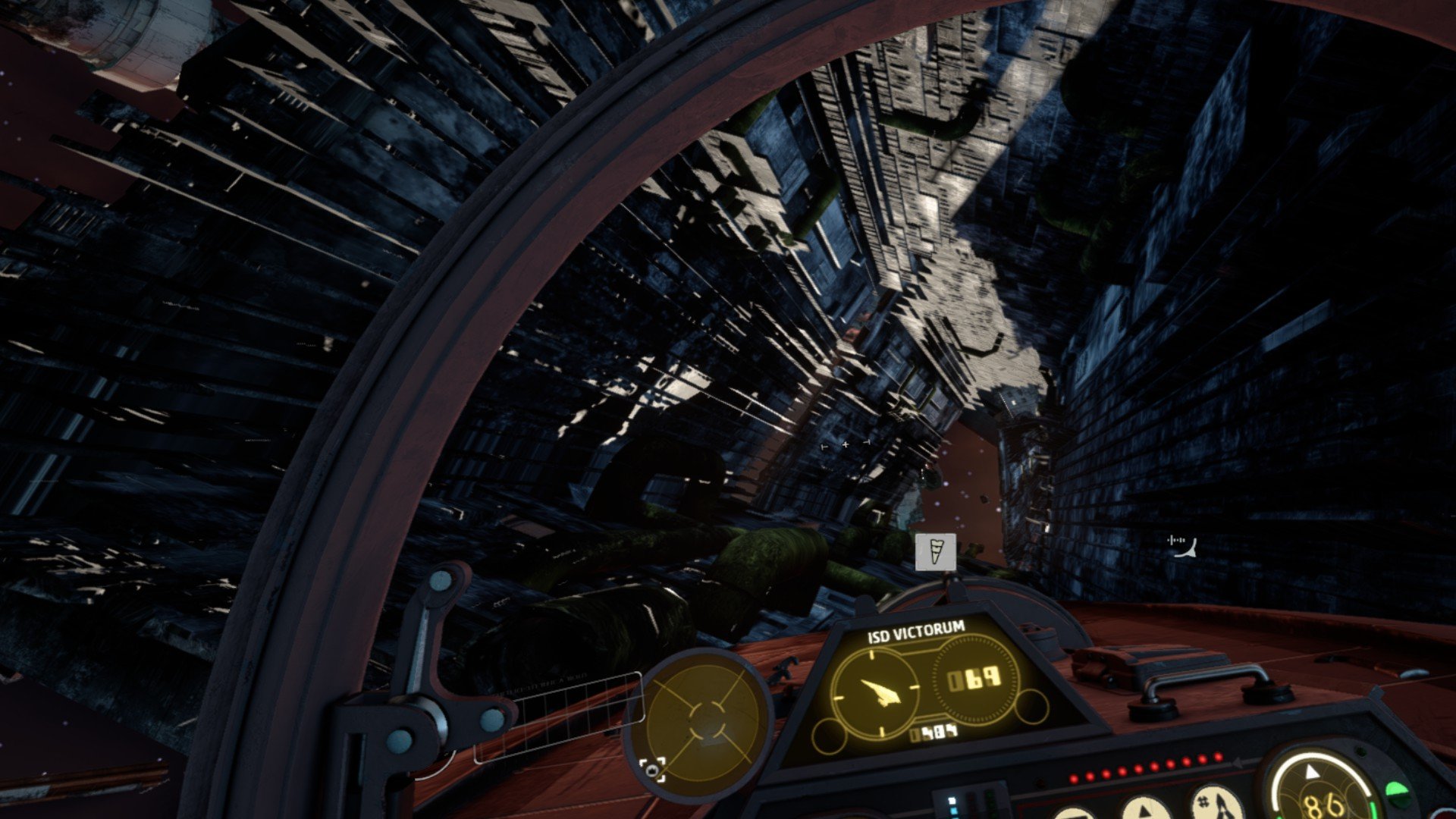 What’s interesting with Star Wars: Squadrons is that, despite being an EA game, there are no microtransactions involved. There’s no DLC planned even, so you get a complete package for what you pay for and, bugs aside, it’s quite a compelling package; and a promising way forward for EA and the Star Wars video games franchise.