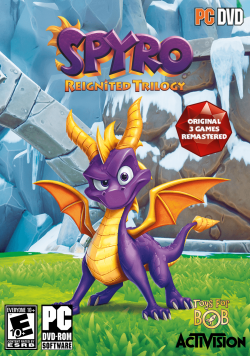 Spyro’s back, and he’s not in a toy to life game! Up for review here is the Spyro Reignited Trilogy PC port! 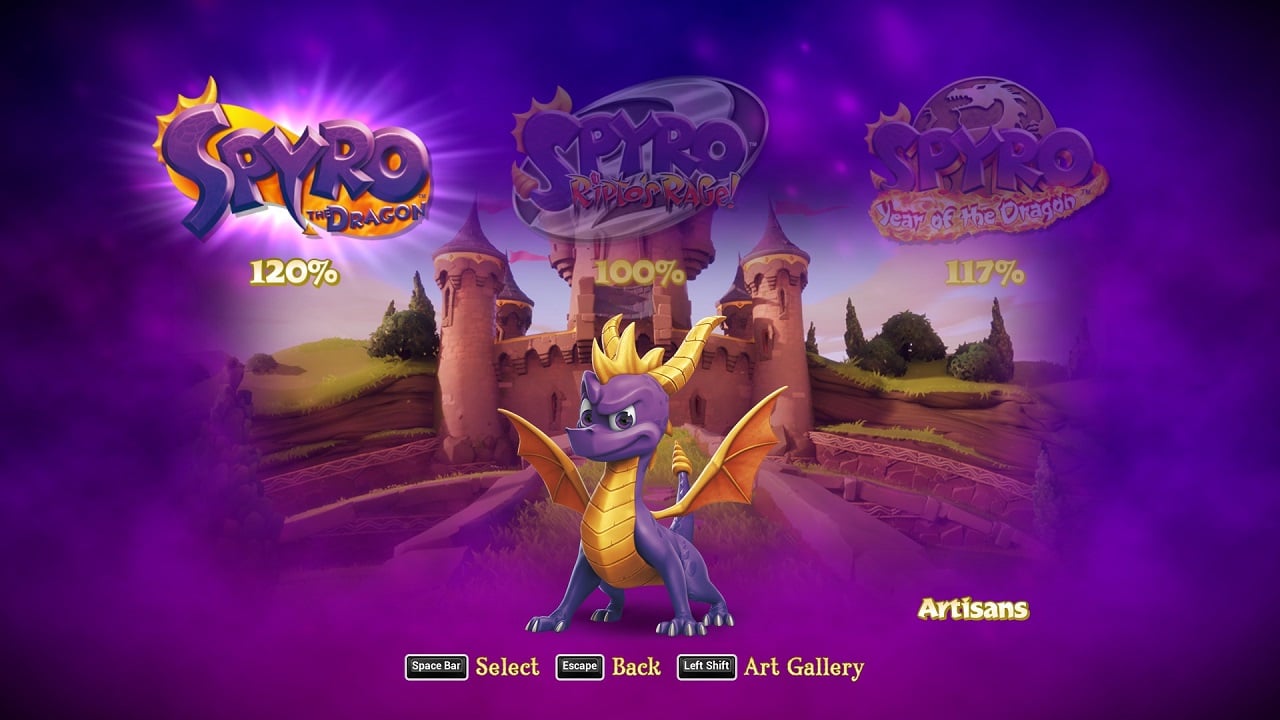 Originally released on November 13th, 2018, the Spyro Reignited Trilogy has finally been ported to PC, with the main upgrades from the console versions being support for multiple resolutions and an unlocked framerate. Like the Crash N. Sane Trilogy, the Spyro Reignited Trilogy features the original Spyro the Dragon games from the PS1 era in a “from the ground up” complete remaster using Unreal Engine 4. Sounds great, and it really is! But, like the Crash N. Sane Trilogy, this remaster has its share of issues. But before we get into those, we’ll begin with the basics of the Reignite Trilogy. 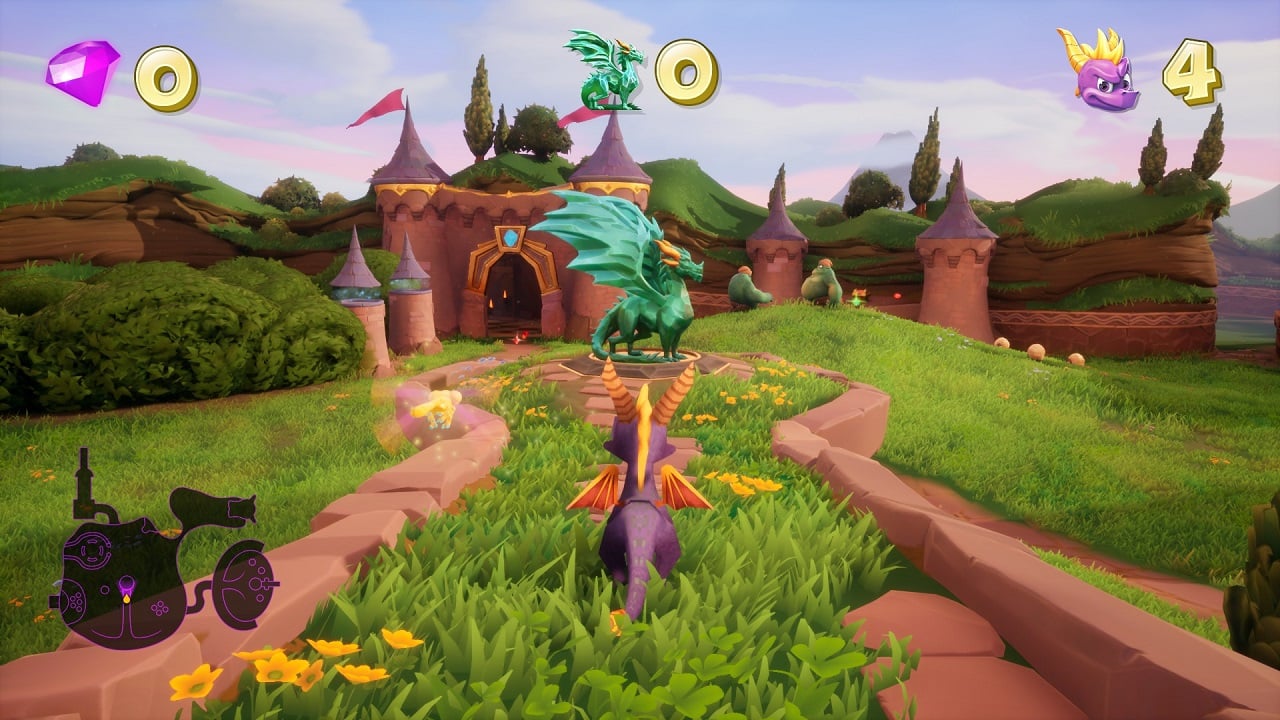 As noted previously, Spyro Reignited Trilogy features the three original Spyro the Dragon games: Spyro the Dragon, Spyro 2: Ripto’s Rage, and Spyro: Year of the Dragon. Each game in the series is a 3D platformer, originally developed by Insomniac Games for the original PlayStation. Each game follows the...tail...of Spyro, an adolescent, snarky dragon and his companion Sparx the Dragonfly as they hunt down the usual big, evil boss that’s causing amuck in the various games, from Gnasty Gnorc to Ripto to...Sorceress. Yeah, names are hard. Getting around in the Spyro games is simple. Each game features a series of hub worlds with individual levels separated by portals which Spyro flies through. Like most 3D platformers of the era, during each level you’re tasked with collecting one thing or another to advance the story: dragon statues in the first game, orbs in the second, and dragon eggs in the third, along with gems which act as a kind of currency in the games that are strewn about each level on their own or in containers. In terms of combat, the Spyro games are rather simple. You can shoot bursts of flame, which is required for most larger enemies, or you can charge smaller enemies and knock them out of your way, and that's kind of it. You'll come across a few power-ups and abilities throughout the games, including temporary buffs like supercharge, flying, or flame bursts or more permanent abilities such as being able to head bash and climb walls. The 3D platforming is where the game really shines, with a gliding mechanic that allows Spyro to cross gaps to continue on with his adventure. But, if you’re a Spyro fan, you already knew all this, so let’s get into the actual changes that the Reignited Trilogy offers.

There is, of course, the obvious: the complete graphical and style overhaul. Each character, level, and texture in the games was redesigned from the ground up and include much more detail and personality thanks to the power of modern hardware. Then there’s the audio in general; the music (originally composed by Stewert Copeland, drummer for The Police, and easily one of the best game soundtracks of the period) was slightly remixed by the Toys for Bob devs with some help from Copeland, and remains mostly faithful to the original soundtrack which thankfully still sounds pretty great. But, if you’re not a fan, you can always swap back to the original tracks any time in the game menu which is a much-appreciated addition. Then there’s the voice acting...which isn’t so great. While Toys for Bob were able to get most of the original voice actors together to re-read some lines, what they ended up producing unfortunately lacked a lot of the “enthusiasm” and personality from the characters that was quite missed here, and particularly the new “surfer brah” Hunter was easily my least favorite change here.

In terms of core gameplay mechanics, the Reignited Trilogy plays almost exactly the same as the original trilogy, but with the game being updated to use Unreal Engine 4, there are a quite a few mechanical differences that are...mostly unwelcome, in my opinion, and in most cases ends up being fairly broken. First, and most important, is the physics. Like the Crash N. Sane Trilogy, the physics and various hitboxes for the world are completely changed and revamped to fit modern standards. And, like the Crash trilogy, they made a complete hash of it. The biggest issue is mainly that I found myself missing numerous glides and jumps in all three games that I am 117% sure I can make on the original games (as I’ve been a massive Spyro fan since the wee age of seven, and replay the trilogy at least 3-4+ times a year). Another issue that’s specific to the PC port of the game is the way some animations and physics are possibly tied to the framerate of the game. A lot of early reviews and Reddit posts have complained that, if the game runs above 60fps (or, in some cases, even above 30fps), animations and some physics can get a tad glitchy and broken…but I experienced none of the mentioned issues others have faced while playing the game during launch at 120-144fps on my Freesync monitor, so your mileage may vary.

Then, there’s hovering, which has been “tweaked” (and by tweaked I mean ruined). In the original release of the second and third games, you used to be able to insta-hover after jumping or gliding for half a second, and you used to be able to hover when up against a wall while gliding. This would get you a little bit of extra height with your glides/jumps, which is quite useful for reaching some of the difficult ledges and areas that hide a few gems or items needed to 120%/117% the game. In the Reignited Trilogy, however, you have to glide a set amount of time before you can hover, and you can’t hover if you’re even lightly touching the hitbox for a wall or a ledge. The result is that, 99% of the time you really need to hover, like say when gliding between platforms above a bottomless pit and you need a little extra height to land on the edge...you just drop out of the sky and plummet to your death, because you were slightly too close to the edge of the hitbox. Probably 99% of all the deaths I’ve experienced in each game in the trilogy can be accounted to these awful physics and hover “upgrades”, and has added nearly 30+ minutes to my personal '100% speedrun' times. The camera, which was already a bit wonky in the PS1 era, is much more noticeable wonky today, although whether that’s because nothing has changed at all or something did change but isn’t that noticeable, I couldn’t say. I did find myself getting used to it fairly quickly once I got into the swing of things, so this shouldn’t be much of an issue.

That all said, do I think the Spyro games have aged particularly well, even with all the little changes and tweaks they made to the games? Personally, yes, even if I’m not the biggest fan of those changes. In my opinion, even the original games have aged wonderfully compared to other early 3D platformers, and despite a few nitpicks here or there I believe the Reignited Trilogy is also worthy of the occasional playthrough as well, whether you’re a Spyro fan or a newcomer to the series. Just make sure to avoid the rest of the games in the series--we can just forget those exist.