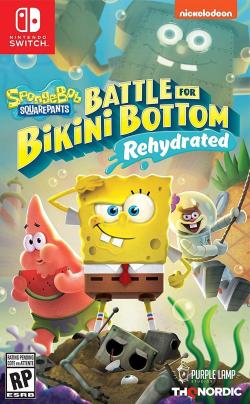 One of the few truly beloved licensed games, SpongeBob SquarePants: Battle for Bikini Bottom returns with an enhanced HD remaster. Does it hold up today or were those memories better left at the bottom of the sea?

Licensed games have, deservedly, a bad rap. They’re often farmed out to the cheapest bidder, landing them at studios with no passion for the property. But when they work, they tend to stick with people. Maybe it’s only because it’s rare to see a licensed game this good, but SpongeBob SquarePants: Battle for Bikini Bottom has had an enduring legacy. Originally released in 2003, it’s remained in the conversation of the best licensed games of all time, still enjoys an active speedrunning community, and has had fans clamouring for a remake for years. Those prayers have finally been answered with Battle for Bikini Bottom Rehydrated. 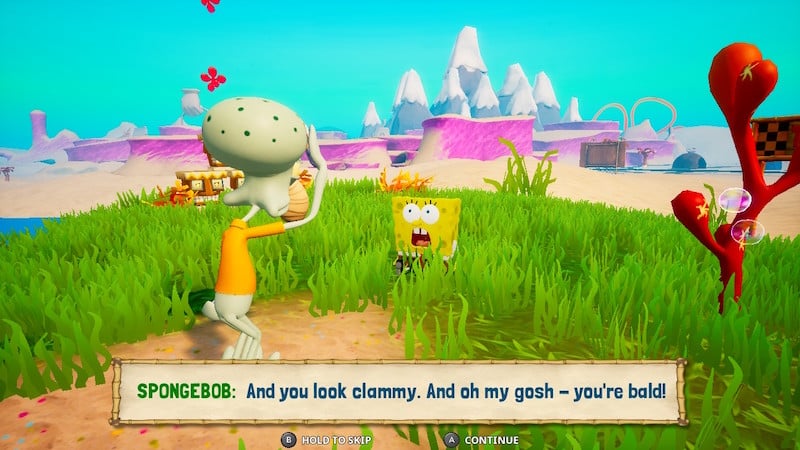 The first thing that stands out about Battle for Bikini Bottom is the clear love the producers had for SpongeBob as a series. I’m not quite sure who wrote the game’s script, but it feels like it came right from the show’s writer room. It’s full of smart gags and some good-natured absurdity, with plenty of fun visual jokes dotted around the map. It uses the show’s world well and visits plenty of locales, both obscure and familiar, and cleverly uses Bikini Bottom as a hub world to let you explore places that aren’t big enough to be a full level, but also couldn’t be excluded, like the character’s houses or the Krusty Krab. Yet, even though it indulges in the series’ history, it isn’t afraid to forge its own identity either, inventing new characters and having its own running gags, rather than simply regurgitating what worked in the show. The Rehydrated visuals come in handy during dialogue scenes especially, lending a little extra expressiveness that can help sell the jokes (though the stiffness of the models just standing there is a little distracting). If you’re a fan of the early era of SpongeBob before Stephen Hillenburg left the show, this will grab you the same way.

Battle for Bikini Bottom is less successful as a game than it is a SpongeBob property, but it holds up well enough that it’s still worthwhile. The setup is fairly standard for 3D platformers—explore the Bikini Bottom hub world to access different levels, each of which have two different types of collectables to find and eight objectives to complete as SpongeBob and either Patrick or Sandy as a secondary character, depending on the level. Truthfully, there’s nothing much to write home about here, but everyone is executed well and there are some smart points that keep it from being too bland. For example, the first objective you receive in a level will often take the entire level to complete, which gives a nice sense of direction and makes finding the other objectives more organic. The characters all behave similarly enough that you can usually make it through the majority of the level as your favourite, but they still feel distinct enough that the difference is meaningful. If you find an objective that does require a certain character, there’s usually a swapping point placed conveniently nearby, meaning you don’t have to do any tedious backtracking, or have to constantly compile a list of things you need to revisit as certain characters to see everything. There’s a decent variety to the objectives—most are exploration-based, but there’s some good ones that focus on combat, puzzle solving or a few different minigames that recur throughout. Still, it can get a little repetitive if played for long periods of time, so you’d be best advised to break it up into shorter sessions. 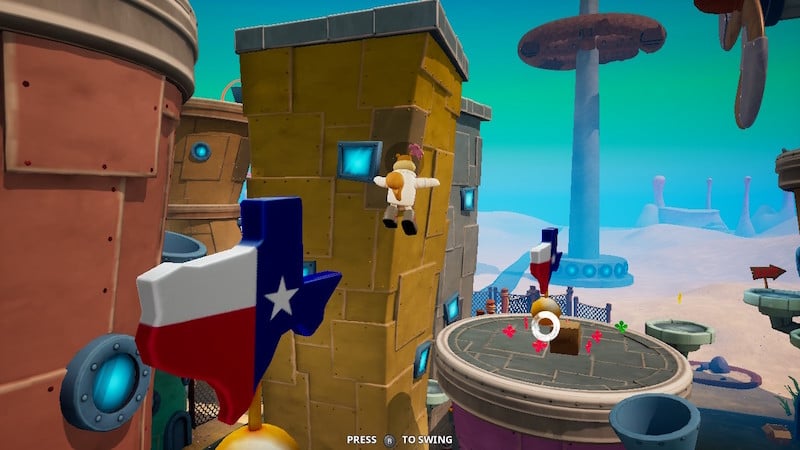 The Rehydrated version has a few new features, mainly a multiplayer horde mode. It’s a weird idea for a 3D platformer, and it really isn’t saved in the execution. You and a friend fight through about 75 waves of enemies, which is already upsettingly long, but it’s only made longer by the fact that there’s no real challenge. Never mind that the first two thirds of the horde mode are laughably easy, once you hit the latter waves (where the only difficulty is in keeping track of your character among the sea of enemies), you’ll realize there’s no way to lose your progress. If one player dies, they only have to wait a few seconds before respawning as long as the other player is alive. If both die, the wave simply resets. There’s no lives and no limit to the number of times you can do this. It may be suited to a score attack gameplay style, but it takes too long to get through a run for that to be practical. Bizarrely, this mode also has no music or quips from the characters, making it an even more somber affair.

It’s worth mentioning as well that there were some performance issues with the Switch port. While it’s perfectly playable, there was a sluggishness to the movement that took some getting used to, and later levels that feature more enemies on screen at once caused some severe framerate drops. Unfortunately, these types of issues aren’t exactly uncommon for Switch versions of third-party games, and since that’s the only version we’ve been provided, I can’t say whether the PC and other consoles will be affected by them as well. Still, performance-minded fans should probably wait for more robust cross-platform testing to be available before committing to the Switch version. 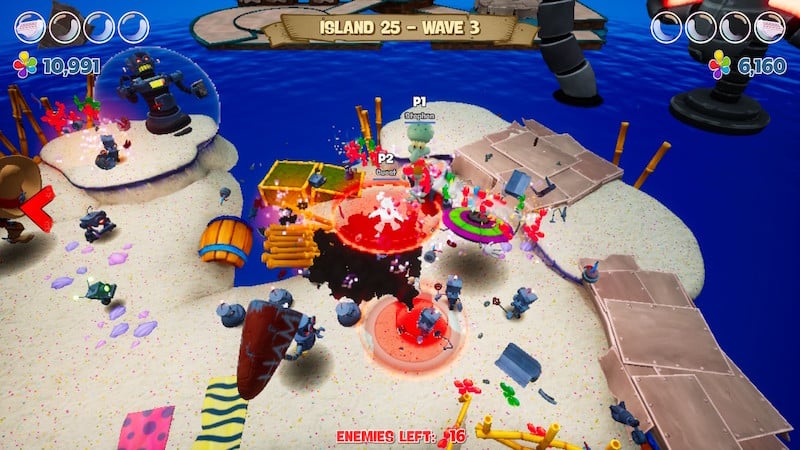 Battle for Bikini Bottom Rehydrated accomplishes what it sets out to do—bring a beloved classic into the present day—but doesn’t push itself much beyond that goal. The minor improvements to the UI and camera help it feel a bit more modern, but ultimately, this is another 3D platformer from an era that was lousy with them. It stood out from the crowd in 2003 because there were so many mediocre and outright bad ones back then, but with the genre now belonging to more inspired titles like A Hat in Time or Super Mario Odyssey, this game just doesn’t have the same charm or ingenious level design. If you’re a hardcore fan of 3D platformers or SpongeBob SquarePants, this will scratch that itch. If, however, you’re interested in trying this game based solely on the reputation it’s earned, it won’t have the same impact when played nowadays.